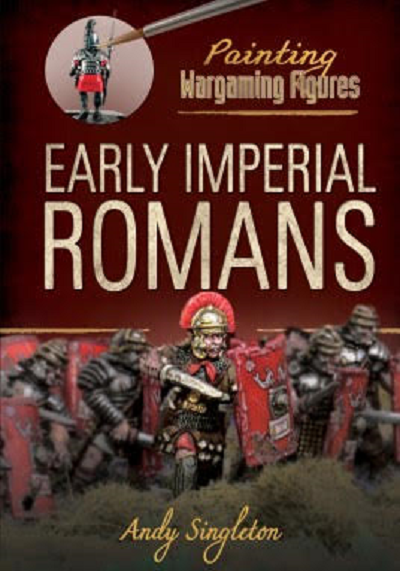 MSRP: $22.95
​Andy Singleton has been modeling and painting most of his life and has been a professional commission figure painter for some years now.

Here he shares his experience and tips of the trade with those collecting Early Imperial Roman figures. The emphasis is on achievable results ad practical advice that is applicable to painting units or whole armies for wargaming purposes in a reasonable time frame, not on spectacular individual display pieces.

Most of the figures featured in the 177 color illustrations are either 28 or 25mm, but the techniques described are easily adaptable to smaller sizes and both plastic and metal figures are covered. Andy’s clear, step-by-step guidance takes the reader through the process from the initial preparation and assembly of the figure, to finishing and basing.

Themed chapters cover armor, weapons and equipment, clothing, skin tones, shields and horses. All together it contains all the help you need to recreate your own legions of this most iconic army in history.

A list of all the model companies that make kits of the figures and equipment in all the available scales.

Andy Singleton has been modeling and painting since childhood, having built subjects across a wide range of subjects, scales and genres. In 2014, Andy decided to stop having a proper job and picked up his brushes full time to become a professional figure painter, with his business Volley Fire Painting Service.

In addition to painting legions of figures, he has worked with many manufacturers across the industry and examples of his work can be found in many rule books, magazines and websites. Andy is also a co-host on the podcast “A few Brits and the Hobby”.

This book will be of great interest to wargamers. Highly recommended.

I want to sincerely thank Casemate Publishers, the North American distributor of Pen & Sword books for this review sample and the folks at Pen & Sword. All Pen & Sword titles can be seen on Casemate’s website at:
www.casematepublishers.com