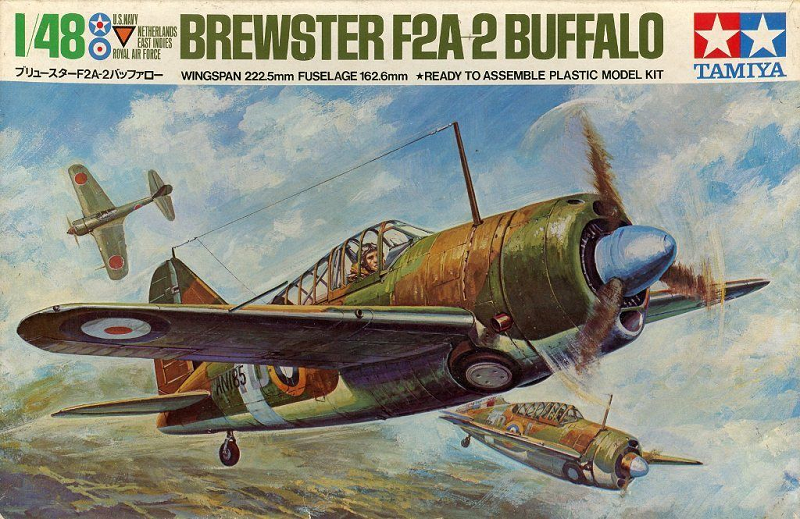 Kit no. MA119
By Ray Mehlberger

My kit is out of production.

The Brewster F2A Buffalo was an American fighter aircraft which saw service early in World War II. Designed and built by the Brewster Aeronautical Corporation, it was one of the first U.S. monoplanes with an arrestor hook and other modifications for aircraft carriers.

The Buffalo won a competition against the Grumman F4F Wildcat in 1939 to become the U.S. Navy's first monoplane fighter aircraft.

Although superior to the Grumman F3F biplane it replaced and the early F4F's, the Buffalo was largely obsolete when the United States entered the war, being unstable and overweight, especially when compared to the Japanese Mitsubishi A6M Zero.

Several nations, including Finland, Belgium, Britain and the Netherlands, ordered the Buffalo. The Finns were the most successful with their Buffalo's, flying them in combat against early Soviet fighters with excellent results.

During the Continuation War of 1941–1944, the B-239s (a de-navalized F2A-1) operated by the Finnish Air Force proved capable of engaging and destroying most types of Soviet fighter aircraft operating against Finland at that time and achieving in the first phase of that conflict 32 Soviet aircraft shot down for every B-239 lost, and producing 36 Buffalo "aces".

The British attempted to lighten their Buffalo's by removing ammunition and fuel and installing lighter guns to improve performance, but it made little difference.
After the first few engagements, the Dutch halved the fuel and ammunition load in the wing, which allowed their Buffalo's (and their Hurricanes) to stay with the Oscars in turns.

The F2A-3 variant saw action with United States Marine Corps (USMC) squadrons at the Battle of Midway. Shown by the experience of Midway to be no match for the Zero,[2] the F2A-3 was derided by USMC pilots as a "flying coffin.".

However, the F2A-3's performance was substantially inferior to the F2A-2 variant used by the Navy before the outbreak of the war despite detail improvements.

The box art shows 2 Buffalo's being chased by a Zero. They are both in a pattern of dark-green and stone over a light-gray under-carriage.

The Buffalo in the foreground has a blue spinner, a white fuselage code of TD roundel V, followed by black serial no. AN185.

The other Buffalo has a blue and green spinner and a gray fuselage code of TD roundel I.

The Zero is banking and showing its top only. It is dark-green with yellow wing leading edges.

One side panel shows a color profile of a Buffalo that is in a wave pattern of very dark-green and mid-stone over a medium-gray undercarriage. It has a white fuselage no. B-396, followed by the Netherlands's orange triangle insignia and a paragraph in Japanese and a illustration of a pilot wearing a tan shirt and shorts over gray knee-socks.

He has a leather pilot's helmet on his head with goggles and MADE IN JAPAN.

The kit contains 4 light-gray trees, a clear tree and the decal sheet in a sealed clear cello bag and 2 instruction sheets.

The first instruction sheet consists of a single-sheet folded in half to fit the box. It is large, at 22" x 8" in format and all in Japanese only.

The face side has a black and white photo of the model made up in the box art scheme, with the pilot figure standing in front of it. He has his right arm raised.

This is over the history of the Buffalo, also all in Japanese and there are painting and marking instructions for 3 schemes on the right.

There is a 3-view for each scheme: 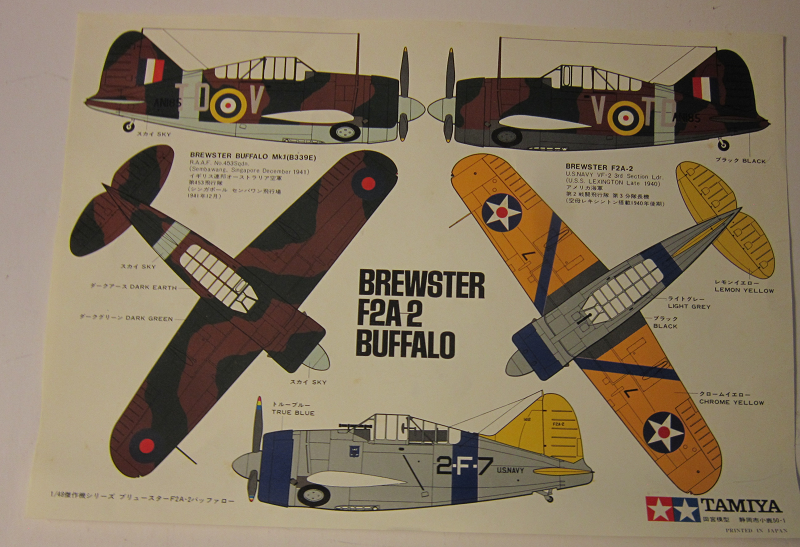 ​It has a navy-blue diagonal stripe over the wings. The fuselage code is followed by black U.S. NAVY. There is a small black 1412 on the sides of the rudder and F2A-2 on the rudder flap.

The reverse side of the sheet has 6 assembly steps on it.

The second instruction sheet is 8" x 11", printed in color on one side on slick-coated paper. It has a 3-view of the box art scheme and a 2-view of the U.S. Navy one.

Parts fit the box tight. The trees are not alphabetized or illustrated in the instructions. However, they do have part number tabs next to the parts on them. 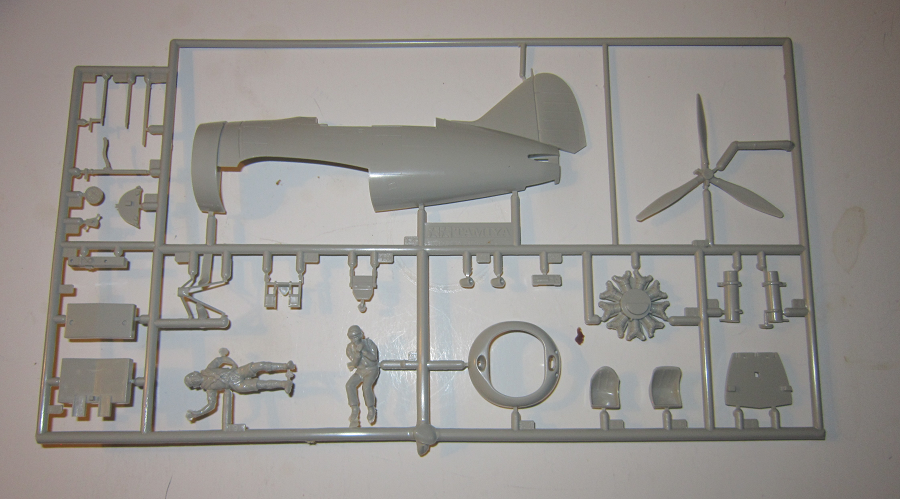 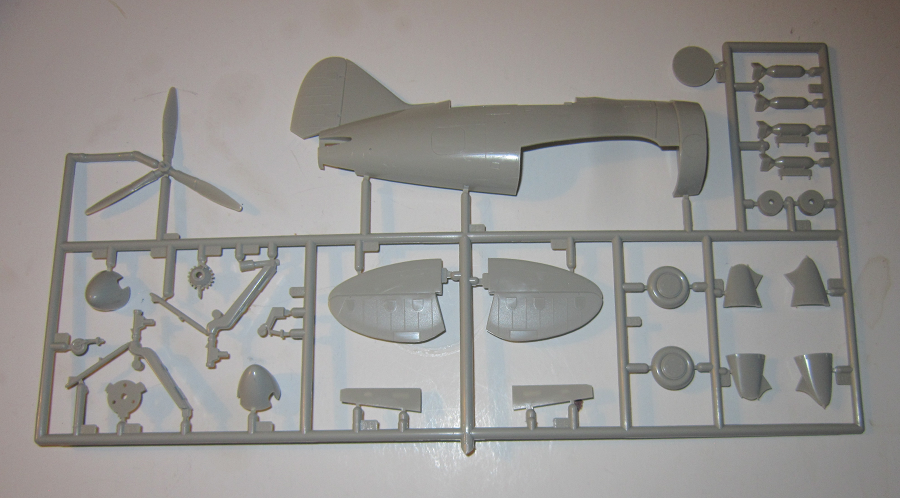 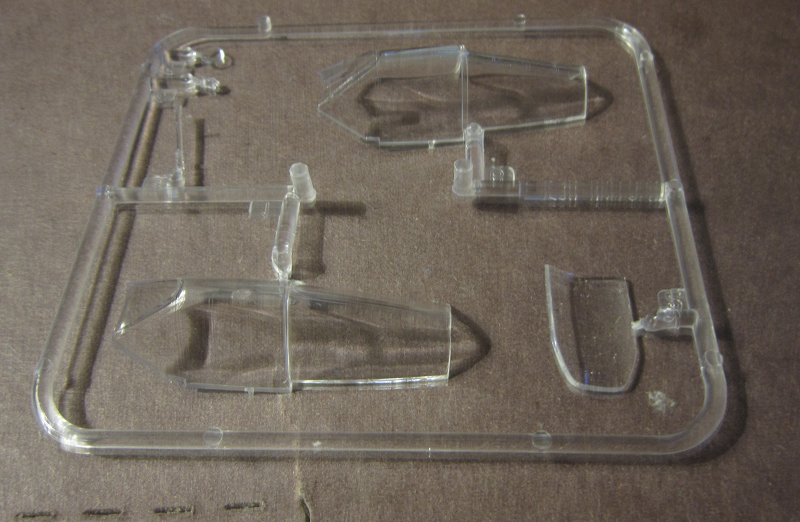 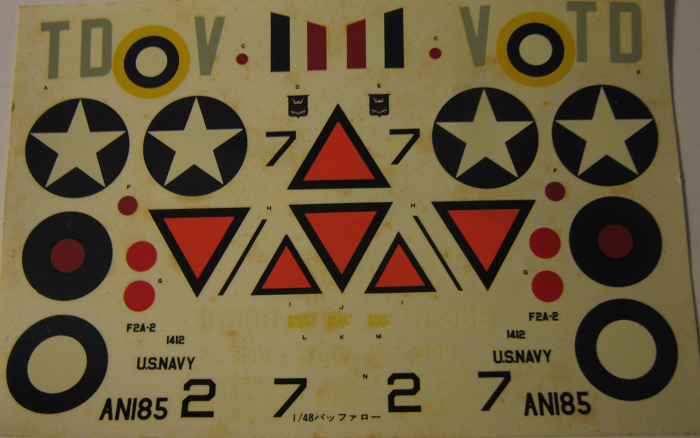 ​The kit has nice raised detail. Flaps are all molded solid.
​Recommended.