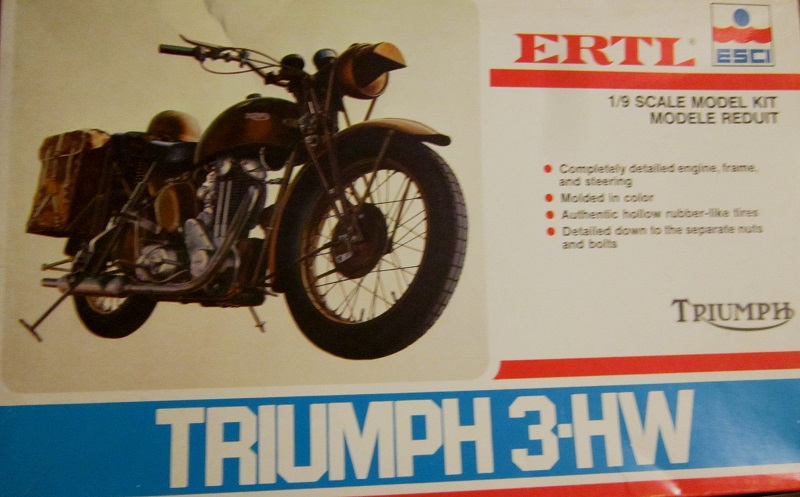 At the beginning of the war in September 1939, the British Forces had about 21,000 motorcycles of various types and manufacture (Ariel, Matchless, Norton, BSA, Triumph). To which numerous motorcycles originally meant for civilian market were added, to meet the requirements of the Royal Army. This contribution continued until the production capacity 9 of the industries was no longer able to satisfy the growing demands which by the end of the war amounted to a total of over 525,000 units, excluding the R.A.F. and the Royal Canadian Air Force.

The Royal Army, that was motorcycle equipped at all levels, the units of dispatch-riders, military police and regimented in reconnaissance units preceded and maintained liaison between the motorized columns. This was a very difficult job in operation zones which were lacking in or from which the enemy had purposely removed even the most elementary road signs.

With regard to coloring, we have to base ourselves on the details referring to the various operation theaters. For the European Theater, since the French campaign in 1942, the color was characterized by a dark brown (dark heart) paint. Later it was replaced by a dark green and in the last months of the war by a deep bronze green. For the Middle-East and African Theater the basic color was a light sand.

With regard to eventual camouflage in several colors, there is no decent photographic documentation, even if as a result of individual initiative or the enemy, every motorcycle was probably repainted depending on the theater in which it was used.

Esci was a prolific model company based in Italy. They manufactured all manner of model subjects in the popular scales. Later on their molds went to Ertl in Dyresvile, Iowa and even later to DML and Revell of Germany. I don’t think that Esci exists

This kit came in a shrink wrapped tray and lid type box. The box art shows a Triumph 3-HW in bronze green. It has a British paratroopers steel helmet atop the seat and a Sten gun slung over the side and cloth saddle bags on the rear. No unit markings are shown. This illustration is on the left half of the box lid and a list of the kit’s features is on the right half: completely detailed engine, frame and steering. Molded in color. Authentic hollow rubber-like tires. Detailed down to the separate nuts and bolts.

These features are repeated on the side panels of the box with a few more added: workable front steering. Clear display name plaque. Includes vinyl tubing for brake and clutch lines. Dispatch case, helmet, machine gun and decals. Model makes up to be 233 mm long (9 ¼”), 105 mm high (a little over 4”) and 85 mm wide (3 ¼”).

This kit contains 2 light tan large trees of parts, a steel colored tree, 2 clear trees, a black vinyl tree and 2 back vinyl tires all in a sealed cello bag. A stapled-shut waxed –paper envelope holds 4 metal springs and a length of black vinyl tubing. The decal sheet and the instructions complete the kit’s contents. The cello bag has a sticker on it saying MADE IN ITALY.

The instructions consist of bound booklet of 8 pages in 8 ½” x 11” page format.

Page 1 of the instructions begins with a profile line drawing of the Triumph 3-HW, followed by the history of the motorcycle.

Page 3 through 6 have a grand total of 12 assembly steps. I feel that these steps should have been a lot more with less shown in each step, because what are done in these instructions have arrows pointing all over the place to form absolute spider webs that are very hard to decipher.

Page 7 has profile line drawings of each side of the Triumph. On side shows a Polish national red and white checkerboard insignia to place on the forward end of the fuel tank, followed by a white serial no. C79075 and a small white “minimum oil level” on the side of the oil tank.

The actual decal sheet has 3 other markings on it that are NOT shown on these illustrations. Also, no mention is made that the marking shown is Polish or what unit it was with.

The first  one of the other markings has the word TRIUMPH and the serial no. 15206182 on it and I.DAVIES in small red letters.

The second one has a black oval with a white rhinoceros on it and the serial no. 12448685.

The third one has a white bird logo with a white serial no. that is impossible to make out on the white backing sheet.

Actually, I’m not sure of the accuracy of the other white numbers for the same white on white reason.

There are instrument faces on the decal sheet also.

At the bottom of page 8 is a list of other model kits that Ertl-Esci marketed at one time years ago: 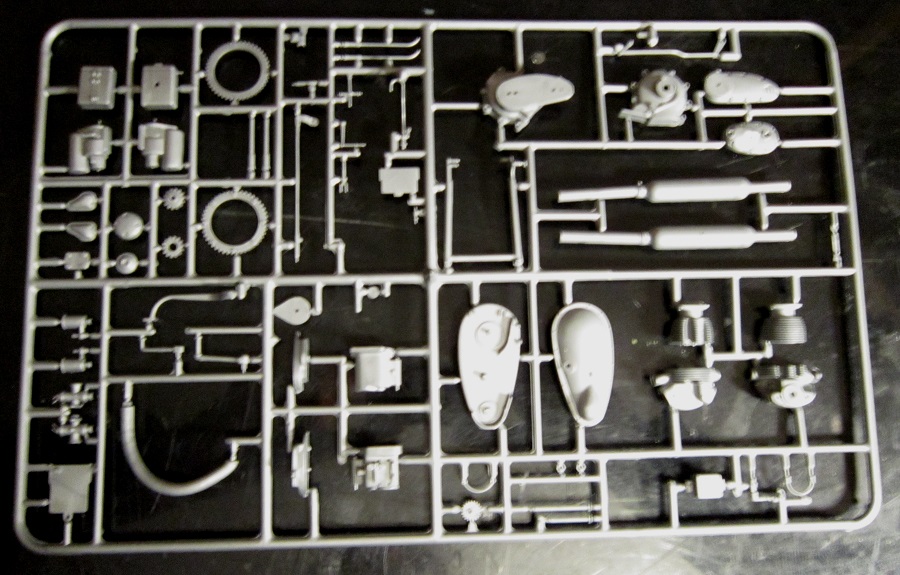 The light tan colored parts tree that is numbered and holding part number 63 to 104 holds frame parts for the bike and the seat, handle bars etc. (37 parts) 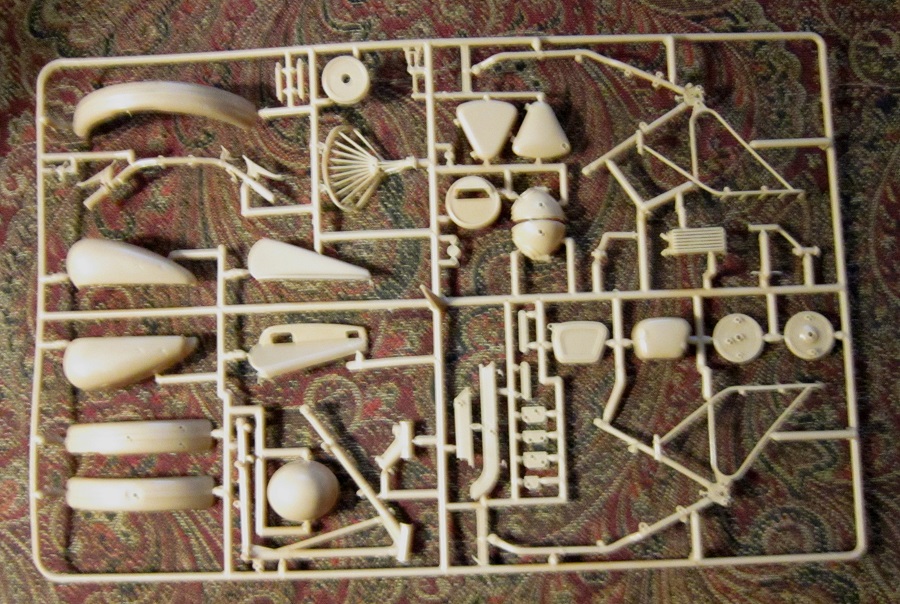 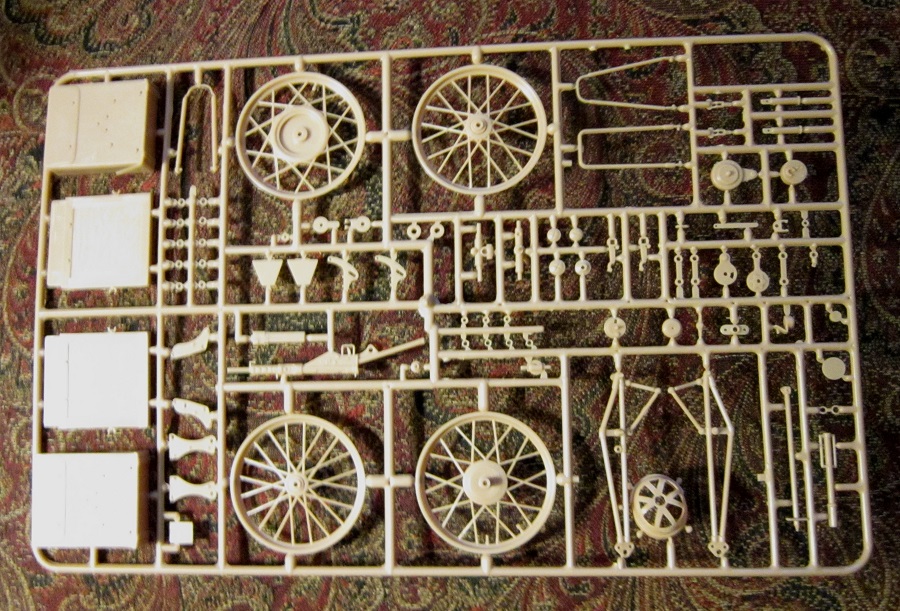 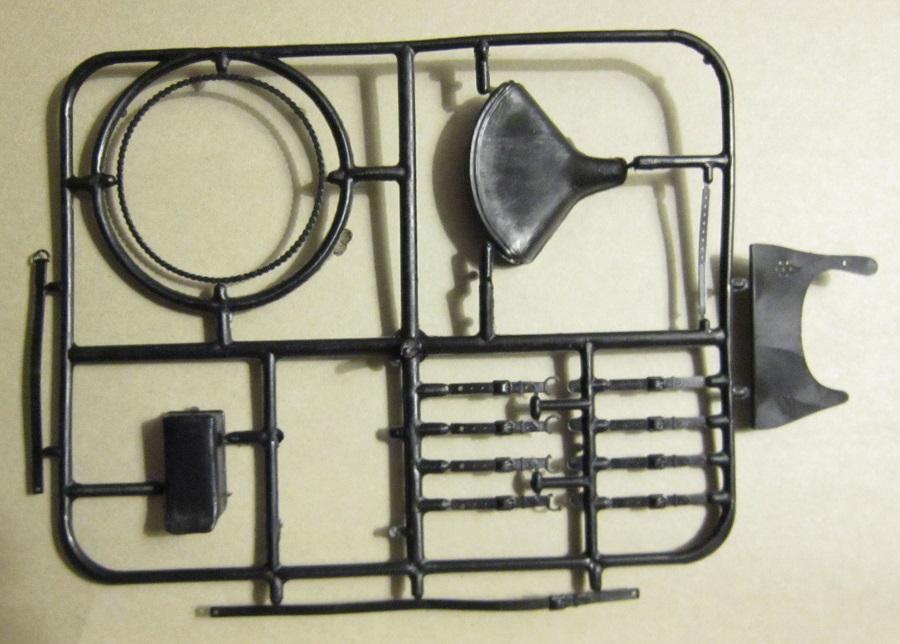 The clear parts tree that is numbered and holding part number 178 to 181 holds light lenses and the base name plate (5 parts) There is a second clear tree in the kit, but no mention of it and I wonder if it was accidentally put into the kit at the factory and is excess to this kit?? 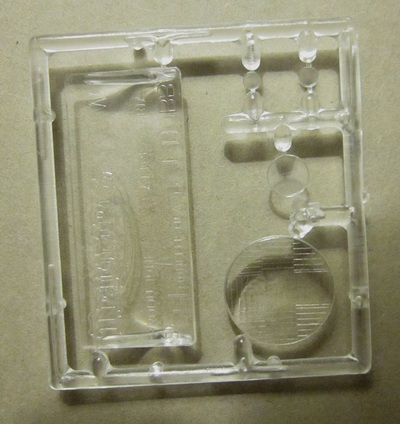 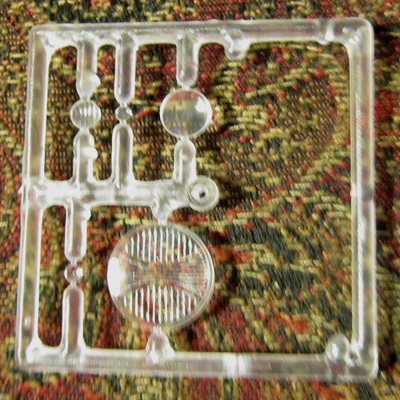 The 4 metal screws, the length of black vinyl tubing, the two black vinyl tires and the decal sheet complete the kits contents.

The tires have great tread pattern on them and raised letters on the sides that say DUNLOP UNIVERSAL and 3-25-19 (which I assume is the tire size?). 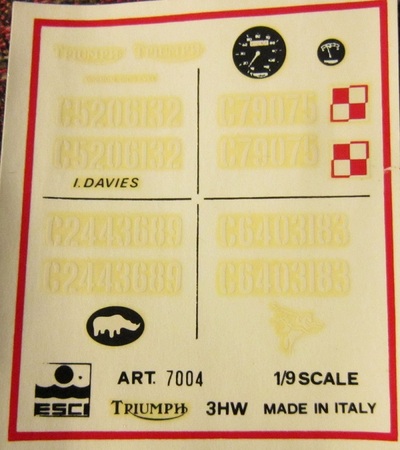 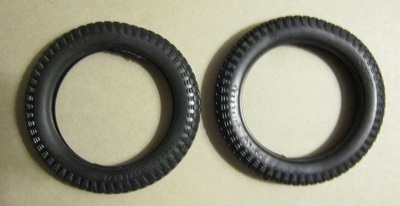 This kit will really make up into an impressive model, because of it’s complexity and size. I only recommend it to advanced modeler therefore.

My only complaints are the lack of information about the decal options and the terrible complexity of the tangled drawings for assembly and trying to decipher them.

I purchased my kit back in the 70’s at the Ertl factory discount store in Dyresville, IA.