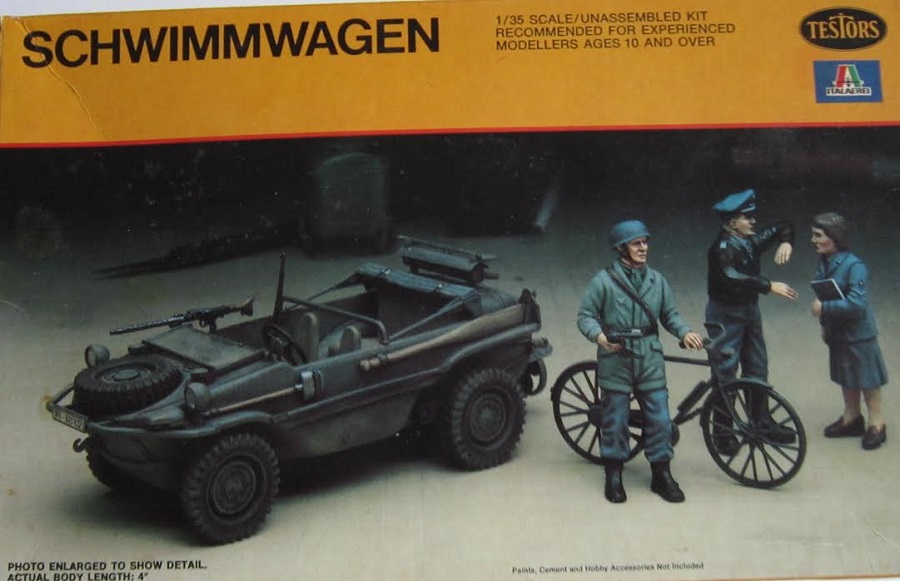 In the 1930's the German military began appreciating the need for amphibious vehicles, realizing that such machines would be extremely useful for reconnaissance and other missions in areas where rivers, marshes, and other water obstacles would limit the mobility of normal vehicles. Several designs were experimented with, but only one was eventually produced in large quantities, that being the design submitted by the famous Dr. Ferdinand Porsche.

The original Porsche design, called the type 128, and the type 150 were built in 1940 for evaluation and troop trials. It proved to be a good overall design, though the military requested numerous chages be made. The re-designed "Schwimmwagen" (literally "Swimming Car") was designated type 166. It became the most widely used German amphibious vehicle of WWII Production commenced in 1942 by Volkswagen in Wolfsburg and continued into 1944, by which time 14,265 had been built.

The Schwimmwagen employed many of the mechanical components of the Volkswagen type 82, "Kubelwagen" light car. However, unlike all the other Volkswagen designs, the Schwimmwagen was equipped with four-wheel drive to further improve its cross-country mobility. For propulsion in water, the hinged propeller unit was manually lowered into the water, where it engaged a power take-off from the engine. As a normal land operation, steering was accomplished by turning the steering wheel, the front wheels acting as rudders.

The Schwimmwagen proved to be an extremely useful, reliable vehicle, and was employed in large numbers by the German Army, SS, and Luftwaffe units. It was used for scouting and liason duties, replacing the motorcycle-sidecar combinations formerly used in many formations. Its performance in water and over soft, marshy ground was excellent, and being extremely light, could be manhanded by its crew if it became bogged-down.

The Allies too recognized the versatility of the Schwimmwagen, and captured examples were often put to use. They were found to possess superior water-handling characteristics to the larger, U.S.-built Ford GPA amphibious Jeep. Today, surviving Schwimmwagens are highly sought-after by collectors of historic military vehicles. Examples in good condition have sold for as high as $20,000 in recent years.

Italeri is an older prolific model company based in Italy, They market all manner of model subjects in the popular scales. Testors was their U.S. distributor at one time.
​THE KIT:

This kit came in a shrink-wrapped end opening type box, that has a slide-out tray inside. While I am no fan of this type of box (parts find their way past the end flaps to become lost), the tray eliminates this problem.

The box art show a color photo of the schwimmwagen, a bicycle and 3 figures made up and posed atop a modeler's work bench.

The box art recommends the kits to experienced modelers ages 10 to adult.

The bottom of the box has 4 color walk-around type photos of the model made up.

The officer and female figures are absent in these photos. Credit for the model build is given to Mike Good. 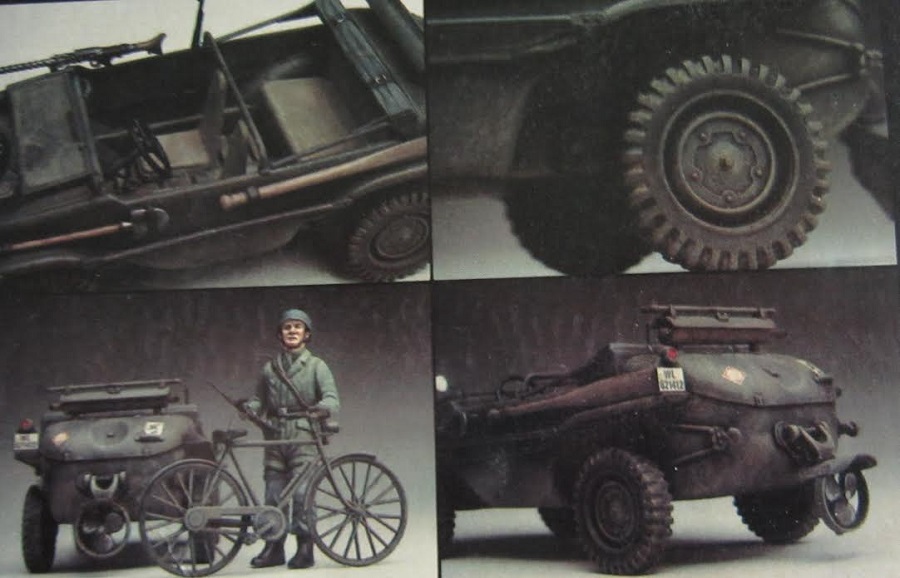 Features mentioned are: 89 parts, a bicycle, 3 figures, the 166 car can be built with a optional canvas top and propeller in the up or down position, the wheels rotate, decals are for 3 different markings, the instructions include weathering and detailing techniques, authentic decals are by Micro Scale.
​WHAT'S IN THE BOX:

This kit contains 2 Panzer-grey parts trees, a clear tree, the decal sheet, instructions and a brochure of other Testors kits and paints. Parts are loose and not cello bagged.

Page 1 of the instructions begins with a black and white repeat of the box art photo, followed by the history of the schwimmwagen, BEFORE STARTING, PREPERATION OF PARTS, PAINTING and DETAIL PAINTING instructions.

Page 2 through 5 give a grand total of 7 assembly steps.

Text in each assembly walks you through step by step.

The bottom of page 5 has a customer sevice coupon to mail in for any assistance with the kit.

Page 6 has a long figure painging and weathering hints instructions.

Page 7 has decal application instructions and a 3-view line drawing showing where to apply your choice of 3 different scheme markings.

Page 8 has the parts trees illustrations. The parts trees are labeled with geometric symbols, rather than being alphabetized like in most other model kits. They are a star, circle and square symbols. 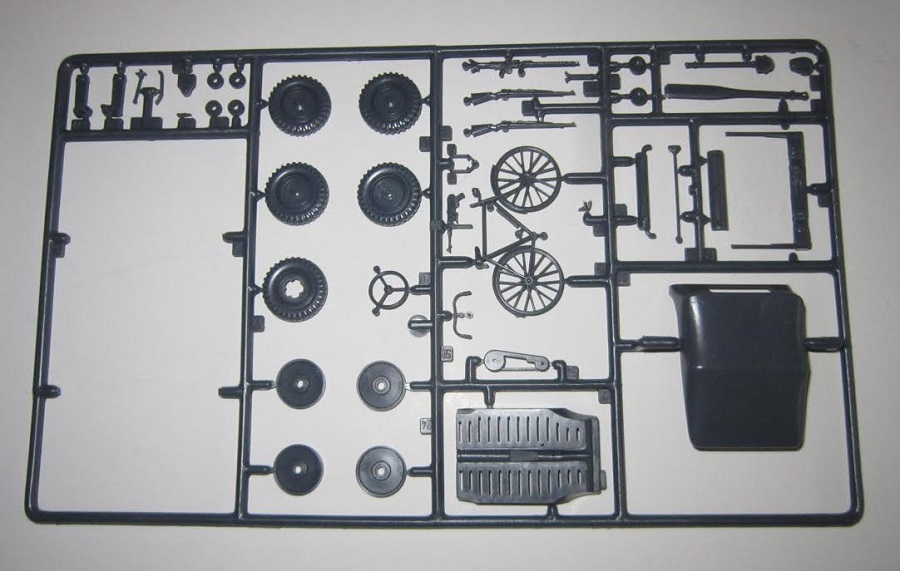 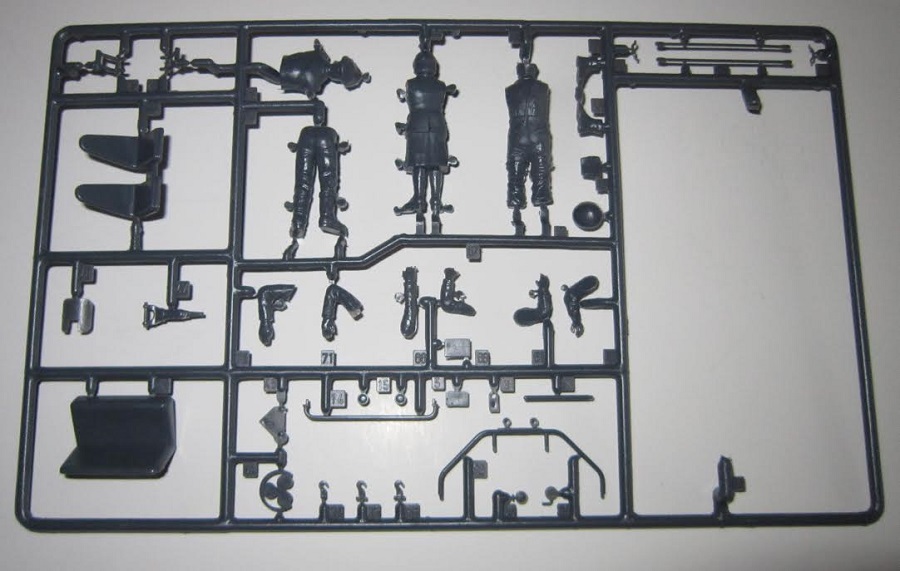 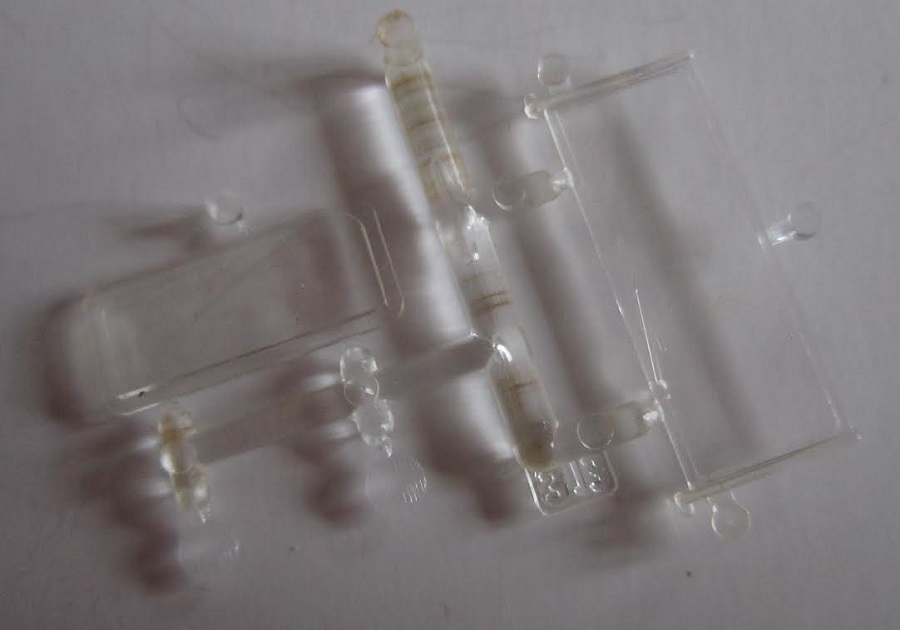 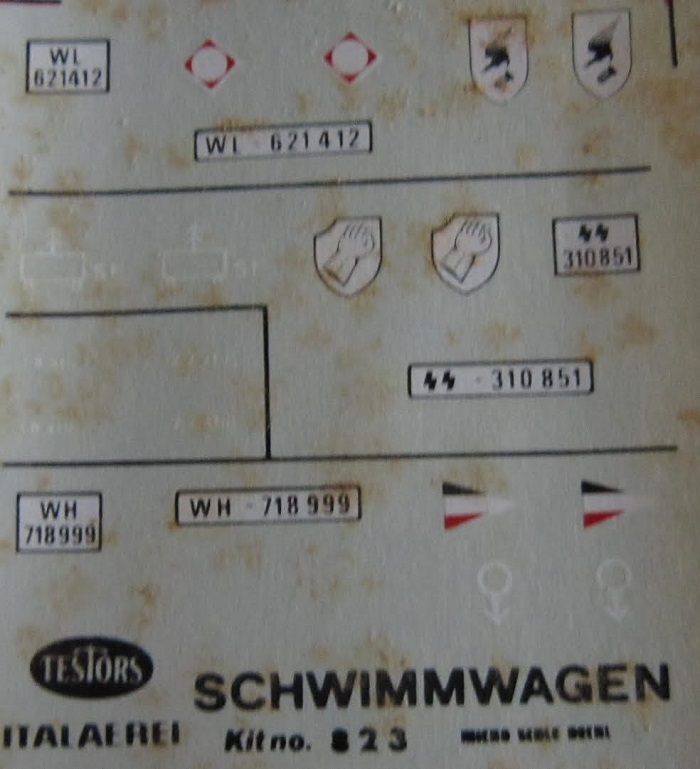 I put 3 body parts together so far and stopped.

This is a neat little German subject.
The kit was courtesy of my wallet years ago.