The Mitsubishi A6M Zero was a long-range fighter aircraft, manufactured by Mitsubishi Heavy Industries, and operated by the Imperial Japanese Navy from 1940 to 1945. The A6M was designated as the Mitsubishi Navy Type 0 Carrier Fighter ( rei-shiki-kanjō-sentōki?), and also designated as the Mitsubishi A6M Rei-sen and Mitsubishi Navy 12-shi Carrier Fighter. The A6M was usually referred to by its pilots as the "Zero-sen", zero being the last digit of the Imperial year 2600 (1940) when it entered service with the Imperial Navy. The official Allied reporting name was "Zeke", although the use of the name "Zero" was later commonly adopted by the Allies as well.

When it was introduced early in WWII, the Zero was considered the most capable carrier-based fighter in the world, combining excellent maneuverability and very long range. In early combat operations, the Zero gained a legendary reputation as a dogfighter, achieving the outstanding kill ratio of 12 to 1, but by mid-1942 a combination of new tactics and the introduction of better equipment enabled the Allied pilots to engage the Zero on generally equal terms.[3]

The Imperial Japanese Navy Air Service ("IJNAS") also frequently used the type as a land-based fighter. By 1943, inherent design weaknesses and the failure to develop more powerful aircraft engines meant that the Zero became less effective against newer enemy fighters, which possessed greater firepower, armor, and speed, and approached the Zero's maneuverability. Although the Mitsubishi A6M was outdated by 1944, design delays and production difficulties of newer Japanese aircraft types meant that it continued to serve in a front line role until the end of the war. During the final years of the War in the Pacific, the Zero was also adapted for used in Kamikaze operations. During the course of the war, the Japanese produced more Zeros than any other model aircraft.

21st Century Toys was a company back in the 70’s that I believe went out of business after only a year or two. They used to peddle their products at Walmart and Target, where I bought 3 of their kits at that time. I still don’t understand WHY they went out of business and also why they used the name TOYS in their trade name. Their stuff was definitely model kits in my estimation and not really toys.

The kit comes in a shrink-wrapped tray and lid type box. However, 21st put my kit into the wrong box at the factory. The box is for the Zero A6M3 model 22 and NOT the A6M2 type 22 that is inside.

A warning is on this box that I’m sure is also on the correct A6M2 box that warns of a choking hazard due to small parts and that the kit is not for children under 3 due to that. On a scale of 1 to 5 the kit is at the skill level 2, which means it is an easy build. Paint and cement not included.

Features of the Zero kits are: authentic components with engraved panel lines (which to my estimation are a bit heavy), the canopy opens to reveal the detailed cockpit, the landing gear retracts and extends. There is a Japanese pilot figure included and high quality decals for 3 markings.

The kit is recommended for modelers over 10 years of age. The copyright date is 2007.

We are asked to join the 21st Century’s fan club back then. Their web and street address are provided for when they were still in existence. The kit says it was made in China. 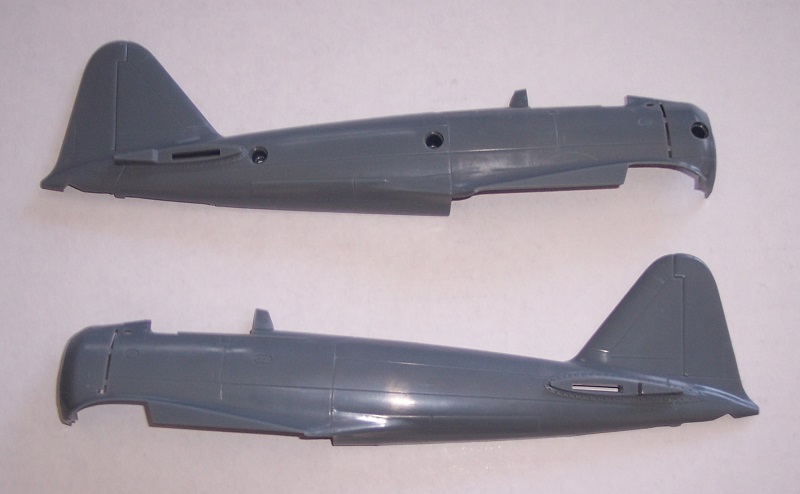 The lower wing is full span and the tops of the wings are in 2 sections.
The rest of the medium gray parts are in long tubes of cello that is heat sealed into multiple compartments.

The second tube has the cowling halves in the first compartment, the second holds the elevators, the third holds the engine air-intake. The final compartment has the landing gear legs and doors in it. Close examination of the cowling in this kit proves it is a A6M2 and not a A6M3. There are marked differences in the air intake scopes of these two Zeros. 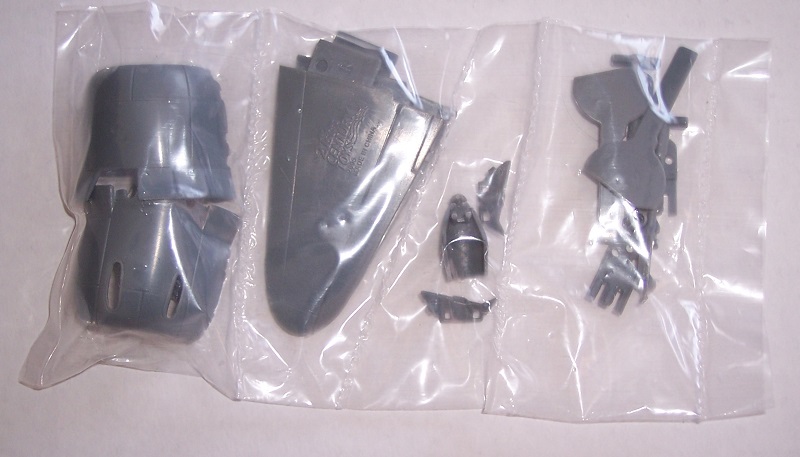 The third tube has the belly fuel tank halves in the first compartment, the second holds the clear cockpit windows, the main tires are in the third , the carrier arrestor hook is in the fourth and the pilot figure is in the final compartment. He is divided into separate head, body and arms parts.

A vacuformed clear blister-pack holds machine guns, radio aerial, wheel hubs etc. in dark green plastic and two more clear parts.
There is a sealed cello with 11 small bright metal screws, one small black screw and a long metal rod that is used for the propeller shaft. A few of these screws (including the black one) are excess  and not needed to complete the kit. These screws are for assembly of the wing and fuselage halves. If you care not to do screw assembly you will have to putty over the location holes where the screws mount. I intend to not screw my kit together. 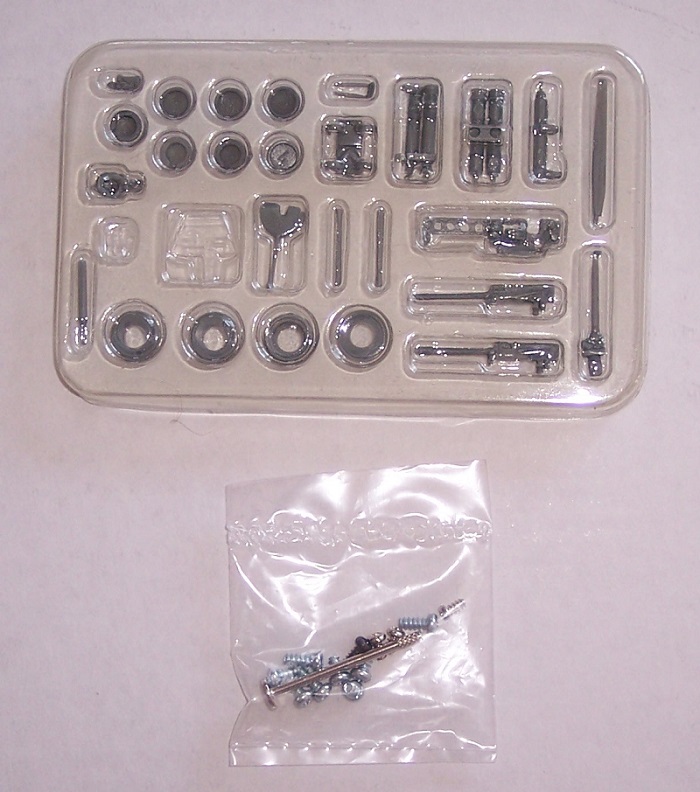 The instructions and the decal complete the kit’s contents. 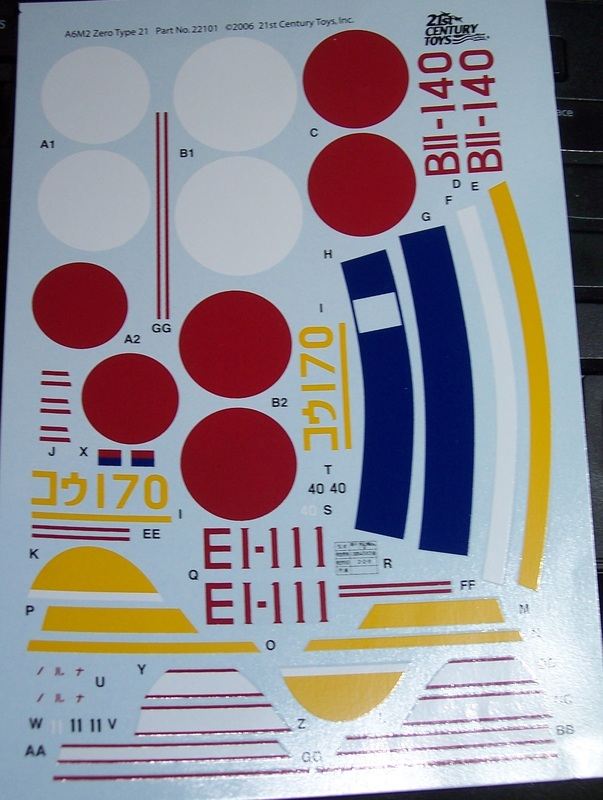 The instructions consist of a single sheet that accordion folds out into 6 pages in 8 ½” x 12” format.

Page 1 of the instructions begins with a dark and grainy black and white photo of a Zero flying along over water. It is in the marks of the Kounoike Flying Group, Japan 1944 (one of the markings provided on the decal sheet). It has a yellow fuselage band and rudder tip with a white stripe below it. The tail code is 2 Japanese characters followed by 170 in yellow. The aircraft is in dark green over gray undersides and has a black cowling. The propeller spinner is bare metal. The rising sun insignia on the fuselage sides and wings has a white surround.

Next is the history of the A6M2.

Page 2 through 4 give a total of 9 assembly steps.

Page 5 has three side-profile illustrations of schemes and markings:

1.   A Zero flown by Squadron Leader Lt. Hideki Shingo of the Aircraft Carrier Shikaku Fighter Squadron, Battle of Santa Cruz, October 26th, 1942. It is in overall dark gray with a black cowling. It has a white fuselage band and bare metal propeller spinner. The rising sun insignia don’t have white surrounds.The tail has 2 horizontal white bands outlined with red over black E 111.

2.  The second marking and painting scheme is the one described above for the KIounoike Flying Group.

3.  A Zero flown by Lt. Sumio Nono, leader of the Zero section in the second wave assault on Pearl Harbor on December 7th, 1941. Based on the aircraft carrier Hiryu. It is overall gray with a black cowling and bare metal propeller spinner. It has two dark blue fuselage bands. The rising sun marks have no white outlines and the tail code is a red B11-140.

Colors are called out in Model Master and Tamiya Brands of hobby paints.

Page 6 has above drawings of Zeroes in the dark green or gray schemes. Below these is Century’s web address and phone number back in the 60’s.

Century did their aircraft in 1/32nd scale, 1/18th  and 1/144th scale when they were still around. They also did some AFV models in those scales and some of the kits were factury assembled and painted already. I have three of those: the Bf-109G-14, the Macchi C.205 Veltro and the Macchi C.202 Lightning. The schemes on these are outstanding. I could never equal them myself with my airbrush for sure.

These old 21st Century Toy kits are still available several places on the internet. I highly recommend them for their price and quality.

Like said earlier, I purchased my kits at the local Walmart until they disappeared there back around 2007.