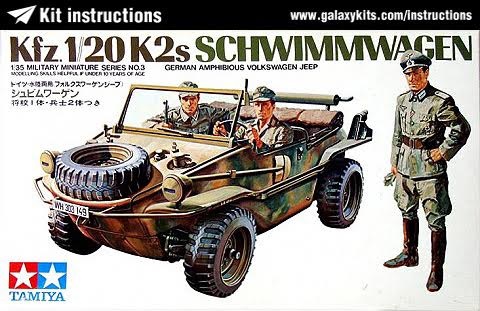 The Volkswagen which has been called a German national car, is familiar not only to the Germans themselves but also to millions of people throughout the world with its affectionate nickname "beetle".

The Volkswagen itself was coceived and designed in 1938 by Dr. Ferdinand Porsche, the originator of the famous sportscar. by order of Hitler. Its main features were matchless durability and inexpensiveness. Then the German Army decided to develop a military vehicle based on this small, tough and inexpensive car. As a result, several kinds of military vehicles were manufactured for trial. This amphibious Schwimmwagen was one of them. The Allied Forces, therefore called it the "amphibious Volkswagen".

Form of the Schwimmwagen is a nimble boat-like one similar to that of a buggie which has recently become popular. Is high-set exhuast pipe at the rear looks quite humorous, but of course it is so set in anticipation of the vehicle's use on the water. Engine is mounted at the rear and is the same as that of the Volkswagen - an air-cooled, 4 stroke, level-opposite, 4-cylinder one of 1,131 cc capacity. Is maximum power reaches up to 245 hp and is generated when it is rotated at a low rate of 3,300 rpm. This low revolution number is the main cause of its increased durability.

When running on the water, the vehicle uses  screw at the rear. However, the screw is raised above the rear engine deck once it is back on dry land. Propeller shaft of the screw is directly connected through a dog clutch with crankshaft of engine. Gear, therefore is neutralized and no backward movement is possible when the Schwimmwagen is running on the water. The steering on the water is done just like when it is on land by change of directions of the front wheels, which serve as a rudder.

Suspension is an independent suspension, the same as that of the Volkswagen, which uses tortion bars both in front and in the rear. Front suspension and the steering device are fixed at the outside of the water-proof bulkhead. Rear suspension also is fixed outside, ut holes in the hull thorugh which rear wheel-shaft is passing are shielded water-proof rubber bushes.

Transmission, transfercase and limited slip differential (the other on is fixed to front wheel) are incorporated en bloc into the rear system. Transmission and differential gears are covered with grease to make them water-proof. Transmission consists of four forward steps and a single backward one. However, all wheels can be driven by the device only when its gear is in a low key.

Instrument board is equipped with a speedometer, a light switch, a red charge-lamp, a green oil-pressure warning lamp, a searchlight plug socket, and an ignitioin key. Under the dashboard are placed a fuel filter and an auxiliary tank pump.

The vehicle has a crew of four and runs at an hourly speed of about 75 km on land, while on the water at about 12 km.

Te small amphibious Volkswagen served many purposes due to its high reliability and nimble maneuverability. In fact, several thousands of them were actively employed to fulfil reconnaissance, liason and various other duties during World War II.

The box art shows the jeep and an officer figure posed against one of Tamiya's signature all white backgrounds that they use for most of their box arts.

The Schwimmwagen is overall earth yellow with a white license plate with the black serial no. WH 303149 on it and no other marks. it has a driver and a passenger seated in front.

An officer stands to the side in a grey uniform with jodpher pants tucked into black jack boots. He has his left hand on his hip and his right hand is holding a pair of gloves.

The 2 enlisted men in the Schwimmwagen both wear field grey uniforms with soft billed field caps. The passenger guy is holding a SP-40 machine pistol.

One side panel repeats the box art smaller in color, followed by a one-paragraph history of the Schwimmwagen in Japanese and 2 color box arts of other crew figure kits that Tamiya markets: a German 3-man tank crew and a German 4-man infantry group.

No kit number are supplied for these 2 kits.
​WHAT'S IN THE BOX:

This kit holds 2 light tan trees, a dark green tree, a clear tree, the decal sheet and the instructions. Parts are in 2 sealed cello bags.

There are 2 lengths of brass rod in the kit, to use inside the axles for strength. They are in a small stapled shut cello bag.

The instructions consist of a single sheet folded in the center to create 4 pages in 8 1/2" x 11" page format.

There are 2 sets of instructions in the box. One is all in Japanese and the other in English.

Page 1 of the instructions begins with 2 black and white photos of a restored Schwimmwagen in a museum, followed by the history of the Schwimmwagen, above illustrations of a German infantryman and a officer showing thier uniform insignias and colors.

The other side of the instruction sheet has a total of 6 assembly steps on it, a 4-view of the Schwimmwagen, a black and white wartime photo of German soldiers, a Pz.Kpfw. IV and a Kubelwagen all grouped together in the desert.

Down the left side of the page is figure assembly instructions and a lot of text to walk modelers through the builds, and parts trees illustrations. 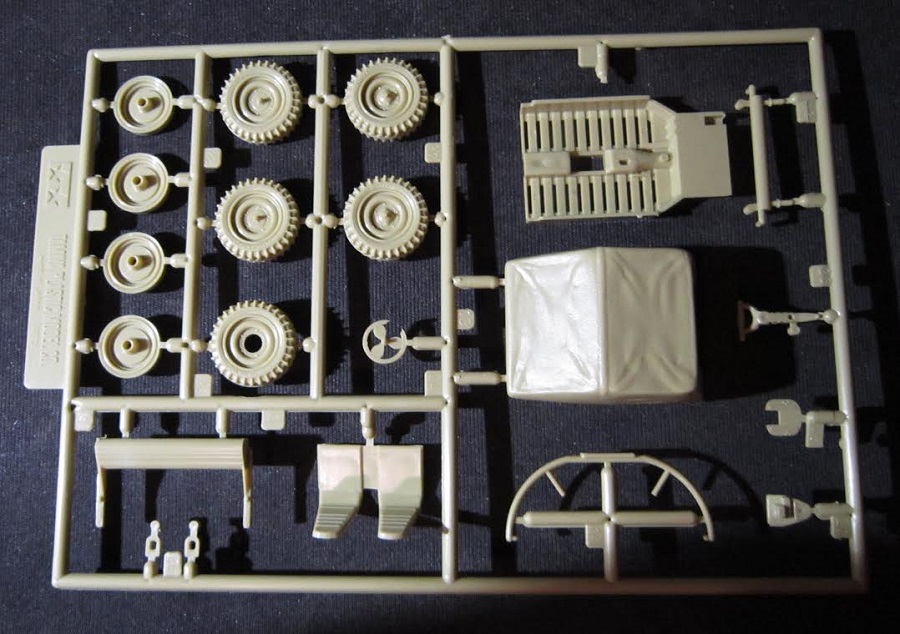 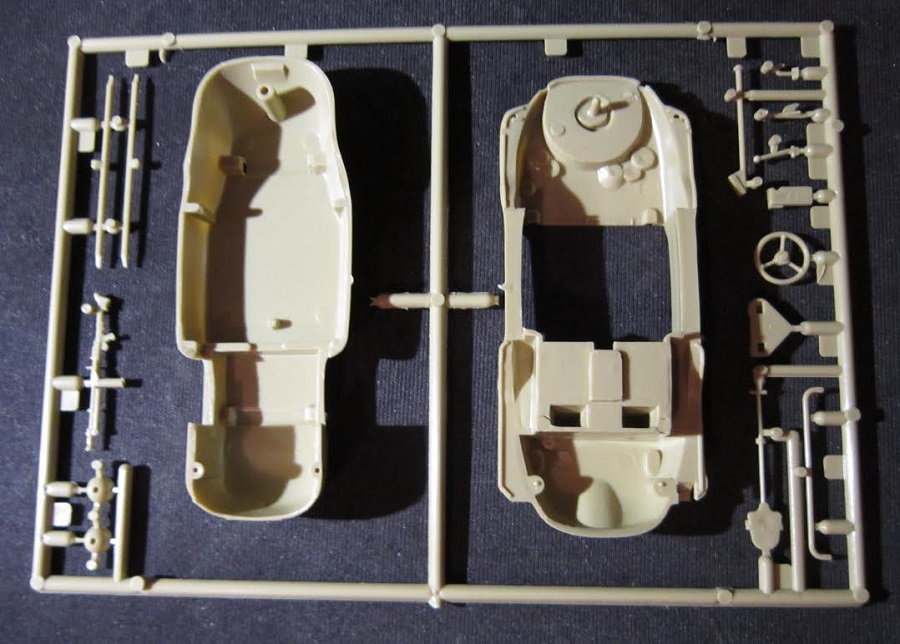 The dark green tree holds: 3 figures (infantrymen divided into separate torso, lower body halves and arms), base name plate, officer figure (divided into full body with separate arms), rifle, pistol in holster, base plate for the officer, MP 40 machine pistol, 2 steel helmets, 2 bills for the soft field caps on the infantrymen figures (they each have the rest of the caps molded on their heads already) and 2 gas mask canisters (24 parts) 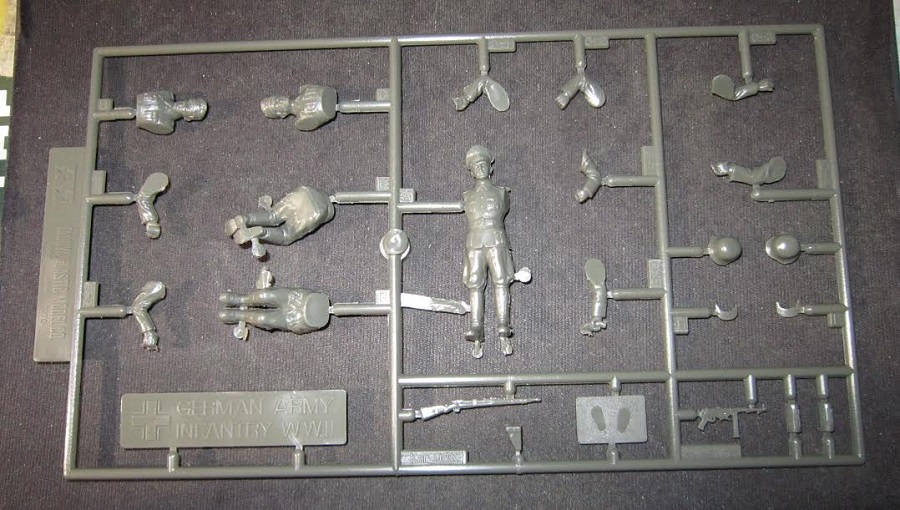 ​The decal sheet and the brass rods completes the kits contents. It holds a lot of uniform patches, helmet insignia, division markings for the Totenkopf Div. (Deaths Head), the Hitler Jugund Div. (crossed keys) and a fender pennant. 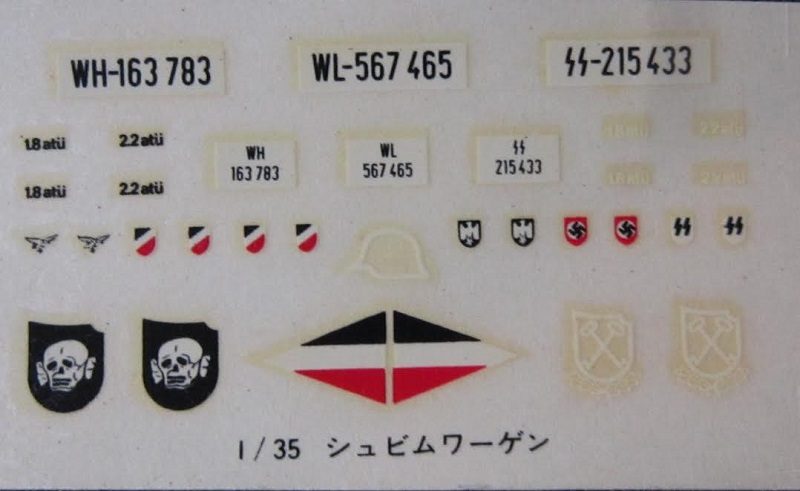 This is a neat German soft skinned vehicle.

​I bought my kit at a local hobby shop that has gone out of business.