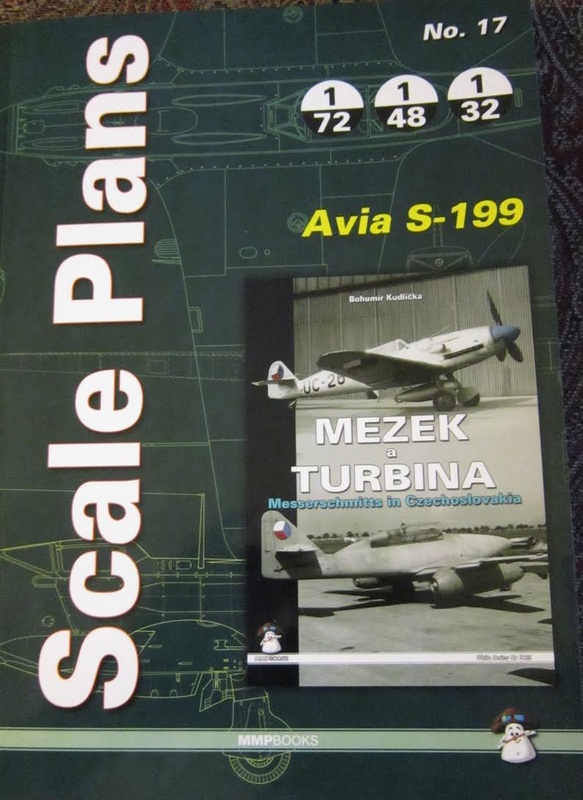 Review of Scale Plans No. 17

The Avia S-199 was a propeller-driven fighter aircraft built after World War II by the two aircraft factories in Czechoslovakia: one of them officially called závod Avia(Avia Plant) (1946–48) and závod Avia-Jiřího Dimitrova (Avia-George Dimitroff-Plant, 1948–49) in Čakovice near Prague, as a post-war corporative part of theAutomobilové závody, n.p. [Automotive Works, National Corp.], and the other one called závod Vysočany (Vysočany Plant, 1948–49) in Prague, as a corporative part of Letecké závody, n.p. [Aviation Works, National Corp.] It was constructed with parts and plans left over from Luftwaffe aircraft production that had taken place under the country's German occupation during the war. Despite the aircraft's numerous problems and unpopularity with its pilots, it achieved fame as the first fighter obtained by the Israeli Air Force, for use during the 1948 Arab-Israeli War. Czechoslovak pilots nicknamed it Mezek ("Mule"), while in Israel it was officially known as the Sakeen ("knife" in Hebrew). In practice, the aircraft was more often called Messerschmitt or Messer (which also means "knife", in German and Yiddish).

This set of scale plans comes in soft-cover that is dark green with a light green line drawing of a Yak-3.

There is a illustration of MMP’s book cover  for their book titled “ Mezek a Turbina, Messerschmitts in Czechoslovakia” White Series no. 9126, by Bohumir Kudlicka.

The cover of this set  holds 6 sheets of line drawings that are 8 ½” x 17” folded in the center to fit the cover and printed on both sides.

Plan no. 1 is to 1/72nd scale. It has a 7-view line drawing  of the S-199 with illustrations of the fuselage bulkheads included.

lan no. 12 (on the other siee of the sheet) finishes the set of plans with a 1/32nd scale 2-view of the S-199 Sakeen, and a profile of it with a non-standard engine cowling.

This is another neat set of aircraft plans by MMP. It will be of great interest to aircraft modelers and aircraft historians as well. Highly recommended.

I want to thank Dr. Roger Wallsgrove, Editor in Chief of Mushroom Model Publications and the folks at Casemate that sent me this review sample.

Casemate is the N.American distributor for MMP in Pennsylvania. MMP books can be seen all listed on their site at: