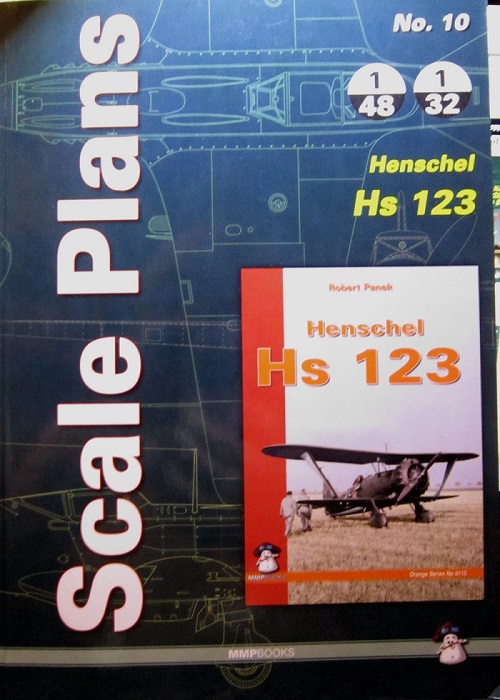 Review of MMP Scale Plans No. 10


The Henschel Hs 123 was a single-seat biplane dive bomber and close-support attack aircraft flown by the German Luftwaffe during the Spanish Civil War and the early to midpoint of World War II. Although an obsolete design, it proved to be robust, durable and effective especially in severe conditions. It continued to see front-line service until 1944, only to be withdrawn due to a lack of serviceable airframes and spare parts.

MMP (Mushroom Model Publications) is based in the UK. All their books and the scale plans are printed in Sandomierz, Poland by Stratus in English. Stratus also publishes books in the Polish language.

This scale plan set comes in a soft cover portfolio sleeve that is 8 ¼” x 11 ¾” format. The background of it is dark green with line drawings of a Yak 3 fighter. The box art of MMP’s book on the Henschel Hs-123 is on the cover. The portfolio contains line drawings of the Hs 123 in 1/48th and 1/32nd scale.


Inside the portfolio are large 16 ½” by 11 ¾” pages folded in the center to fit the sleeve. These pages can be removed to set on a workbench and use.

Page 3 has 3 views of the HS 123A-1. The top, left and right sides and illustrations of the interior bulkheads in the fuselage in 1/48th.

Page 4 has another 3 view of the HS 123A-1. The top with upper wing removed and illustrated separately and the bottom in 1/48th.

Page 7 has a side profile of the HS 123A-1 and illustrations of the interior bulkheads in the fuselage in 1/32nd.

This is one neat set of plans and will be of great interest to modelers of this aircraft or aircraft historians  and enthusiasts. Highly recommended.

I want to thank Dr. Roger Wallsgrove, Editor-in-Chief of MMP and the folks at Casemate for this review sample.

Information about all MMP publications can be found on their web site at:

The US distributor for MMP is Casemate Publications.