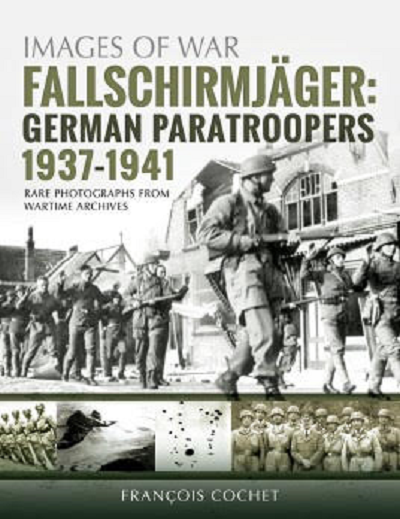 Their famed actions, such as the fighting in Scandinavia, the taking of the Balkan fortress Eden-Emal in May 1940, and the Battle of Crete just a year later, have given them the reputation of being determined, courageous and loyal soldiers.

This book covers the early years of the Fallschirmstruppen (paratroop units) before the beginning of the war, until the height of their successes in 1941.
After which, the Fallschirmjager were more often deployed in a more
"traditional" way, even though high-risk actions (such as Monte Cassino and the Gran Sasso Raid) allowed them to reconnect once more with their glorious past.
About the author:

Francois Cochet is a Belgian author, whose main interest lies in the battles of WWII. Over the last 80 years, he has met and interviewed many German ex-soldiers of the Wehrmacht and collected various memorabilia and documents.
He enjoys helping others research this particular period, and this is his first image-based book. He currently lives in Flanders.

Pen & Sword Military Publishing is based in the UK.

The cover art shows 5 black and white wartime photos, all of which are repeated inside the book.

The largest photo at the top shows the first prisoners captured from the Dutch Army.

Below this, the first photo on the left shows Fallschrimjagers lined up in uniform with their unique style helmets on.

The next picture shows a paratrooper making a jump out of a plane.

The third photo shows a string of parachutes coming down.

The final photo shows Adolf Hitler posing with a group of paratroopers.

The back of the book shows 3 more black and white wartime photos.

Reading left to right, the first one shows a paratrooper that has just landed in snow.

The second photo shows a paratrooper with a wounded face.

The final shot is of a group of paratroopers manning a captured British Bofors (anti-aircraft) gun, using it against its previous owners.

A copy of a Fallschrimjager's death notice card.

Four photos of a Fallschirmjager monument.

There is no color in the book.

This book will be of great interest to historians and modelers alike.

They are the North American distributor of Pen & Sword books and all their titles can be seen on the Casemate site at:
​www.casematepublishers.com