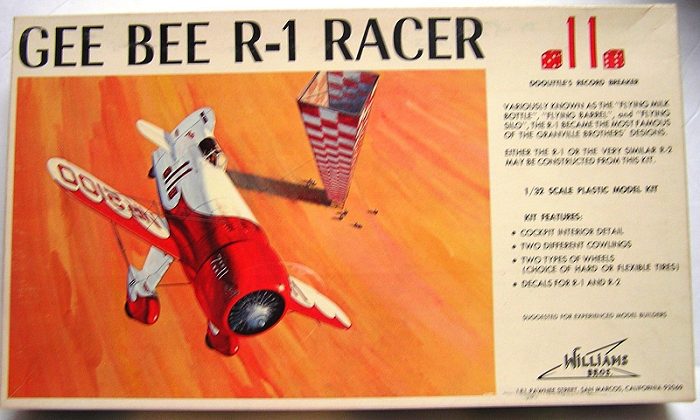 I bought my kit years ago at Toy Fair at the local mall that went out of business. I paid $7.00 for it according to a sticker still on the box.
HISTORY:
​
The Gee Bee Model R Super Sportster was a special purpose racing aircraft made by Granville Brothers Aircraft of Springfield, Massachusetts at the now-abandoned Springfield Airport (Massachusetts), Gee Bee stands for Granville Brothers.

The 1932 R-1 and its sister plane, the R-2, were the successors of the previous year's Thompson Trophy-winning Model Z.

The aircraft had a very peculiar design. Granville reasoned that a teardrop-shaped fuselage — especially as seen from directly above — would have lower drag than a straight-tapered one, so the fuselage was wider than the engine at its widest point (at the wing attachment point[s], within the length of the wing chord).

The cockpit was located very far aft, just in front of the vertical stabilizer, in order to give the racing pilot better vision while making crowded pylon turns.

The distinction of a land plane record was noteworthy because, at that time, specialized speed seaplanes outran land planes, e.g. the Macchi M.C.72 with over 700 km/h.

The Springfield Union of September 6, 1932 quoted Doolittle as saying, "She is the sweetest ship I've ever flown. She is perfect in every respect and the motor is just as good as it was a week ago. It never missed a beat and has lots of stuff in it yet.

I think this proves that the Granville brothers up in Springfield build the very best speed ships in America today."

The R-1 rapidly earned a reputation as a potentially very dangerous machine. The small wings, very low polar moment of inertia, and tiny control surfaces made for an aircraft that could rapidly get away from all but the most skilled pilots.

This shortcoming was common to most air racers of the day. During the 1933 Bendix Trophy race, racing pilot Russell Boardman was killed, flying Number 11. After taking off from a refueling stop in Indianapolis, Indiana, the R-1 stalled, and crashed.

The R-1 was later repaired and now incorporated a fuselage extension of approximately 18 inches, creating the "Long Tail Racer."

It was decided not to rebuild the wings, but to use the original wings from the R-2, which had been removed in February 1933 when a new wing with flaps was built and installed. This aircraft crashed in a landing overrun incident soon after it was built, but Roy Minor, the pilot, was not severely injured.

After another rebuild, the Long Tail Racer was sold to Cecil Allen. Against the advice of the Granvilles, Allen modified it by installing larger gas tanks aft of its normal center of gravity, which apparently made the aircraft unstable in pitch from tail-heaviness. Allen took off with a full fuel tank, crashed, and was killed.

After this final crash, the aircraft was never rebuilt.

Williams Bros. at the time this kit was released was based in San Marcos, CA. They went out of business for a few years and now are back and based in Round Rock, TX.

The plane has a white rear fuselage and a red forward one, red wing leading edges and red leading edges on the wheel spats. The red areas have scalloped edges

There is a white 7 with four dots in a square and 11 on the sides of the cowling, serial no. high on the rudder sides over Gee Bee and Manufactured by Granville Bros. Aircraft Inc., Springfield Airport, Mass.

One side panel has illustrations of accessory items Williams Bros. manufactures: a Le Rhone rotary engine, a Spandau machine gun, a Vickers machine gun, a Parabellum machine gun and a Lewis machine gun. Also a Pratt & Whitney Wasp engine and a Wright Whirlwind engine. No kit numbers or scales are shown for these kits.

​The other side panel has 4 color box arts of other aircraft kits Williams Bros. also manufactures: a Northrop Gamma, a Curtiss C-46, a Martin B-10B and a Boeing 247. Again, no scales or kit numbers shown.

The parts trees fit the box tight in all 4 directions.

The instructions consist of a single-sheet printed on both sides in large 11" x 17" format.

The face side of the sheet has the history of the Gee Bee R-1 and general instructions, over Williams Bros. street address when they still resided in San Carlos, CA.

The reverse side has 2-view's of Gee Bee's numbers 7 and 11. The color schemes are the same. These are over an exploded drawing for assembly purposes.

The monofiliment is taped to a corner of the instructions with a round yellow sticky label.

The parts trees are not alphabetized or illustrated in the instructions and have no part number tabs next to the parts on the trees. Bad move Williams Bros. ! 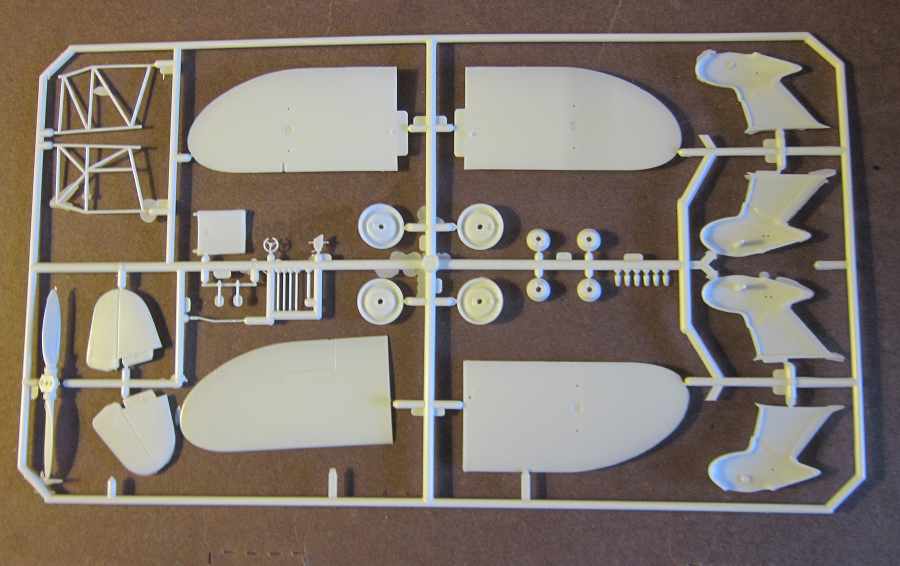 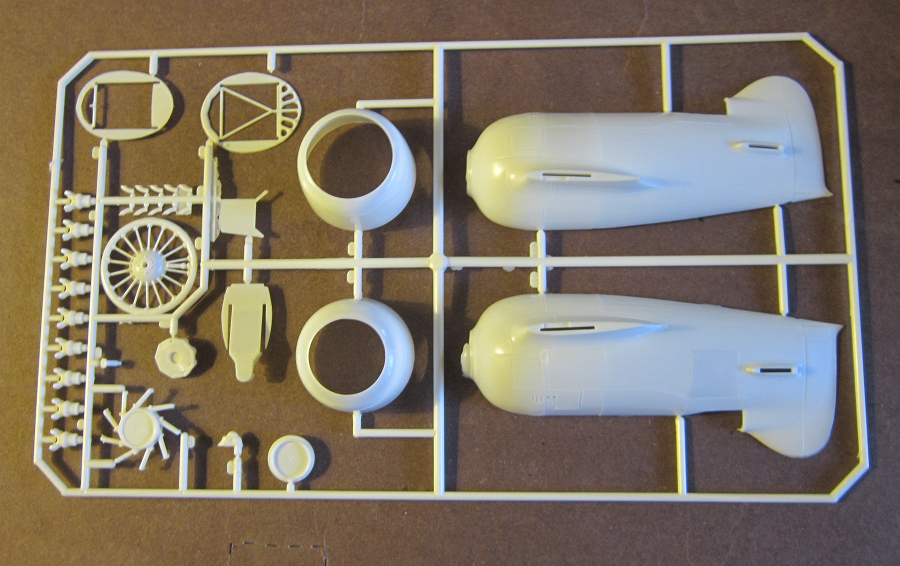 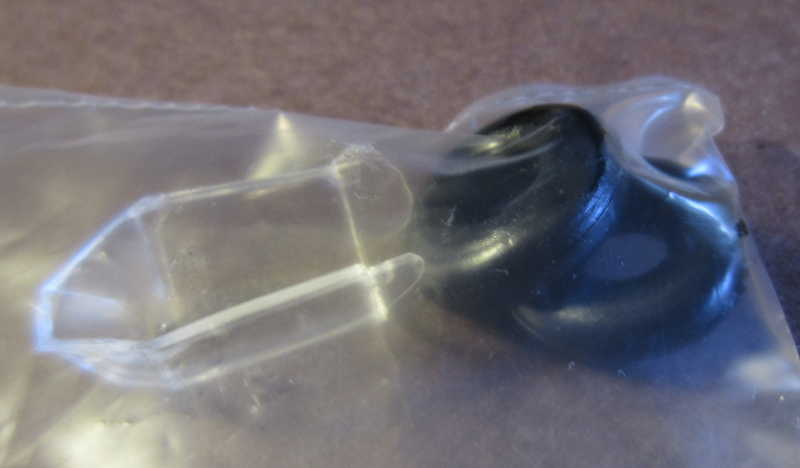 ​The decal sheet also includes the dashboard dials and some stenciling. 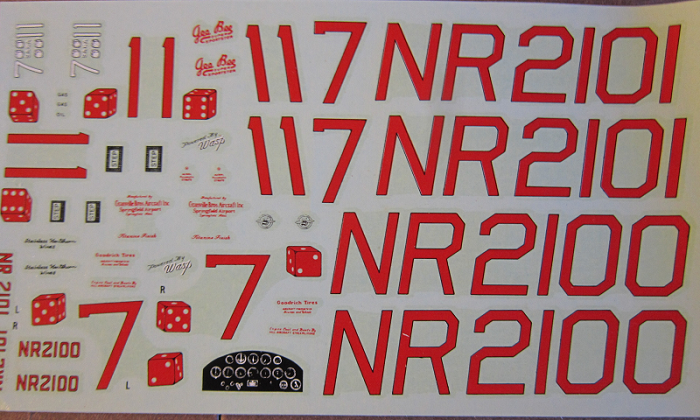 ​There is no pilot figure included in the kit.

Flaps are all molded solid.