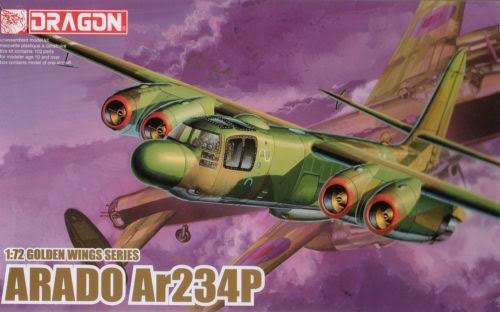 The Arado Ar 234 “Blitz” (Lightning) was the only turbojet-powered bomber to achieve operational status in World War II, and as such was an important milestone in the development of military aviation.

The origins of the type can be traced to a 1940 requirement, issued by the German air ministry for a turbojet-powered fast reconnaissance aircraft. An extensive program of design and development resulted in no fewer than 18 prototypes with a powerplant of two Junkers 004 or four BMW 003 turbojets, provision for rocket-assisted take-off units, a cabin with or without pressurization and a pilot’s ejection seat, and a clumsy combination of a drop-away trolley for take-off and extendable skids for landing.

The wheeled trolley/skid used on the Ar 234 prototypes for take-off and landing was clearly impractical for an operational airplane. Plans were made for a Ar 234A production derivative of the Ar 234V3, but this was dropped in favor of the Ar 234B model. This aircraft used tricycle landing gear in which all three units retracted into the fuselage, an arrangement that was earlier pioneered on the Ar 234V-9.

The Arado Ar 234P (subject of this new DML kit) was a proposed design for a two-seat night fighter variant with a variety of different powerplant options and a lengthened nose to accommodate a Berlin centimetric air to air radar unit. None ever went into production.

The aircraft was to have a stepped canopy vs the round-nosed types seen on earlier versions and a belly tub that housed two forward-firing 20mm cannon. (Source: Wikipedia.com)
​THE KIT:

DML Dragon is a prolific model company based in China. They make all manner of model subjects in the popular scales

The box art shows a illustration of a Ar 234P attacking a British Lancaster. This is rather speculative, as the aircraft never got off the drawing board or was built. Except for crosses on the wing tops and the fuselage sides it is not otherwise marked and carries no swastika on the tail.

One side panel has 4 small side profiles of the Ar-234P.

This is followed by a color illustration of the decal sheet and PE fret in the kit, next to a statement that the kit is not for children under 3 because of small sharp parts they may accidental swallow. This is in multiple languages including English.

It is said that the kit is intended for modelers over 10. There is a caution to not use glue or paint near an open flame and to use them only in a well ventilated room.

The copyright of the kit is 2005, above DML's street address in Hong Kong, China and their web address.

The other side panel has 2 color photos of the model made up in the 2 green colors splinter pattern and 3 walk around photos of the unpainted model showing the armored nose twice and the landing gear.
​WHAT'S IN THE BOX:

The kit contains 2 trees of light gray parts, 2 trees of clear parts, a small fret of brass PE parts, the decal sheet, and the instructions.

The instructions consist of as single sheet that accordion-folds out into 6 pages in 7" x 10 1/4" page format.

Page 1 of the instructions begins with a black and white repeat of the box art above the parts trees illustrations. Some parts are blued-out in these illustrations as being excess and not needed to complete the model.

Page 2 begins with CAUTIONS and international assembly symbol explanations in 6 languages including English. Below them is a listing of suggested hobby paints to use to complete the model. Brands mentioned are CSI Creos Corp. Aqueous Hobby Colour, Mr. Color and Model Master Color.

The first 3 assembly steps are at the bottom of the page.

A balance of a total of 7 assembly steps is on page 3.

Page 4 has a 4-view of an Arado 234P in defense of the Reich, 1945. No unit mentioned. It is in a splinter pattern of light green and brown above light blue. It has red cowing noses and the rear-most ends of the cowling are steel colored below. It carries skeletal white crosses above the wings and on the fuselage sides and black crosses outlined in white below the wings. The fuselage code behind the cross is a black GS. A small black F1 is in front of the fuselage cross. A small number 812 is high on the rudder in black.

Page 5 has another 4-view of an Arado 234P said to be in a night-fighter scheme. Again, no unit mentioned. It is in a mottle pattern of 2 shades of grey over a dark grey undercarriage. It too has skeletal white crosses above the wings and on the fuselage sides and the black ones outlined in white below the wings. It has a black number 642 high on the rudder above 3 white silhouettes of aircraft. I assume these are kill marks. A black shield with a diving white eagle on it is on the sides of the fuselage just aft of the cockpit.

Page 6 has two more 3-views of Ar234P's. One is in the mottle pattern of 2 shades of grey over a grey undercarriage. It has white skeletal crosses above the wings, black crosses outlined in white below the wings and black skeletal fuselage crosses. There are 9 black vertical hash marks on the rudder for kill markings. It is said that this is a Ar-234P based in Berlin in 1945. No outfit is mentioned.

The other 3-view is in a splinter pattern of 2 shades of grey. It has white skeletal crosses above the wings, black ones with white border below the wings and a black skeletal cross on the fuselage sides. No other marks are shown. It is a Ar234P from a test field in 1945. Again, no unit is mentioned.

No swastika is shown on any of these schemes and none is provided in the kit.

The bottom of page 6 has the decal application instructions in the 6 languages.

Large letter A parts tree holds: The fuselage halves, horizontal tail pieces, tail skid, main wheel tires, landing gear legs, radar antenna, some cockpit parts etc. (51 parts) Fourteen of these parts are shaded out, in blue color, on the instruction sheet parts drawings, indicating that they are excess or not needed to complete the model.

​There is no letter B parts tree. 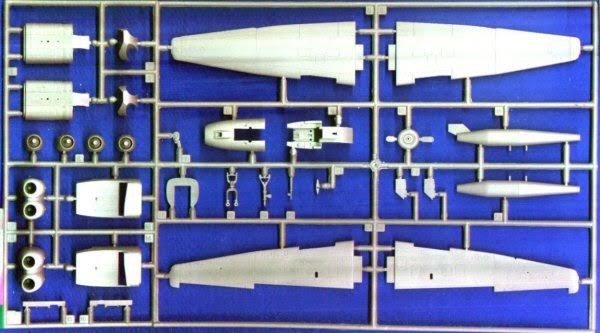 Letter J tree is also clear parts. Although there are 3 parts on this tree, only one is used.
There is no letter K parts tree.

​The final parts are a fret of brass PE and are marked as tree MA. This tree holds: wing antenna parts, 2 DF antennas, a cockpit gun-sight mounting shelf, and an under-wing pole antenna . (6 parts). 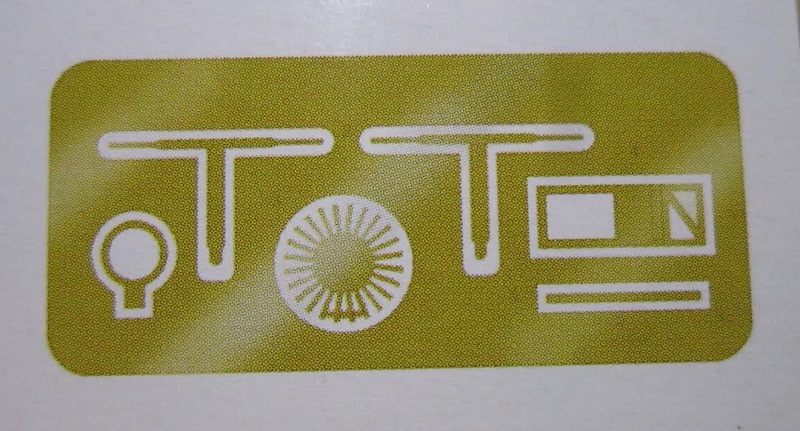 ​The decals, PE fret, and one of the trees of clear parts are packaged with a stiff cardboard insert into a cello bag. Each of the other parts tree has it’s own cello bag also.

The decal sheet is by Cartograf. It gives us a variety of various types of crosses and even some speculative kill markings as well as werk numbers for the tail of the aircraft.

However, you will have to find swastikas elsewhere as there are none included in the kit. These are missing from the kit in order to keep the kit politically correct in countries where it is sold that ban the swastika.

There is a small sheet in the kit that has corrections for the assembly of the cockpit interior details.

If you like “WHAT IF” or “Luftwaffe 1946” type German aircraft subjects, this one will be to your liking. The molding is very well detailed and flash free.
​I purchased my kit at my local hobby shop.