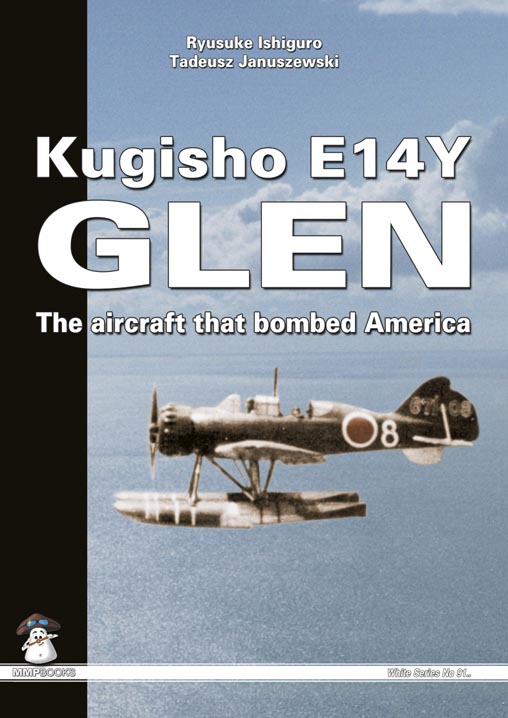 MSRP: £17.99
Mushroom Model Publications is based in the UK. They have all their books printed in English by Stratus in Sandomierz Poland. Stratus also prints their own line of books in both English and Polish.

This new book was sent to me, packaged with another new book directly from Stratus. The two books were heavily wrapped in cardboard to protect them and arrived in pristine condition.

The Japanese were the only nation in WW2 to use submarine-borne aircraft in any numbers. This book tells the story of the most important of these aircraft.

One “Glen”, launched from a submarine, was the only enemy aircraft to ever drop bombs on the US mainland – in two sorties over the Oregon forests. The Glen featured in many Japanese submarine operations throughout the war, including the first transport missions to Germany here described in detail.

In addition to full technical details of the E14Y Glen, the book describes and illustrates earlier submarine-borne aircraft, and the submarines which carried them.

Profusely illustrated with 44 black and white wartime photos, 6 1/72nd scale line drawings as 5-views, one each 1/48th 4-view, a 3-view and a 6-view line drawings. There are 2 maps, 14 data lists giving info about the aircraft and the submarines that carried them. There are 21 full color profiles. Five of these are 2-views, 3 of them are 2-views and one is a 4-view. One of the 3-views is of the Glen that bombed Oregon. One of the profiles is of a Glen in Indonesian Air Force markings. The color profiles are a mix of 1/48th and 1/32nd scales, There is a color profile included of a German Fa-330 Bachshelz reconnaissance gyro glider (no scale indicated) and the Japanese sub I-25 that launched the raid on Oregon (no scale for this one either).

There are 31 photos and drawings from tech manuals and a color drawing of a Japanese bomb.

Included also are line drawings of the submarines I-5, I-6, I-7 and I-9 to no particular scale. One of the black and white photos is of the pilot that flew the Glen on the Oregon raid: Warrant Officer Nobuo Fujita.

Two scuba divers: Dan Farnham and William McCash dove on sunken Japanese ships in Kwaja;lein Atoll in the Pacific and photographed remnants of Glens aboard the Akibasan Maru in full color. There are 30 of these photos.

The last page of the book is the bibliography.

This book will prove to be essential reading for aircraft historians, modelers and enthusiasts.

I want to thank Dr. Roger M. Wallsgrove, Editor-in-Chief of Mushroom Model Publications (MMP) and the folks at Stratus for this review sample.

Information about all MMP books can be found on their web site at: www.mmpbooks.biz