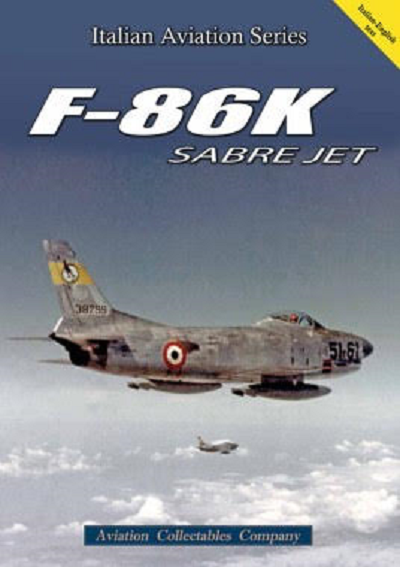 The North American F-86 Sabre, sometimes called the Sabre-jet, is a transonic jet fighter aircraft. Produced by North American Aviation, the Sabre is best known as the United States' first swept-wing fighter that could counter the swept-wing Soviet MiG-15 in high-speed dogfights in the skies of the Korean War (1950–1953), fighting some of the earliest jet-to-jet battles in history.

Considered one of the best and most important fighter aircraft in that war, the F-86 is also rated highly in comparison with fighters of other eras. Although it was developed in the late 1940s and was outdated by the end of the 1950s, the Sabre proved versatile and adaptable and continued as a front-line fighter in numerous air forces until the last active operational examples were retired by the Bolivian Air Force in 1994.

Its success led to an extended production run of more than 7,800 aircraft between 1949 and 1956, in the United States, Japan, and Italy. In addition, 738 carrier-modified versions were purchased by the US Navy as FJ-2s and -3s. Variants were built in Canada and Australia.

The Canadair Sabre added another 1,815 airframes, and the significantly redesigned CAC Sabre (sometimes known as the Avon Sabre or CAC CA-27), had a production run of 112. The Sabre is by far the most-produced Western jet fighter, with total production of all variants at 9,860 units.

Introduction to service: 1949, with USAF

Aviation Collectables Co. is based in Italy.

The text is in Italian and English.

The cover art shows a color photo of two F-86Ks in flight above the clouds.

Both are bare metal with black noses. The one in the foreground has black serial no. 51-61 on the side of its nose and Italian Air Force roundels on the sides of its fuselage. On its tail there is a yellow horizontal bar with a white circle outlined in black with a black cat pouncing on a mouse on it.

The second F-86K is too far in the distance to make any serial no. out on it, but you can see a yellow bar on its rudder. Most likely with the cat insignia on it too.

There is a etched plastic patch that is a white circle outlined in black with a black cat grabbing 3 green mice and the words 51 AEROBRIGATA and 51 STORMO on it.

Another patch that is a tan shield outlined in black with a black prancing horse on it and 4 AEROBRICATA F. BARACCA on it.

36th Stormo’s white shield with a red devil and black dragon on it that is their early shield and a later version blue shield with a silver eagle on it in flight holding a yellow lightning bolt and 36 STORMO CON L’ALA TESA GLORIA O MORTE on it.

A black shield outlined in orange with a female archer on it and 5 STORMO.

For black and white photos there are: 3 of F-86K’s in U.S. Air Force markings, 36 in Italian Air Force markings, a photo inside the Fiat workshop, a page out of a maintenance manual, a black hexagon insignia for the 1st Stormo with a white indian archer and INCOCCA TENDE SCAGLIA on it.

A black illustration of the engine.

There is a short acknowledgement and bibliography at the end of the book.

This book will be of interest to both modelers and aviation enthusiasts alike.
​Highly recommended.
​I want to thank Casemate Publishers for this review sample. Casemate is the North American distributor of Aviation Collectables Co. books and all their titles can be viewed on Casemate’s web site at:
www.casematepublishers.com