The Vought F4U Corsair is an American fighter aircraft that saw service primarily in World War II and the Korean War. Demand for the aircraft soon overwhelmed Vought's manufacturing capability, resulting in production by Goodyear and Brewster: Goodyear-built Corsairs were designated FG and Brewster-built aircraft F3A. From the first prototype delivery to the U.S. Navy in 1940, to final delivery in 1953 to the French, 12,571 F4U Corsairs were manufactured, in 16 separate models, in the longest production run of any piston-engined fighter in U.S. history (1942–53).

The Corsair was designed as a carrier-based aircraft but its difficult carrier landing performance rendered it unsuitable for Navy use until the carrier landing issues were overcome by the British Fleet Air Arm. The Corsair thus came to and retained prominence in its area of greatest deployment: land based use by the U.S. Marines. The role of the dominant U.S. carrier based fighter in the second part of the war was thus filled by the Grumman F6F Hellcat, powered by the same Double Wasp engine first flown on the Corsair's first prototype in 1940.

The Corsair served to a lesser degree in the U.S. Navy. As well as the U.S. and British use the Corsair was also used by the Royal New Zealand Air Force, the French Navy Aeronavale and other, smaller, air forces until the 1960s. Some Japanese pilots regarded it as the most formidable American fighter of World War II, and the U.S. Navy counted an 11:1 kill ratio with the F4U Corsair.

Heller is an old prolific model company based in France. They make all manner of model subjects in the popular scales.

This kit came in a shrink-wrapped end opening type box. I am no fan of this type of box, because parts or the decal sheet invariably find their way past one of the end flaps to become lost forever. Give me a tray and lid type box any day of the week.

The box art shows a F4U-1 attacking a ship that is on fire. It has a navy blue spine over intermediate blue sides and a white undercarraige. There is a black and white skull and crossbones pirate flag logo on the sides of the cowling. It has 5 victory over Japanese aircraft marks under the canopy, followed by a white no. 3. U.S. star with bars insignia is in the usual 4 locations.

The bottom of the box lists the names of 33 other aircraft kits that Heller markets. I assume they are all to 1/72nd scale.
​WHAT'S IN THE BOX:

The kit contains 3 medium grey parts trees, a clear tree, the decal sheet, the instructions and a slip of instructions of how to use the glue ampule that is supposed to be in the kit. However, there is no ampule in the box. I'm glad, because in the past these ampules have ruptured and really caused a mess.

The instructions consist of a single sheet printed on both sides in 8 1/4" x 12" page format, folded twice to fit the box.

The face side of the sheet has a one paragraph history of the Corsair, followed by names of the parts, painting instructions, assembly instructions, a single exploded drawing for assembly, over two 2-views for schemes.

This side of the sheet is all in French.

The other side of the sheet repeats all this, minus the exploded drawing and the 2-views in English and German. 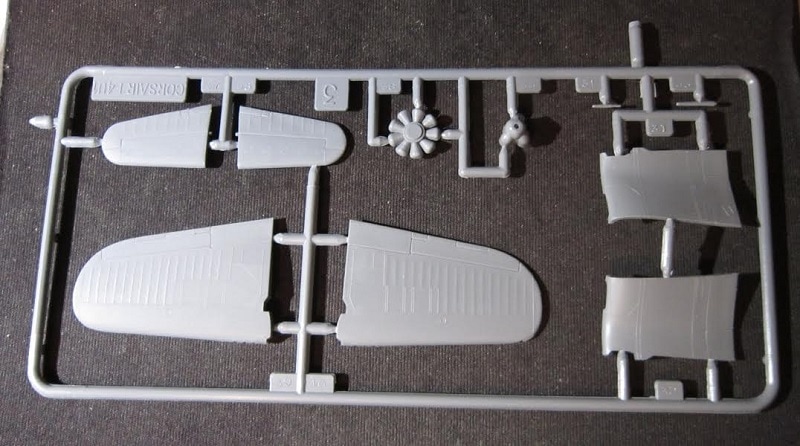 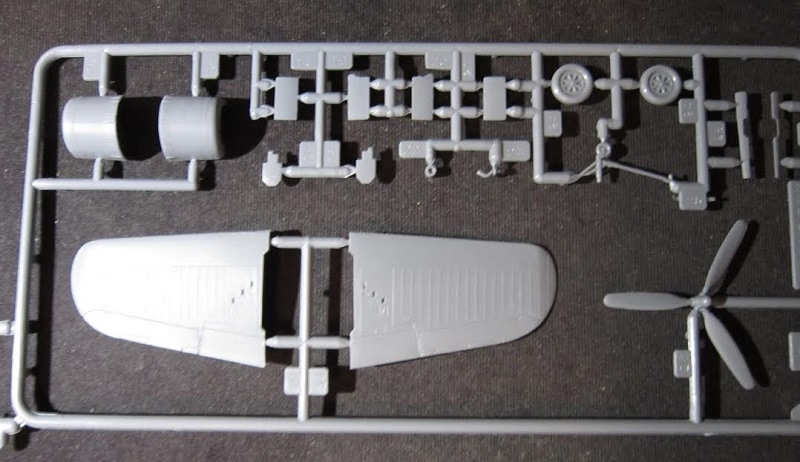 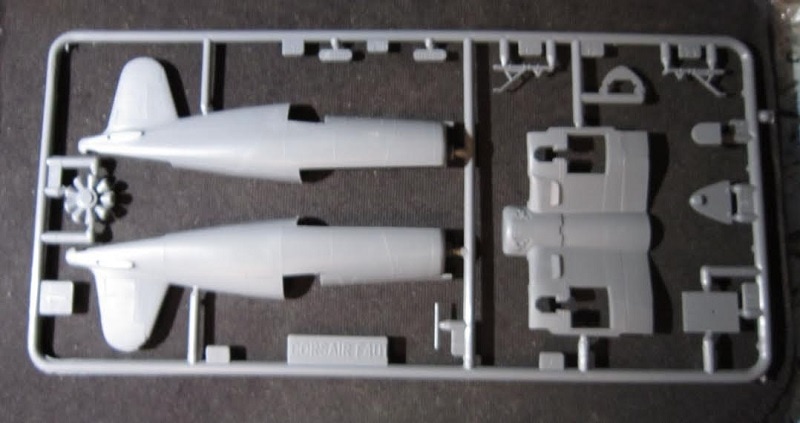 ​The clear tree holds 2 parts of the canopy. Because it is in 2 parts it can be displayed open or shut, There is no pilot figure included 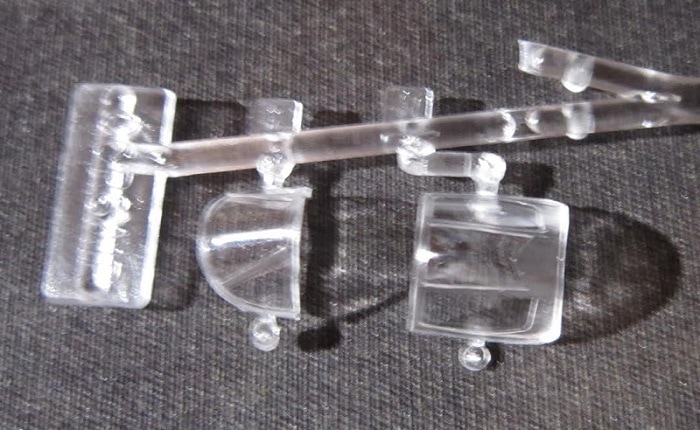 ​Trees are not alphabetized and not illustrated in the instructions. However, they do have part number tabs next to the parts on the trees.

Part trees are not cello bagged.

The control surfaces are molded solid and panel lines are of the raised variety.

The decal sheet has a frosted film provided to protect its face. However. This film was floating around the box and not protecting a darn thing. So, I stapled it to the decal sheet. 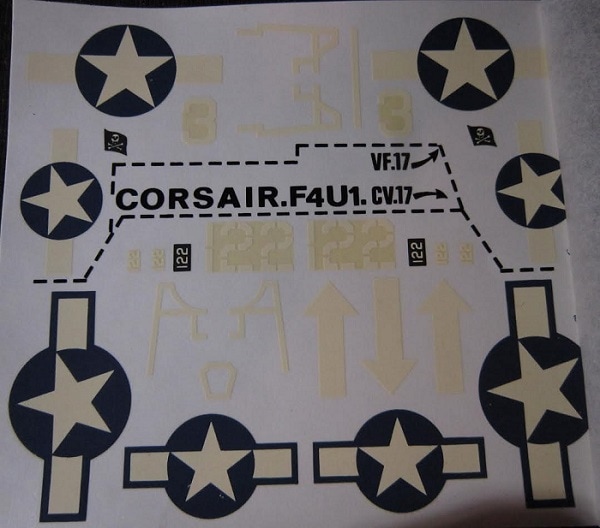 ​The slip of instructions for how to use the glue ampule completes this kits contents. 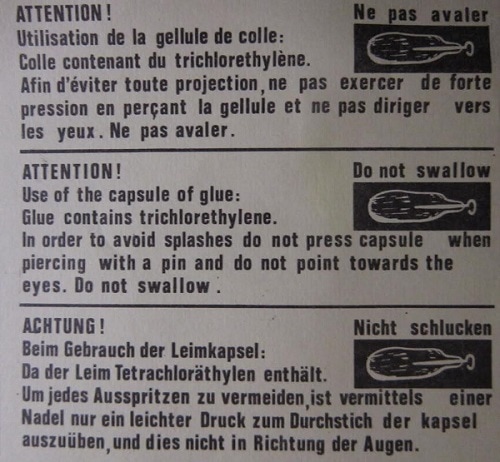 This is a nice older kit of a Corsair.