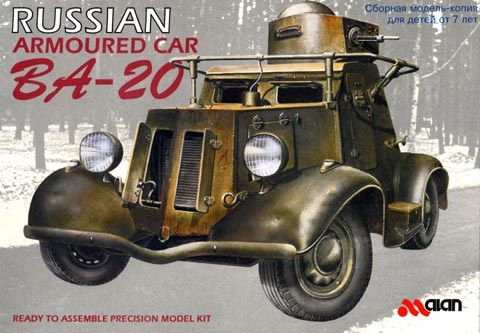 In the 30’s, armies of many countries used civilian light vehicles for reconnaissance and liaison purposes. However, their impracticality for combat demanded  an armored body and automatic firearms. By 1936, in line with the previously designed vehicles of this type, the BA-20 light armored vehicle was developed in the USSR on the chassis of the civilian GAZ-M1 motor car. The body was welded with thin armor plates, and a DT tank machine gun with shoulder rest was installed on a ball support in the front of the turret.  The gunner also served as the vehicle’s commander. The tires of the BA-20 were fitted with spongy rubber, making them resistant to bullet and shell splinter damage. Despite the increased body weight, good tractive capacity of its serial engine enabled the armored car to cross almost impossible areas. A version of the vehicle was designed to travel on a standard railroad track. This was obtained simply by mounting metal rims on the standard tire wheels.

The BA-20 was in production for five years, with minor upgrades, and it became one of the most widely used armor cars of the Red Army. It was first engaged in combat during the conflict with the Japanese Army in 1939 on the river of Khalkin Gol in Mongolia. In the course of the USSR aggression against Finland in 1940 a certain amount of these vehicles was captured by the Finish Army and were used until 1945. The BA-=20 armored cars were actively used by the Red Army at the first stage of repelling the German blitzkrieg on Russian territory.

Alan was a model company based in St. Petersburg Russia. It went out of business and it’s kit molds went to Ark and Marquette brands.

The box art shows an illustration of a BA-20 against a whited-out forest behind it. It is in overall dark green with no markings.

One side panel of the box shows a color profile of a BA-20 in overall dark green and another profile of one in winter white-wash. Made in Russia is also mentioned here.

The other side panel has color box arts of 2 other kits that Alan marketed and this kit’s box art again too.

The other two are:

The ends of the box have Alan’s P.O. Box address in St. Petersburg back when the company still existed.

Inside the box is one light gray tree, one blue gray tree and one jet black tree of parts, the decal sheet and the instructions. In some boxing's of the kit the black tree was a different color of plastic, as I show here.

The instructions consist of a single sheet, folded in the center to create 4 pages.

Page 1 begins with a black and white repeat of the box art. This is followed by the history of the BA-20 in Russian, English and German.

Pages 2 and 3 give a total of 6 assembly steps.

Page 4 is the painting and marking illustrations. It is a two-view line drawing with a list of markings below it to choose from to mark the car. 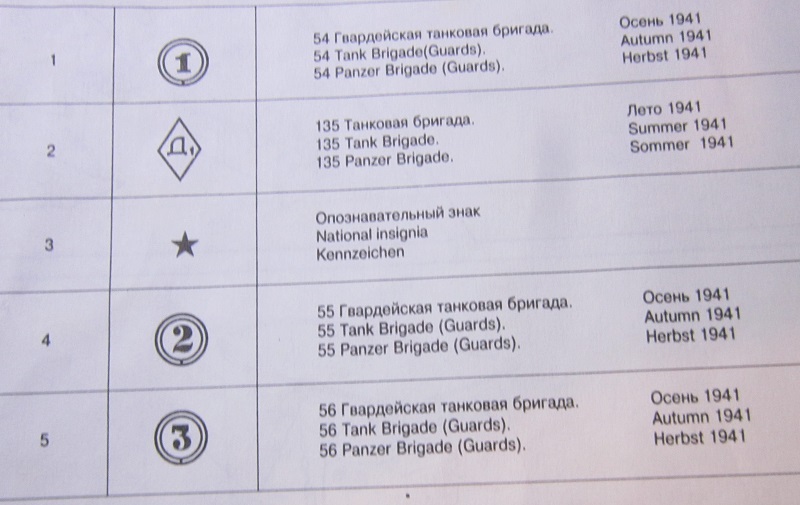 All of these markings are printed in white on the decals and there are also white numbers 0 to 9 on it I found it impossible to get these marks to focus that you can see them when photographed. They disappear against the white paper backing. So I photographed what they look like in the instructions instead.

Below these markings Alan says “All division emblems were placed on the doors on both sides. Reconnaissance units often placed only numbers instead of unit emblems or even nothing to protect the vehicle from being spotted. In the summer most of the vehicles were painted overall standard green color (Humbrol 114). In the winter period the green surfaces were over painted with white color, easily washed off.”

At the bottom of the page is Alan’s old P.O. Box address again, their old FAX and phone numbers from before they went out of business. 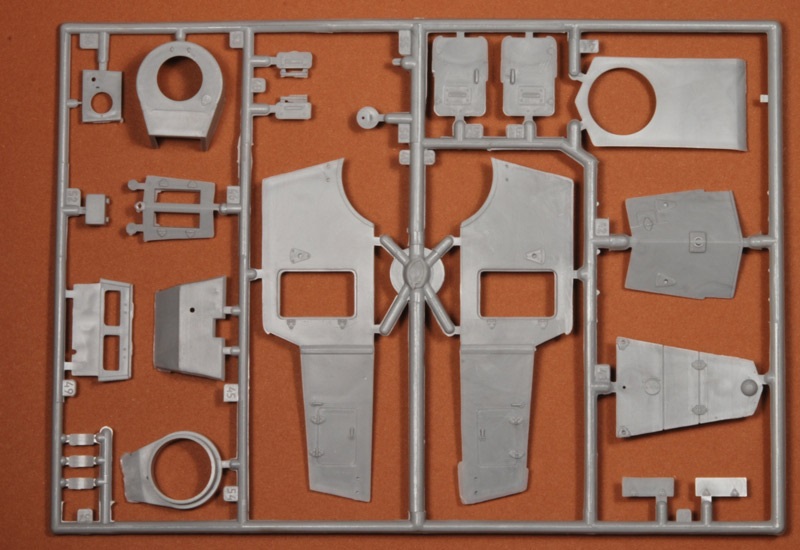 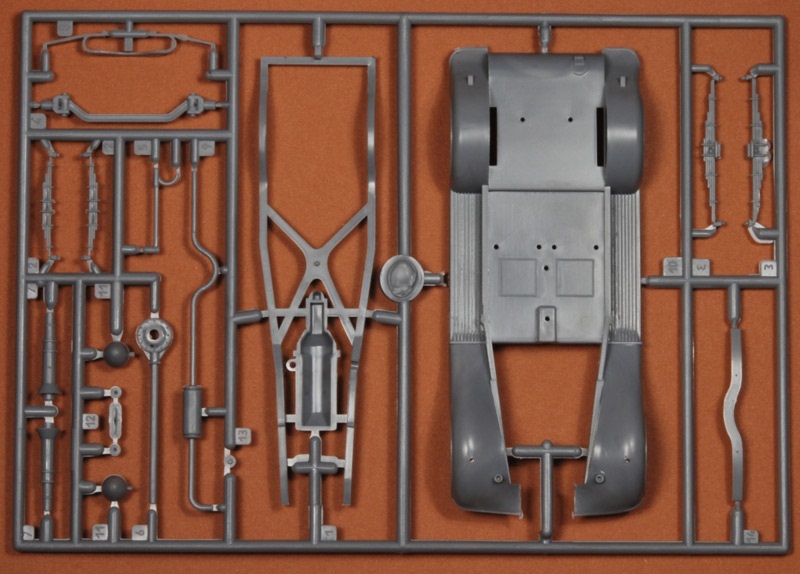 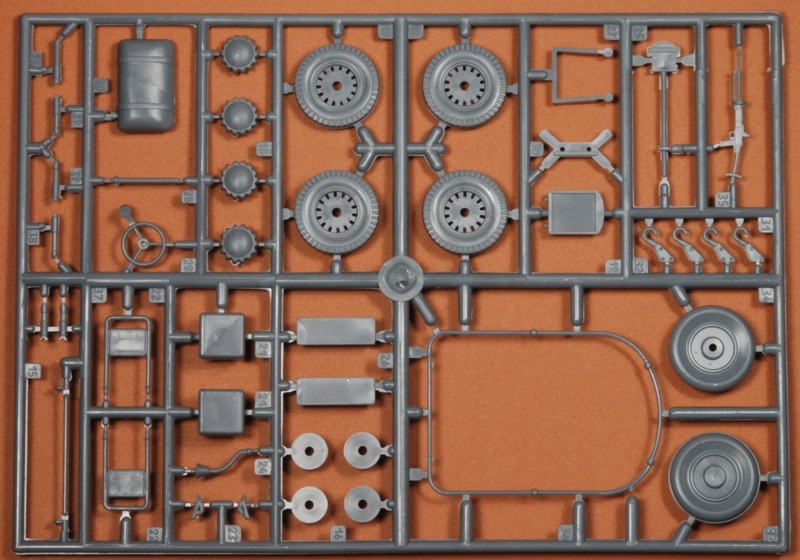 The decal sheet and instructions complete the kits contents. Part trees are not in cellos. There are no crew figures and the box is way too big for what’s in there. It is 3 ½” too long and 2 ½” too wide which creates a letter L void around the contents.

There are no  parts tree illustrations in the instructions. The trees are not alphabetized, but do have the part number tabs next to the parts. So searches of the trees will have to be done to get the right part.

I bought a sheet of Wiking brand decals that have Finish Army swastikas on it to mark the BA-20 as a captured vehicle in 1941-1942.

I also bought a couple MV Products brand clear lenses for the headlights (set no. L248). I doubt now that I will use the MV lenses as the clear lenses in the kit are better detailed.

Although the kit is out of production for Alan, it can still be found under the Ark or Maquette label now. My kit has a copyright date of 1992. Before it STC Start brand had the BA-20 in 1990. DML Dragon had it in 1993. STC Start did a second boxing of it with different box art only about this time too. RPM brand did it in the early 90’s. MAC Distributors Limited did a BA-20D with the railroad wheels and tracks in the early 90’s. Maquette did the regular BA-20 in the late 90’s, the box art was the same as this Alan kit. Ark had the kit in the late 90’s. RPM in 2000, STC Start did it with the rail wheels and track in the late 90’s and Maquette also did it that way in 2003. So, this subject has been done numerous times in 2 versions over the years.

Highly recommended. It is an easy build and I have started some assembly of my kit already.

I got my kit as a gift from  Alan Volinsky, the owner of Alan models whom I was a pen pal with years ago when he started his company. I got several other Alan kits as swaps with him too. He liked to trade me for U.S. 18 wheeler truck kits.