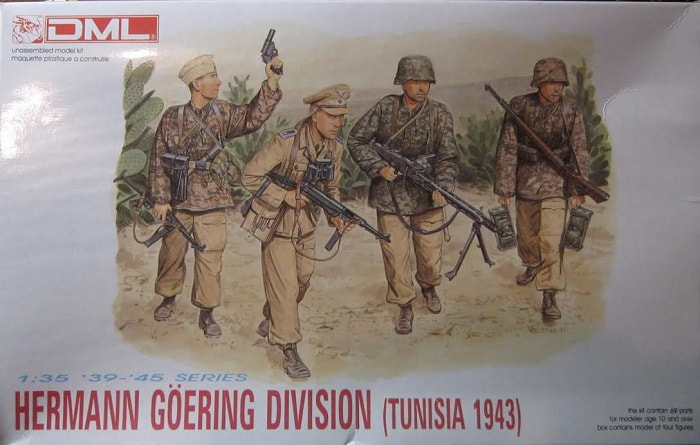 The Fallschirm-Panzer-Division 1. Hermann Göring (1st Paratroop Panzer Division Hermann Göring - abbreviated Fallschirm-Panzer-Div 1 HG) was an elite German Luftwaffe armoured division. The HG saw action in North Africa, Sicily, Italy and on the Eastern Front. The division began as a battalion-sized police unit in 1933. Over time it grew into a regiment, brigade, division, and finally was combined with the Parachute-Panzer Division 2 Hermann Göring in 1944 to form a Panzer corps under the by then Reichsmarschall. It surrendered to the Soviet Army near Dresden on May 8, 1945.Active 1935–45

This kit comes in a shrink-wrapped end opening type box. I am no fan of this type of box, because invariably parts or the decal sheet find their way past one of the end flaps to become lost forever. Give me a tray and lid type box any day of the week.

The box art shows 4 figures in a desert setting with cactus in the background.

One corner of the box art says that the kit is designed for modelers over 10 years of age and that it contains 66 parts.

Three of the figures wear camouflaged smocks over light tan trousers bloused into their shoes. The fourth figure wears an all light tan uniform with his pants also bloused into his shoes.

One figure wears a light tan soft cloth side cap on his head. He is armed with a MP44 assault rifle.

He has a holster on his belt for a flare gun and is holding the gun up in his left arm. He has a potato masher type grenade tucked under his belt and an ammo case for the MP44 slung on the belt.

The next figure in tha all light tan uniform wears a tan officer's peaked hat. He is armed with a MP40 submachine gun and has the ammo case for it on his belt. He has a pair of binoculars strung around his neck.

The third figure wears a steel helmet covered with a camoufage cover. He is armed with a MP42 heavy machine gun on its bipod.

The fourth figure also wears a steel helmet with a camouflaged cover. He has a 98K carbine slung across his chest and is carrying ammo boxes for the MG42 in both his hands.

​The other side panel says that the kit contains parts for 4 figures, paint and glue are not included. In 6 languages including English.

This is followed by Marco Polo Import, INC's. address in City of Industry, CA and their FAX number.

The copyright of the kit is 1995 and the kit was made in Hong Kong, China.

All the illustrations are done by DML's resident artist Ron Volstad. 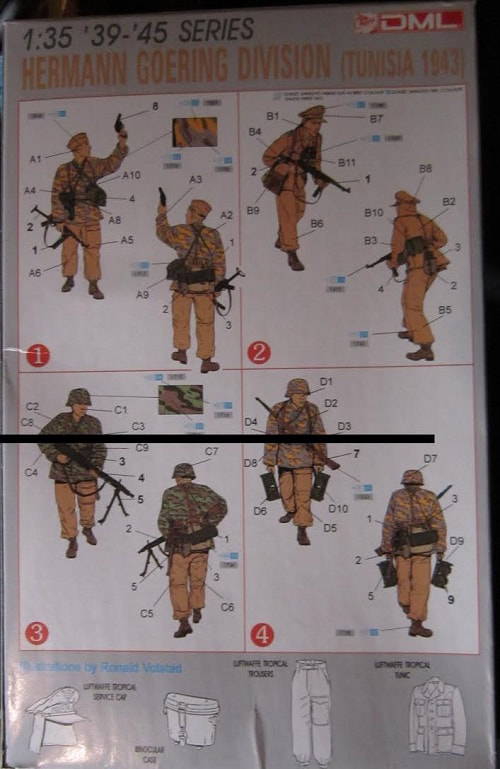 There are no decals. 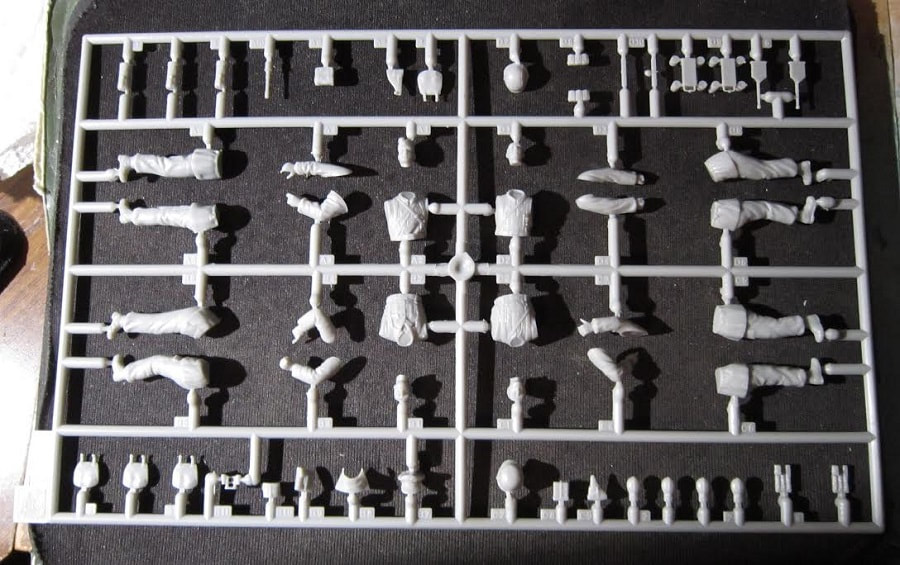 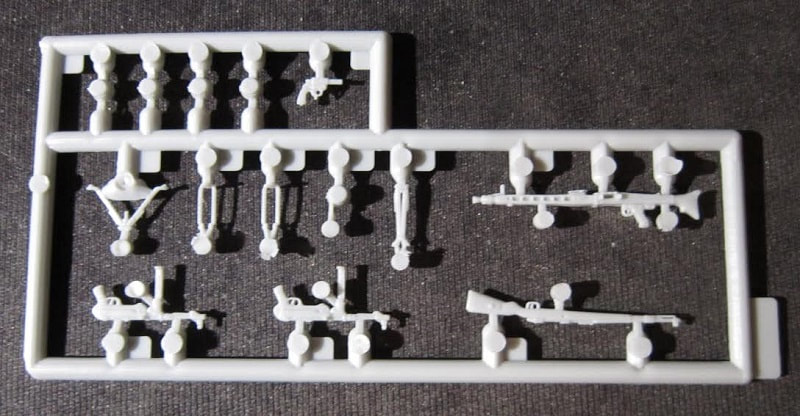 ​The molding and detail on these figures is very good. However, the poses are kind of ho-hum.
Otherwise recommended.