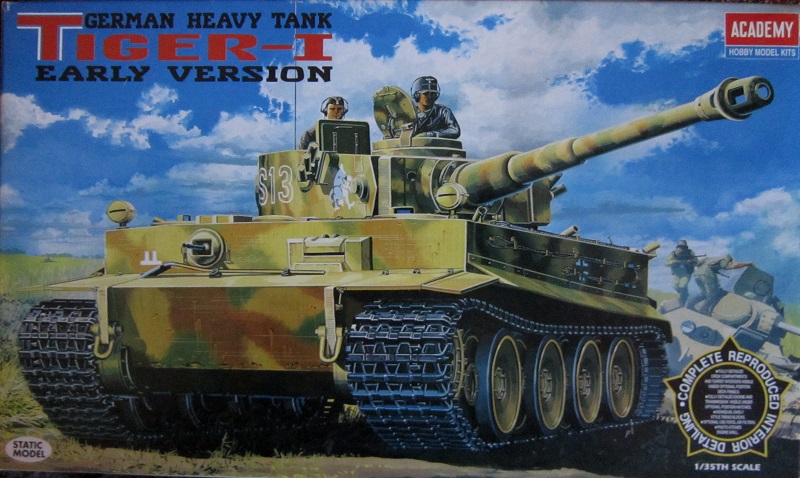 Tiger I  is the common name of a German heavy tank developed in 1942 and used in World War II. The final official German designation was Panzerkampfwagen VI Tiger Ausf.E, often shortened to Tiger. It was an answer to the unexpectedly impressive Soviet armor encountered in the initial months of the Axis invasion of the Soviet Union, particularly the T-34 and the KV-1. The Tiger I gave the Wehrmacht its first tank which mounted the 88 mm gun in its first armored fighting vehicle-dedicated version: the KwK 36. During the course of the war, the Tiger I saw combat on all German battlefronts. It was usually deployed in independent tank battalions, which proved highly effective.

While the Tiger I was an excellent design, it was over-engineered, using expensive materials and labor-intensive production methods. Only 1,347 were built between August 1942 and August 1944. The Tiger was prone to certain types of track failures and breakdowns, and limited in range by its high fuel consumption. It was expensive to maintain, but generally mechanically reliable. It was also difficult to transport, and vulnerable to immobilization when mud, ice and snow froze between its overlapping and interleaved Schachtellaufwerk-pattern road wheels in both summer and succeeding winter weather conditions, often jamming them solid. In 1944, production was phased out in favor of the Tiger II.

The tank was given its nickname "Tiger" by Ferdinand Porsche, and the Roman numeral was added after the later Tiger II entered production. The initial official German designation was Panzerkampfwagen VI Ausführung H (‘Panzer VI version H’, abbreviated PzKpfw VI Ausf. H), with ordnance inventory designationSdKfz 182, but the tank was re-designated as PzKpfw VI Ausf. E in March 1943, with ordnance inventory designation SdKfz 181.

Today, only a handful of Tigers survive in museums and exhibitions worldwide. The Bovington Tank Museum's Tiger 131 is currently the only one restored to running order.

Tiger I in northern France, March 1944

Academy is a prolific model company based in South Korea. They manufacture all manner of model subjects in the popular scales.

This kit comes in a large, sturdy shrink-wrapped tray and lid type box.

The box art shows a Tiger I crossing a grassy field under a cloudy sky. There is a knocked-out Soviet T-34 behind it with 2 German infantrymen climbing on it and one is looking inside the turret hatch. In the far distance is another tank illustrated as a black silhouette. It is unrecognizable as to what it is.

The Tiger I in the foreground is in a base of dark-yellow with red-brown and dark-green wave pattern. Two crewmen in black Panzer uniforms and each wearing headsets are standing in the turret roof hatches. The turret number is S13 that is just white outlines. On the left side of the hull front is the white unit logo for the 2nd SS Panzer Division, “Das Reich”. This tank was at Kursk, Russian 1943. A white gremlin figure is also on the turret sides. (this is one of the marking options on the kits decal sheet).

A small white oval in another corner of the box art says STATIC MODEL.

One side panel of the box has 6 color walk-around type photos of the model made up in the box art scheme and built cut-away to show the interior details. It says here again: “The kit has a fully detailed crew compartments and turret interiors visible under optional position deck panels and optional use Feifel air filters.”

The other side panel has a color photo of two Tiger I models made up.

One is a repeat of the box art subject which is cut away and the other one is enclosed except for the turret hatch being open. It is overall dark-yellow with the turret no. 712 in red with white outline and a yellow tiger on the front. This is a Tiger I of the 502nd Heavy Tank Battalion, Tunisia, Afrika Korps 1942. (this scheme is on the kits decal sheet also).


It is said here that the kit is not suitable for use by children under 36 months.

The copyright date of the kit is given as 1996 and it was made in South Korea. This is followed by a list of features in the kit in English, Spanish, French, German, South Korean and Japanese with color illustrations of the flags of the countries that speak these languages.

Features are: Kit contains one unassembled model kit and easy to follow pictorial instructions. Paint and cement are required to complete model as pictured on the box. Kit is suitable for ages 10 to adult. Scale 1/35.

A tiny silver sticker on one end of the box says “Distributed by Minicraft Models Inc., Torrance, CA 90501.

This kit contains 9 tan parts trees and 3 gray trees in 8 sealed cello bags, the decal sheet, steel PE fret, tan vinyl poly-caps, black vinyl tubes and the tan hull tub part each in a sealed cello bag, 2 tan vinyl parts that look like cloth bags and are in a zip-locked cello bag that has WARNING NOT SUITED FOR CHILDREN UNDER 3 YEARS, CONTAINS SHARP POINTS printed on the bag. These 2 parts are not shown anywhere in the instructions.

There is a large poster that has the box art on it, suitable for framing, rolled up in the box with a rubber band around it as a bonus. Neat decoration for a modeler’s work room wall.

The instructions and a small sheet that corrects the parts numbers of the parts for the main gun assembly.

The instructions consist of a staple-bound booklet of 20 pages in 8 ½” x 12” page format. 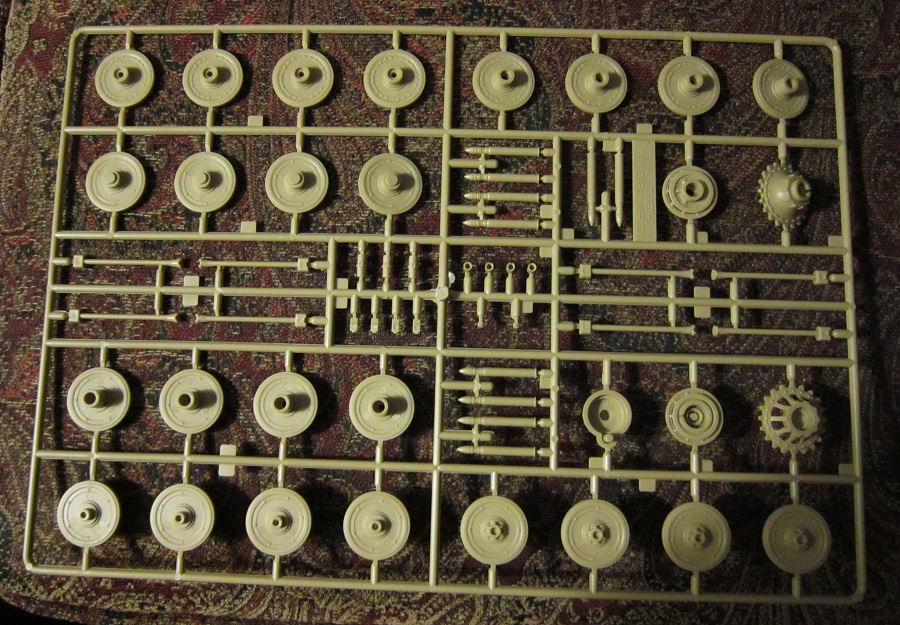 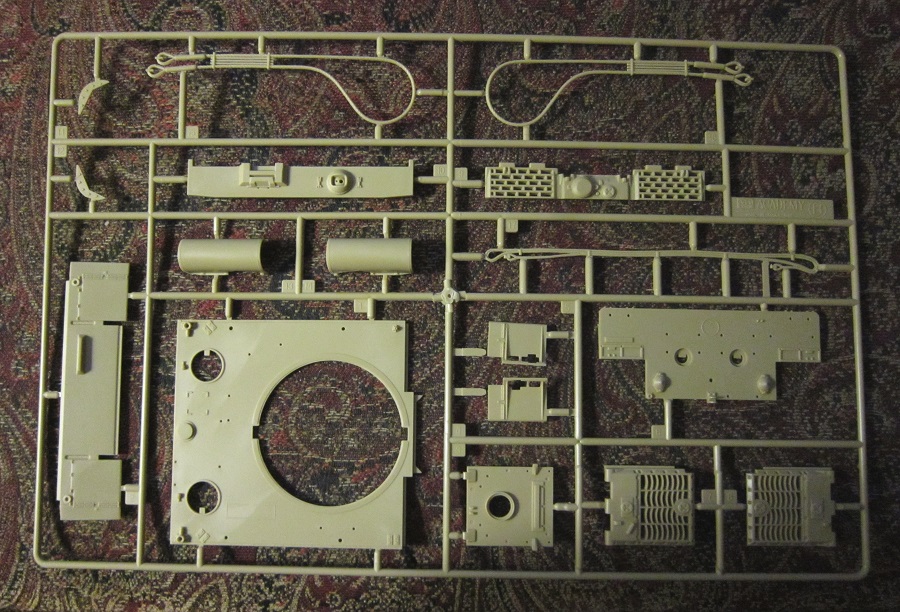 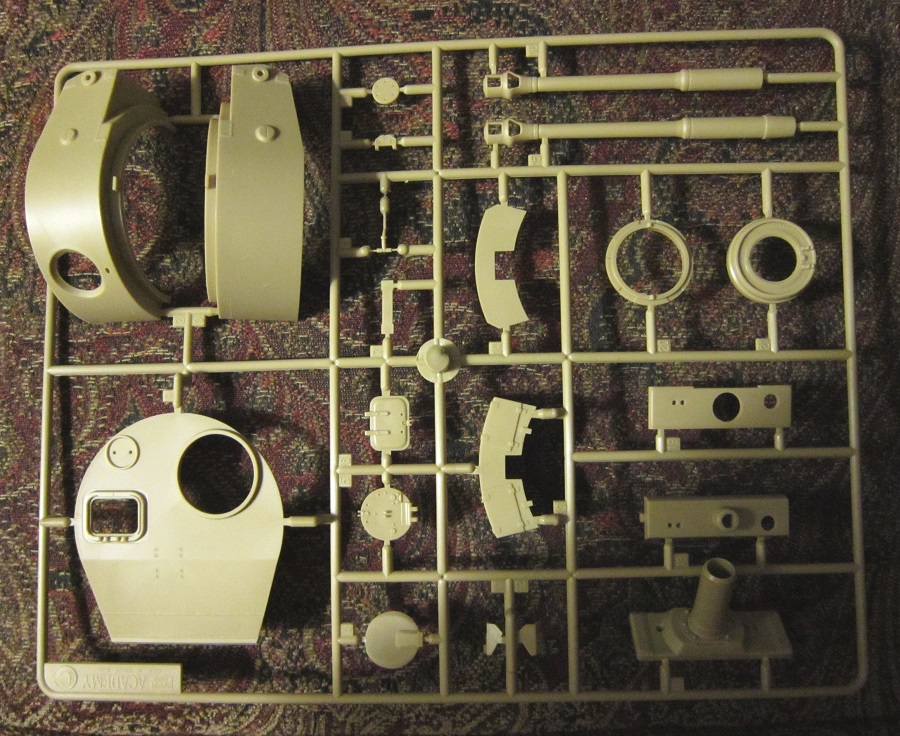 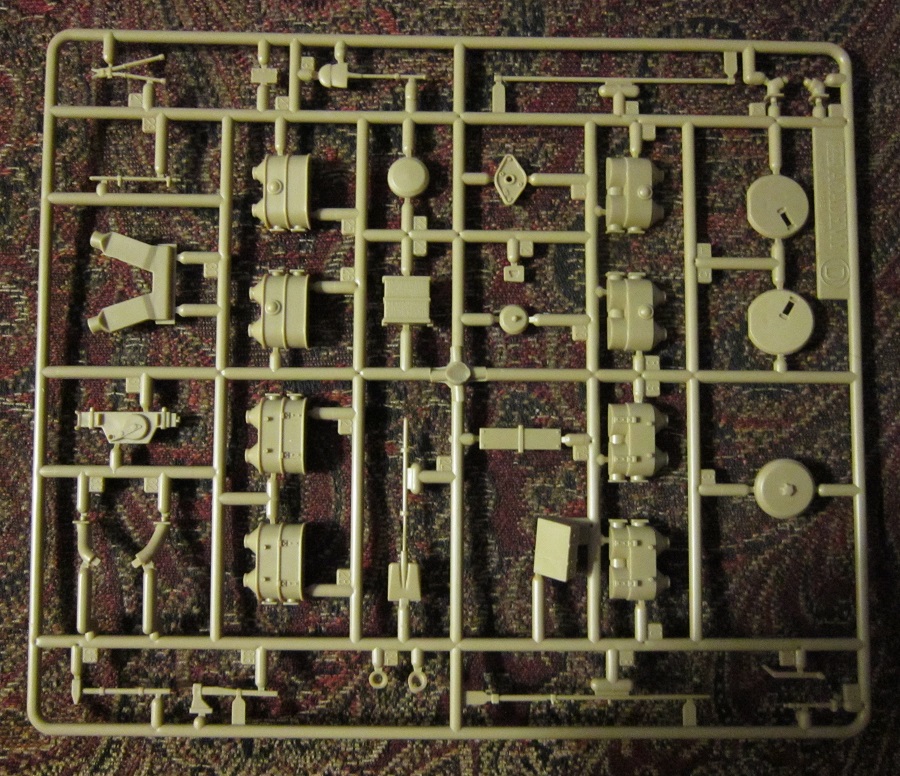 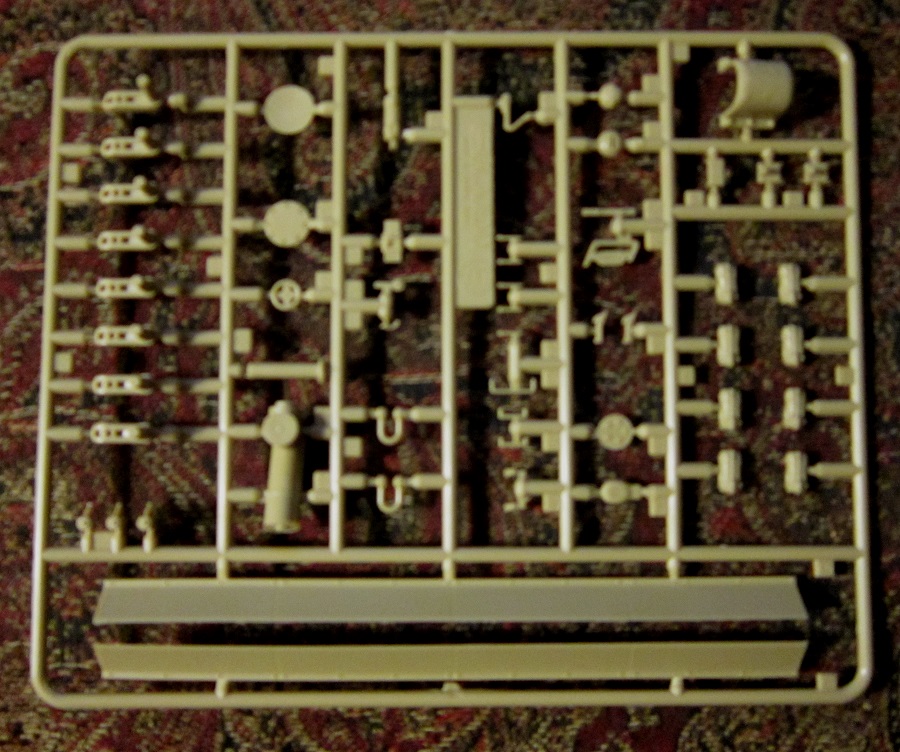 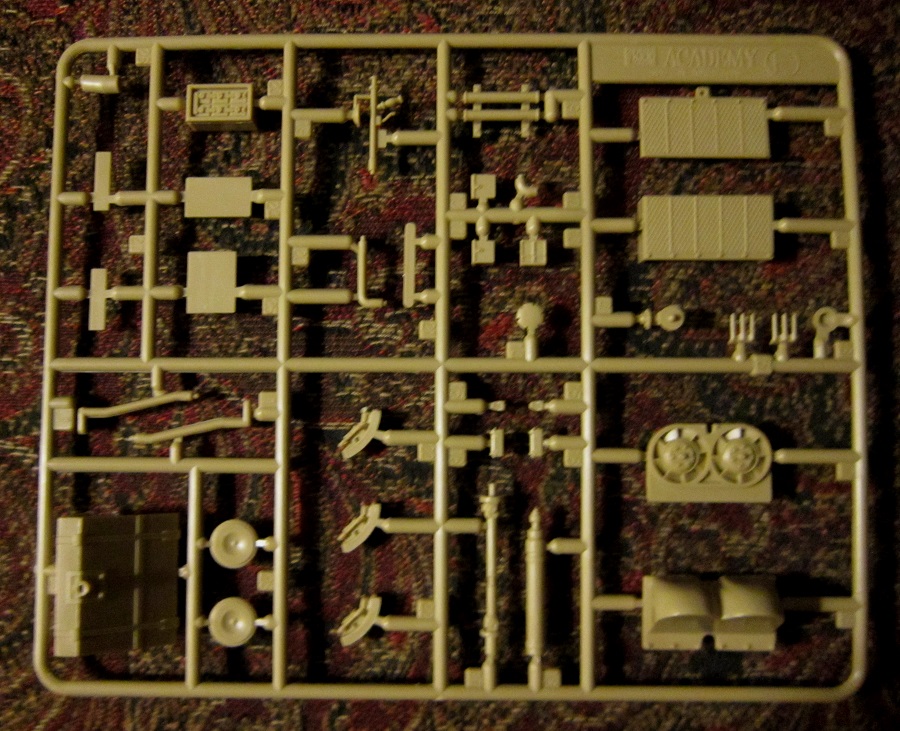 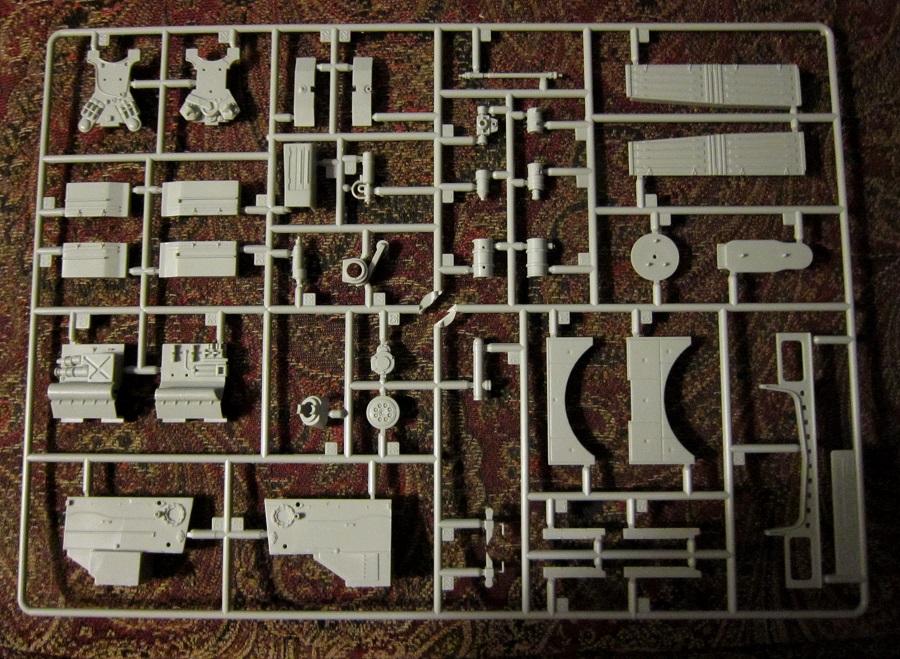 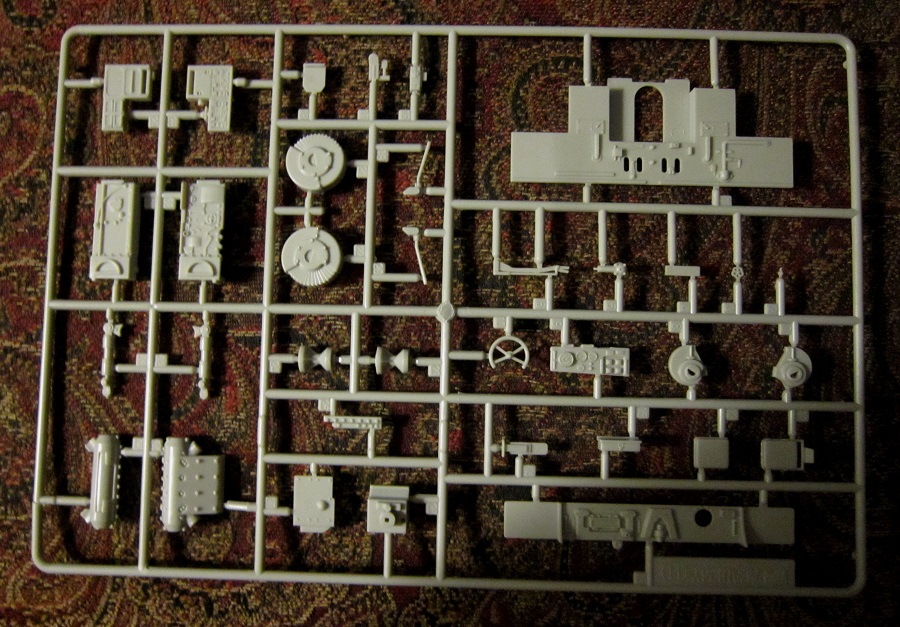 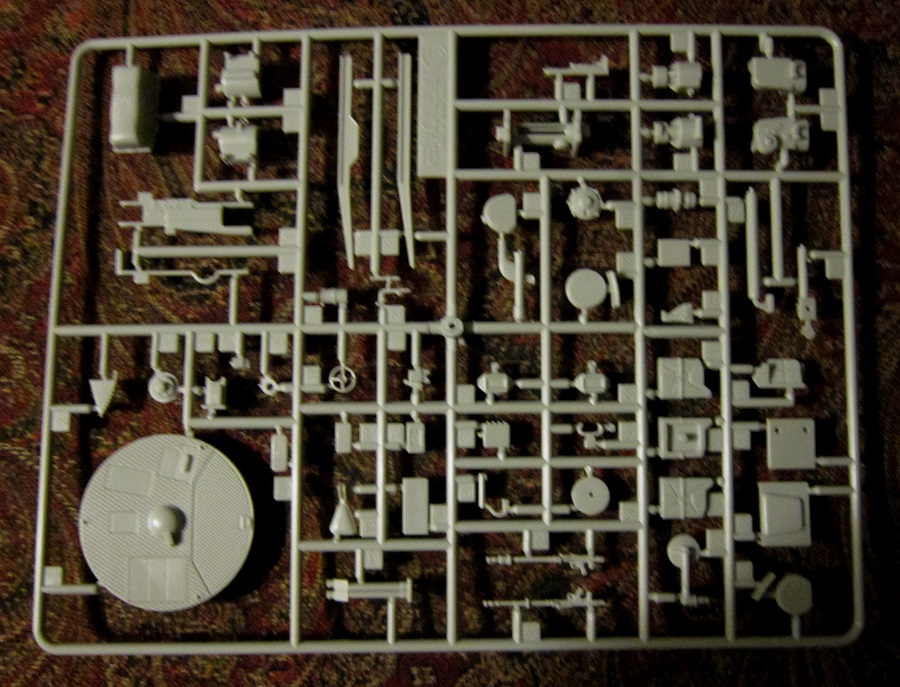 Black vinyl letter X is 4 tubes for the air cleaners. 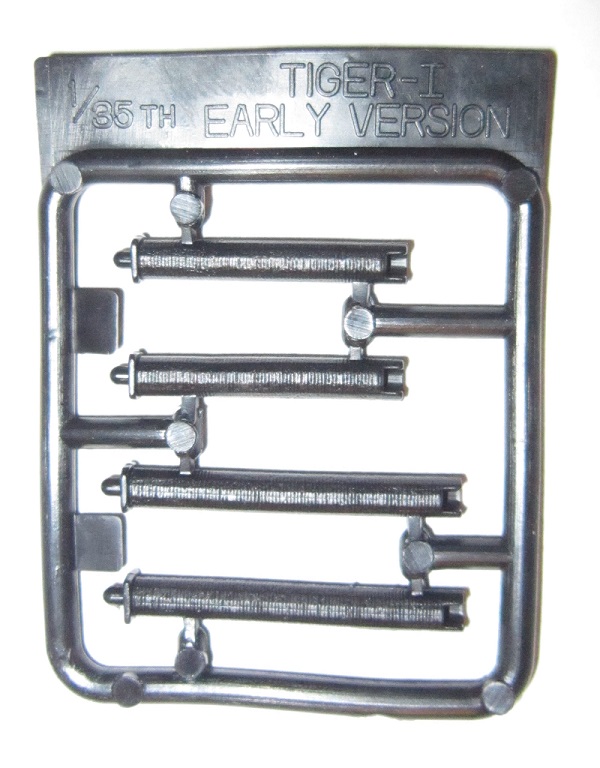 There are 4 stainless steel PE frets that hold the engine air intake screens. 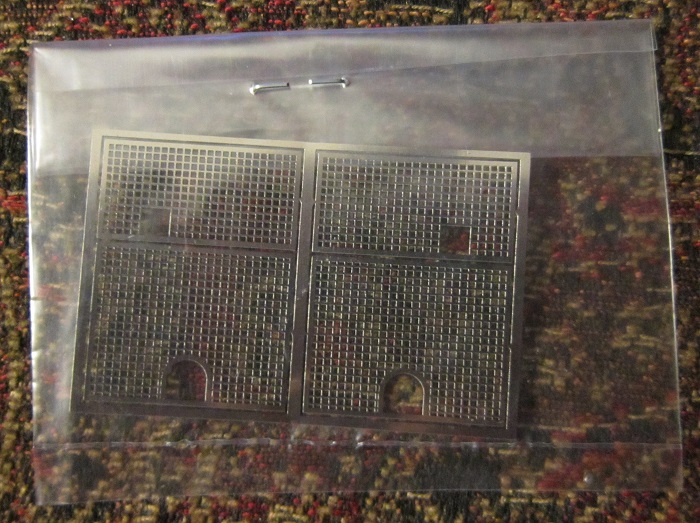 Page 1 of the instructions begins with a black and white repeat of the box art, followed by technical specifications of the Tiger I in multiple languages, including English. No history is included with these specifications, strangely.

Page 2 begins with some Korean or Japanese text. Don’t know what is being said?? Followed by the first 2 assembly steps and international assembly symbol explanations in 8 languages, including English.

Page 3 through 18 give a balance of a grand total of 28 assembly steps.

Page 19 has painting and decal placement side profile illustrations for 4 marking schemes. 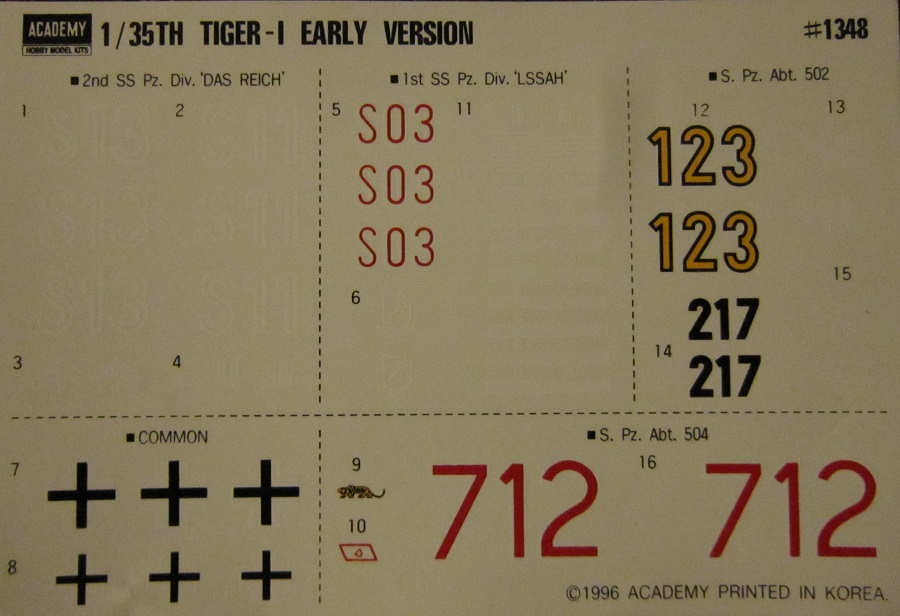 2.     A Tiger I with the 1st SS Panzer Div., “Leibstandarte Adolf Hitler”, commander Lt. Michael Wittman, Berdichev, Russia, January 1944. It is in a base of dark yellow with a patchy overcoating of flat white winter whitewash. It has black kill marking bands around the gun barrel and the turret no. S03 in black on the sides and rear of the turret and a white shield with a key on it on the front.

4.     The side panel subject of the Tiger I with the 502nd Heavy Tank Battalion, Tunisia, Afrika Korp 1943. Already described above.

Below these is a front and rear illustration of the Tiger I showing were marks go for the 4 schemes.

Page 20 has the parts trees illustrations, followed by Academy’s street address in Seoul, S. Korea and their FAX number.

This is one very highly detailed tank kit, both inside and out. Only perhaps some more conduit or wiring could be added to the inside.

Virtually everything else is THERE !! I recommend it only to modelers of advanced building skills that have a few other complex kits with high parts counts under their belts. This kit is definitely not for the novice, nor is it at all a weekend project. Should keep a modeler busy for at least a month or better.

When this kit appeared, some arm chair EXPERTS ragged on it a bit. Some said it was a Tamiya clone and had various inaccuracies. However, Cookie Sewell did a review of it and told the truth about it and said most of the complaints were not true and it was not a Tamiya clone.

I am of the school that does not count all the rivets and gets upset if one rivet is missing. Also, if it looks like a duck, smells like and duck and quacks like a duck, it IS A DUCK.

A simple error does not bother me. I am very happy with what is in this great model kit.

It is the Tiger I model to have in your stash. That bonus poster is a real nice treat too.