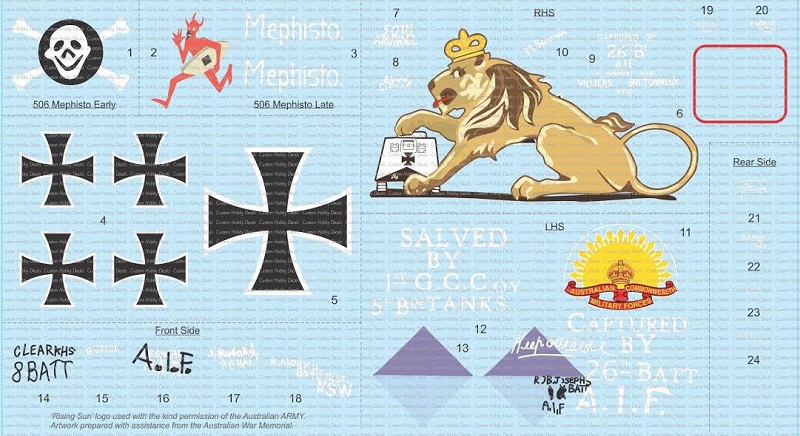 MSRP: $19.90 from Custom Hobby Decals in Sydney, Australia.
​Germany produced a total of 20 of the A7V tanks. Only "505" Mephisto survived the post-WWI era (although there is today some other full-sized recreations).

The A7V was constructed by two different firms in two different production lots that somehow incorporated changes that meant nearly every A7V varied in some regard. Based on manufacturer, there were two major hull types, with #502 - #507 built using single-plate and multi-plate ("Rochling" armor) and Buck mounted gun. Later units ("Krupp) were built with multi-plate sides and the so-called "Socle" gun.

Unfortunately, whilst it is fairly easy to convert single-plate to multi-plate, and Buck to Socle, many kit manufacturers have instead released models based on the later major version (example: the Meng Models kit).

This decal sheet allows you to model Mephisto at any of the 4 stages in its life: early war, late war or as now presented (currently at the Australian War Memorial, Canberra), and post-capture/retrieval on the battlefield.

This decal sheet has a copyright date of 2015.

I am currently building the Tauro model kit no. 106 "Totenkopf" (reviewed elsewhere here on Indy AMPS in the armor archives. I have gotten to the suspension and there are no less than 30 pairs of road wheels that go on this tank. That means no less than a whopping amount of 60 wheels total. I asked on a Armorama forum if these wheels were bare medal or had rubber tires on them.

A fellow in Sydney responded that the wheels were all bare metal. What a relief !! I sure wasn't looking forward to painting tires on 60 wheels...sheesh!!

This same fellow told me he had 2 sets of decals for "Mephisto", the tank on display near him. He sent me this set, along with a small book all about the A7V at the Australian War Memorial, Canberra. 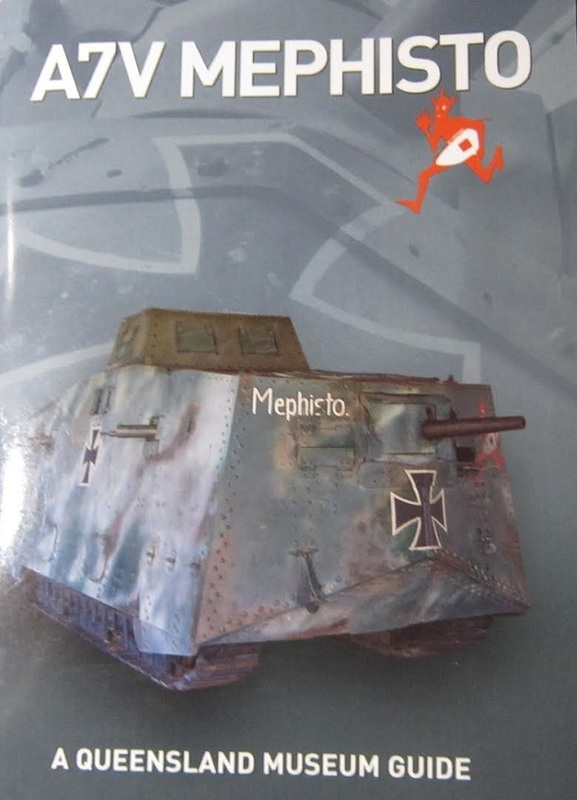 ​The book has a complete history of activities of A7V's and the fate of a few other of them. One went to Aberdeen and was on display there until 1942 when authorities decided to melt it down and use the metal for the WWII War effort. So, Mephisto is the only original survivor.

I really like the lion illustration that was painted down the side of Mephisto after it's capture. I may put that on my model.

I have both boxing's of this Tauro kit in my stash. Only difference in those 2 kits is the decal sheet, which added about 3-4 more bucks to the price.
I want to sincereIy thank Craig Moroz in New South Wales, Australia for this sheet and the neat history book.