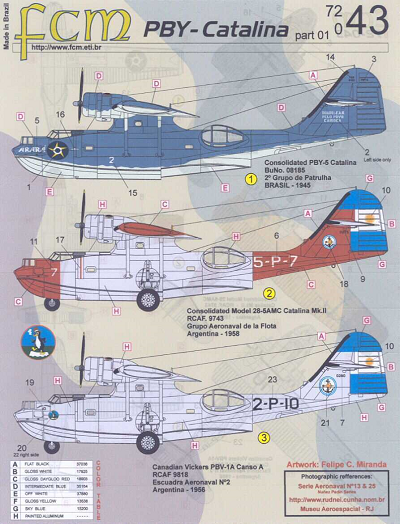 The Consolidated PBY Catalina, also known as the Canso in Canadian service, is an American flying boat, and later an amphibious aircraft of the 1930s and 1940s produced by Consolidated Aircraft. It was one of the most widely used seaplanes of World War II.

Catalinas served with every branch of the United States Armed Forces and in the air forces and navies of many other nations. During World War II, PBYs were used in anti-submarine warfare, patrol bombing, convoy escort, search and rescue missions (especially air-sea rescue), and cargo transport.

The PBY was the most numerous aircraft of its kind, and the last military PBYs served until the 1980s. As of 2014, nearly 80 years after its first flight, the aircraft continues to fly as a water-bomber (or air-tanker) in aerial firefighting operations in some parts of the world.

This decal set comes in a self-sealing clear cello bag. 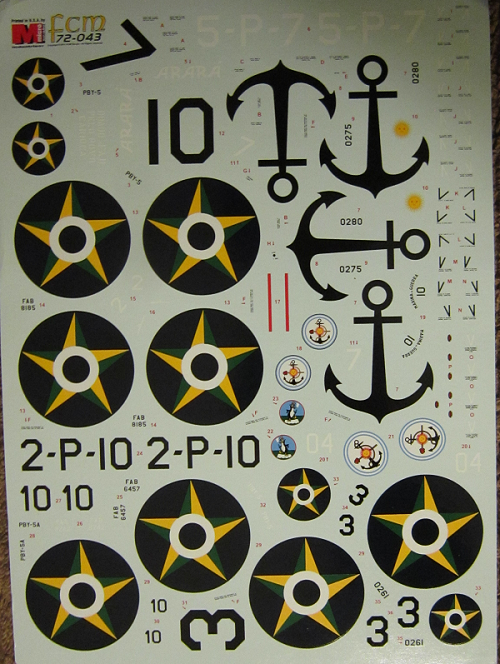 It contains one decal sheet and the instructions.

The instructions consists of a single sheet, printed in color on both sides that is 7 ¾” x 11” format, folded in the center to fit the cello bag.

The face side has 8 color profiles of the Catalina.

1.   Consolidated PBY-5 Catalina, BuNo. 08242, 2° Grupo de Patrulha, Brazil -1945 It has a dark blue spine, over light-blue sides and an off-white undercarriage. It has the Brazilian Air Force star on the sides of its nose and a small white FA9 PBY-5 over 8242 high on the rudder sides and white O4 under the elevators. It has a black leading edge on its rudder.
​2.   Boeing Canada PB2B-1, Canso RCAF 9775, Grupo de Reconocimiento  Uno Argentina -1951. It is overall painted aluminum, with a black rudder leading edge. It has a logo on the side of its nose of a blue circle with a penguin on it that is wearing a top hat, smoking a cigarette and carrying a walking stick. This is followed by a black 3. It has a black fuselage no. 2-P-3 on its sides, blue & white bands on the rudder with a small yellow sun-burst on the white band and a small black serial no. 0261 under the elevators.

3.   Canadian Vickers PBV-1A Canso A RCAF 9818, Escuadron Aeronaval N°2, Argentina -1956. It is in the same scheme as the no. 2 profile. It’s fuselage no. is 2-P-10 and the serial no. under the elevators is 09280. Also under the elevators is a logo of a white circle with black anchor on it that has a yellow sun-burst on it. The rudder has a black leading edge. 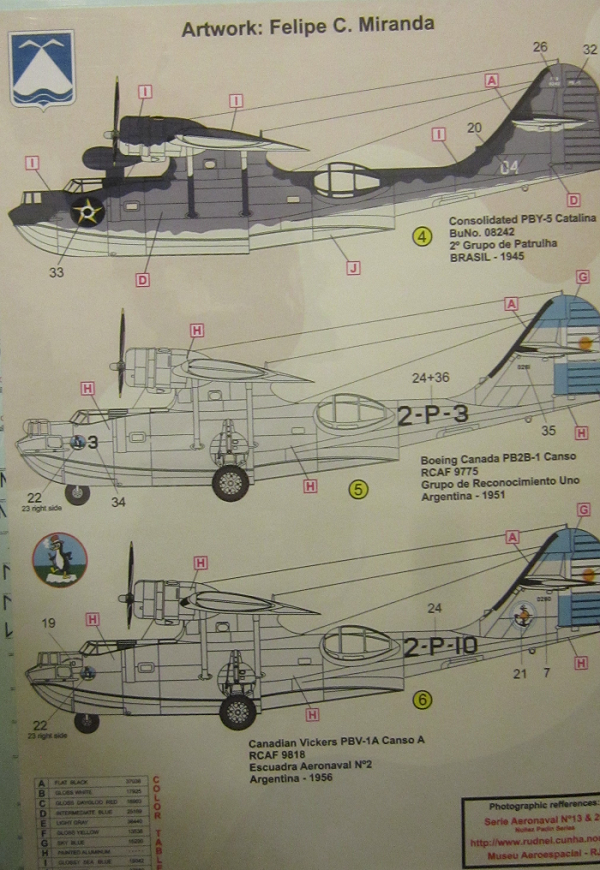 ​4.   Consolidated PBY-5 Catalina, BuNo. 08185, 2° Grupo de Patrulha, Brazil -1945. It is overall medium-blue with a light-grey undercarriage. It has the Brazilian Air Force star on the sides of its nose behind white ARARA, a small white no. 2 low on the fuselage sides under the wings, a black leading edge on the rudder and white DOADO a F.A.B. over PELO POVO over CARIOCA under its elevators. High on the rudder is small black serial no. FAB over 8185 PBY-5.

5.   Consolidated PBY-5 Catalina, BuNo. 46457, 2° Grupo de Patrulha, Brazil -1945. It is overall intermediate blue over a light-grey undercarriage. It has the Brazilian Air Force star insignia on the sides of its nose. It has a dark blue fuselage spine over light blue sides and an off-white undercarriage. It has the Brazilian Air Force star on the side of its nose, a black leading edge on the rudder and black serial no. FAB over 6457 PBY-5A high on the rudder and a black no. 10 below the elevators.

6.   Consolidated Model 28-5AMC Catalina Mk.II, Grupo Aeronaval de la Flota, Argentina – 1858. It is painted aluminum with a bright red nose and rear fuselage. The rudder flap is divided into blue, white, blue bands with a yellow sun-burst on the white band. The rudder has a white circle with a black anchor on it that has the small yellow sun-burst atop it. It has a white no. 7 on the side of its nose and a white fuselage code 5-P-7 on the red rear fuselage sides. 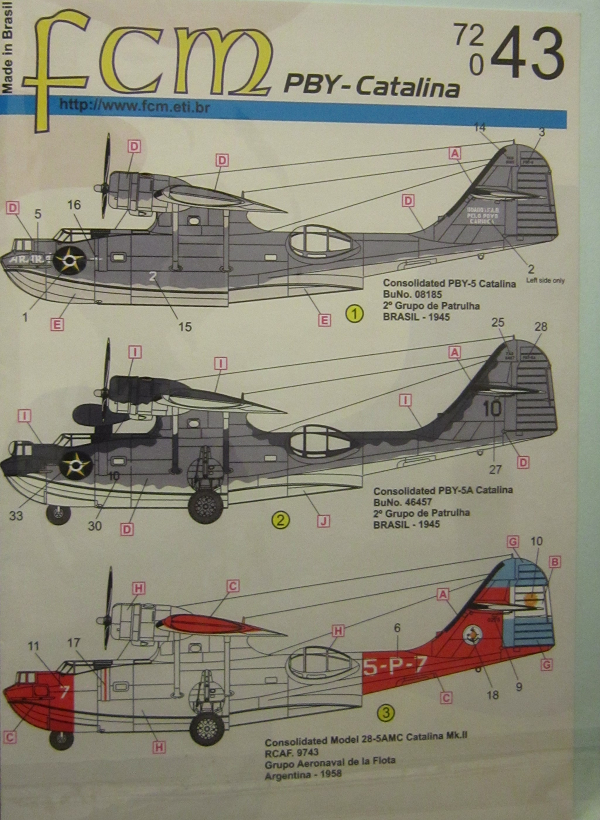 ​The reverse side of the instructions shows 4 top views and 4 bottom views for the schemes on the face side of the instructions. The Brazilian Air Force ones show the national star insignia atop and below their wings. The Catalina with the red nose and red end of its fuselage has red wing tips above and below the wings. The black anchor is under both wings. The middle section of the upper wings is yellow with the black anchor on each wing and a black no. 7 in the center. The Catalina that is all painted aluminum shows the black anchor above and below the wings, with a black no. 10 in the center of the upper wings.

All the Catalinas have black de-icers on their wing and elevators. 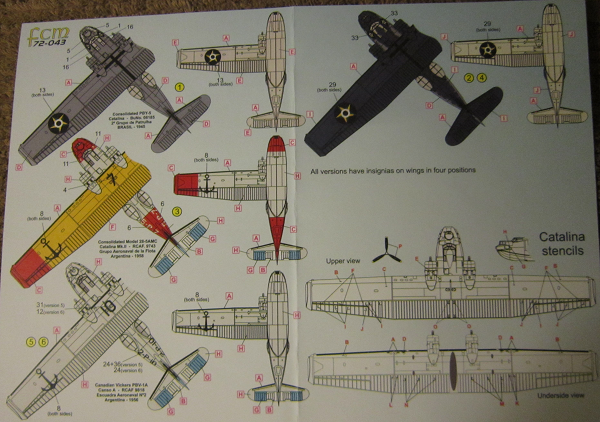 ​This is one neat decal sheet. It was manufactured in Brazil and printed by Micro Scale.

I want to thank Mr. Felipe C. Miranda, owner of FCM for this decal set. All FCM decal sets can be viewed on their site at:
http://www.fcm.eti.br