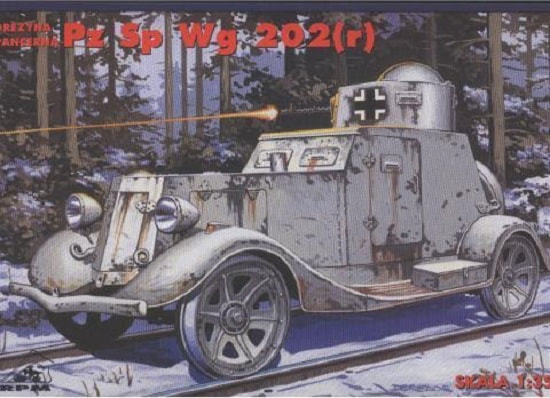 The BA-20 (Russian: Broneavtomobil 20) was an armored car developed in the Soviet Union in 1936 and used in the early stages of WWII. It was derived from the civilian GAZ-M1 car, which was itself a modified version of a Ford design, produced by the Nizhny Novgorod-based vehicle manufacturer GAZ. The BA-20 was produced at the Vykunskiy Factory.

The principal use of the BA-20 was as a scout vehicle. The BA-20's tires were designed to be resistant to bullets and shrapnel by the simple expedient of filling them with spongy rubber. A variant, the BA-20ZhD, could travel on railway lines by replacing the normal wheels with flanged metal rail-type wheels. This was the version the Germans captured and used as the Pz.Spwg. (Panzerspachwagen) BA203(r), subject of this kit.

The vehicle was exported to the Spanish Republican side of the Spanish Civil War, although the vast majority of BA-20's built served with the Soviet Red Army. They first saw combat in the conflict with Japan in 1939 on the Khalkin Gol River in Mongolia. The BA-20 was used by the Red Army in the Soviet invasion of Poland later as well as the early stages of WWII in 1941.

Production ended that same year, with some 4,800 BA-20's having been constructed by that time.
During the Winter War, Finland captured a number of BA-20 armored cars and put them into service.

In common with most armored cars derived from cars, the BA-20 was largely roadbound. The lack of all-wheel drive, high ground pressure, and low horsepower prevented it from moving cross-country except on very firm ground. The armor was too thin to stop anything other than fragments or small-arms fire, and the 7.62 mm machine gun was not adequate to penetrate other scout vehicles. The Red Army produced very few wheeled AFV's in WWII, but replaced the BA-20 with the BA-64B.

The BA-20 is often mistaken for the very similar FAI armored car. That is a French armored car. The main recognition feature is the flat roof of the BA-20; the FAI has a two dome-shaped covers over the driver's and co-driver's stations. Early BA-20s had the same vertical-sided turret as the FAI. Later models, had a conical-shaped turret.

RPM Model Co. is based in Warsaw, Poland.

This kit came in a shrink-wrapped tray and lid type blousy box. There is a letter "L" void around the parts inside.

The box art shows a BA-20 captured by the Germans on railroad tracks running through a woods in the snow.

It is overall panzer-grey covered with winter white-wash paint that shows the panzer-grey bleeding through it in spots. It carries a German cross on the turret and is firing its turret machine gun.

One side panel has a small color repeat of the box art, followed by "Model kit suitable for ages 6 to adult", Contains decals and instructions for assembly. Paints and plastic adhesive not included.

This is in 3 languages, including English and RPM's street address in Warsaw, Poland.

The decal sheet is by Rossa Graph, also located in Warsaw.

The other side panel has 5 color box arts of other AFV kits that RPM manufactures: a BA-20 ZD on railroad tracks, a French Lorraigne L37L, a "Hitler Line" pillbox, a "Stalin Line" pillbox and a Soviet T-34/85 tank.

No kit numbers are given for these and I assume they all are to 1/35th scale.
​WHAT'S IN THE BOX:

The first sheet begins with a black and white repeat of the box art, with the vehicle's history in Polish, over the parts trees illustrations, RPM's street address, telephone and FAX number in Warsaw. Poland.

The reverse side of the sheet has 4 side view profiles for schemes:

1. A Pz Sp Wg 202(r) of war correspondent from the 7th Volunteer Mountain Division "Princ Eugen", Croatia 1942. The car all in panzer-grey.

2. A Pz Sp Wg 202(r) of a police unit, Ukraine 1942. The car is in Russian green and overpainted by iregular dark-grey stripes.

The face side of the second sheet of the instructions and its reverse side give a total of 6 assembly steps.

The third instruction sheet has instructions on one side for assembly of the tracks in a straight line.

The reverse side has instructions for assembly of the tracks into a mild curve.

Part trees are not alphabetized, nor do they have part number tabs next to the parts on them. Bad move RPM ! 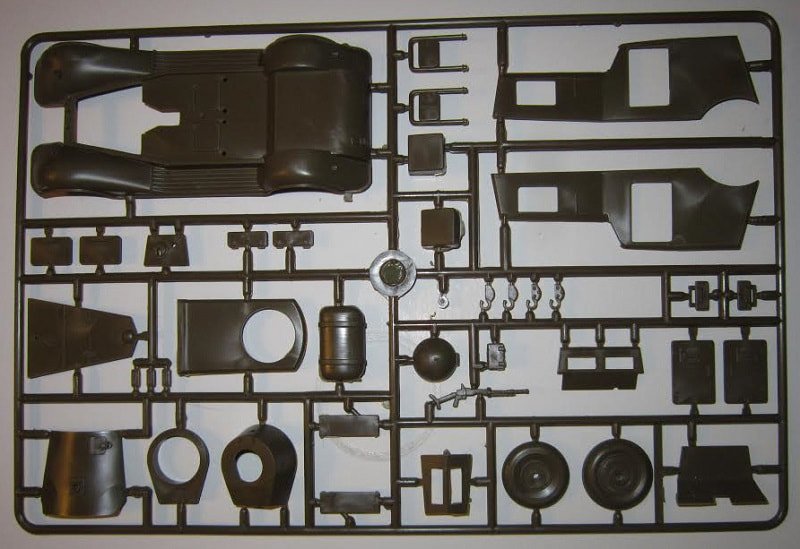 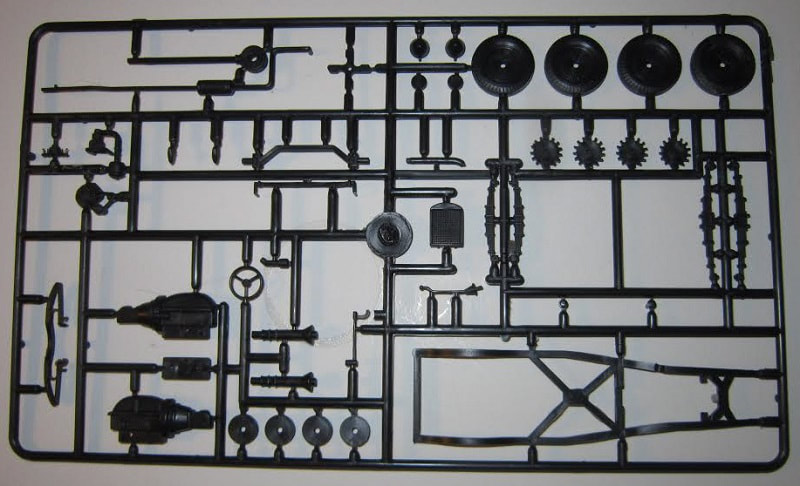 ​There are 4 identical chalk-white trees in the kit. They each hold: steel railroad wheels, rails, wood cross ties, cleats and bolts (34 parts each) 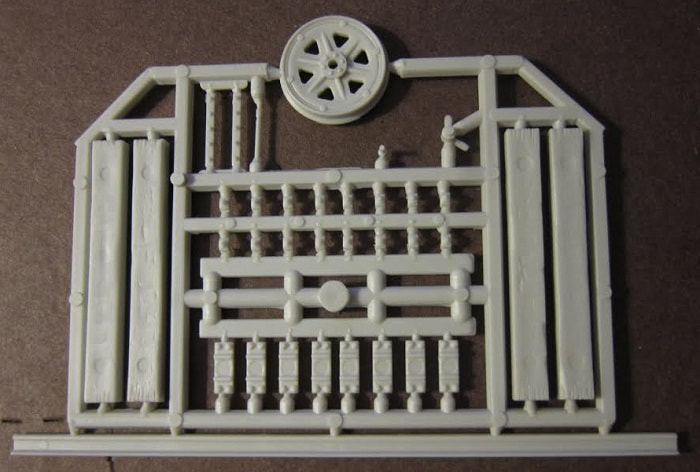 ​The chalk-white vacuformed base plate is next. 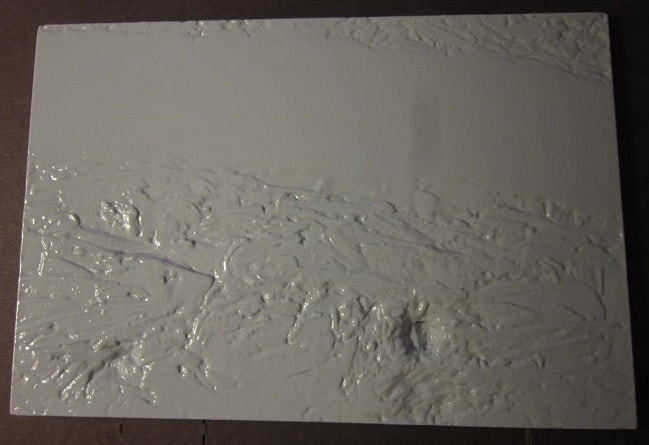 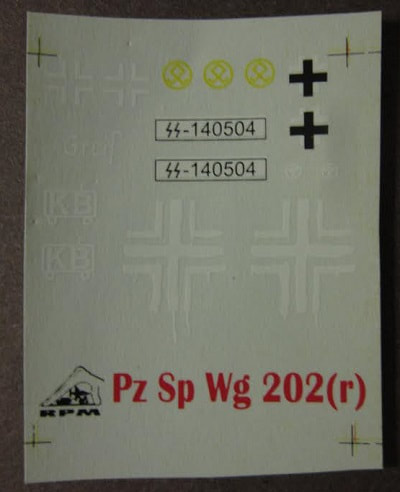 This is a neat kit, with full engine and interior detail for the cars driver's area, but no turret interior parts.

There are no figures in the kit, nor clear parts.