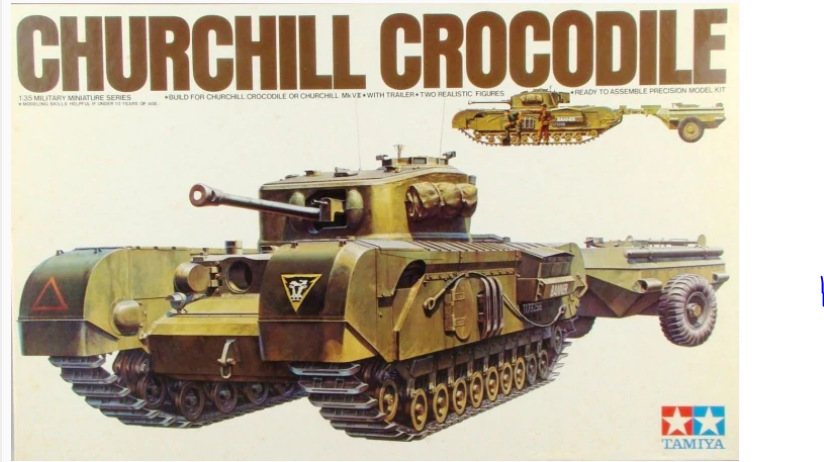 Kit no. MM200
By Ray Mehlberger

The Churchill Crocodile was a British flame-throwing tank of late Second World War. It was a variant of the Tank, Infantry, Mk VI (A22) Churchill Mark VII, although the Churchill Mark IV was initially chosen to be the base vehicle.
The Crocodile was introduced as one of the specialized armored vehicles developed under Major-General Percy Hobart, informally known as "Hobart's Funnies". It was produced from October 1943, in time for the Normandy invasion.

Tamiya is an old prolific model company based in Shizuoka City, Japan.
They manufacture all manner of model subjects in the popular scales.
This kit comes in a shrink-wrapped tray and lid type box.

The box art shows the Churchill Crocodile and it's flame fuel trailer posed against one of Tamiya's signature all white backgrounds that they use for the majority of their box arts.

The tank and trailer are overall khaki, with a tan canvas tarp rolled up and attached to the side of the turret. It has a white slogan "BANNER" on the side of the skirts. with white serial no. T173258 below it.

The upper right corner of the box art has a side view repeat of this scheme again. It says that the kit contains 2 realistic figures and the trailer.

The trailer is not illustrated with the tank.

This is followed by a paragraph in Japanese. That I suspect is the history of the tank, followed by 2 color illustrations of figures. One is a crewman.
Both wear khaki uniforms.

The crewman wears a beret and is standing with one foot atop an ammo can.
The other figure is an infantryman. He wears a steel helmet, field gear on his belt, has a canvas back pack and is carrying a rifle. He is pointing with his left arm.

​The other side panel has a color side view of the tank and the flame fuel trailer in the box art scheme (already described above). There is a illustration of the side panels in the tow bar of the trailer extended. This is followed  by another paragraph all in Japanese and a color illustration of the rear of the trailer.
Tamiya's street address in Shizuoka City, Japan is provided. Kit was made in Japan.

The main instructions consists of a single-sheet that accordion-folds out into 8 pages in 7 1/4" x 10 1/4" page format.

Page 1 begins with a black and white photo of the model made up in the box art scheme, over the history of the tank in Japanese. The whole instructions is in Japanese only.

Page 6 & 7 are the painting and marking guides, showing a 4 view of the scheme in winter camouflage and "BANNER" and "BRITAIN" as 3 views and 2 top views.

Page 8 is the parts trees illustrations.

It is the instructions for assembly of the fuel trailer in 5 steps.

There is an illustration of how the flame pipes are arranged inside the Churchill. However, these details are not provided in the kit. There is no interior details at all.

Down the left side of the reverse side of this sheet is a 3-view showing the front and rear of the trailer and a top view of both it and the tank. A black and white photo of the model made up with the two figures is at the bottom of the page. 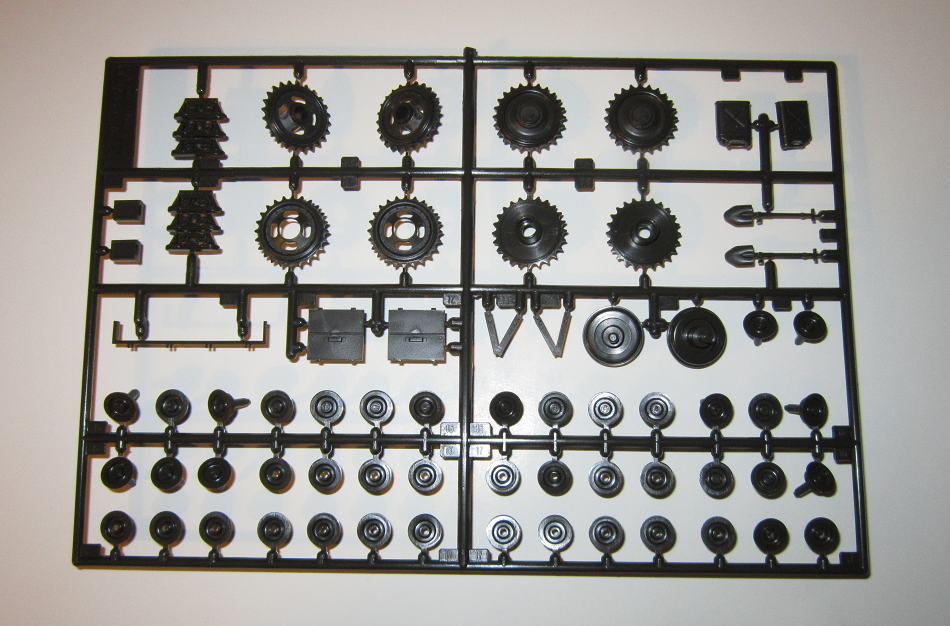 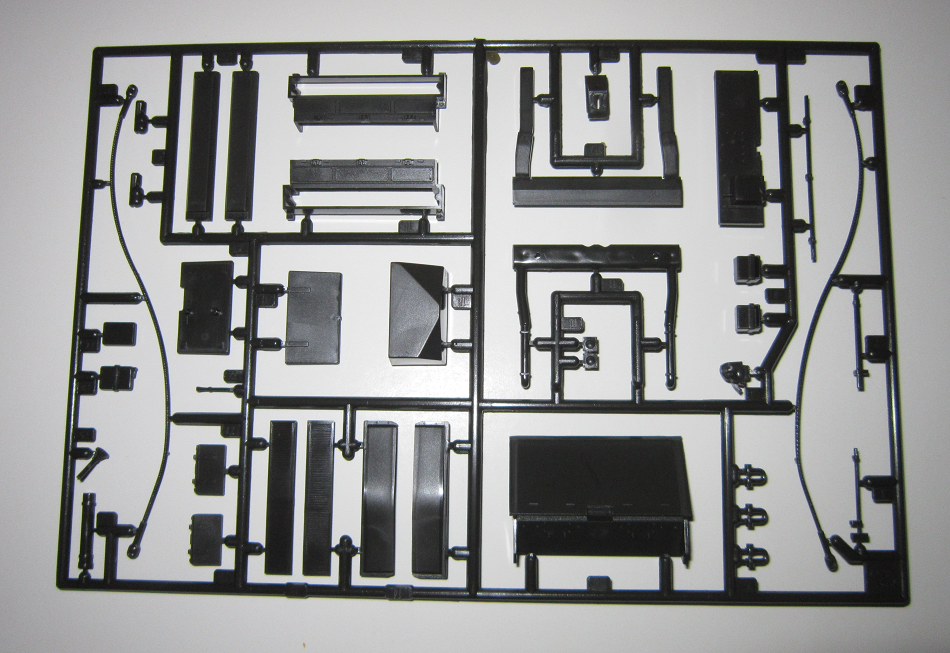 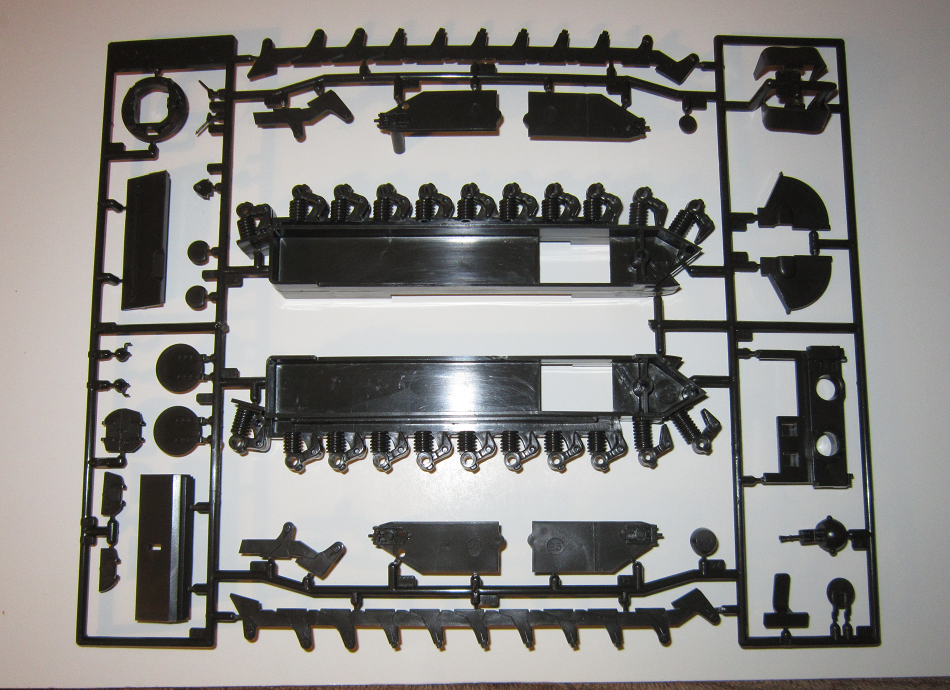 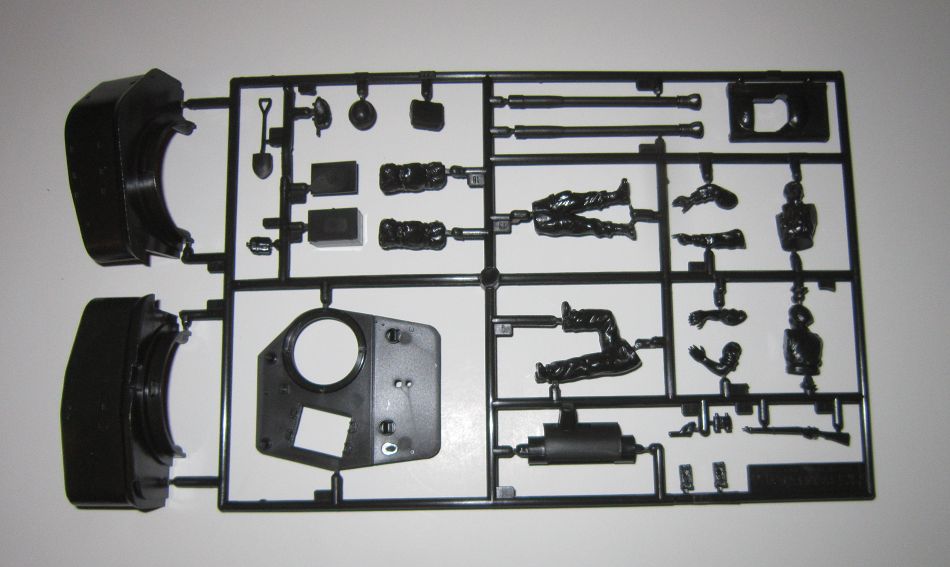 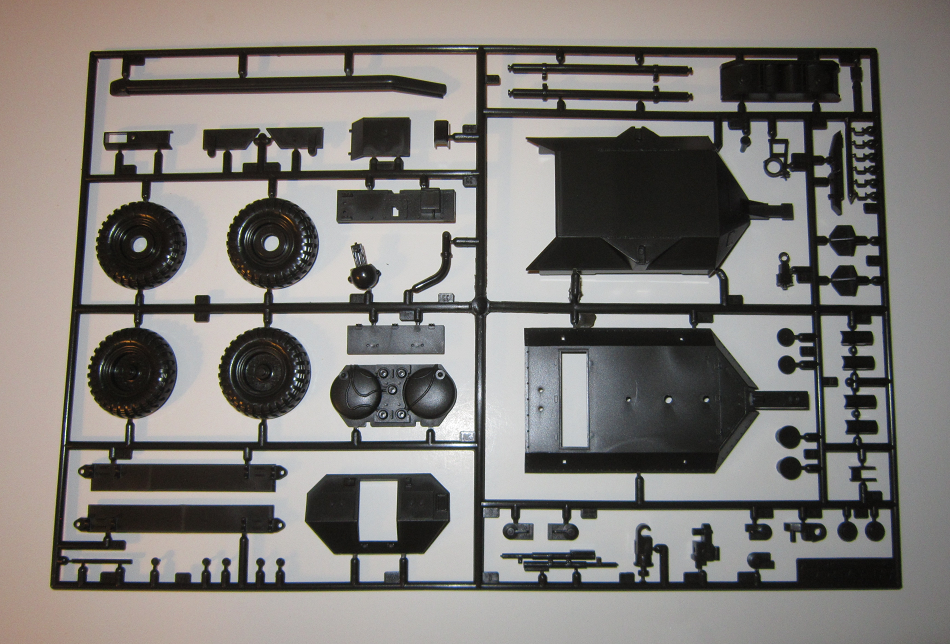 The Dark-green hull tub and top.

Two Dark-green track guards were loose in the box. 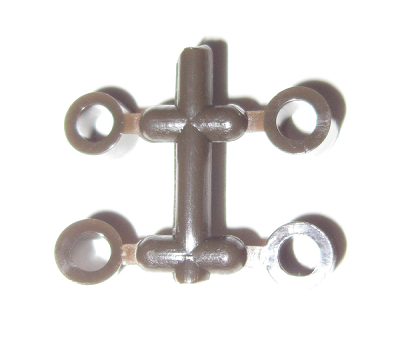 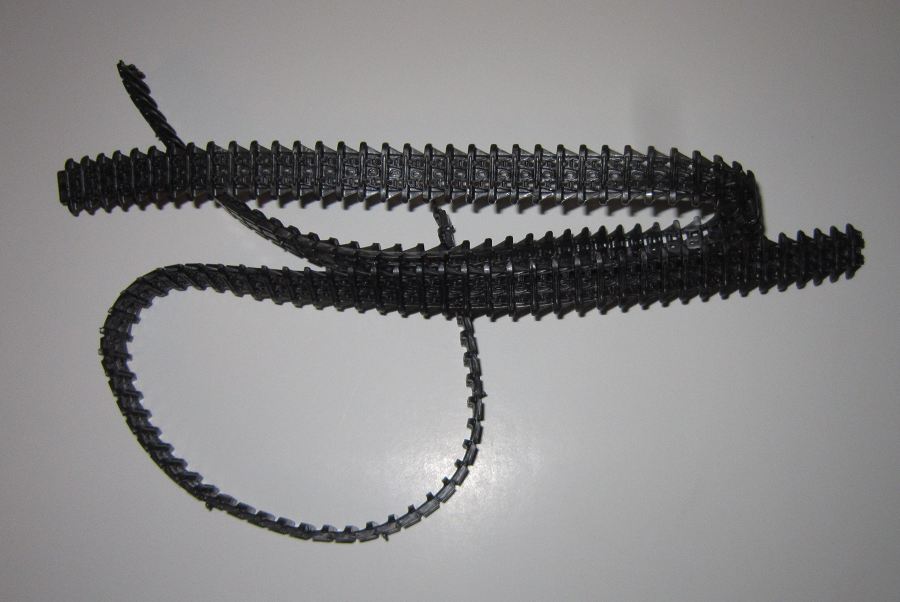 A tube of glue is included in the kit. 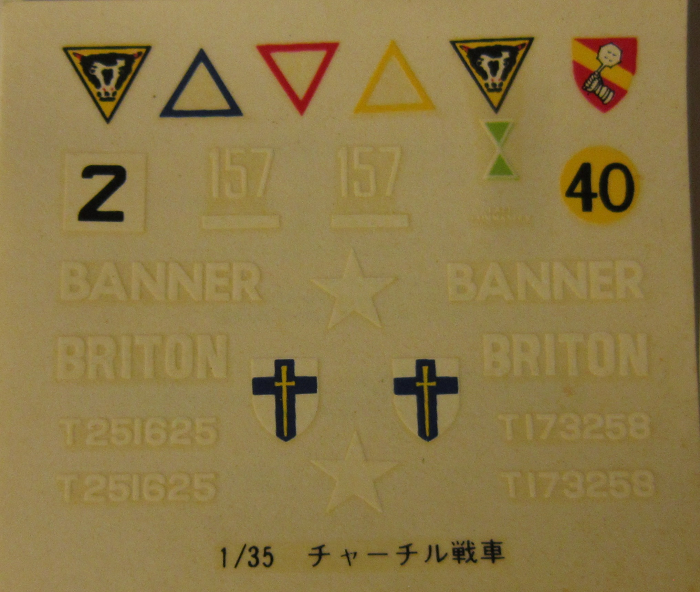