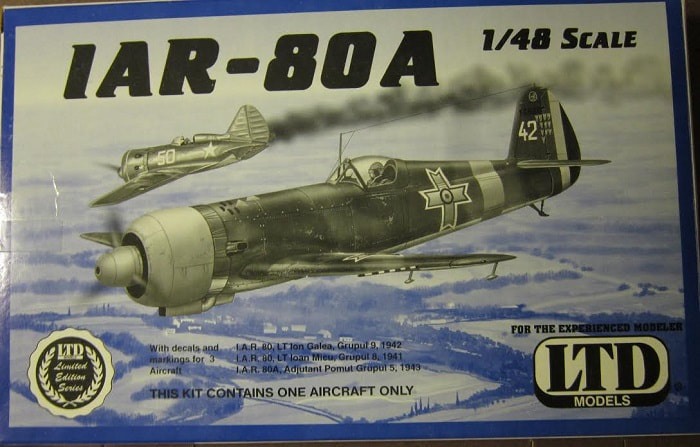 As war clouds darkened the skies over Europe during the 1930's, Rumania, like the rest of Europe, began a quest ot modernize her armed forces, especially the Aeronautica Militara, her air Force.

Industria Aeronautica Romania (IAR), formed in 1925, as a joint Romania/French stock company had primarily been concerned with the license manufacture of foreign designs, comprised mainly of Polish airframes and French engines.

During 1933, the Polish gull-winged PZL P.11 was selected to re-equip the fighter arm with fifty aircraft being ordered from Poland and a further seventy aircraft being built under license by IAR at Brasov.

After the seventy license-built machines were produced, the P.11 was phased out in favor of the P.24, a refined version of the P.11. In 1938, IAR was nationalized and a modern factory of some 600,000 sq. ft. was built, making it one of the largest aircraft manufacturing facilities in the world. In October of 1937, IAR began work on a successor to the P.24.

Under the designations IAR 80, the IAR design team had set about creating a fighter that was as advanced as any known fighter then under development. Proceeding cautiously, the designers utilized as many components of the P.24 as possible. Thus the IAR 80's rear fuselage was a circular semi-moncoque design covered with duralumin stressed skin, as were the vertical and horizontal tail surfaces, which were essentially similar to the P.24.

The flaps, ailerons, rudder and elevators were fabric covered. The fuel tank was housed betweedn the firewall and the cockpit. Wing construction again was heavily influenced by the P.24, being built up of two "I" section spars and 18 duralumin ribs.

The fixed-metal tail skin had a hydro-pneumatic shock asorber. Provisions were made for the installation of four 7.92 mm Browning machine guns mounted in the wings outside of the propeller arc. An open cockpit was provided.

The prototype flew for the first time in April of 1939 with test pilot Captain Dumitri "Put" Popescu at the controls, and IAR officials were elated at the results. Official flight tests recorded an maximum spleed of 317 mph at 13,315 feet with an altitude of 16,000 feet being attained in six minutes. IAR was given orders to proceed with preperations fo serial production.

A number of changes were made to production aircraft. The more powerful 1,000 hp IAR K-14-1000A engine was installed causing an increase in overall length from 26 feet 7.75 inches to 29 feet 2.5 inches. Wing span was increased from 32 feet 9.75 inches to 34 feet 6.25 inches. The single tail plane becoming a cantilever design. A forward sliding blown canopy now covered the open cockpit.

The first production IAR 80's were delivered to the Rumanian Air Force during the Spring of 1940. Top speed of production aircraft with the more powerful IAR K14-1000A was clocked at 319 mph at 13,000 feet and 342 mph at 22,000 feet. Early in the production run, under the designation IAR 80A, armament was increased with the installation of an additional 7.9 mm Browning machine gun in each wing.

After a total of 90 IAR 80A's were built, armament was again revised with the inboard Brownings in each wing being replaced with 13.2 mm guns under the designation IAR 80B.

As the threat to Rumanian oil fields increased during 1943, IAR 80 units were assigned to home defence, where they were particularly effective against the 15th Air Force's B-24's during Operation Tidal Wave, the disasterous attacks on Ploesti. Unfortunately, serviceability of IAR 80 units was low.

By mid 1943, it was decided to halt production of the IAR 80 and assemble the Bf-109 instead. However, after only some 30 machines had been assembled, the Brasov facility was destroyed in attacks by the 15th Air Force during April and May of 1944.

On 23 August 1944, as the Russian steamroller neared, the Romanians switched to the Allied side and on 21 September IAR 80's began operations against German forces. By the time hostilities ceased only Escadrile 83, 64, 65 and 86 were still equipped with the home grown fighter. The IAR 80, however, soldiered on into 1950, when it was replaced by Yak-9's and Lagg-7's.
​
THE KIT:

LTD Models was based in Carrolton, Texas USA. I don't know if they exist anymore?? Their kits were made in the Czech Republic and boxed in the USA.

This kit came in a end-opening type box that is not shrink-wrapped and has its end flap held shut with tape.

The box is also blousy. Being a good 2" too long.

The box art shows a IAR 80A shooting down a Soviet I-16 Rata. The IAR 80A is camouflaged dark green and tan over a light-blue underside. It has a yellow cowling and wing tips under the wings and a yellow fuselage band. It has a white 42 on the rudder sides.

One side panel of the box has a small color repeat of the box art, followed by a one paragraph history of the IAR-80 and LTD Models street address in Texas. Kit is for adult modelers it says and not for children under 14 years.
​The other side panel says that there is a 1/48th scale kit of the PZL P.11C available from LTD and shows its box art in color and a one paragraph of the history of the aircraft.

​The bottom of the box serves as the marking and painting instructions for 3 IAR 80A's. Each illustration is a 2-view. 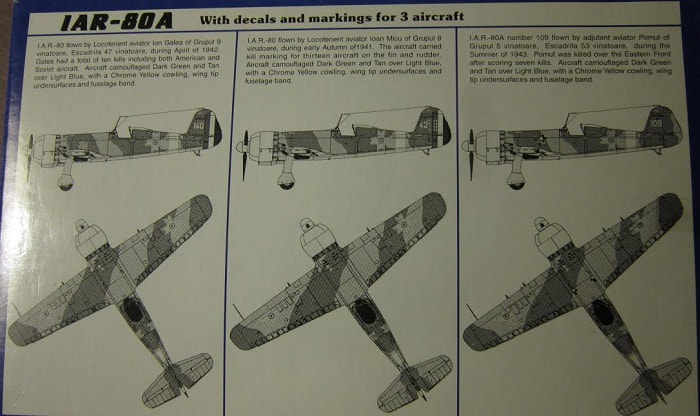 ​1. A IAR-80 flown by Locotenent aviator Lon Galea of Grupul 9 vinatoare, Escadrila 47 vinatoare, during April of 1942. Galea had a total of ten kills including both American and Soviet aircraft. The aircraft is camouflaged dark green and tan over light blue, with a chrome-yellow cowling, wing tip undersurfaces and fuselage band and a white 140 on the side of the rudder. It has a green shamrock logo on the sides of the nose.

2. The box art scheme (already described above). It was flown by Locotenent aviator Loan Micu of Grupul 8 vinatoare, during early Autumn of 1941. The aircraft carried kill markings for thirteen aircraft on the fin and rudder.

3. A IAR 80A number 109, flown by adjutant aviator Pomut of Grupul 5 vinatoare, Escadrila 53 vinatoare, during the Summer of 1943. Pomut was killed over the Eastern Front after scoring seven kills. It is in the same color scheme as the other 2 schemes. It has a logo of Mickey Mouse on the sides of the nose and a white 109 on the sides of the rudder.
​WHAT'S IN THE BOX:

This kit holds 3 trees of light-grey parts, vacuformed canopy in a sealed cello bag. The decal sheet and instructions complete the kits contents.

The instructions consist of a single sheet that accordion-folds out into 6 pages in 9 1/2" x 11" page format.

Page 1 of the instructions begins with explanations about the kit being limited production. next to a black and white photo of the model made up over the history of the aircraft.

Pages 4, 5 and 6 each has a 3-view for painting and markings of 3 IAR-80A's. All three already described above.

Trees in the kit are not alphabetized or numbered or illustrated in the instructions. This is going to cause extra work to get the right parts for assembly. Bad move LTD. 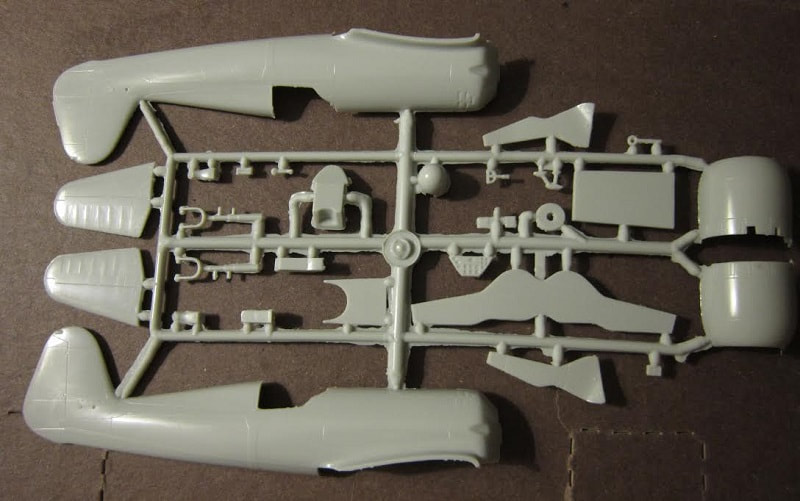 The next large light-grey tree holds: wing upper and lower halves, radio aerial, engine cylinders, propeller (21 parts) One blade on my propeller was broken off during shipment. 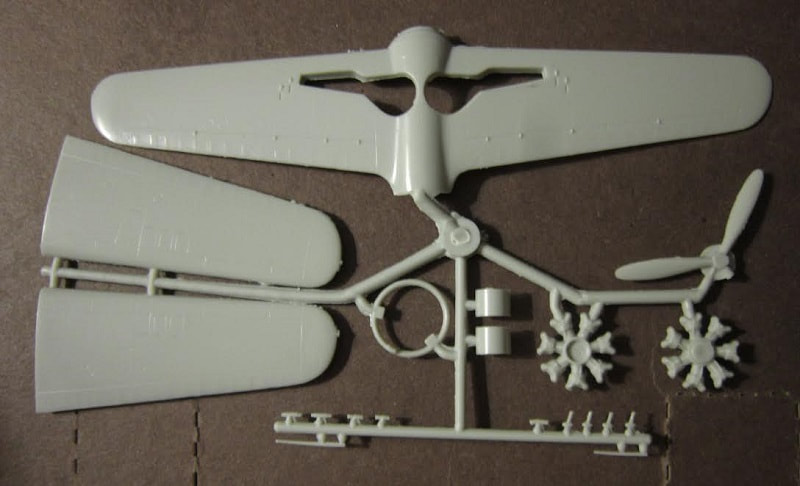 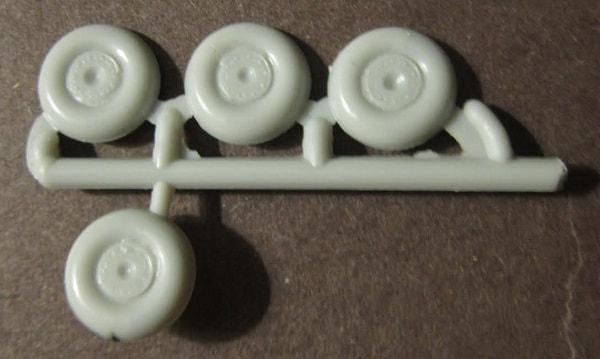 ​The canopy is vacuformed. There are 2 of them provided in case you mess one up. 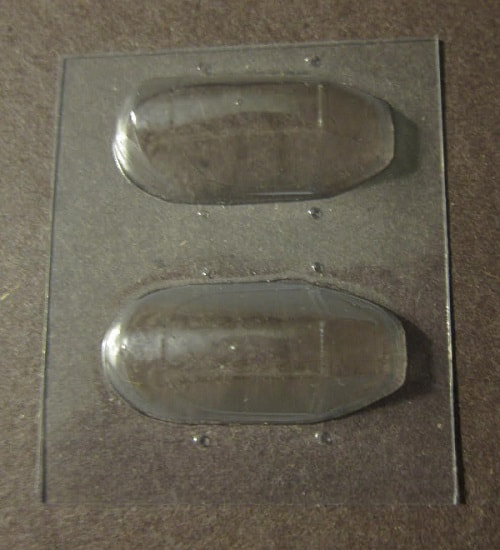 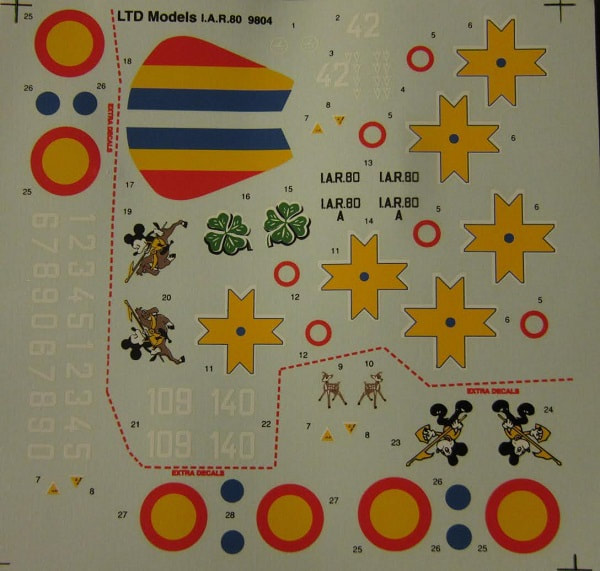 ​I have a set of aircraft cockpit, engine and wheel well plumbing steel PE fret, no. TK4811 by Technics brand company out of Chino, CA. 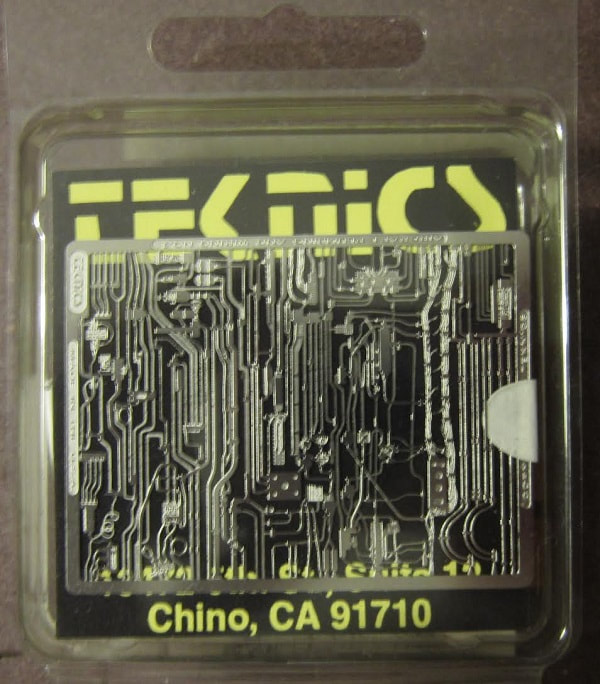 I bought this for $8.00 years ago and I am sorry I did, because this is a total spider-web with the parts so close together and un-distinguishable  really. I don't know haw a modeler would ever separate the parts? I must had a very weak moment to have bought it.