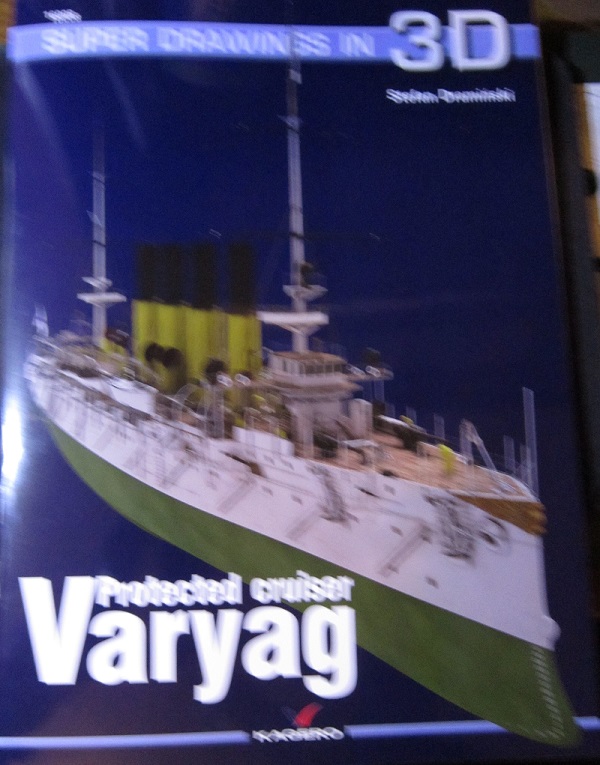 At least five ships in the Imperial Russian and Soviet Navies have been named Varyag after the Varangian people, the Viking ancestors of the Rus.

Russian cruiser Varyag (1899) - A protected cruiser launched in 1899, commissioned into the Imperial Russian Navy in 1901, scuttled in 1904, repaired by the Japanese and relaunched as Japanese cruiser Soya, returned to the Russians in 1916, seized by the British during overhaul in 1917, sold to Germany and run aground in 1920, and sank in 1925. She is most noted for her heroic attack during the Battle of Chemulpo Bay.

The Imperial Admiralty contracted William Cramp and Sons of Philadelphia to build the ship, and her keel was laid in October 1898. Launched on 31 October 1899, under Captain Vladimir Behr, she was commissioned into the Imperial Russian Navy on 2 January 1901.

During her construction, an assistant physician, Leo Alexandroff, left the ship's advance party on 20 April 1899, and applied for U.S. citizenship. He was arrested for desertion. His case reached the United States Supreme Court, which ruled in Tucker v. Alexandroff that the ship, though not accepted for service in the Imperial Russian Navy, was a warship under the terms of the 1832 treaty between Russia and the United States.

During the Battle of Chemulpo Bay at the start of the Russo-Japanese War, Varyag (under the command of Captain of the First Rank Vsevolod Rudnev) accepted a badly unequal battle with the Japanese squadron of Admiral Uriu (one armoured cruiser, five protected cruisers and eight destroyers) in a heroic attempt to break out from Chemulpo (Incheon) harbour 9 February 1904. Chemulpo was in neutral Korean waters. Admiral Uriu gave the Russian ships in harbor a written ultimatum to sail by 12:00 noon or be attacked in the harbor itself. Captain Rudnev sortied, accompanied by the gunboat Koreets; having lost 31 men dead, 191 injured (out of 570) and outgunned, both ships returned to harbor by 1:00 p.m., the crew decided not to surrender, but to sink the ship. The crew was saved by transferring them to the British cruiser Talbot, the French cruiser Pascal, and the Italian cruiser Elba; the captain of the American cruiser Vicksburg declined doing so as a violation of U.S. neutrality.

In 1907, Vsevolod Rudnev (by that time dismissed from Russian naval service in the rank of rear admiral) was decorated with the Japanese Order of the Rising Sun for his heroism in that battle; although he accepted the order, he never wore it in public.

Varyag was later salvaged by the Japanese and repaired. She served with the Imperial Japanese Navy as light cruiser Soya.

For the record of the Soya after salvaging by Japan and prior to her return to Russia, see Japanese cruiser Soya.

During World War I, Russia and Japan were allies and several ships were transferred by the Japanese to the Russians. She was returned to the Imperial Russian Navy at Vladivostok on 5 April 1916 and renamed Varyag. In June, she departed for Murmansk via the Indian Ocean, arriving in November 1916. She was sent toLiverpool in Great Britain for an overhaul by Cammell Laird in February 1917, and was due to re-enter service with the Arctic squadron of the Russian Navy. However, following the Russian October Revolution on 7 November 1917 crewmen who had remained on board hoisted the red flag and refused to set sail. On 8 December 1917 she was seized by a detachment of British soldiers. Assigned to the Royal Navy in February 1918, she ran aground while under tow off of Ireland, but was re-floated and used as a hulk until 1919. She was then sold to a German firm in 1920 for scrap, but ran aground on rocks near the Scottish village of Lendalfoot  in the Firth of Clyde, while being towed to Germany. She was scrapped in place from 1923-1925.

by Japan as prize of war

This book came in a form-fitting self-sealing cello bag.. It is soft cover of 54 pages in 8 ¼” x 11 ¾” page format. It comes with a cardboard set of glasses that has one red lens and one blue lens to use to see the color illustrations in 3 dementions (3D).

The book also contains large loose sheet that is 16” x 23” and folded twice to fit in the book. It has line drawings of the Varyag in 1/350th scale on one side showing it’s 2 sides, top and front and back. The other side has the same views repeated, but in 1/700th scale. There is a huge side drawing of it on this side with no scale given for that one and line drawings of it’s armament (guns) in 1/100th and of it’s boats in 1/200th scale.

A second loose sheet that is printed on slick coated stock is 16” x 11 ½” folded in the center to fit the book. It has color illustrations of the Varyag on one side as she was painted in May 1901. It appears as having a white hull above a red bottom, tan smoke stacks with black top halves and a dark brown wood deck. It flys the early Russian flag that is white with a blue X on it. This is a 2-view showing the top and side.

In the upper right corner it says “This issue of 3D series comes without the usual large size poster that was folded and difficult to frame. As an option a rolled poster can be ordered in 100 x 70 cm or 70 x 50 cm size and it can be printed on paper or canvas. To order the poster of Varyag or any other poster from our 3D series colledction please contact oferta@kagero.pl.”

The other side of this sheet shows the side and top view of the Varyag in the colors it wore during the Battle of Cemulpo Bay. It’s hull now is a odd shade of grey over a rust colored bottom. The smoke stacks are a dark grey with the odd grey for the tops of them. The deck remains the same dark brown. Red circles on the paintings are said to indicate shell hits. There is the large illustration and a smaller 3-view. No scale is mentioned for any of the paintings on this sheet.

Counting the front and back cover of the book there are 79 walk around color illustrations of the Varyag in 1901. This is followed by only 4 illustrations of her as she was painted during the Battle of Cemulpo Bay.

There is a painting of her sitting at rest with her anchor deployed in the 1901 scheme and another painting of her in that scheme sailing along in heavy seas. I think the color illustrations are all computer done. If a person didn't know better you’d swear they were photos of a very well built model.

This is one neat book, being 3D and with the neat foldouts. Very interesting reading and looking at the pictures. Highly recommended.

Zvezda makes a 1/350th scale kit of the ship and it can be found at Hobbylinc in Georgia.
I want to thank the folks at Casemate and Kagero for this review sample.