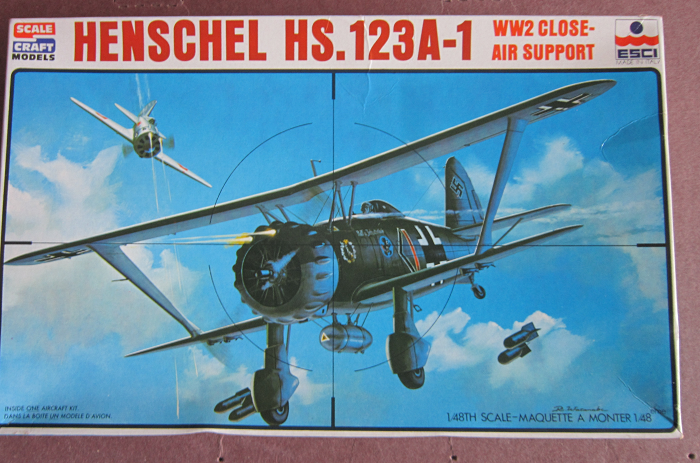 The price sticker is still on the box and I paid a whopping $5.98 for mine back then.
​THE KIT:

Esci was a model company based in Milan, Italy that I believe has gone out of business. Scalecraft was the importer/distributor of Esci in the U.S. back in the 70's. They too may be out of business now. They were located in Nothridge, CA.

The box art shows a Hs-123A-1 flying above the clouds and making a bombing and strafing attack. It is being attacked by a Russian Polikarpov I-16 "Rata" fighter, that is white with a red cowling.

It is black-green above a light-blue undercarriage. The bottom half of the cowling is also light-blue. It has a white infantry assault badge on the sides of the nose, followed by a black Mickey Mouse logo on a blue circle below the cockpit, followed by a black chevron outlined in white and a vertical red bar outlined in white and a large German cross.

One side panel of the box has 3 color box arts of other Scalecraft-Esci 1/48th scale aircraft kits they manufactured and sold: kit no. 4002, a Hs-129, kit no. 4007, a Israeli Kfir C1 and kit no.4003, a British MRCA Tornado, followed by the statement that the kit has a 8 3/4" wing span, decal markings for a Spanish Civil War version and 2 German units,
detailed 9 cylinder BMW 132 radial engine, fully equipped cockpit interior, four 110 lb. bombs and center-line drop-tank included.

This is over the caption about the cover art that says "Leutnant Josef Menapace, Adjutant of the newly-formed Schlechtgeshwader 3 (Battle Wing), pressing his close-support attack over front lines, Russia, early 1944.

The other side panel repeats the 3 color box arts, followed by Scalecraft and Esci's street addresses. Model is intended for modelers 10 years to adult. Cement and paint are not included.
​WHAT'S IN THE BOX:

This kit contains 3 medium-gray trees, a clear windshield in a sealed clear cello bag, the decal sheet and instructions.

The instructions consist of a single-sheet that accordion-folds out into 8 pages in 8 1/2" x 11" page format.

Page 1 begins with a very grainy black and white photo of four Hs-123's parked on a grassy field with crewmen around them. It is impossible to make out any marks on them, other than the German cross and swastika.
This is over the history of the aircraft in Italian and German.

Page 2 continues the history in Spanish, English and French.

Page 7 has a 3-view of a Hs-123A-1 with Gruppo 24 "Legion Condor", Spanish Civil War. It is in a splinter pattern of green, dark-brown and light-gray over a light-blue undercarriage. The fuselage code is black 24 black roundel black 4 with a white rudder flap with a black X on it.

Bottom of the page has a 2-view of a Hs-123A-1 with the 11th Squadron 9. It is black-green over a light-blue undercarriage, has a yellow fuselage band and fuselage code black K outlined in white + horizontal red bar outlined in white.

There is a black and white photo of a mechanic working on the engine of a real Hs-123.

Page 8 has a 2-view of  Hs-123 t the top of the page showing the box art scheme. It further shows the white words HOLLY ZAHRADMICK  above the logo of Mickey Mouse.

The bottom of the page has international assembly symbol explanations down the left side and specifications of the Hs-123 in multiple languages, including English down the right side of the page.

The trees are alphabetized, but not illustrated in the instructions. They do however, have part number tabs next to the parts on the trees. 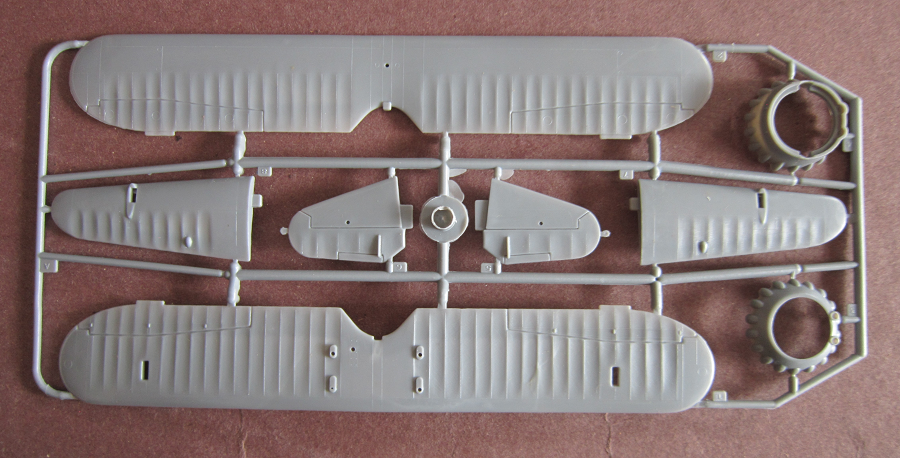 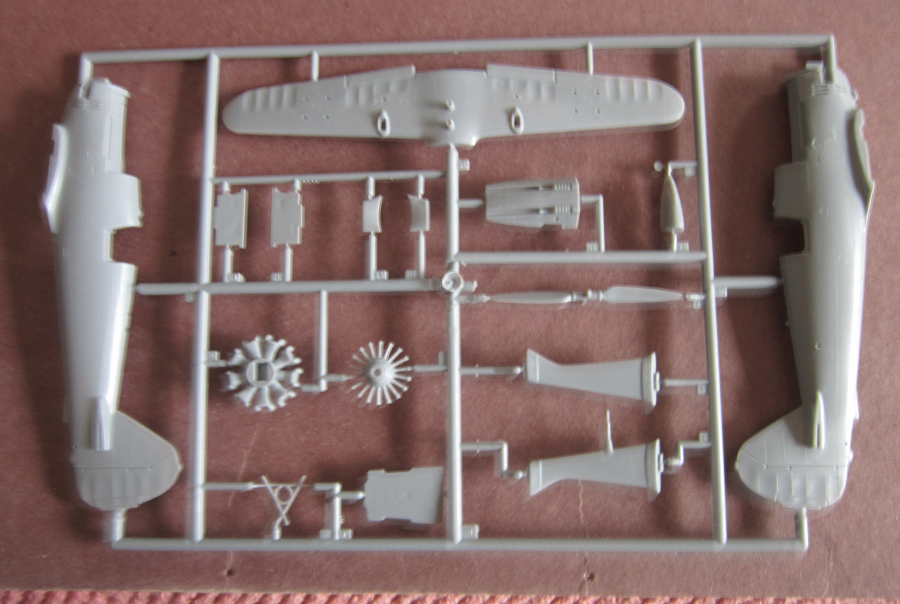 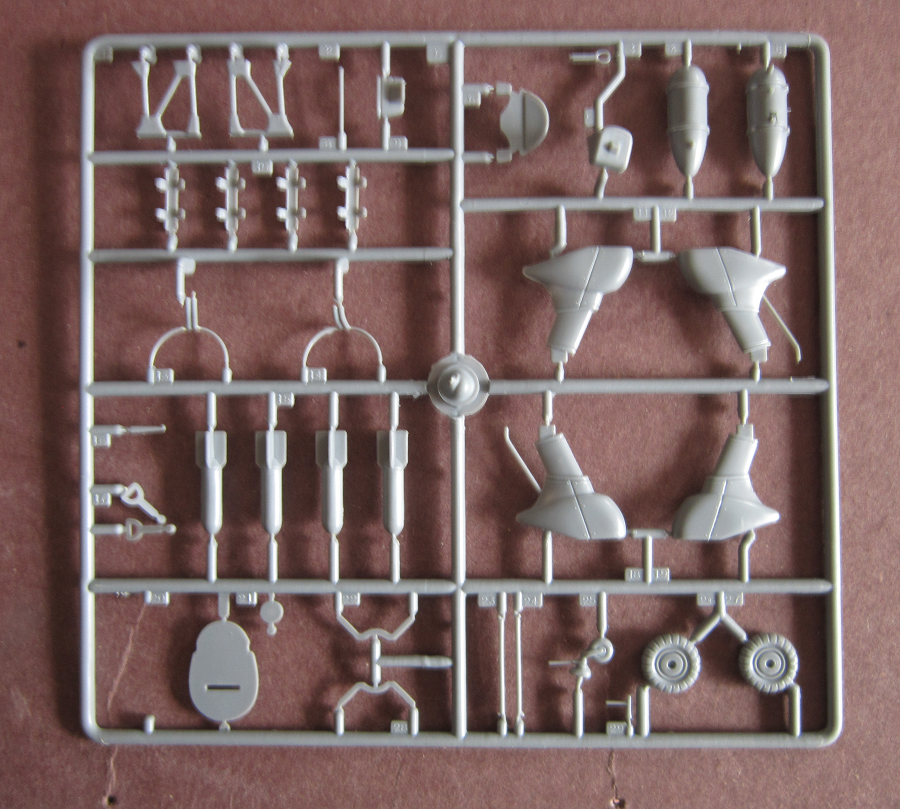 ​The clear part is the windshield (1 part) 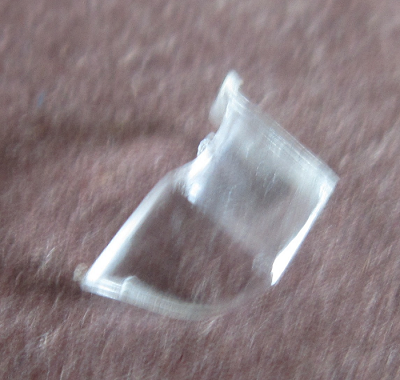 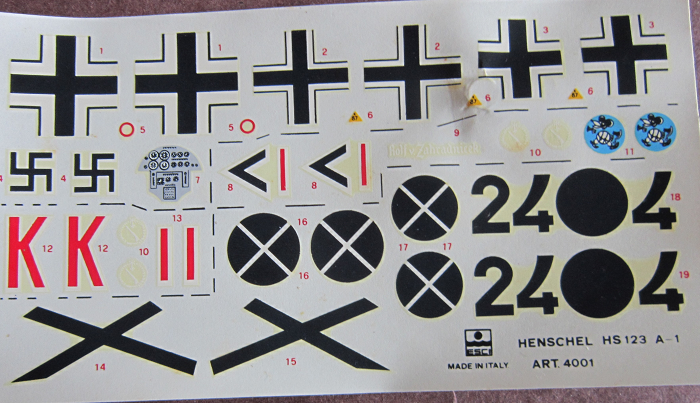