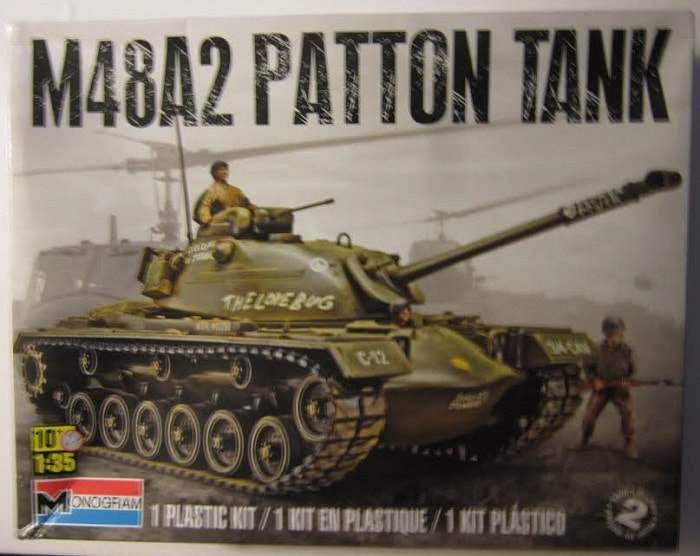 The M48 Patton is a main battle tank (MBT) that was designed in the United States. It was the third tank to be officially named after General George S. Patton, commander of the U.S. Third Army during World War II and one of the earliest American advocates for the use of tanks in battle. It was a further development of the M47 Patton tank. The M48 Patton was in U.S. service until replaced by the M60 and served as the U.S. Army and Marine Corps's primary battle tank in South Vietnam during the Vietnam War. It was widely used by U.S. Cold War allies, especially other NATO countries.

The M48 Patton tank was designed to replace the previous M47 Pattons and M4 Shermans. Although largely resembling the M47, the M48 was a completely new design. It was the last U.S. tank to mount the 90 mm tank gun, with the last model, the M48A5, being upgraded to carry the new standard weapon of the M60, the 105mm gun. Some M48A5 models served well into the 1980s with American forces, and many M48s remain in service in other countries. The Turkish Army has the largest number of modernized M48 MBTs, with more than 1,400 in its inventory. Of these, around 1,000 have been phased out, placed in storage, or modified as ARVs.

T he M48A2 had a Improved powerpack and transmission, redesigned rear plate, and improved turret control.

Monogram and Revell are prolific model companies based in Elk Grove Village, IL. They manufacture all manner of model subjects in the popular scales.

The box art shows a Patton with 3 dimly illustrated helicopters behind it and an infantryman standing in front of it holding a rifle with a bayonet attached.

The tank commander is looking out of the cupola upper hatch.

One corner of the box art denotes that the kit is for modelers of 10 years and older and the skill level of the kit is a 2.

One side panel has a color photo of the model made up in the box art scheme showing further a white "Short!" on the side of the turret and the six infantrymen beside it. This is followed by a paint listing in 3 languages, including English, MADE IN CHINA and a small profile of the Patton made up in Israeli Army scheme.

​Below this is the copyright date of 2011 and Revell's address in Elk Grove Village, IL. Revell is an associate of Monogram.

The other side panel lists features of the kit in the 3 languages: 152 parts, molded in olive-drab, water slide decals, decals have alternate markings, soft black treads. This is followed by another color photo of the model made up.

​The bottom of the tray has an explanation of the skill levels and Revell's office address in Germany. 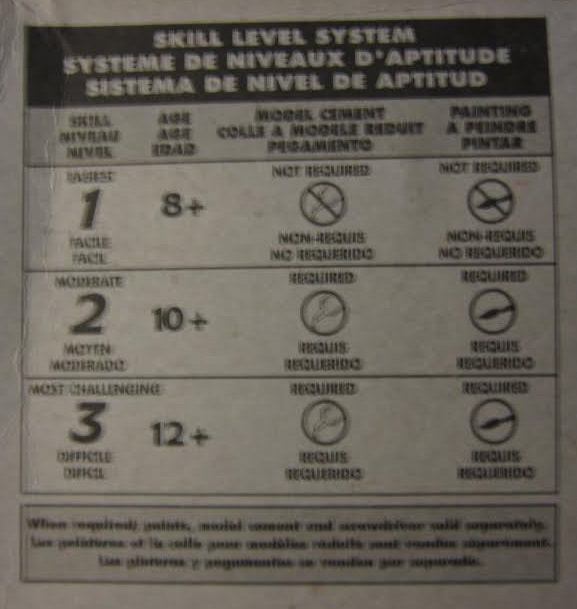 The decal sheet has a tissue on it's face to protect it. However, it was floating around in the box and not protecting the sheet, so I stapled it on.

The instructions consist of a staple bound booklet of 12 pages in 8 1/2" x 11 1/2" page format.
Page 1 begins with a small black and white repeat of the box art on the left and a 3-view of the Patton on the right that is unmarked.

Below that is a one paragraph history of the tank, "Read before you begin" instructions and customer service information in the 3 languages.

Page 2 begins with a paint guide over decal application instructions and international assembly symbol explanations in the 3 languages.

Page 3 has a listing of the names of all the kit parts in the 3 languages, but no part trees illustrations.

Page 4 through 11 give a grand total of 8 assembly steps,.

Assembly step 8 is for the figures in the kit. They are all full bodied and the infantrymen that are standing all have a seperate base to mount them on. The driver figure is molded just head and shoulders.

Page 12 has two 4-views of painting and marking schemes.

2. A Patton with the Israeli Army that is overall desert-sand. It has a white 2X> on the sides of the turret and a black rectangle with white serial no. 346953-Y high on the turret sides.

The part trees are not alphabetized and there are no part number tabs next to the parts on the trees. Bad move Monogram/Revell. 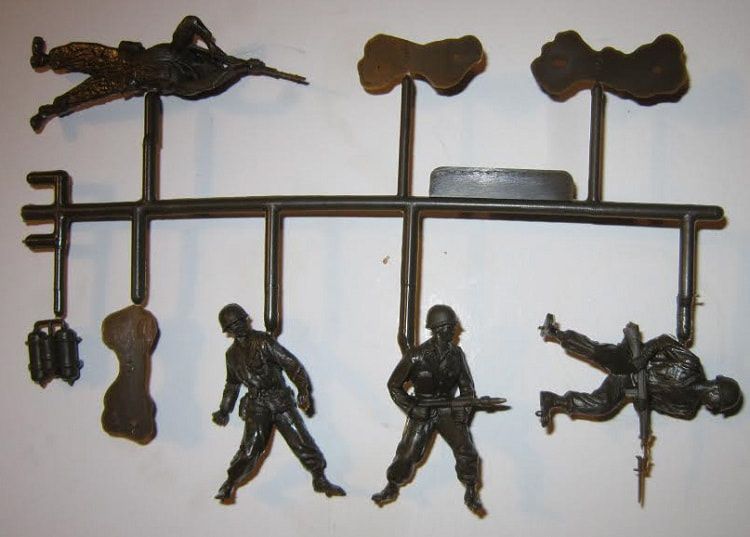 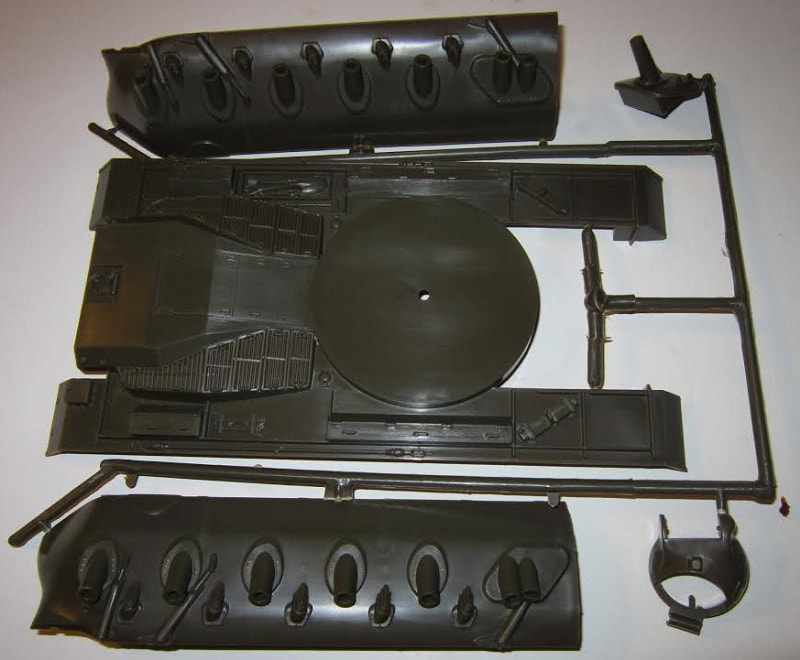 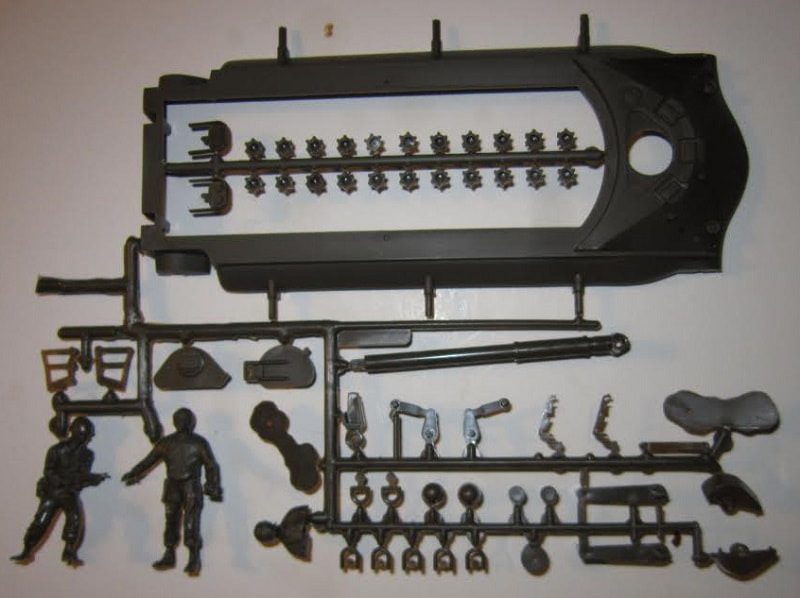 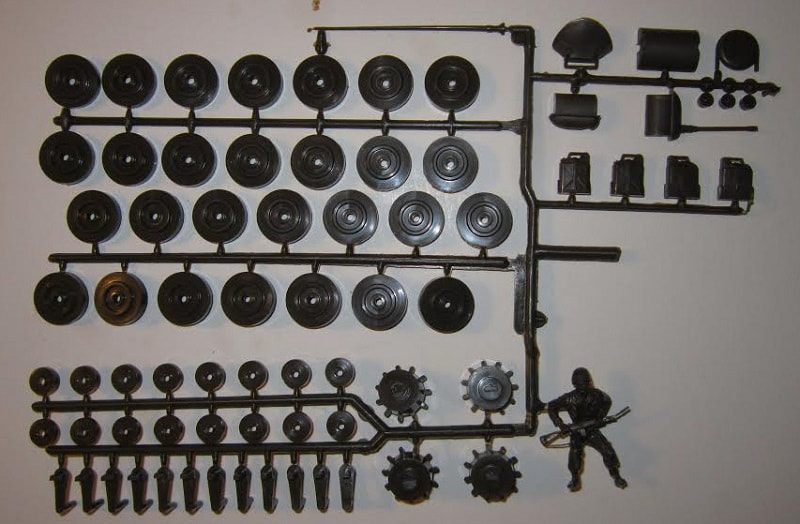 ​The 2 lengths of black vinyl treads are next.

​This is nicely detailed kit externally, but there is no internal details or clear parts.