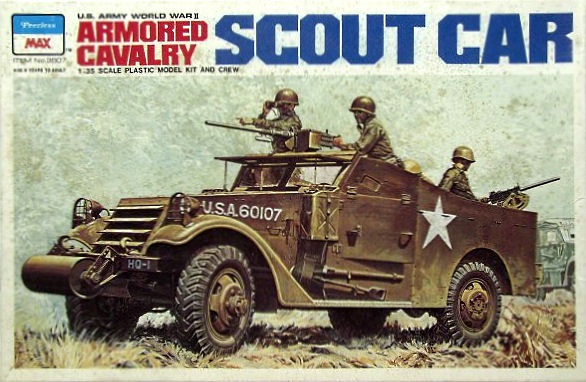 
The M3 Scout Car was an armored car in U.S. service during World War II. It was also known as the White Scout Car, after its manufacturer, the White Motor Company. It was used in various roles including patrol, scouting, command vehicle, ambulance and gun tractor.

The original order was for 64 units, all of which were given to the 7th Cavalry Brigade. Eventually the Army decided to adopt an improved version, designated M3A1. The new version had a longer and wider hull. In front of the bumper an unditching roller was mounted. The M3A1 could carry up to seven infantry and provide fire support with three machine guns - one .50 caliber (12.7 mm) and two .30 caliber (7.62 mm) - mounted on a skate rail around the hull.

The design influenced the later U.S. halftrack designs such as the M3 halftrack and the post-World War II Soviet BTR-40. The early M2 halftrack copied the armor layout as well as the skate rail machine gun

So this kit may be still found on the internet under one of those many brands??

This kit came in a shrink-warpped tray and lid type box. The tray is very sturdy.

The box art shows a M3A1 in overall olive-drab. It is crossing a grassy field It has a white star on the sides of the fighting compartment and a white serial no. U.S.A. 60107 on the sides of the hood. A white HQ-1 is on the right front bumper. Three crew members are shown in the fighting compartment. One is looking through binoculars. The other two are each manning a machine gun. One is on the .50 cal and the other on the 30 cal.

One side panel of the box has 3 color illustrations of M3A1’s. One is in Soviet markings with a white Russian slogan on the side. The second one is a front view with a square plate on the right that the top half of it is black and the bottom half is red. There is a white feather on the black top and a white number 88 on the bottom red. Each end of the bumper is white. I believe this is a British vehicle shown here. The final illustration is a U.S. vehicle with a white star on the engine grill louvers. On the left bumper is a white 3A-15Cav and on the right bumper is a white B12.

The kit contains 4 dark-green trees of parts, a clear parts tree and the decal sheet in 2 stapled-shut cello bags. The decal sheet, instructions and a sheet of the history of the M3A1 complete the kits contents.

The instructions consist of a single sheet that accordion-folds out into 8 pages in 8” x 11 ¼” page format.

Page 1 begins with a black and white photo of 2 of this model made up. One is withoug the canvas top and is in U.S. Army markings. The serial no,. in white U.S.A. 60107 is on the sides of the hood. There is a white star on the hood top and sides of the fighting compartment.

The second model shown is made up in British markings. It is all buttoned up with its armor. It has the white serial no. F34165 on the sides of the hood.

This is followed by Japanese text and 2 black and white actual photos of M3A1’s at the bottom of the page.

Page 2 begins with parts trees illustrations, followed by the individual names of the parts in Japanese only.

Page 3 through 7 give a grand total of 6 assembly steps.

Page 8 has two 3-views for painting and marking schemes. Markings with arrows from each point to the 3-views to where they should go on the truck. There are 3 choices of marks for a U.S. one and 1 each choice for a Canadian Army, a New Zealand Army and a Soviet Army M3A1. Text is all in Japanese here too.

The single sheet that is the history of the M3A1 is folded in the middle to create 4 pages that are also in 8” x 11 ¼” page format. It is in all Japanese and has 11 black and white wartime photos in it of the M3A1 and variants.

A modeler friend of mine Xeroxed his English instructions for this kit and mailed me a copy. However, they are very poor quality and not much good. They are very faded in areas to become unreadable and also edges of the illustrations were off the edges of the copies..groan. 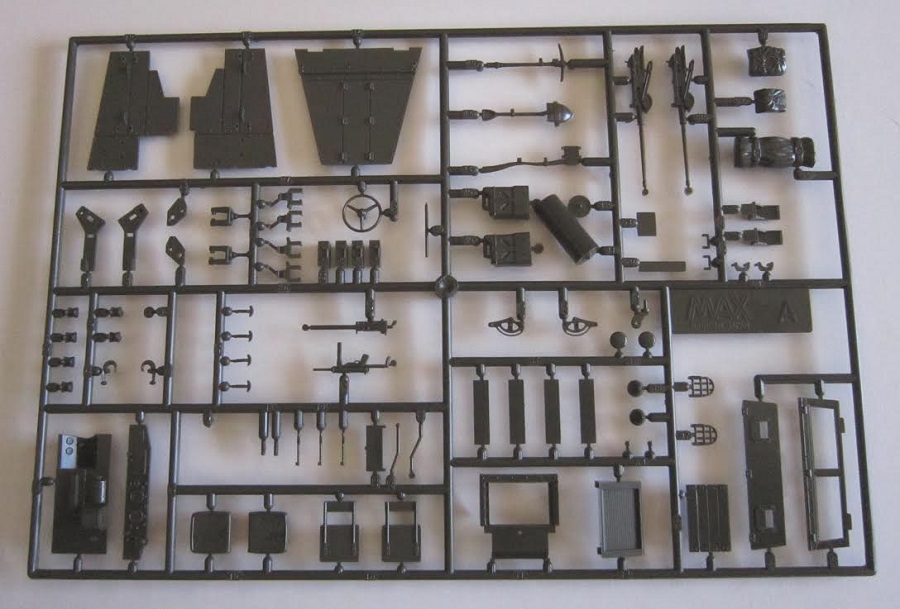 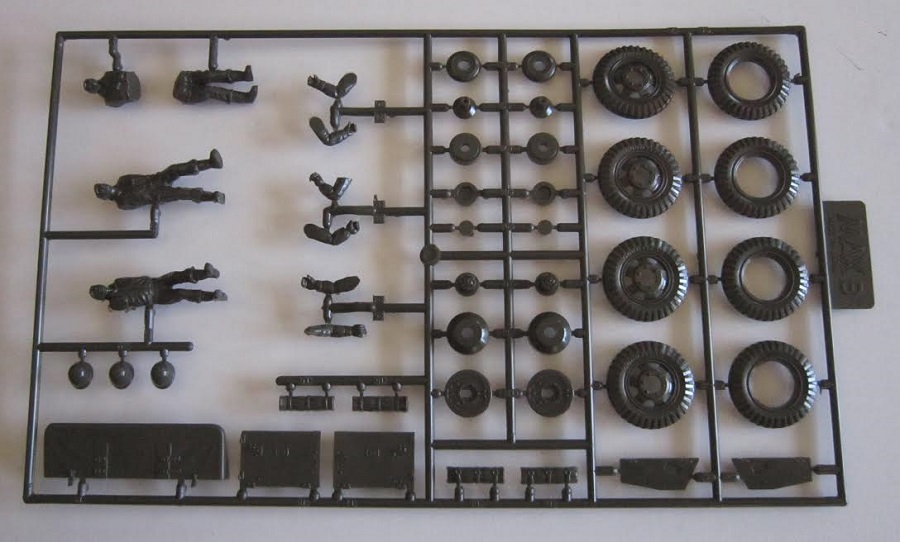 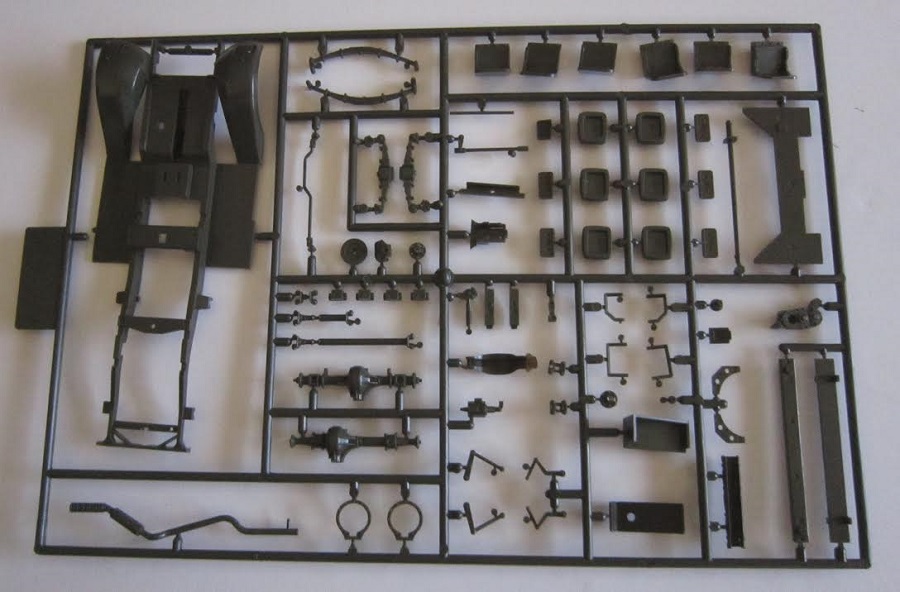 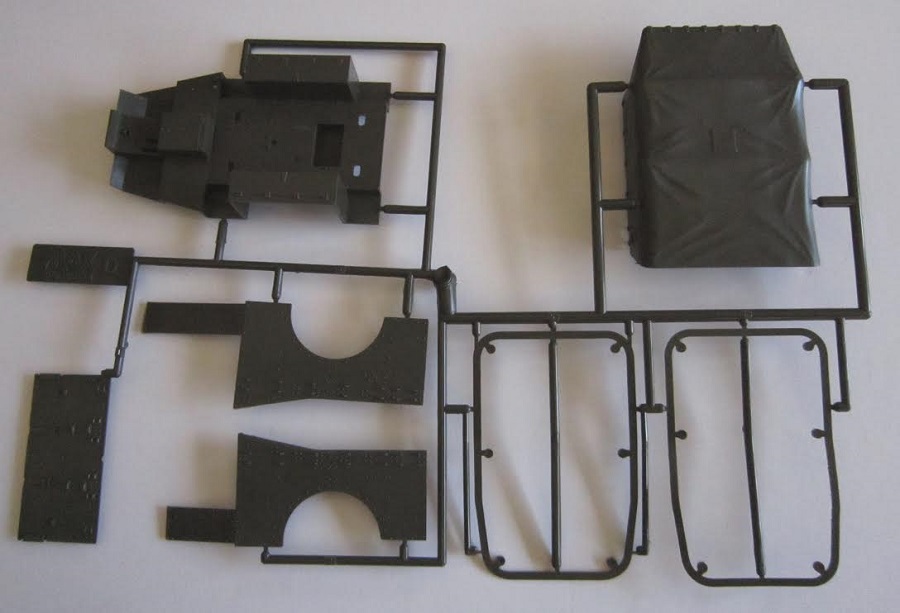 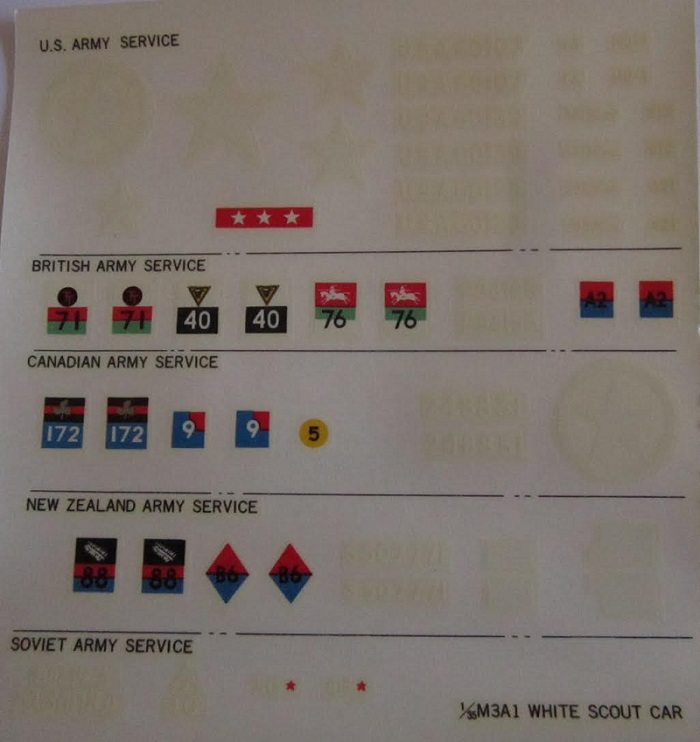 This model will make up into a neat truck. I recommend it to modelers of average building skills.

Kit courtesy of my wallet years ago,