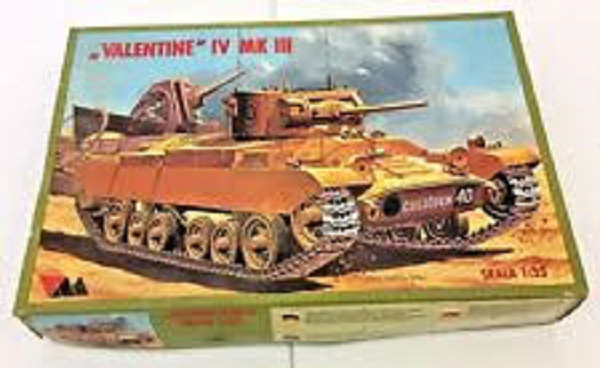 The Tank, Infantry, Mk III, Valentine was an infantry tank produced in the United Kingdom during the Second World War. More than 8,000 of the type were produced in eleven marks, plus various specialised variants, accounting for approximately a quarter of wartime British tank production.

The many variants included riveted and welded construction, petrol and diesel engines and a progressive increase in armament. It was supplied in large numbers to the USSR and built under licence in Canada. Developed by Vickers, it proved to be both strong and reliable.

"Incidentally" Valentine was the middle name of Sir John V. Carden, the man who was responsible for many tank designs including that of the Valentine's predecessors, the A10 and A11.

Another source says that Valentine is an acronym for Vickers-Armstrong Ltd Elswick & (Newcastle-upon) Tyne. The "most prosaic" explanation according to David Fletcher is that it was just an in-house codeword of Vickers with no other significance.

The Valentine started as a proposal based on Vickers' experience with the A9, A10 specification cruiser tanks and the A11 (Infantry Tank Mk I).

As a private design by Vickers-Armstrongs, it did not receive a General Staff "A" designation; it was submitted to the War Office on 10 February 1938. The development team tried to match the lower weight of a cruiser tank, allowing the suspension and transmission parts of the A10 heavy cruiser to be used, with the greater armour of an infantry tank.

Working to a specification for a 60 mm (2.4 in) armour basis[note 2] (the same as the A.11) but with a 2-pounder gun in a two-man turret (the A.11 was armed only with a heavy machine gun), a lower silhouette and as light as possible, resulted in a very compact vehicle with a cramped interior.

Compared to the earlier Infantry Tank Mk II "Matilda", the Valentine had somewhat weaker armour and almost the same top speed. By using components already proven on the A9 and A10, the new design was easier to produce and much less expensive.

The War Office was initially deterred by the size of the turret, since they considered a turret crew of three necessary, to free the vehicle commander from direct involvement in operating the gun.

Concerned by the situation in Europe, it finally approved the design in April 1939 and placed the first order in July for deliveries in May 1940. At the start of the war, Vickers were instructed to give priority to the production of tanks.

The vehicle reached trials in May 1940, which coincided with the loss of much of the army's equipment in France, during Operation Dynamo, the evacuation from Dunkirk.

The trials were successful and the vehicle was rushed into production as "Tank, Infantry, Mark III"; no pilot models were required as much of the mechanics had been proven on the A10 and it entered service from July 1941.

RPM was a model company based in Warsaw, Poland. I believe they have gone out of business.

This kit came in a shrink-wrapped flimsy tray and lid type box. My kit is badly crushed.

The box art shows a Valentine on a dirt field. There is a knocked out German tank behind it who's turret is blown off and is lying on it's side and a lot of smoke.

The valentine is overall light sand color. It has a red circle with a black 10 on it on the sides of the turret.

On the left side of the nose is a red circle with black GO on it. In the center is the white word CULLODEN followed by a black square with a white 40 on it.

One side panel has a small color repeat of the box art, followed by the statement that the model kit is suitable for modelers age 6 to adult, contains decals and instructions for assembly, paint and adhesive are not included, in German, English and Polish. Kit was made in Russia and an address and telephone number in Warsaw are shown.

The other side panel repeats all this again.
​WHAT'S IN THE BOX:

The kit contains 4 medium-gray parts trees, 2 jet-black trees and the decal sheet in 2 sealed clear cello bags and the instructions.

The instructions consist of a single sheet printed on both sides in 8 1/2" x 11" page format. It is printed on light tan low quality newsprint type paper. It is all in Polish.

One side has a black and white repeat of the box art at the top, over the history of the Valentine, decal application instructions and the first 3 assembly steps numbered with Roman numerals.

The reverse side gives a balance of a total of 8 assembly steps.

Trees are not alphabetized or illustrated on the instructions. They do have part number tabs next to the parts on them though. 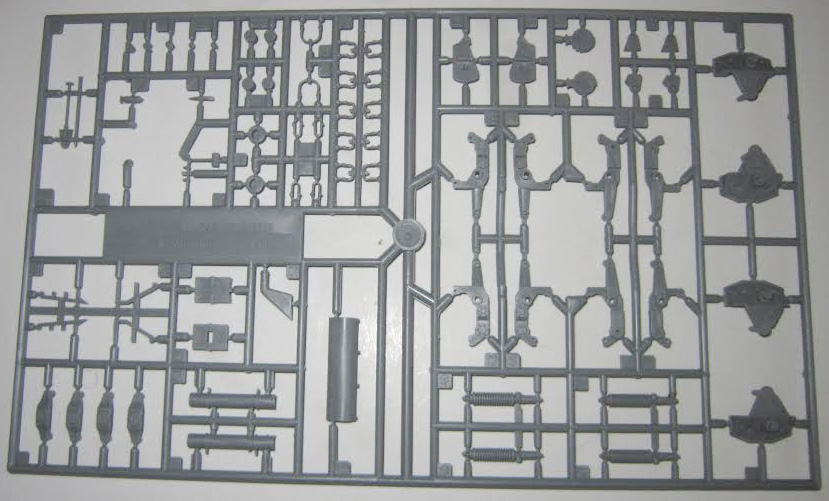 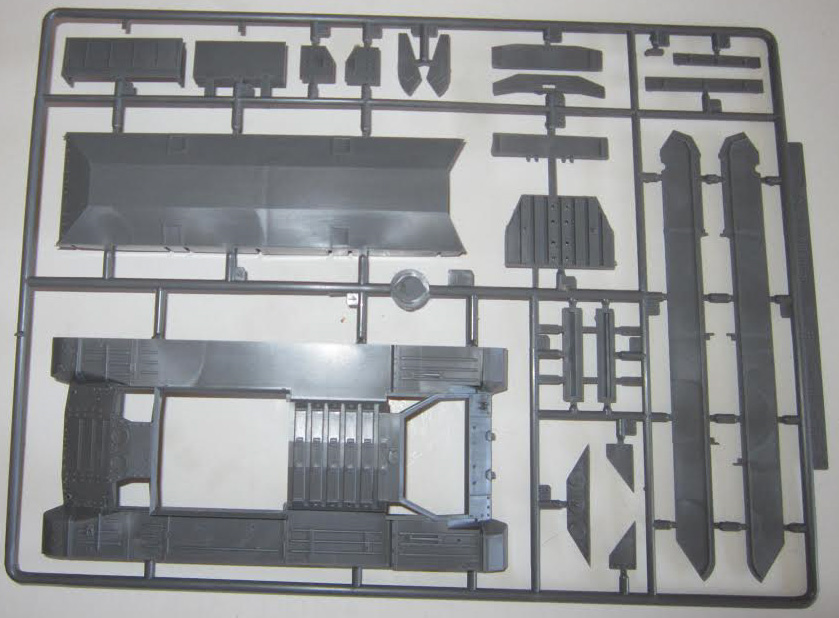 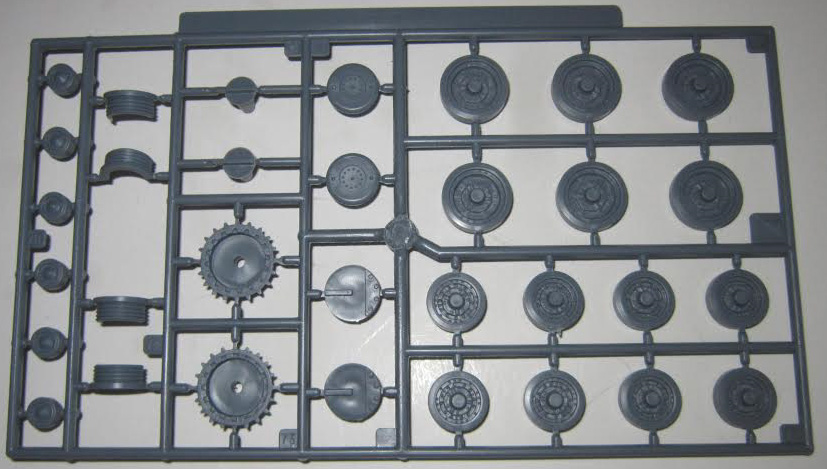 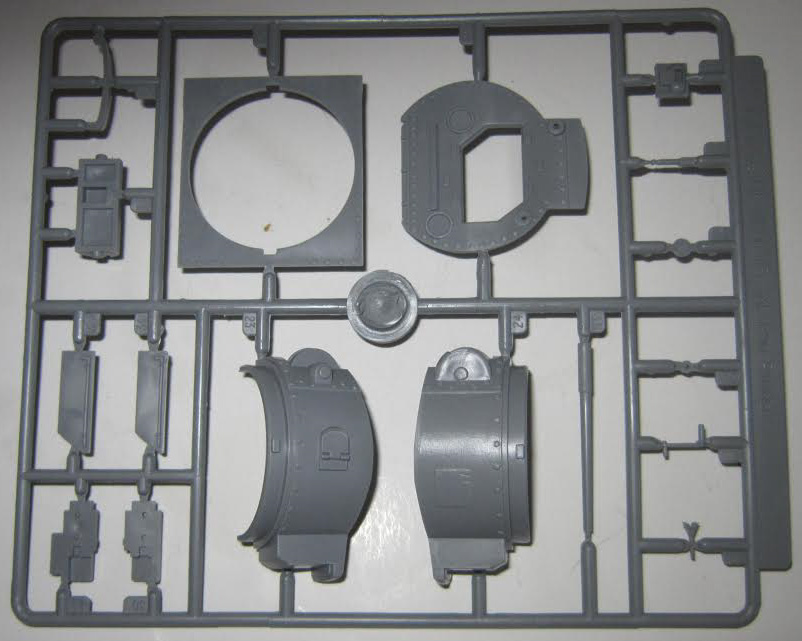 ​There are 2 identical large jet-black parts trees. They hold the individual track links (120 parts per tree) 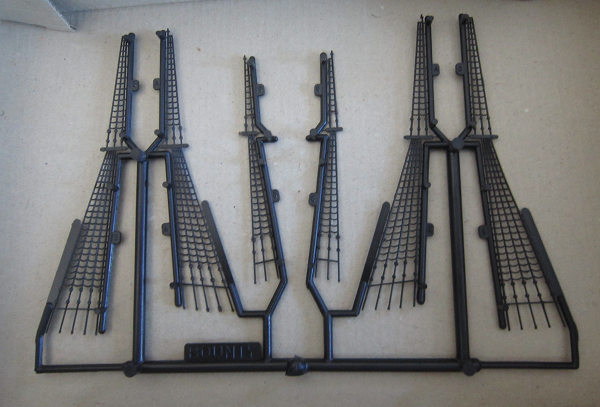 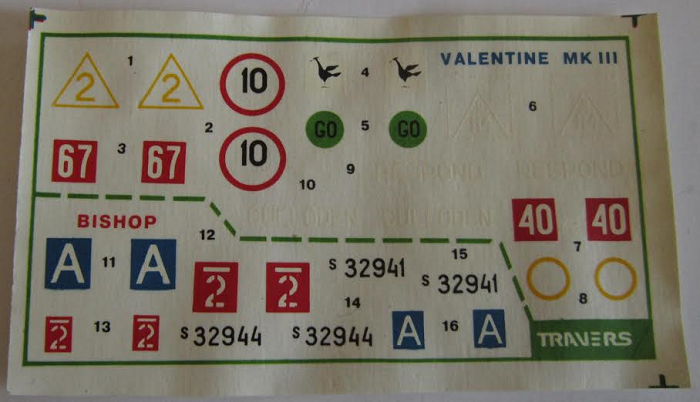