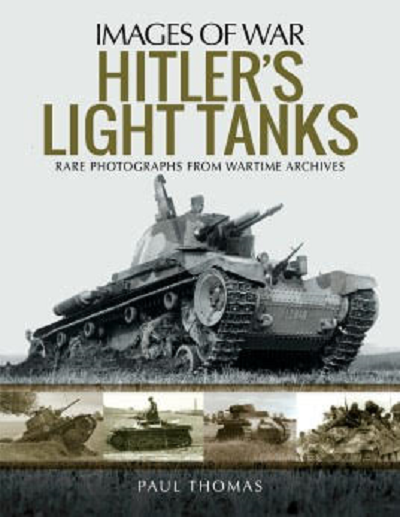 Hitler’s Wehrmacht led the way in armored warfare as the successful blitzkriegs in Poland and North West Europe in 1940 so convincingly proved. The contribution of light tanks, such as Panzer I, II and 35(t)’s was critical.

As the war spread to the Balkans, North Africa and the invasion of Russia, German engineers worked tirelessly modifying existing light tanks and developing new models.

The growing Soviet armored threat, in particular, spawned tank destroyers such as the Marder III Panzerjager, Sd.Kfz. 138/I and 139.

In the final stages of the war, light tanks were phased out and the Marder and 38(t) were up-gunned; the Wespe was adapted from the Panzer II chassis.

Paul Thomas is an expert on WW2 fighting vehicles and an avid collector of contemporary images. He lives in Braintree, UK.

This superbly illustrated book gives comprehensive overview of the multitude of vehicles and variants that came into service. With the text and captions providing technical data, the images show this formidable array of fighting vehicles in action across the theaters of war.

The back cover has 3 more black and white photos, posed against a strip of movie film.

On the left is a Lorraine based Marder I. In the center there is a head-on view of a Pz.Kpfw. I and on the right there is a Pz.Kpfw.I Ausf. B.

The book contains 179 black and white photos, an appendix that lists all the variants shown in the book and a few that are not.

This is a neat book about light tank variants and highly recommended.

It will be of great interest to armor modelers and historians alike.

I want to thank Casemate Publishers and the folks at Pen & Sword for this review sample.

All Pen & Sword titles can be viewed on Casemate’s website at:
www.casematepublishers.com