The SC Seahawk was a scout seaplane designed by Curtiss for the U.S. Navy. The existing SO3C Seamew and the Vought OS2U Kingfisher were 1937 designs that, by 1942, needed replacement.

Work began in June 1942, following a U.S. Navy Bureau of Aeronautics request for scout seaplane proposals. Curtiss submitted the Seahawk design on 1 August 1942, with a contract for two prototypes and five service test aircraft awarded on 25 August. A production order for 500 SC-1’s followed in June 1943, prior to the first flight of the prototypes.

While only intended to seat the pilot, a bunk was provided in the aft fuselage for rescue or personnel transfer. Two 0.5 in. (12.7 mm) M2 Browning machine guns were fitted in the wings, and two under wing hard points allowed carriage of 250 lb (113 kg) bombs or, on the right wing, surface-scan radar. The main float, designed to incorporate a bomb bay, suffered substantial leaks when used in that fashion, and was modified to only carry an auxiliary fuel tank.

The first flight of a prototype XSC-1 took place on 16 February 1944 at the Columbus, Ohio Curtiss plant. Flight testing continued through 28 April, when the last of the seven pre-production aircraft took to the air. Nine further prototypes were later built, with a second seat and modified cockpit, designated SC-2; series production of these was not undertaken however.

The first serial production Seahawks were delivered on 22 October 1944, to the USS Guam. All 577 aircraft eventually produced for the U.S. Navy were delivered on conventional landing gear and flown to the appropriate Naval Air Stations, where floats were then fitted for service.

Capable of being fitted with either floats or wheeled landing gear, the Seahawk was arguably America’s best floatplane scout of WWII. However, its protracted development time meant it entered service too late to see significant action in the war. It was not until June 1945, during the pre-invasion bombardment of Borneo, that the Seahawk was involved in military action. By the end of the war, seaplanes were becoming less desirable, with the Seahawk being replaced soon afterwards by helicopters.

The tri-color camouflage and markings on the Seahawks was in accordance with U.S. Navy regulations from 1944, 1945 and later postwar regulations.

The name Seahawk was used once before by Curtiss on their F1C carrier borne biplane of late 1920’s and early 30’s. It was used later by the British Fleet Air Arm for their Hawker Seahawk jet fighter and then on the Sikorsky SH-60/MH-60 helicopter.
​THE KIT:

Antares is a model company based in Prague, Czech Republic. I found an Antares company on the web there, but that company seems to only produce resin kits, with no injection molded plastic kits, like this one listed anyplace. I don’t know it they are one in the same??

Although it is now out of production, Xotic makes a kit of it, kit no. AV2015 and Aviation USK made it as kit no. AV1015. Since both kits are listed as being from the Aviation USK store, I think they both are the same molds.

The kit comes in a shrink-wrapped end-opening type box.

It has the white number 2 on the sides of the cowling, white stars with white bars on the fuselage sides and above the left wing and below the right.

This aircraft is said to have been aboard the U.S.S. Iowa aircraft carrier in 1945.

The back of the box shows 2 color schemes.

The one mentioned above, and the second one shown on wheeled landing gear in the same paint scheme.

It carries the white number 330 on the sides of the cowling, is the only difference. A small illustration of the 4-bladed propeller is also shown with placement of the manufacturer’s logo on the blades.

Decals for these are on the decal sheet. 330 is said to be one of the test aircraft.
​WHAT'S IN THE BOX:

Inside the box is a single sealed cello bag that holds 2 large light gray trees of parts, the small clear parts tree and the decal sheet.

The instructions complete the box’s contents.

Page 1 begins with an actual black and white photo of the SC-1 on floats parked near a wood dock. The pilot is standing on the wing and 3 sailors are standing on the dock. This is followed by the history of the SC-1, in Czech and English.

Page 2 begins with the parts tree illustrations, followed by a paint listing called out with FS (Federal Standard) numbers and the numbers of Agama and Humbrol brand paints, suggested to use to finish the model.

To the right of this are international assembly symbol explanations.

Page 4 also has a black and white photo of aircraft no. 330, with it’s wheeled gear and a photo of a SC-1 on floats and beaching gear wheels. This second one has no markings beyond the stars.

The decal sheet, already described above, is printed by Propagteam.

In addition to what has already been mentioned, the sheet has decals for the black wing walk-ways and propeller warning stripes that go on the front of the main float.

There is also a white number 3 that can be used on the sides of the cowling for another bird off the U.S.S. Iowa.

This is a nice model of this Seaplane.

The panel lines are engraved, but the ailerons, elevators and rudder are all molded solid and would take surgery to re-position them.

The cockpit interior is very spartan, parts are only supplied for the floor, seat, joystick and dashboard.

Modelers suffering from AMS (advanced modeler’s syndrome) will probably want to detail this area out further.

There is no pilot figure included and the canopy is molded solid and shut.

Part trees are not alphabetized, but the part numbers are on the trees. 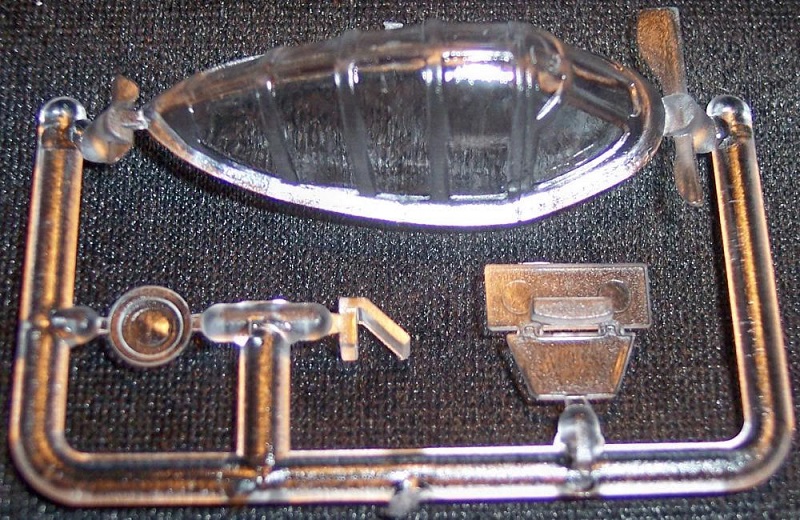 The last item in the box is the decal sheet.

​This looks to be an easy build, easily within the skills of the novice or advanced modeler.
Recommended.
​I bought this kit, in 2000, at Rosemont Hobby Shop in Allentown, PA, while visiting my mother who lived nearby and also competing in the Region 2 IPMS Contest in Wilkes Barre.