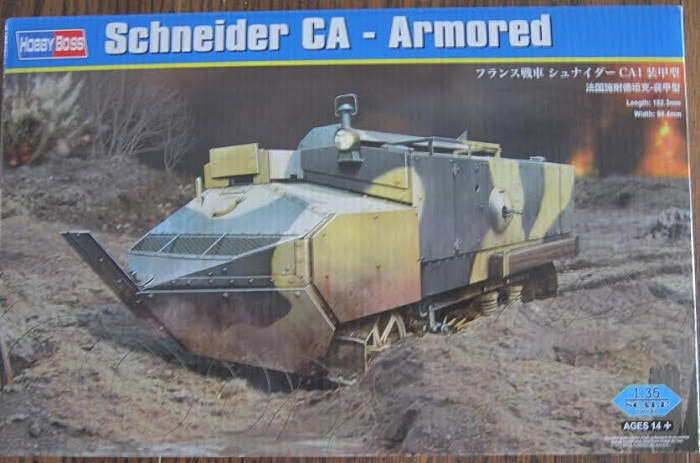 I got my kit in trade with a fellow modeler.
​HISTORY:

The Schneider CA1 (originally named Schneider CA) was the first French tank. The tanks were widely in combat during the last WWI years. Their first action on 15 April 1917 was largely a failure.The tank units suffering heavy losses, but subsequent engagements were more successful.

In 1918 the Schneider tanks played an important role in halting the German Spring Offensive and breaking the German front in the French Summer Offensives. They were active until the end of September 1918, their numbers having droped considerably due to attrition.

After the war the surviving tanks were mostly rebuilt as utility weapons, but six Schneider tanks were deployed by Spain in Morocco, the type seeing first action in the beginning of the Spanish Civil War.

The Schneider was inspired by the need to overcome the stalemate of trench warfare which on the Western Front prevailed during most of the Great War. It was designed specifically to open passages for the infantry through barbed wire and then to suppress German machine gun nests. After a first concept by Jacques Quellennec devised in November 1914, the type was developed from May 1915 onwards by engineer Eugène Brillié, paralleling British development of tanks the same year.

Colonel Jean Baptiste Eugène Estienne in December 1915 began to urge for the formation of French armoured units, leading to an order in February 1916 for four hundred Schneider CA tanks, which were manufactured by SOMUA, a subsidiary of Schneider located in a suburb of Paris, between September 1916 and August 1918.

Like most early tanks, the Schneider was built like a simple armoured box, without compartmentalisation of the inner space. It lacked a turret, with the main armament, a short 75 mm cannon, in a sponson on the right side. By later standards it would therefore have been an assault gun instead of a tank.

The vehicle was considered a very imperfect design, because of a poor layout, insufficient fire-power, a cramped interior and inferior mobility due to an overhanging nose section, which had been designed to crush through the belts of barbed wire but in practice caused the tank to get stuck. Improved designs were almost immediately initiated but the production of these, the Schneider CA 2, CA 3 and CA 4, was eventually cancelled.

Hobby Boss is based in China. They make all manner of model subjects in the popular scales.

The box are shows a Schneider moving through deep mud and barbed-wire. It is in a base of sand-yellow, with wide dark green blotches. No markings are shown. It is hard to tell if this is a painting or a color photo of the model made up on a diorama base ??

One side panel has a color 2-view of a Schneider in a wide wave pattern of earth-yellow, dark-green and red-brown. It has a white square with a red circle on it on the sides of the nose. This is followed by a one-paragraph history of the tank in English and MADE IN CHINA, with a copyright date of 2015.

​The other side panel has a color side view of a Schneider in a wide wave pattern of earth-yellow, dark-green and red-brown, with a panel on the side of the nose in sky-blue. All 4 colors are outlined in black.

​This is followed by the one-paragraph history of the tank again in Chinese, illustrations of the decal sheet and one of the frets of brass PE. Kit is said to be for modelers 14 years and older, but not for children under 3 due to small parts that they may swallow. The main material is PS plastic.
WHAT'S IN THE KIT:

The PE frets have a stiff card between them to prevent bending and the decal sheet has a tissue on its face to prevent scratching.

These items and the hull tub and roof are in a cardboard compartment at one end of the tray.

There are 2 instruction sheets.

Page 1 begins with a black and white repeat of the box art, over PLEASE READ BEFORE OPERATIONS, international assembly symbol explanations and decal application instructions in English and Chinese.

Page 2 has the parts trees illustrations. Part trees are alphabetized and have number tabs next to the parts on them.

Page 3 through 12 give a grand total of 14 assembly steps.

The second instruction sheet is for the color schemes. It is printed on both sides in color on slick-coated paper and is 8 1/2" x 11" format.

Both sides have a 5-view.

The face side is a Schneider in a wide wave pattern of earth-yellow, dark-green, red-brown and sky-blue. Each color is outlined in black. It has the white serial no. 61215 low on the rear end of the sides of the hull. 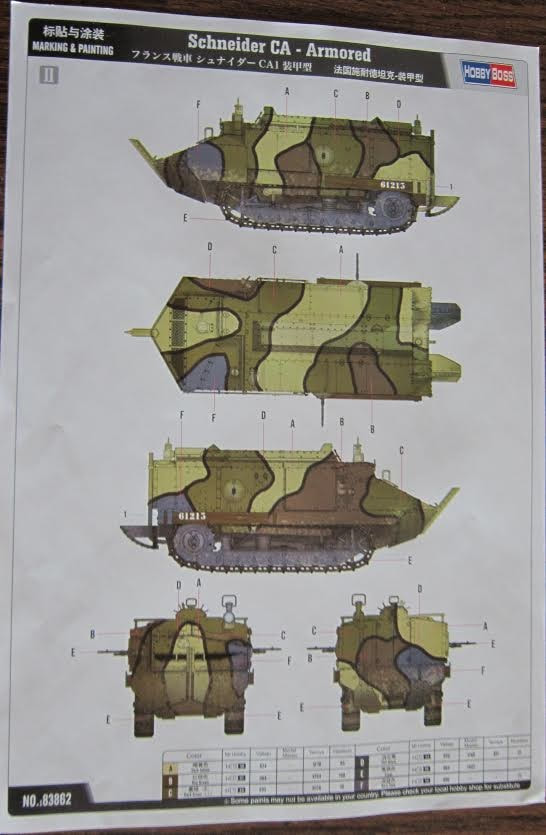 ​Mr. Hobby, Vallejo, Model Master, Tamiya and Humbrol brands of paints are listed as suggestions to use.

The other side has a Schneider in a wide wave pattern of earth-yellow, dark-green and red-brown, with a white square with a red circle on it on the front and sides of it's nose. It has the serial no. 61204 above and below the square insignia. There is a white banner with red FEE KAPUTT on it on the right side of the front of the nose.

The paint listing is again at the bottom of the page. 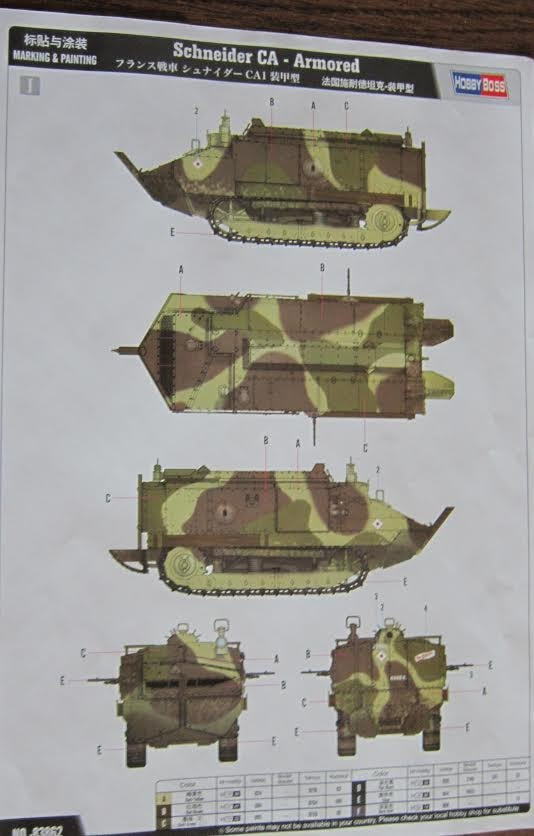 ​One catalog is printed in color on slick-coated paper. It accordion folds out into 8 pages in 8 1/2" x 11" format and is for Master Tools brand of hobby tools. 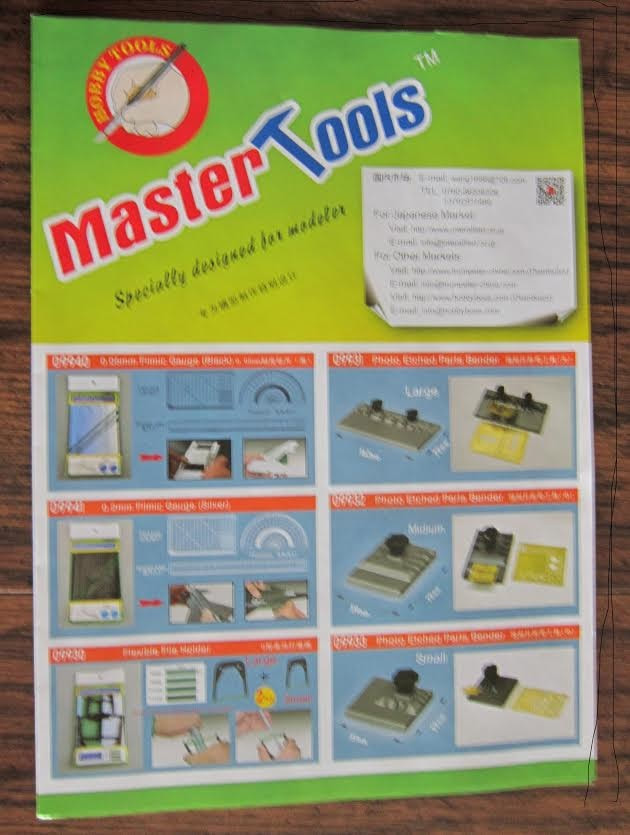 ​The final catalog is a single sheet printed in color on both sides on slick-coated paper, also in 8 1/2" x 11" format. 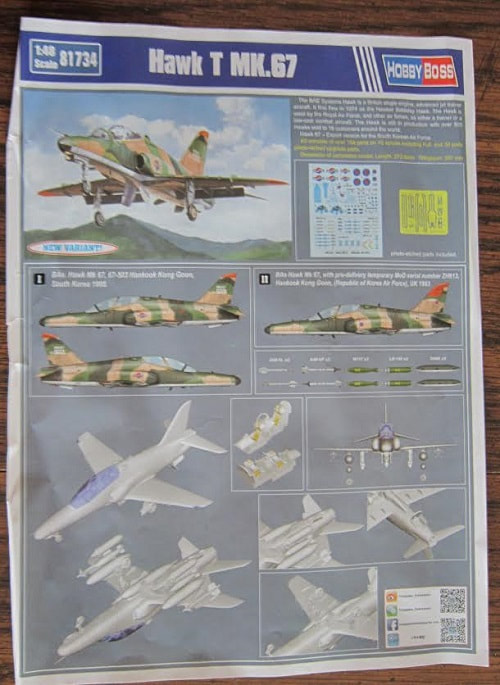 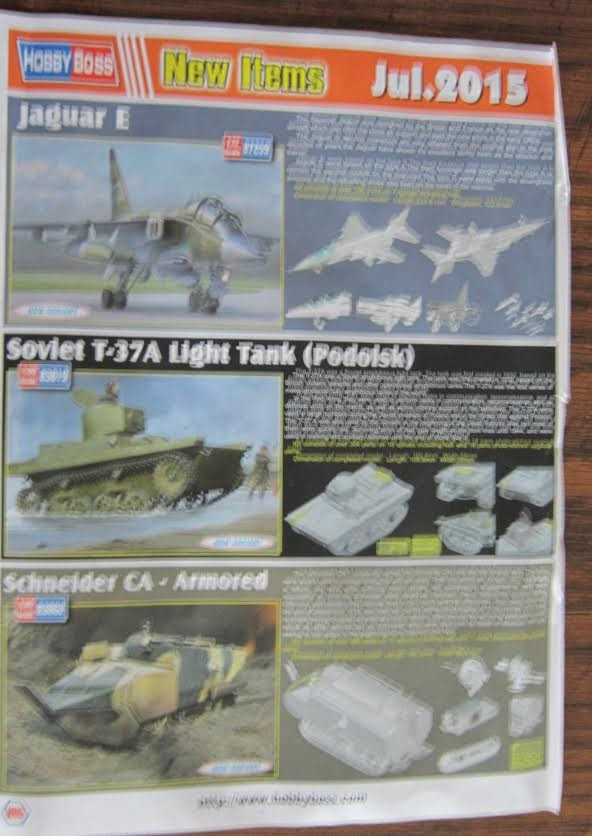 ​I find it rather difficult to name the parts on the trees. So, will only name a few and leave the reader to looks at the pictures of the trees please.
Light-tan letter A tree: holds the trench crossing devices and various hull side panels etc. (26 parts) 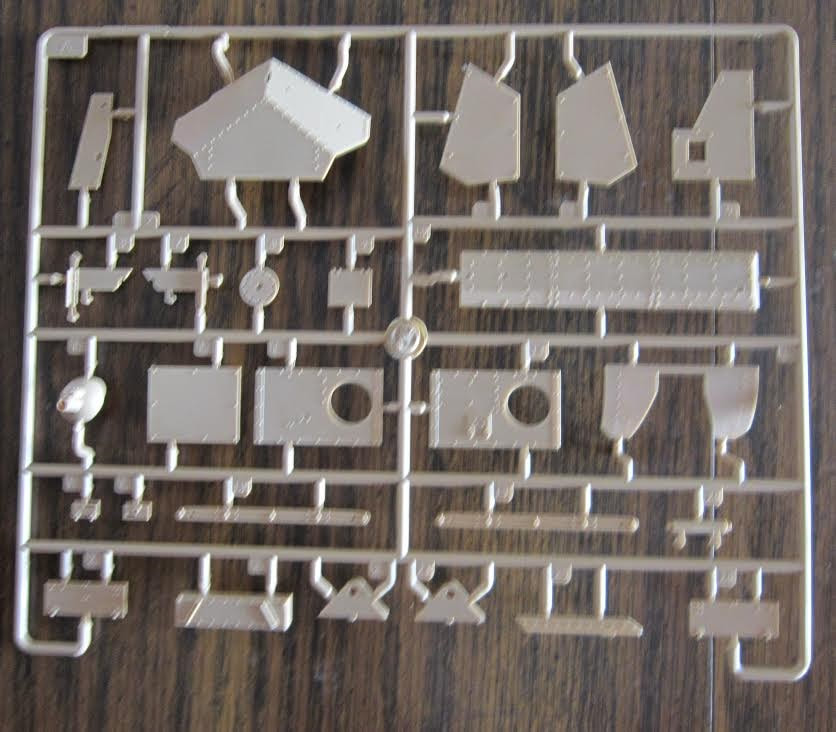 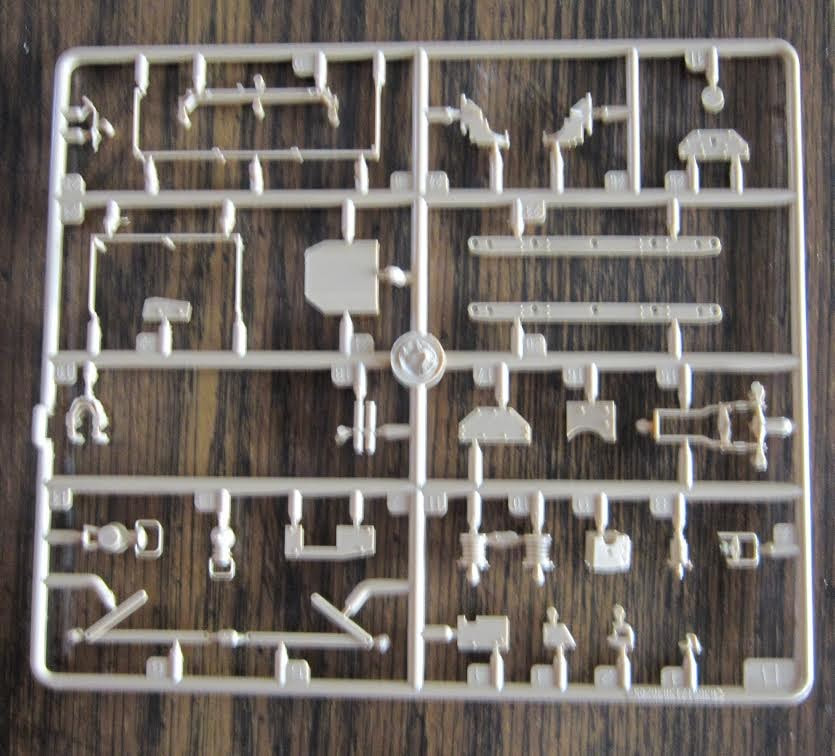 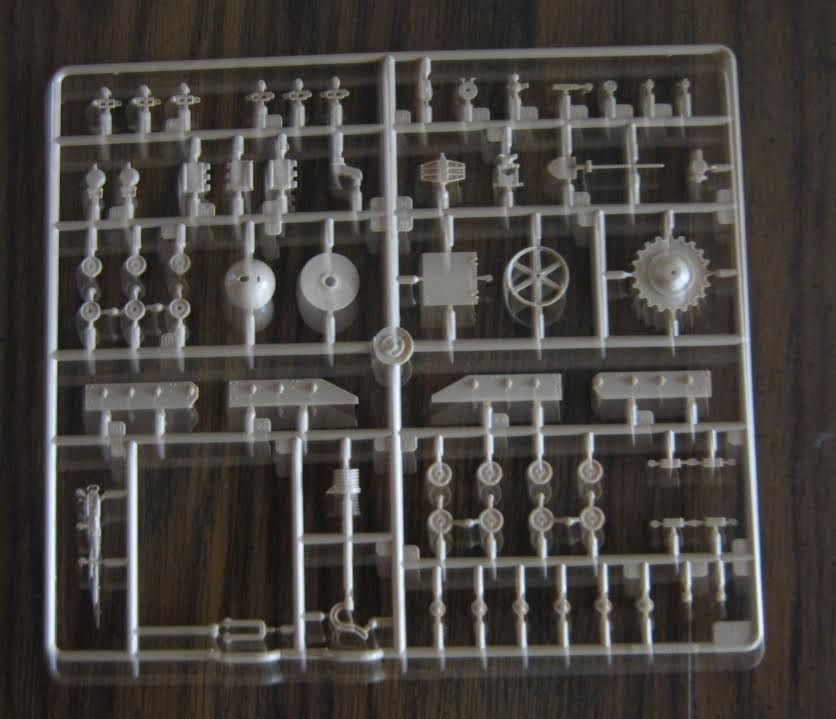 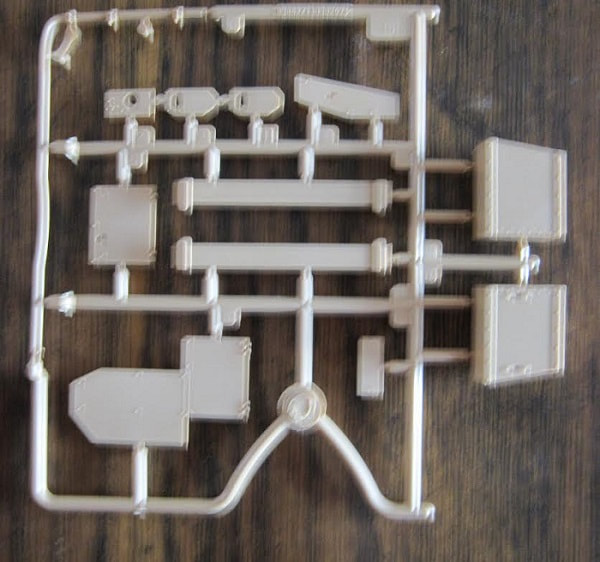 ​There are 4 identical medium-brown letter T trees. These hold the individual track links (48 parts per tree) 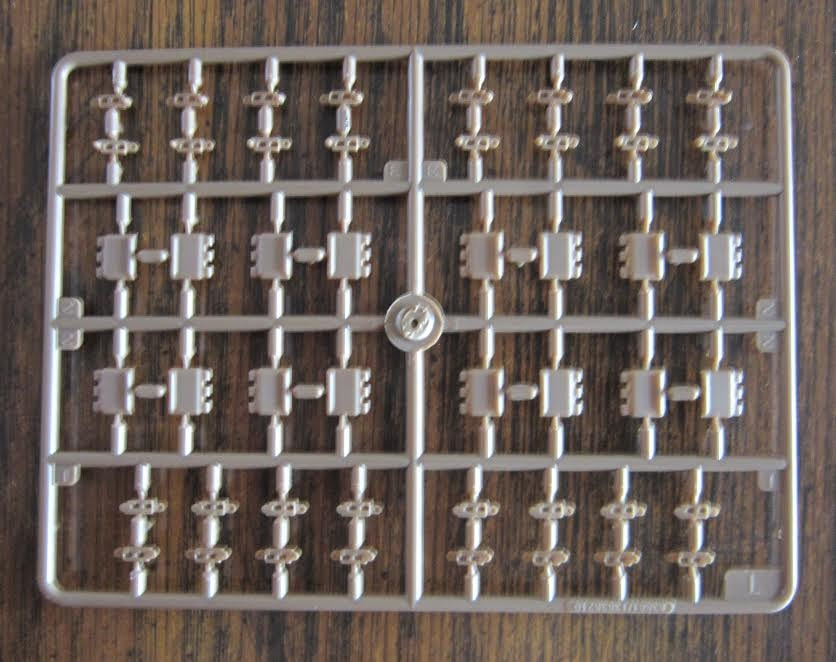 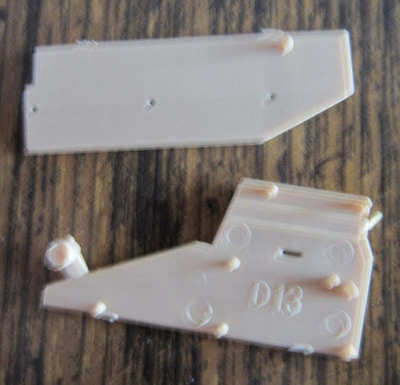 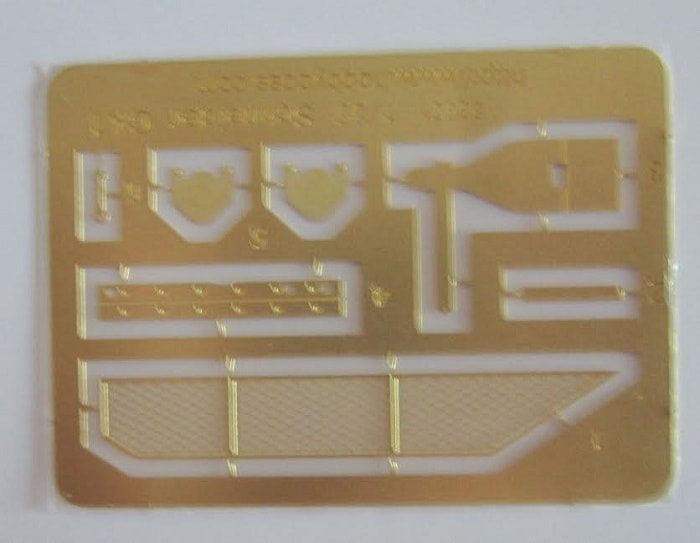 There is a illustration of a British Mk.5 tank ans some soldiers in the center and two biplanes are flying overhead. It says WORLD PEACE at the bottom. Neat extra!! 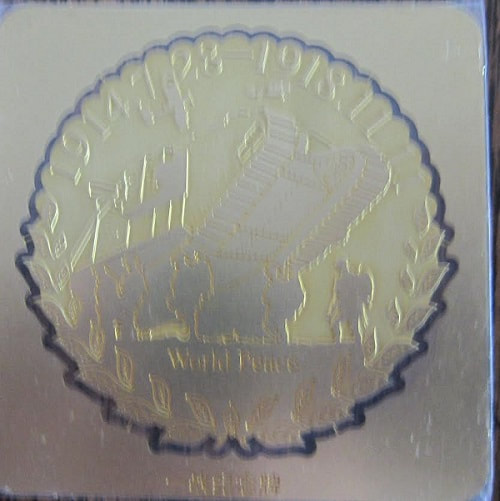 The decal sheet, instructions and catalogs complete the kit's contents. 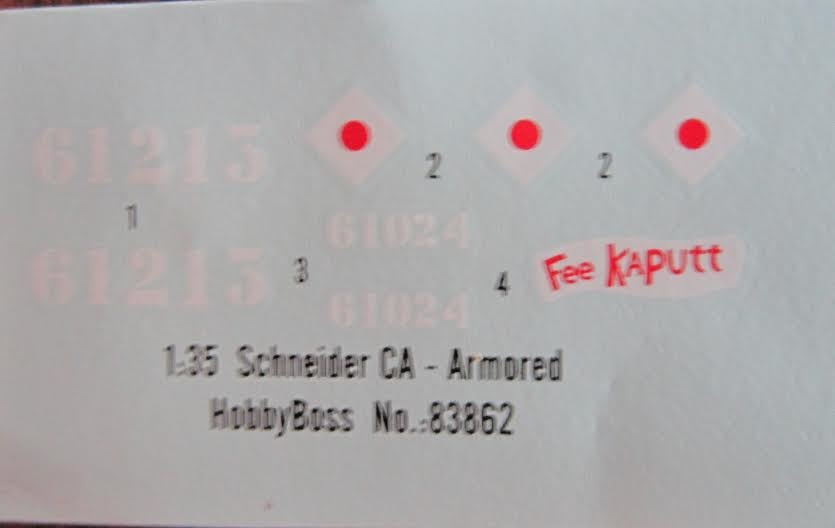 This is a thoroughly detailed kit. However, there are no figures included or clear part for the headlight lens.

I want to also get either Hobby Boss's or Takom's kit of the WWI French St. Chamond.