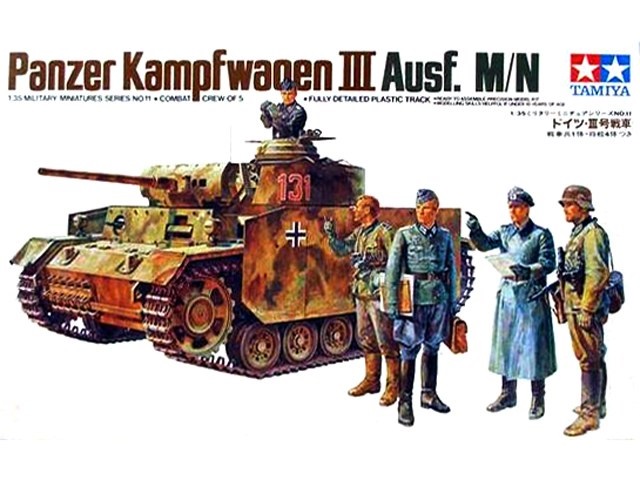 This kit first appeared twice in the 1960's. One in a scenic box art and once in an all white background box art.

The Panzerkampfwagen III, commonly known as the Panzer III, was a medium tank developed in the 1930s by Germany, and was used extensively in World War II. The official German ordnance designation was Sd.Kfz. 141. It was intended to fight other armored fighting vehicles and serve alongside and support the Panzer IV; however, as the Germans faced the formidable t-34, more powerful anti-tank guns were needed, and since the Panzer IV had more development potential, it was redesigned to mount the long-barreled 7.5 cm KwK 40  gun. The Panzer III effectively became obsolete in this role and was supplanted by the Panzer IV. From 1942, the last version of Panzer III mounted the 7.5 cm KwK 37 L/24, better suited for infantry support. Production of the Panzer III ended in 1943. However, the Panzer III's capable chassis provided hulls for the Sturmgeschutz III assault gun until the end of the war.

Tamiya is an old prolific model company based in Shizuoka City, Japan. They manufacture all manner of model subjects in the popular scales. Their U.S. importer and distributor was Model Rectifier based in Edison, NJ.

The box art shows a Pz.Kpfw. III Ausf. M/N and four figures standing next to it posed against one of Tamiya's signature all-white backgrounds that they use for most of the kit's box arts.

The tank is in a base of earth yellow with dark green and red brown splotches over it. It has a red turret no. 131 outlined in white and a small German cross on the sides of the armored skirts. A crewman is looking out of the upper turret hatch with a pair of binoculars and wearing a black Panzer uniform.

Standing next to the tank is 2 infantrymen in grey uniforms and black jack boots. They each carry full field gear. One is bare headed and the other wears a steel helmet and is armed with a MP 40.

The other two figures are officers wearing grey uniforms.

One has jodphur pants trucked into black jack boots and is wearing a side cap. He is carrying a brief case and a map folder.

The other officer wears a peaked officer's house and a grey overcoat. He is pointing with his right hand and holding a map in his left hand.

This box art is repeated smaller and in color on one side panel, followed by a 4-view of the tank in overall earth yellow with no markings.

The other side panel has the scenic color box arts of 5 other AFV kits that Tamiya markets:

No kit numbers are provided for these 5.
​WHAT'S IN THE BOX:

Page 1 begins with a black and white photo of the model and figures made up, over the history of the Pz.Kpfw. III and a German organizational chart.

Page 2 has a parts names listing and the parts trees illustrations, above the first 2 assembly steps.

Pages 3 through 5 give a balance of a grand total of 14 assembly steps.

Page 6 gives the 15th assembly step for the figures assemblies and colors.

Page 7 has 5 side profiles and a front and rear view of the tank. Decal application and painting instructions are on this page with illustrations of the division marks provided on the decal sheet and the identities of these 9 divisions.

Page 8 continues with the history of the tank that was started on page 1, another organizational chart and a cut-away drawing of the Pz.Kpfw. III Ausf. M/N. 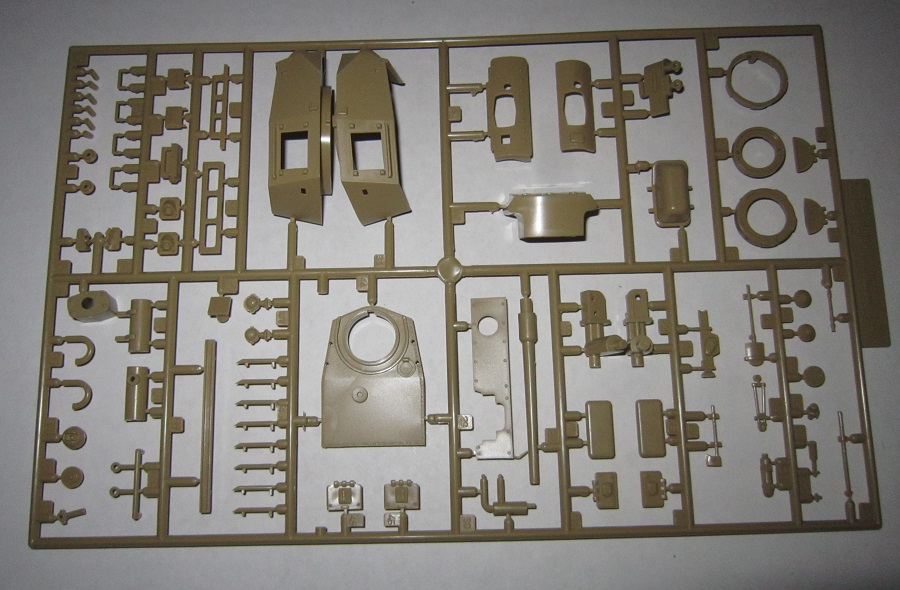 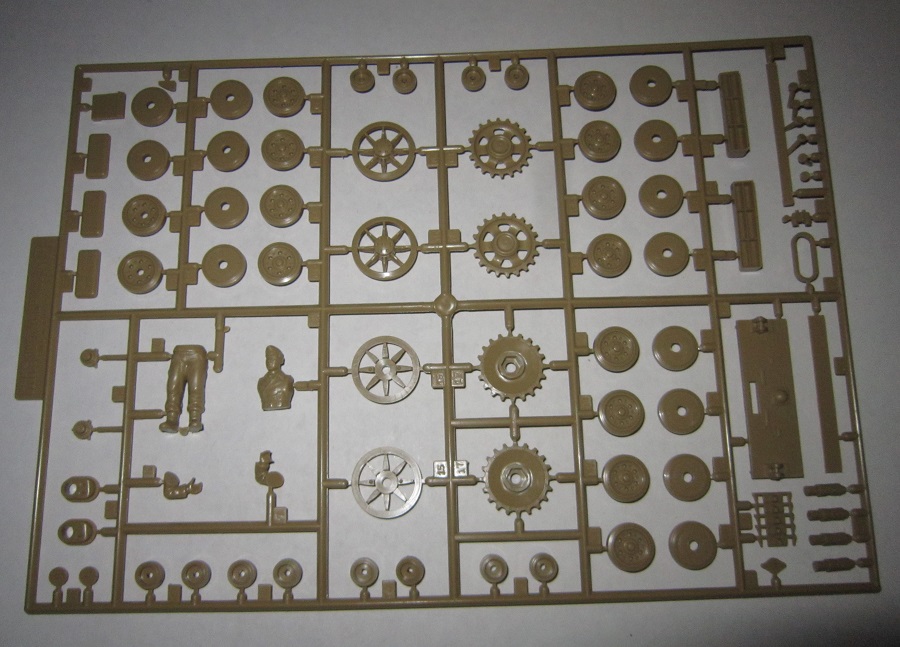 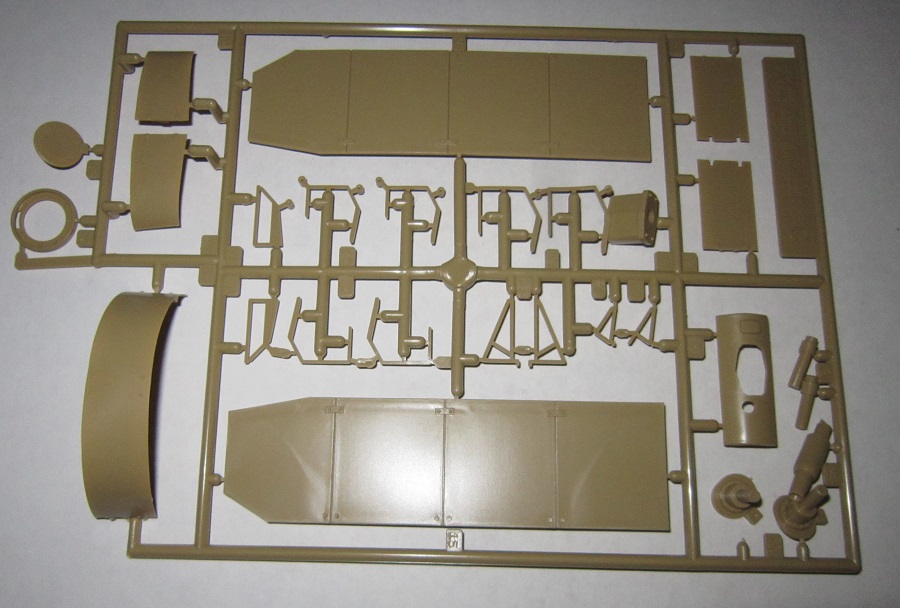 ​The first dark green tree is not alphabetized. It holds the four standing figures. They are all full bodied with separate arms. (12 parts) 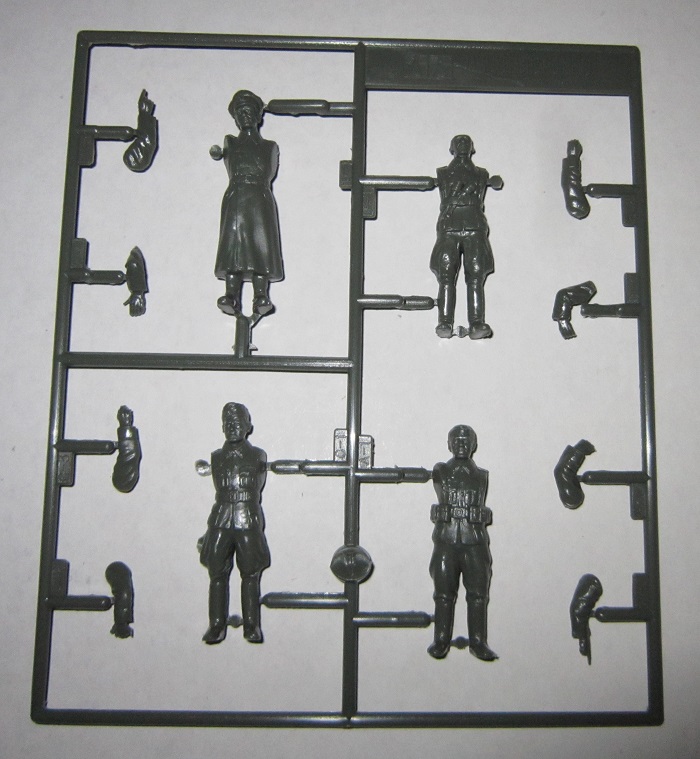 ​The second smaller dark green tree is not alphabetized either. It holds: base plates for under the feet of the 4 figures, a brief case, 2 rolled tarps, a rifle, a MP 40, 4 pistol holsters, 2 map cases, a MP 40 ammo pouch, 2 steel helmets, 2 rifle ammo cases, 2 gas mask canisters, a bayonet in scabbard 2 canteens and 2 pair of binoculars (27 parts) 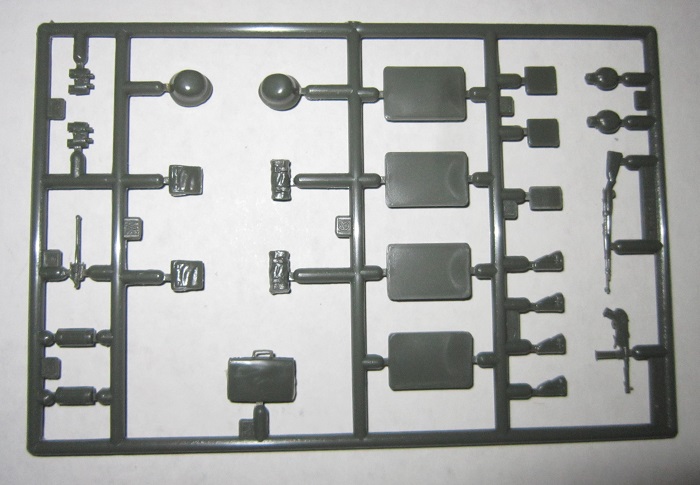 ​The tree of black vinyl poly caps is next (18 parts)

The one piece upper hull roof and engine deck and hull tub. 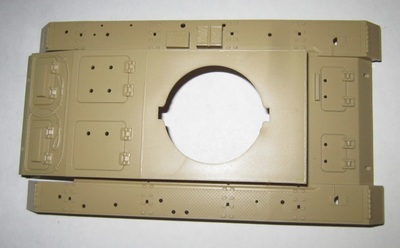 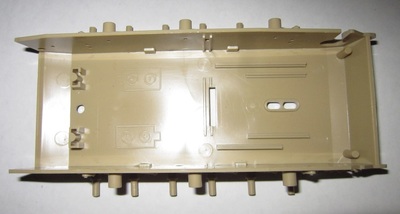 The lower hull tub is also one piece.
The last items in the kit are the decals and a folded catalog of Tamiya kits. 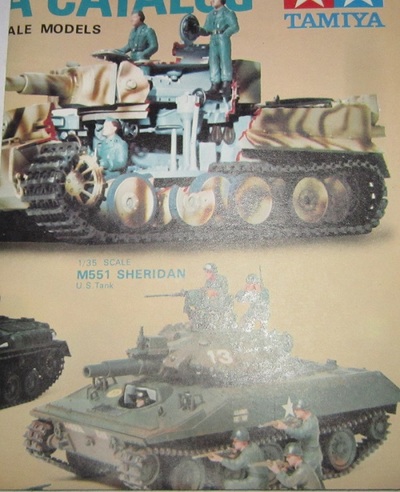 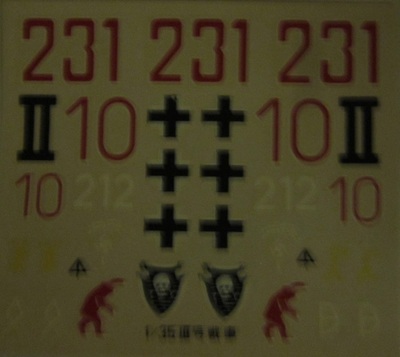 ​External detail and detail inside the turret are good. But there is no hull interior details and the hull tub has motorization holes in it that need to be puttied up to make a good static model.

I purchased my kit over 40 years ago at my local hobby shop that went out of business.