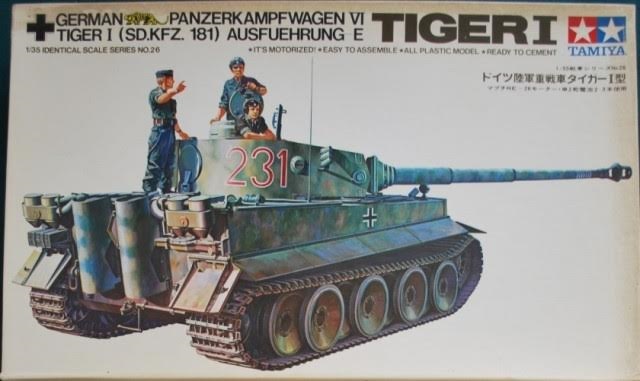 Kit no. MT126
By Ray Mehlberger

Tiger I  was a German heavy tank of World War II deployed from 1942 in  Africa and Europe usually in independent heavy tank battalions. Its final designation was Panzerkampfwagen VI Tiger Ausf. E often shortened to Tiger. The Tiger I gave the Wehrmacht its first armoured fighting vehicle that mounted the KwK 36 88-mm gun (not to be confused with the 8.8 cm Flak 36). Only 1,347 were built between August 1942 and August 1944. Production was phased out in favour of the Tiger II.

While the Tiger I has been called an outstanding design for its time, it was over-engineered, using expensive materials and labour-intensive production methods. The Tiger was prone to certain types of track failures and breakdowns, and was limited in range by its high fuel consumption. It was expensive to maintain, but generally mechanically reliable. It was also difficult to transport, and vulnerable to immobilization when mud, ice and snow froze between its overlapping and interleaved Schachtellaufwerk-pattern road wheels, often jamming them solid. This was a problem on the Eastern Front in the muddy rasputitsa season and during extreme periods of cold.

The tank was given its nickname "Tiger" by Ferdinand Porsche, and the Roman numeral was added after the later Tiger II entered production. The initial designation was Panzerkampfwagen VI Ausführung H ("Panzer VI version H’’, abbreviated PzKpfw VI Ausf. H) where 'H' denoted Henschel as the designer/manufacturer. It was classed with ordnance inventory designation SdKfz 182. The tank was later re-designated as PzKpfw VI Ausf. E in March 1943, with ordnance inventory designation SdKfz 181.

Today, only a handful of Tigers survive in museums and exhibitions worldwide. The Bovington Tank Museum's Tiger 131 is currently the only one restored to running order.

The box art shows a Tiger I in a partially rear and side illustraton. It is overall Panzer grey with a red no. 231 outlined in white on the turret sides and a small sized German cross on the hull sides. Two crewmen are looking out the upper turret hatches and a third one is standing on the engine deck. They all wear black Panzer uniforms.

One side panel repeats the box art in color smaller, followed by specifications of the tank:

The other side panel shows scenic color box arts of other AFV kits that Tamiya markets:

There was a baby Mabuchi electric motor once in the kit, but I pulled that out years ago and don't know what I did with it.

The parts trees are in 3 sealed cello bags. 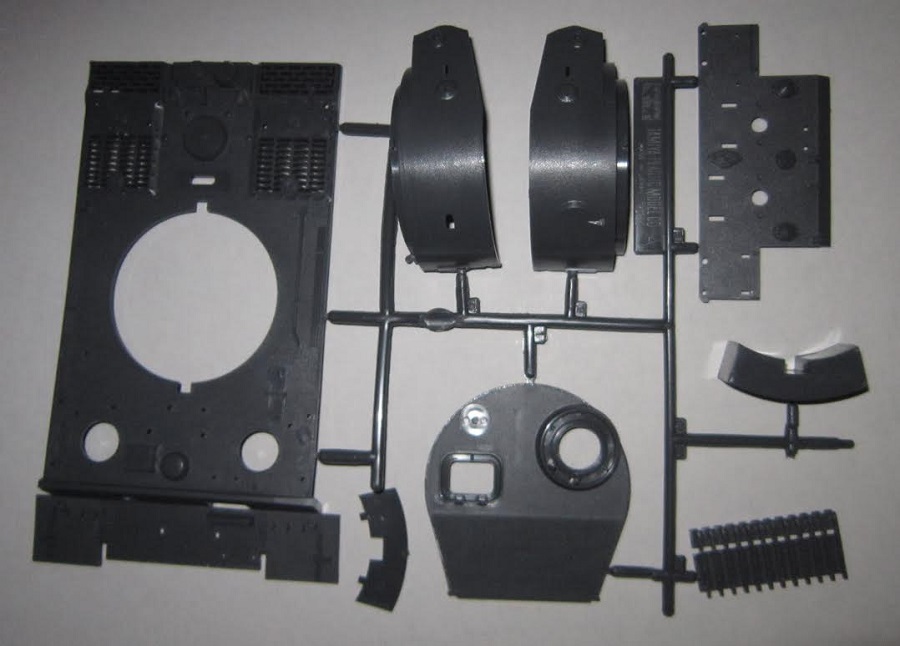 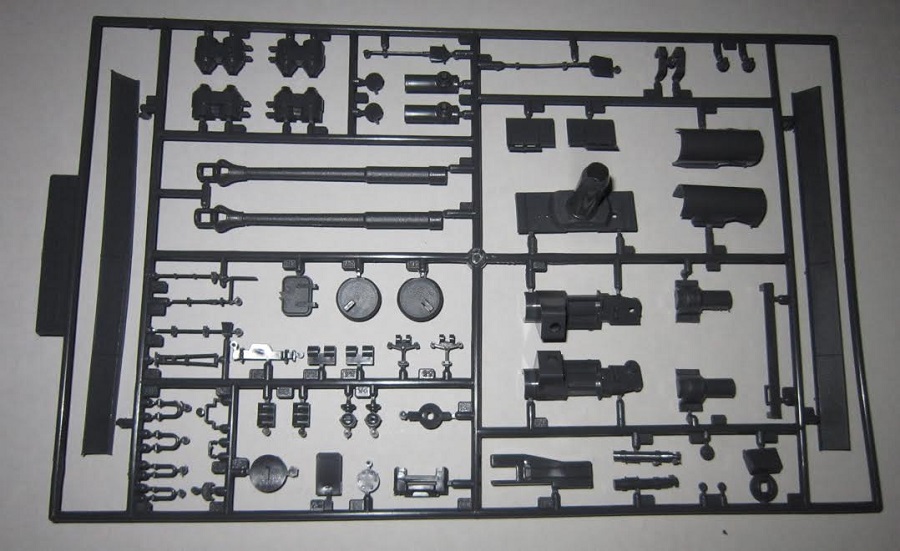 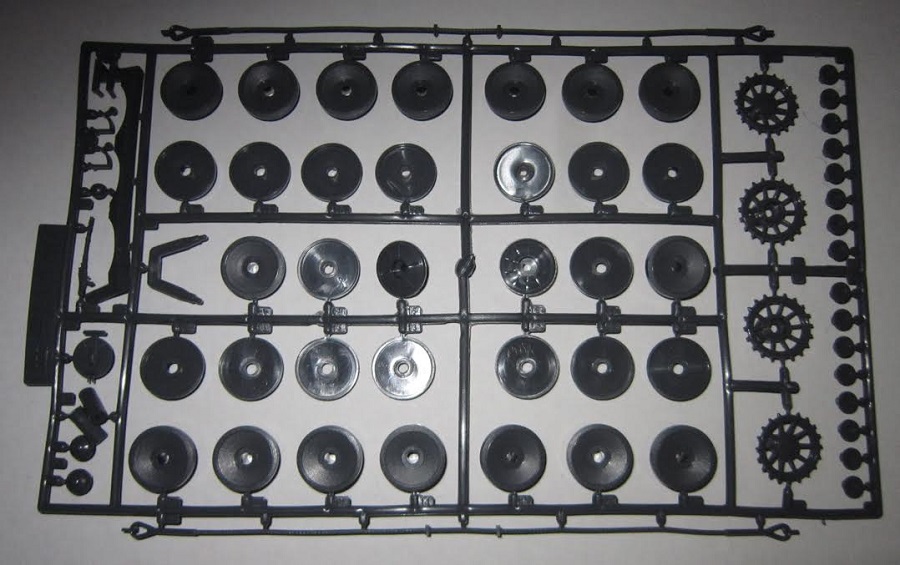 ​The dark green tree is not alphabetized. It holds 2 crew figures divided into separate full bodies and arms and 2 base plates for under their feet and a Tamiya name plate. Copyright date on this tree is 1968. 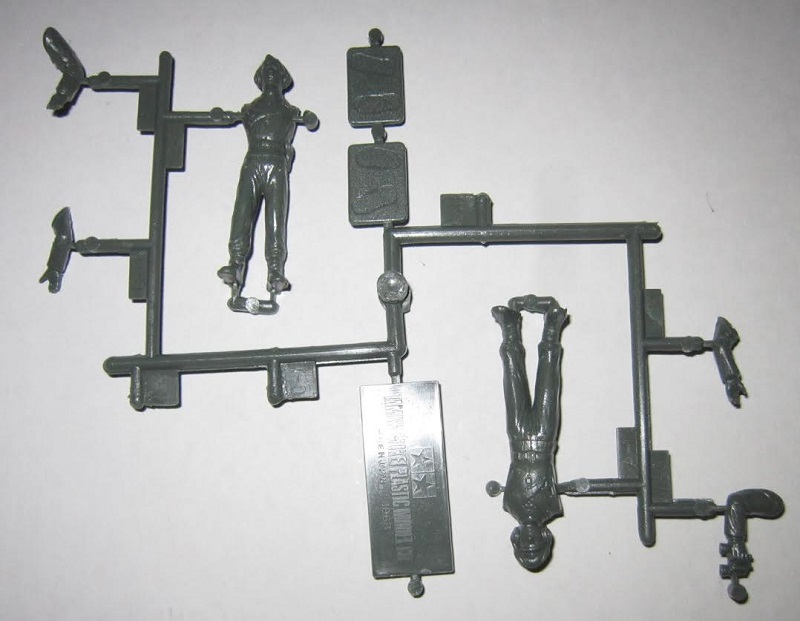 ​The black vinyl treads are next. There are 2 long runs of them. These are the old type that have to be heat welded into a loop or super glued. Not the newer glueable type seen nowadays.

The two black vinyl lengths of tubing is for the Fiefel air filtration system.

​The cello bag full of motorization parts is next. There is a metal gear box, some rods, wire and metal rods in it.

I only ever built a motorized model kit of Tamiya's years ago. It was their British Saladin armored car. Boy...did it ever move fast. I have at least one or two other motorized kits in my stash, but never built either of them. One is by Bandai and it has a trailer that you put the batteries in for running the tank. 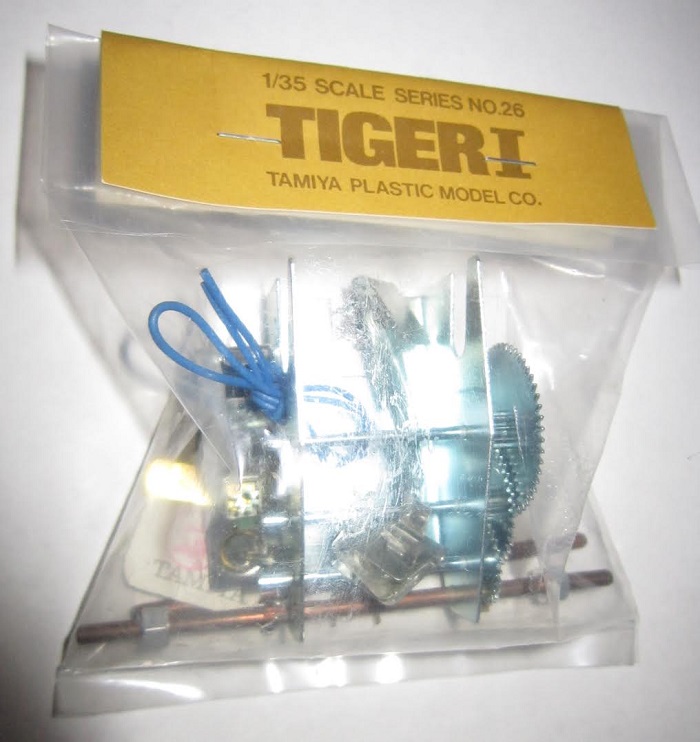 The decal sheet supplied in the kit. 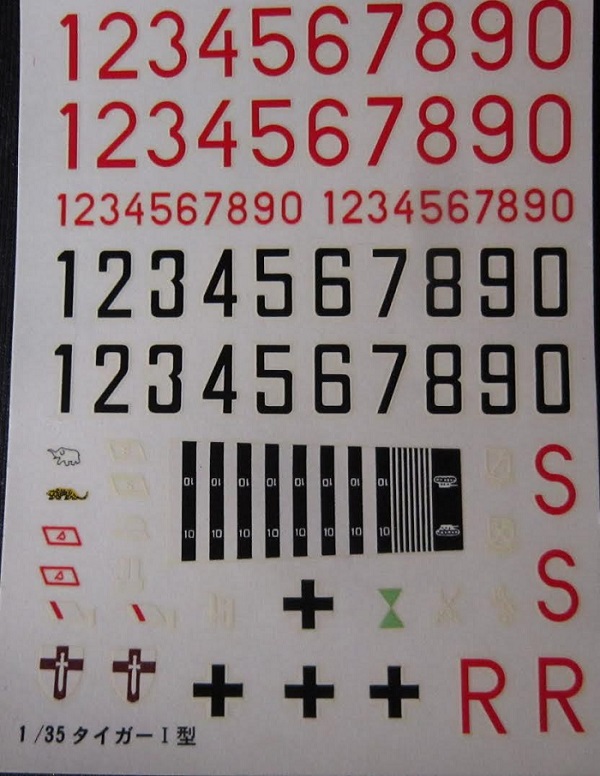 Tamiya also included a small folded catalog of their kits.

This is a very long history and it continues on to completely fill page 2 and the left side of page 3.

The right side of page 3 has a listing of the names of the parts.

Page 3 has some painting instructions over illustrations of the division markings and tactical markings provided on the decal sheet and their identities.

The right side of page 3 has a formation chart for a Panzer division's size in either 1942-1943 or 1944-1945 over a 4-view illustration of Whittman's Tiger I and a head on shot of a Tiger I in captured British marks.

Pages 4 through the top of page 8 give a grand total of 10 assembly steps.

The first 3 steps are for assembling the motorization parts.

Page 8 has the painting instructions for the crew figures. At the bottom is a list of other AFV kits Tamiya markets and 6 black and white photos of AFV kits made up.

The hull has some motorization holes in it to fill to make a good static model.

​I bought my kit at my local hobby shop over 40 years ago.