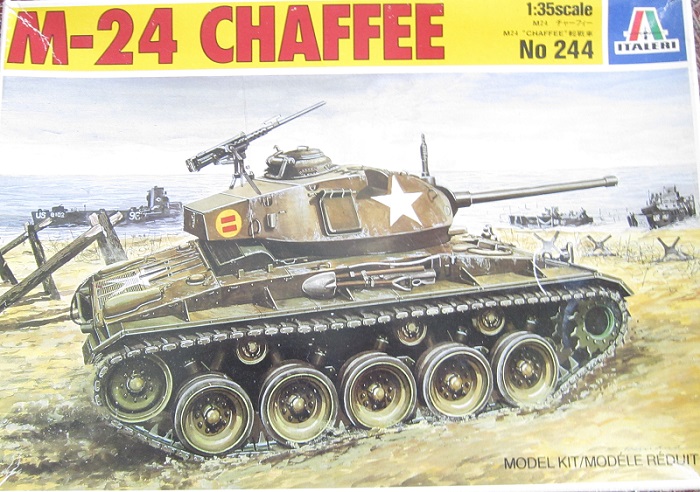 The Light Tank M24 was an American light tank used during the later part of World War II and in postwar conflicts including the Korean War and, with the French, in the War in Algeria and the First Indochina War. In British service it was given the service name Chaffee, after the United States Army General Adna R. Chaffee, Jr., who helped develop the use of tanks in the United States armed forces.

Italeri is a prolific model company based in Italy. They make all manner of model kit subjects in the popular scales.

This kit comes in a shrink wrapped tray and lid type box.

The box art shows a Chaffee on the D-Day beaches passing anti-tank obstacles and with 3 landing craft in the background. It is in overall olive drab with white stars on the sides of the turret and on top of the engine deck. A yellow circle with 2 horizontal red bars on it is on the sides of the rear turret bin.

One side pane has one paragraph histories of the Chaffee in Swedish, French, Japanese and Chinese. These are all marked with the flags of the countries that speak these languages. The kit is said to not be for modelers under 3 years of age. The kit was made in Italy and Italeri’s street address there is provided.

The other side panel continues the one paragraph histories in English, Dutch, Spanish and Italian, again with the flags.

The instructions consist of a single sheet that accordion folds out into 8 pages in 7” x 13” page format.

Page 1 begins with a black and white photo of the kit made up in U.S. markings. Only white stars are on it. This is followed by a one paragraph history of the Chaffee in 10 languages including English.

Page 2 begins with ATTENTION-USEFUL ADVICE in the 10 languages, followed by the parts trees illustrations and a paint color listing. No hobby paint companies are mentioned.

Pages 3 through 6 give a grand total of 8 assembly steps. The bottom of page 6 has the decal application instructions.

Spread across pages 7 and 8 are five 4-views for marking and painting schemes. All the schemes are in overall olive drab.

2.    A French Army tank of Esc. deM, ter; Indo China 1953. It has a large white number 9 on the turret sides with an ace of hearts insignia next to it. On top of the glacus plate is a black band with stenciled white lettering that says OUDENARDE and a second black band with a French flag on it followed by white number IC-93015. The white 9 on the other turret side has a large elaborate multi-colored shield design next to it.

3.     A British tank of H.Q. Sqdn., 1st R.T.R., 22nd Armoured Brigade, 7th Armoured Division, Germany 1946. It has a yellow diamond on the sides of the turret with the nickname TRIGGER HAPPY in white. The white serial number T330553 is on the rear of the hull sides. A badge that is divided into a white top and red bottom with a red deer’s head on the white section and a smaller red badge with a white circle on it that has a red mouse in the circle are on the front and rear of the hull

4.     An Italian tank with the “Ariete” Division, 1953. It has a bar on the turret that is divided into equal sections of blue, red and white. The Italian flag is on the bow and rear of the tank with the division’s ram’s head insignia and the black serial number EI-105120.

5.     A Japanese tank with their SDF (Self-Defense Force, 1957. It has the Japanese flag on the sides and top of the turret. A white serial number 90-0400 followed by a chrysanthemum flower symbol (that is nowhere on the decal sheet) and another serial number 14 with 3 Japanese letters. The Japanese flags on the large decal sheet have their colors REVERSED. They are red background with white circles in the center. However. Tamiya has addressed this problem by adding a small decal sheet with the flags colored correctly on it. However, I wish they had added the chrysanthemum symbol that is missing on the large decal sheet.

Because none of the parts trees in the kit are in cello bags. The hull top part broke off its parts tree due to friction against the other trees.

There is something rather strange in the instructions. Each step has a number spread next to the assembly step number. Example: 28-48….at first I thought this indicated the parts numbers used in the step, but other numbers not in this series are also used in that step.

There are no interior details other than the main gun breech inside the turret. The doors over the driver and radio operator are separate and can be posed open, but there is nothing inside there to 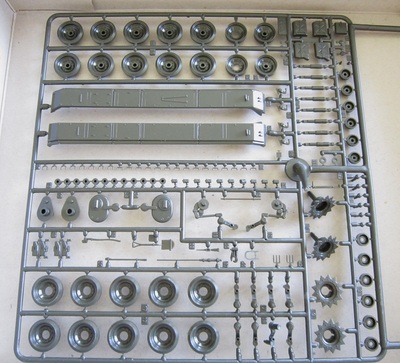 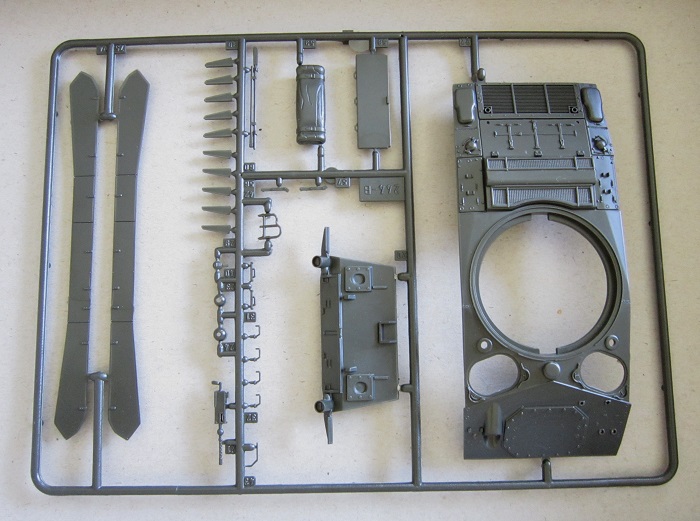 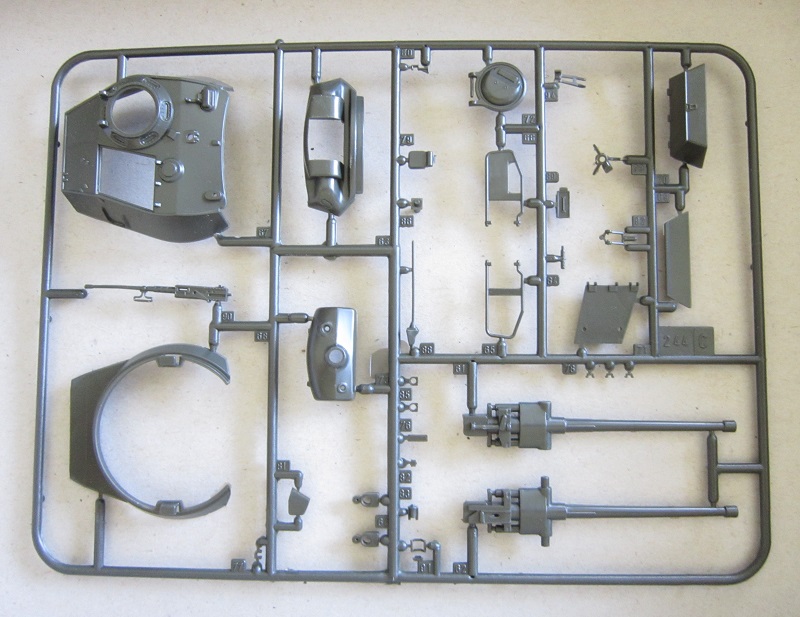 The silver colored vinyl rubber-band type tracks are next. There are 2 long runs. These are the type that are supposed to be heat welded together and not the newer glueable ones. However, they are nicely detailed inside and out.

Finally are the two decal sheets. The smaller one is a correction to the wrong Japanese flags printed on the larger sheet. 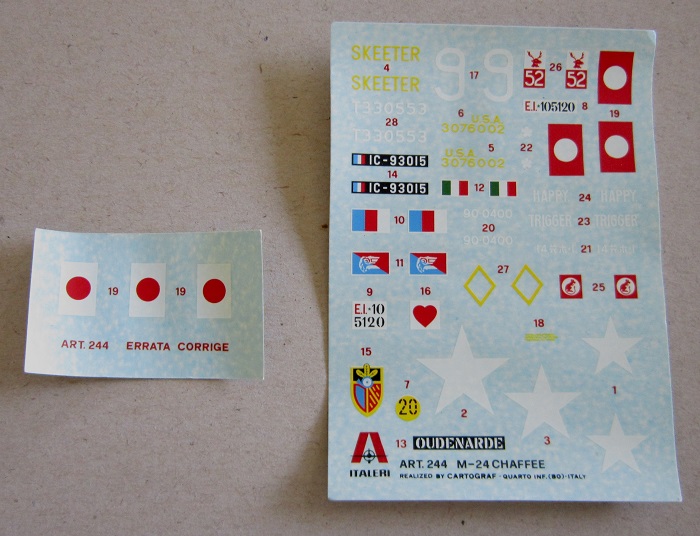 I recommend this kit to modelers of average building skills. I purchased my kit back in the 80’s at my local hobby shop. It is now out of production but may appear sometime on eBay.