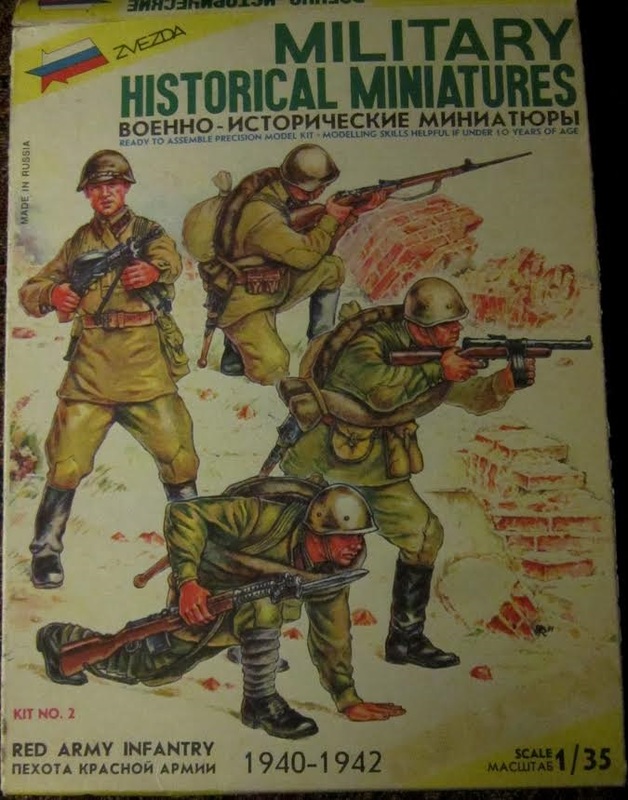 The set comprises of Red Army infantry men of the first period of WWII, dressed in typical summer uniform. These uniforms were shaped by the year of 1940 and existed with slight changes and in different versions up to the beginning of 1943.

At that time, shoulder loops were put into service and soldier’s blouse style was changed accordingly.

Their rank insignia was in a form of red triangles and were fixed upon the blouse collar patches.

Infantry collar patches were crimson in color and had black edging along three sides.

Zvezda is a model company based in Russia.

This kit comes in an end-opening type box, held shut with scotch tape. It is not shrink-wrapped. I am no fan of this type of box, because parts always seem to find their way past the end flaps to become lost.

The box art shows 4 Soviet infantrymen behind a demolished brick wall. One is standing and pointing a DP 1927 model machine-gun.

The second infantryman is kneeling and pointing a Mosin rifle with bayonet attached.

The third infantryman is crouched and holding a SVT-40 rifle with bayonet attached.

The fourth infantryman is standing and pointing a PPD-38 machine gun.

All four figures are wearing steel helmets. The crouching soldier is wearing puttees over low shoes. The other 3 have jack boots.

Three of the soldiers have rolled great coats over their shoulders. The standing soldier with the DP machine gun does not.

They all wear various field equipment slung on their belts.

The back of the box has 2-views of each of the four figures to use as painting guides. The box says the kit was made in Russia. Text on the box is in Russian and English. 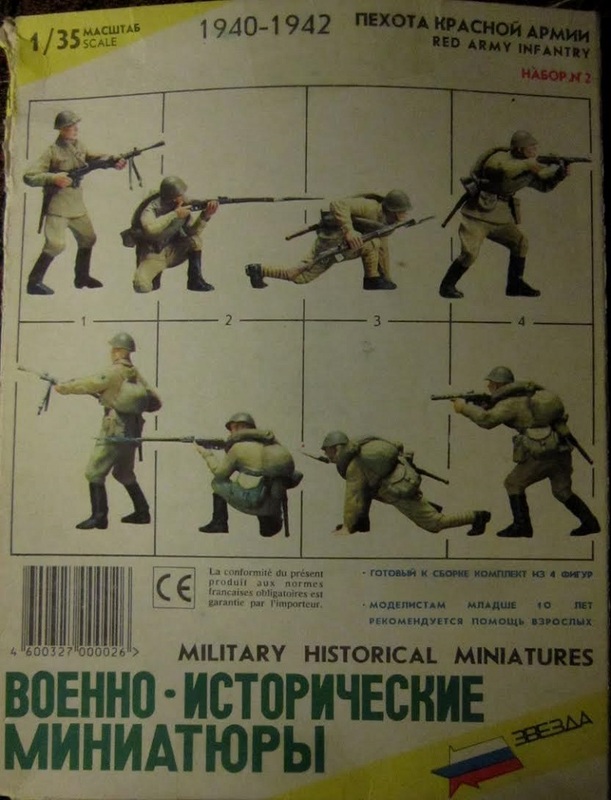 The other side panel has color illustrations of various uniform insignias.

Inside the box is one light tan tree of parts in an un-sealed cello bag and the instructions.

The instructions consist of a single sheet that is folded in the center to create four pages in 6 ½” x 8 ½” page format.

The bottom of the page has the assembly instructions which show a 2-view for each of the four figures.

Pages 2 to 4 have detailed descriptions of the uniforms, insignia and equipment that these infantrymen used. This is in Russian, English, Italian and German.

The bottom of page 4 has black silhouettes of the four figures that are in Zvezda’s kit no. 1 of Red Army Infantry 1940-1942 figures, (which I also have) followed by a illustration of a BT-7 tank.

This single tree in the kit is alphabetized and numbered, but there is no parts tree illustrations per se in the instructions. The assembly drawings have arrows with the numbers pointing to the parts of the figures. 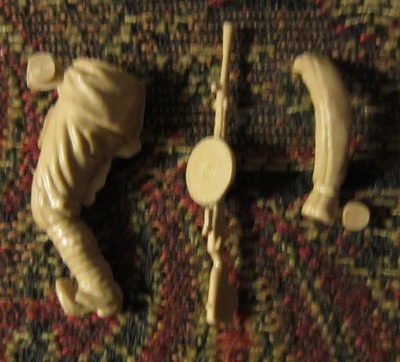 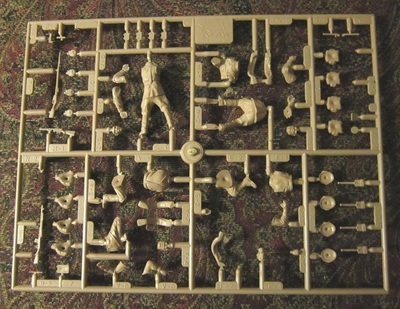 This set will go nicely into a lot of diorama ideas. Highly recommended.

I got my set in trade with a fellow in Krakow, Poland many years ago.