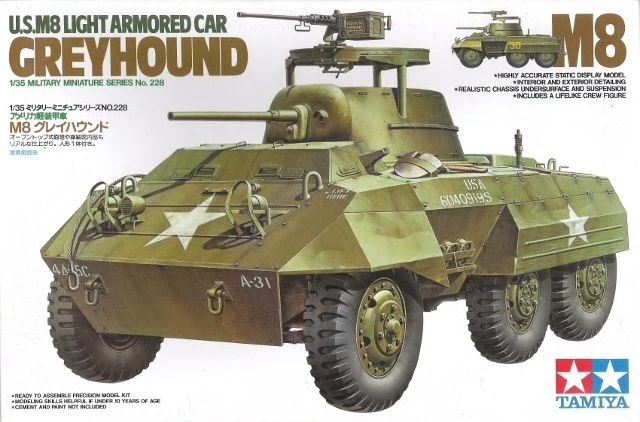 I paid $32.00 for this kit at a local shop that since has gone out of business.

The M8 Greyhound was used during WWI primarily as an escort and reconnaissance vehicle. The 8-wheeled vehicle’s light weight made it a maneuverable vehicle.

Development of the M8 began in 1941, and it was originally planned for armor support, but was later shifted to reconnaissance. The Ford company developed a prototype in June 1942.

The Greyhound had a Hercules JXD, rear-mounted, water cooled engine, capable of generating 110 hp at 3000 rpm. The transmission had a 4-speed forward, 1-speed reverse gearbox.

The six-wheel configuration and engine made the Greyhound a stable vehicle with a maximum speed of 88.5 km/h and a range of 563 km. The steel plated armor on the body ranged from 19mm to 32mm thick, the open-topped turret had 19mm thick armor.

The 12.7mm M2 machine-gun was added to the cupola. The Greyhound was equipped with a M700 gun sight telescope.

They were mainly used in Europe, but they also served in the Pacific. The M8 was supplied to the Allies, including Britain and France. It is the British who nicknamed the M8 as the “Greyhound”. Many countries would continue to use the M8 well after the conflict.
THE KIT:

The cover art shows a color illustration of the Greyhound posed against one of Tamiya’s signature all-white backgrounds that they use for the majority of their box arts.

One corner of the box art says it is a ready to assemble precision model kit. Modeling skills helpful if under 10 years of age. Cement and paint not included.

One side panel begins with a color side view of a Greyhound, that is a cutaway illustration showing the interior of the driver’s compartment and the interior of the turret. It is overall olive drab with a white nickname “COLBERT” on the side of the rear fenders. It is minus the ring mount and machine gun on top of the turret and instead has a small odd shaped bracket.

This is followed by a paragraph in Japanese and color illustrations of the commander figure, who is standing and looking through a pair of binoculars. He wears a khaki uniform, steel helmet, paints blouse into tan gaiters over low brown shoes and has a pistol holster on his belt.

Also illustrated is a steel helmet, binoculars and pistol holster,

Copyright for the kit is given as 1998, over Tamiya’ address in Shizuoka City, Japan.

On its sides there is a large yellow letter C, followed by a white stenciled serial no. USA 6933442-S, a large yellow 30 and a white nickname “COLBERT”. It was with the 2nd Armored Division, 82nd Armored Reconnaissance Battalion, C Company, 3rd Platoon. It is the same “Greyhound” shown cut-away on the other side panel. Tamiya’s address is repeated.

The inside walls of the boxes tray have black and white illustrations down the side walls of Tamiya tools and a pair of safety glasses. The insides of the end walls show a Tamiya air brush and compressor and bottled and spray paints.

The inside floor of the tray has 20 black and white illustrations out of Tamiya’s photo album.

The kit holds 5 olive-drab parts trees and a length of white string and black vinyl poly-caps in 4 stapled-shut clear cello bags, the decal sheet and the instructions.

The instructions consists of a single-sheet that accordion-folds out into 10 pages in 6 ¾” x 10 ¼” page format.

Page 1 begins with a black and white photo of the model made up with the commander figure standing next to it. It is in the box art scheme (already described above).

Below it is the history of the Greyhound in 4 languages, including English.

Page 2 begins with READ BEFORE YOU BEGIN instructions, over illustrations of suggested cement and tools to use, a suggested paint color listing of Tamiya brand hobby paints and PRECAUTIONS  in the 6 languages,

The bottom of page 2 through to the top of page 8 gives a grand total of 16 assembly steps.

The 16 step also includes assembly and painting instructions for the commander figure.

The bottom of page 9 as a painting and marking guide, showing a 3-view of the Greyhound in overall olive drab. It has a large white star on top of its nose and on the sides of its rear fenders.

Between the front and rear fenders there is a stenciled white USA over serial no. 6040919S. It was with the 4th Armored Division, 25th Cavalry Reconnaissance Squadron, Mechanized A Troop, 1945.

To its right there is a top view of the scheme shown on the side panels. It further shows a large white circled star on top of its nose and the top of the engine deck.

Page 10 is another marking and painting guide, showing two 3-views of the Greyhound.

The first one overall olive drab, with a white star on the sides of its turret, white tired pressure information on the sides of the front fenders, stenciled white serial no. USA 6035718 S between the fenders on its sides and a small white star on the right side of the rear It has a white nickname “AUSTIN” above the tire pressure information. It is minus the machine gun and its mount on top of the turret and shows the odd shaped thing on the forward end of the turret and a short antenna too.

It was with the 7th Armored Division, 87th Cavalry Reconnaissance  Squadron , Mechanize A Troop, August 1944, France.

The second Greyhound also is overall olive drab, on the sides of the front fenders it has a black rectangle with white nickname “SAINT MIHIEL” on it, on its sides between the front and back fenders there is a white rectangle with black serial no. MF 44289 on it, followed by a diagonal stripes of red, white and blue. On the center of the rear fenders there is a large vertical rectangle with a white diamond in the center that is surrounded by alternating red and blue corners, in black on the white diamond is “FRANCE D’ABORD” over a small flaming circle.

It has the white rectangle repeated on the top edge of the left rear fender over narrow horizontal red. white and blue stripes. On the back of the right rear fender there is “40 MPH”. However, this is nowhere on the decal sheet.

Decal application instructions are down the left side of the page.

The bottom of the page has an aftermarket service card provided.

This is all in 4 languages, including English.

Trees are alphabetized, but not illustrated anyplace in the instructions. They do, however have part number tabs next to the parts on the trees. Bad move Tamiya!

There are 2 identical olive-drab letter A trees. They hold: the wheels, leaf springs, ammo rounds, suspension arms etc. (44 parts each). 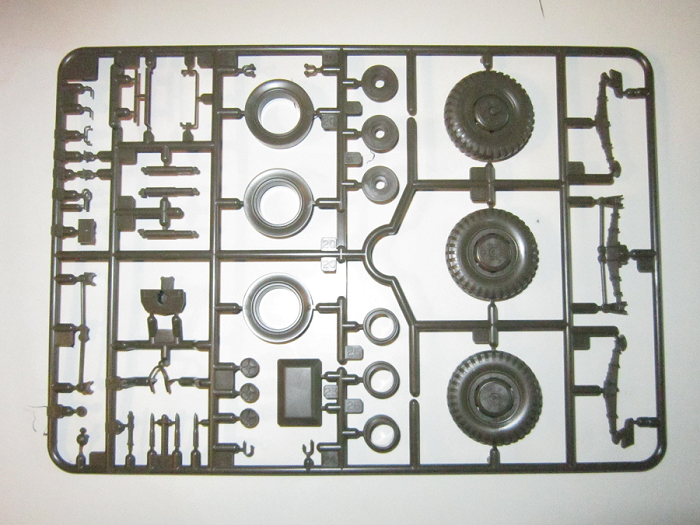 A set of polycaps is included to add to the wheels to mount them onto the axles. 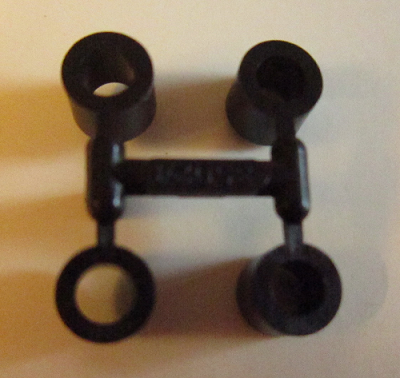 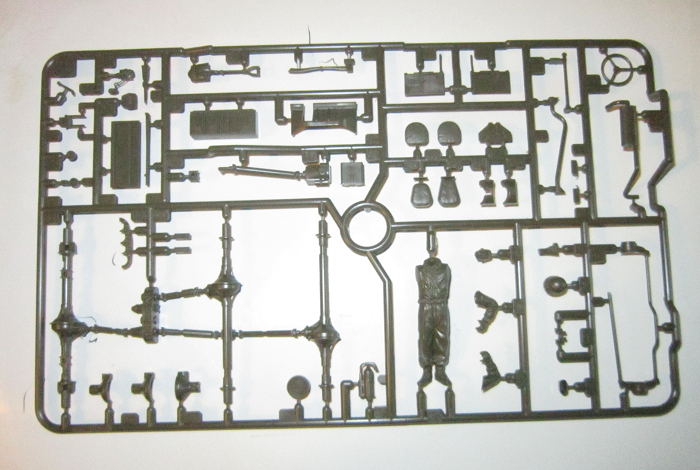 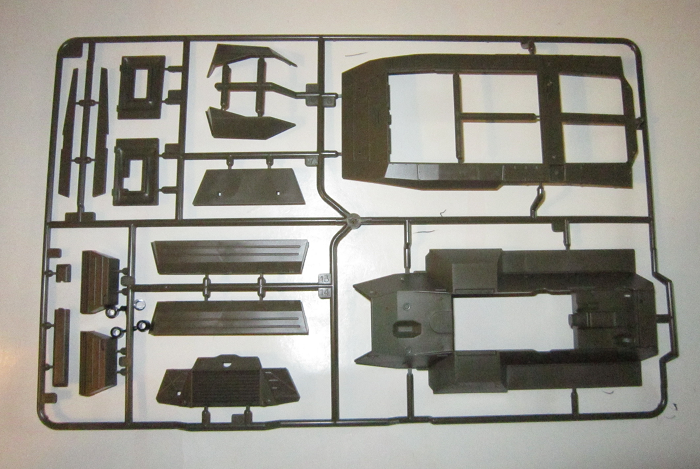 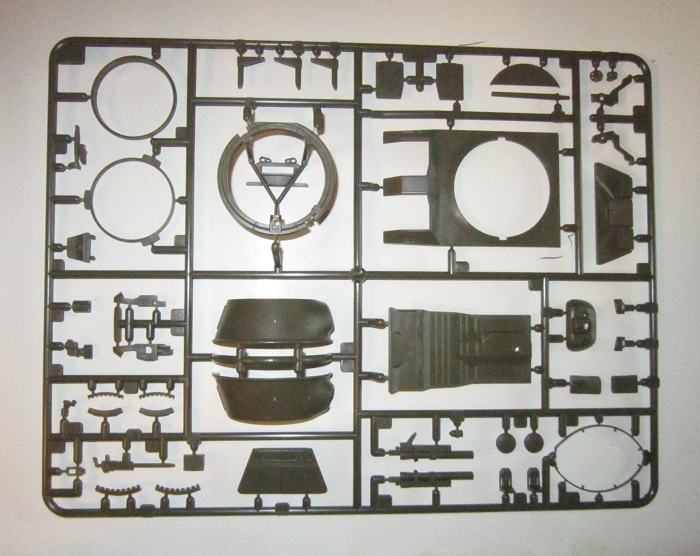 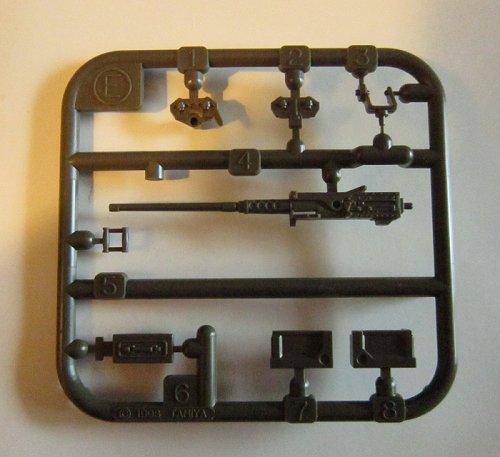 A string is supplied to make the tow rope. 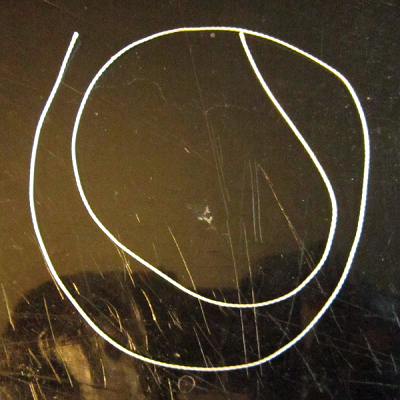 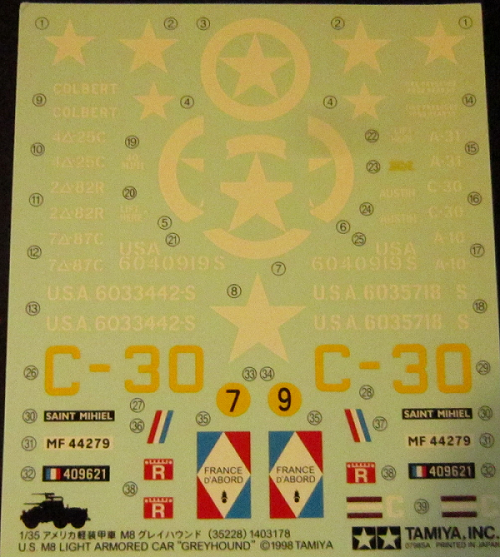 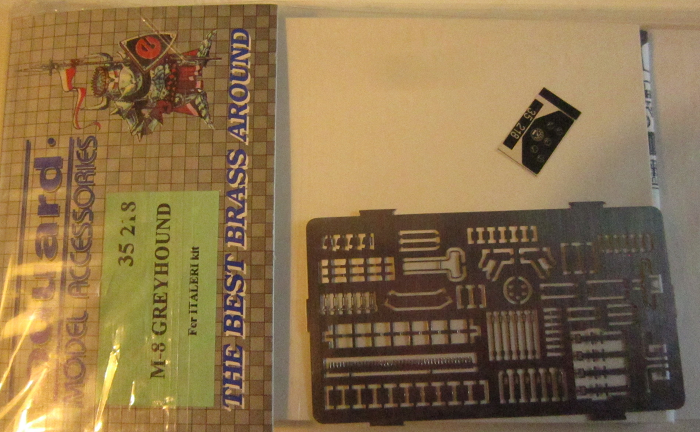 ​There are 2 frets in the set and a black photo negative of the dashboard instrument dial faces.

I also copied a review of this kit off the web and added it to the kit. 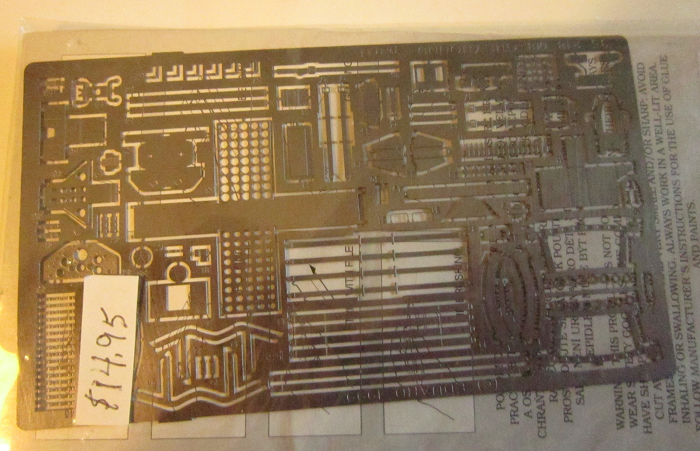 There are no clear parts in the kit. Detail is excellent.