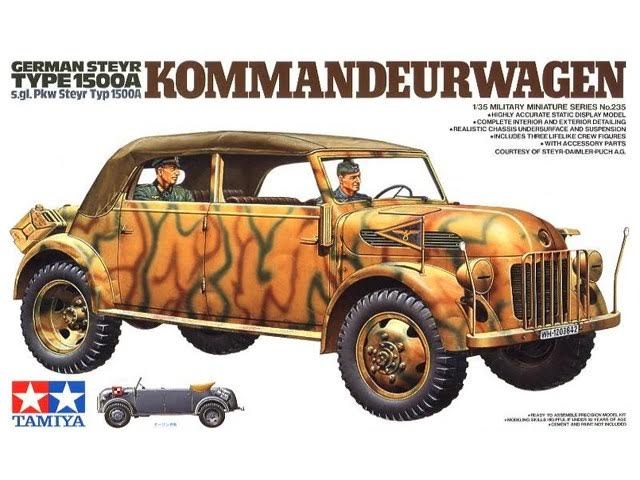 In the early half of WWII, the mechanized units of the German army recorded many victories by employing the “Blitzkrieg” strategy. These triumphs can be attributed to both the fighting units on the front lines and the clever strategies and know-how of the commanders. To move these high ranking commanders from place to place, various vehicles were necessary. One of these vehicles was the Kommandeurwagen, produced by the Austrian firm Steyr. Its development was based on the military transport vehicle; Steyr 1500A/01, produced in accordance with the vehicle standardization “Schell Programme” of 1940.

Development, using the chassis of a 1500A truck, the 1500A/01 housed an eight cylinder, eighty-five horse power gasoline engine, a four forward/one reverse gear transmission, a front wheel torsion bar, and a leaf spring rear suspension. The Wehrmacht, impressed with the maximum speed of 100 km/h on paved roads and excellent running performance, ordered the Steyr firm to produce a modified version for command use.

In contrast to the eight passenger capacity of the 1500A/01, the Steyr Kommandeurwagen , which was designed for comfort, had a capacity of only five passengers. All of the seats were leather and the right front seat could be reclined and used as a bed. The Kommandeurwagen’s role as the wheels for the “elite” of the German army stretched from Russia to North Africa.

The kit comes in a tray and lid type box. The box art is in Tamiya’s usual style, with a color illustration of the kit’s subject on a chalk-white background.

It shows a Steyr in a base-color of dark yellow (dunklegelb) with a stripe pattern of red-brown (rotbraun) and dark green (dunklegrun) with a eagle pennant on the front fender. A smaller illustration, below the larger one, shows a Steyr in overall German gray.

Inside the box are 4 light-tan colored trees of parts, each individually cello-bagged. There are 4 black vinyl poly-caps, in a small cello, that are inserted into one of the 4 bags with the trees of parts. A piece of black screen material shares one of these bags too, as well as the small decal sheet.

There are 2 individual parts: the hood and rear body trunk panel that each are individually cello-bagged. Also, included is a tree of clear window transparencies. The instruction sheet and decals complete the contents.

The instructions consist of a single sheet, that accordion folds out into 10 pages.

Page one of the instructions begins with a black and white photo of the model and figures made up. This is followed by the history of the Steyr, in 4 languages – including English.

Page two begins with “read before assembly” instructions, illustrations of hobby tools suggested to use for building the kit, a Tamiya paint listing and general instructions followed by the first assembly step.

Pages three through eight give us a total of 13 assembly steps.

1. A five-view drawing of a vehicle in an unknown division, Ardennes, 1944 (the box art)

2. One view of a vehicle of the 17th Army Commanding General Ruoff, Russia, Autumn 1942

Page ten shows 2 more views of Ruoff’s car and a three-view of a vehicle from an unknown unit,

Eastern Front, in a white-wash over German gray scheme. Decal application instructions and coupon (to send to Tamiya to replace any missing kit parts) complete this page.

Parts tree, letter A, holds: the vehicle’s frame, engine, drive shaft, suspension parts, front fenders, exhaust pipes and one of the figure (standing). This figure is divided into a body, arms and head. A pair of binoculars, a pistol in a holster and a map case are provided for him. (27 parts). 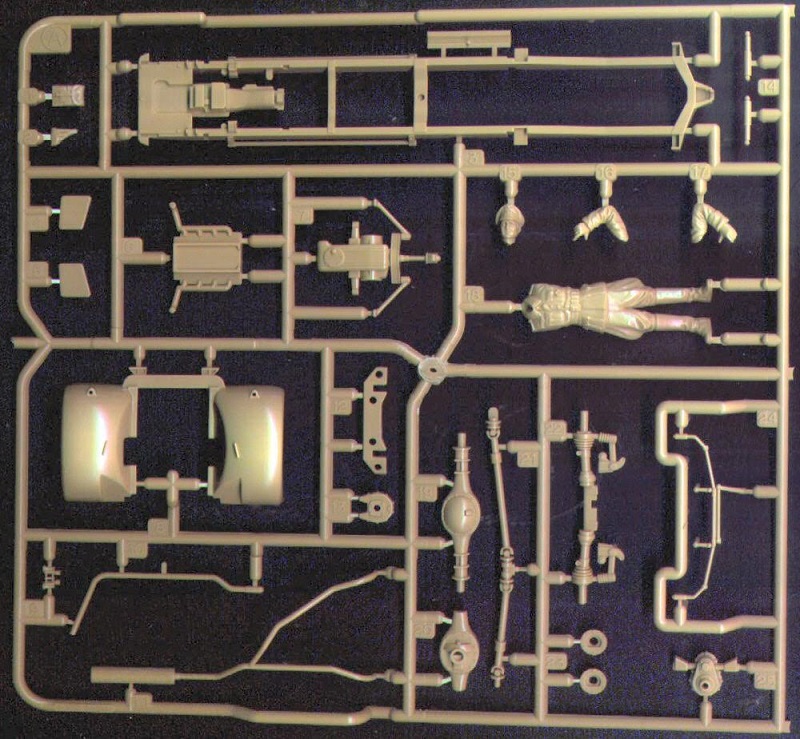 Parts tree, letter B, holds: 5 tires and rims (one is a spare that goes into the trunk, which can be displayed open or shut), the steering wheel, some tow hooks, a Jerry can, leaf springs, a jack, shift levers, Notek and head lights, grille bars molded to the front bumper part and a seated figure. This figure is divided into separate torso, arms, legs and head. (74 parts).

There are no letter C or D parts trees. 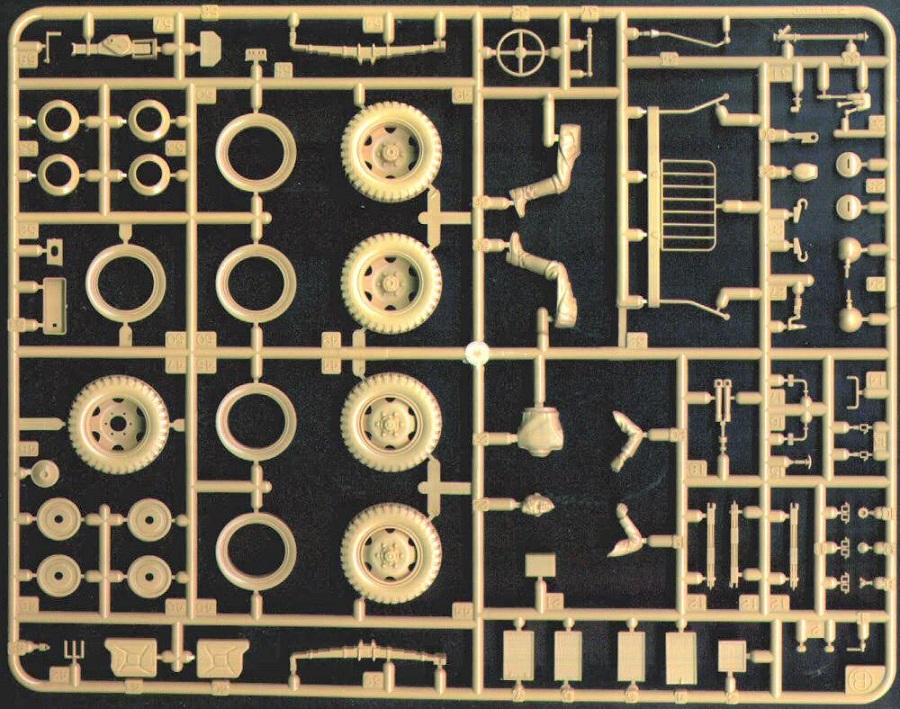 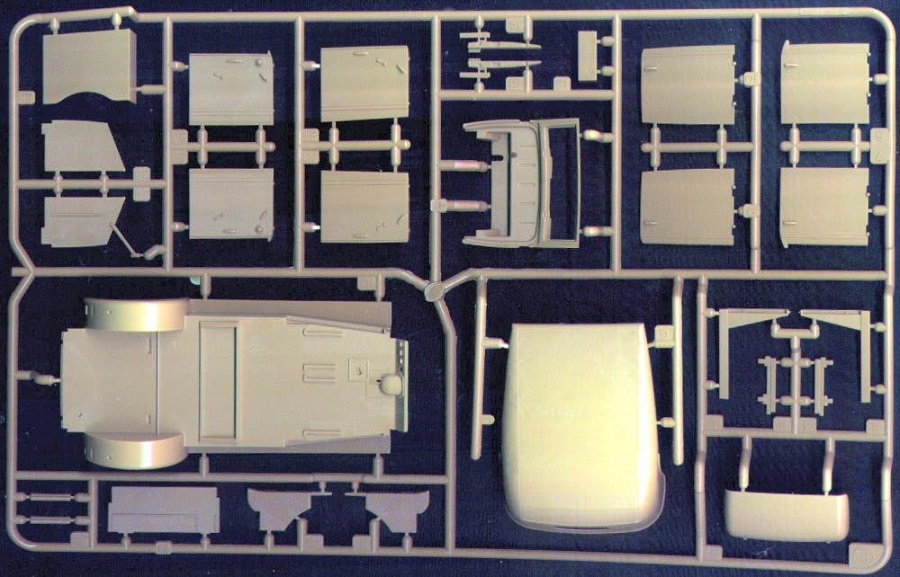 Letter F parts tree holds: the seats, another Jerry can, dash board, inside door panels, fender pennants, another seated figure (I believe this one is the driver) etc. This 3rd, and last figure, is divided into separate torso, arms, lower body and head. (34 parts). 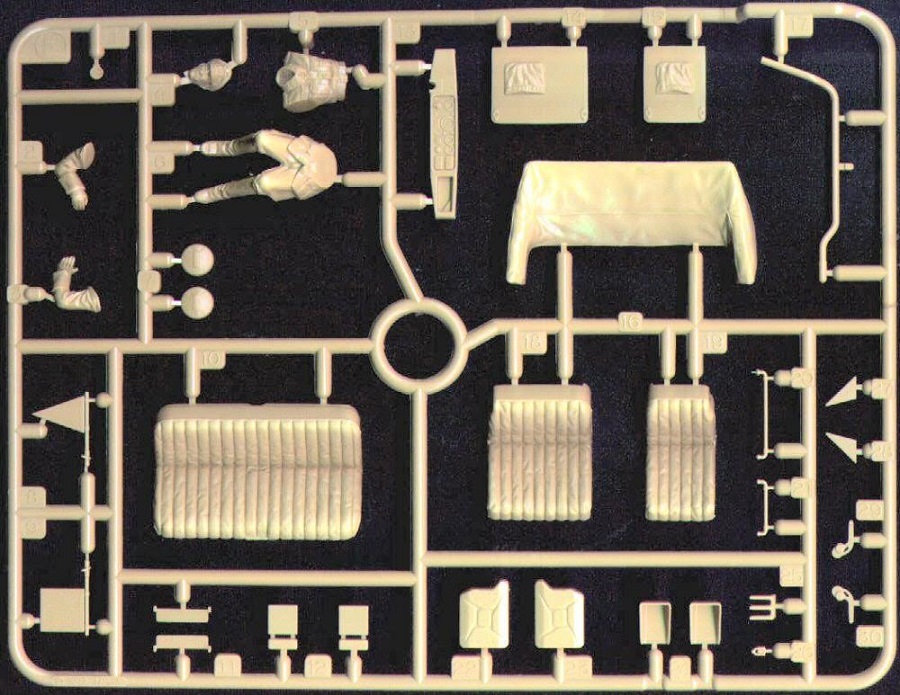 ​Then we have the clear parts tree of window transparencies. (6 parts). There are no clear head light lenses, only slited black-out covers are provided for the lamps. 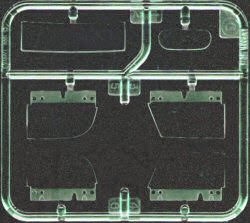 ​Next are the individual hood and rear body panel parts.

​Finally, are the small decal sheet, 4 black poly-caps (to hold the wheels on), an the square of black screen material (to put into the grille and side air intakes). 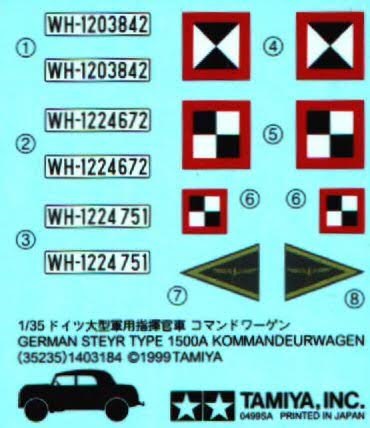 ​This is a nicely detailed kit. with engine detail and figures.

I intend to add a set of M.V. Products light lenses, set no. L248 to this model and also Arher Dry Transfer set no. AR35214 of German instrument faces and their set no. AR35215 of German data placards. Also, Eduard issued a PE set no. 35196 that is specifically for this Steyr kit. Lots of stuff to dolly the kit up with.

For the figures I have the Archer set no. G35042 of German uniform insignia.

I purchased my kit at my local hobby shop years ago. It has a copyright date of 1999.

Since I wrote this review I have built most of the kit. Here are some in progress photos. 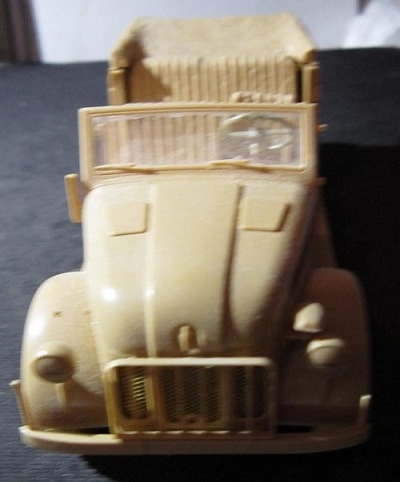 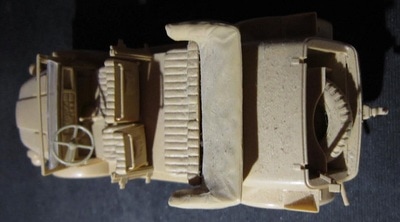 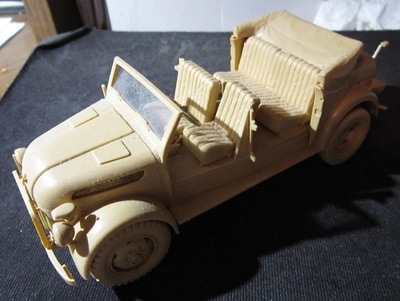