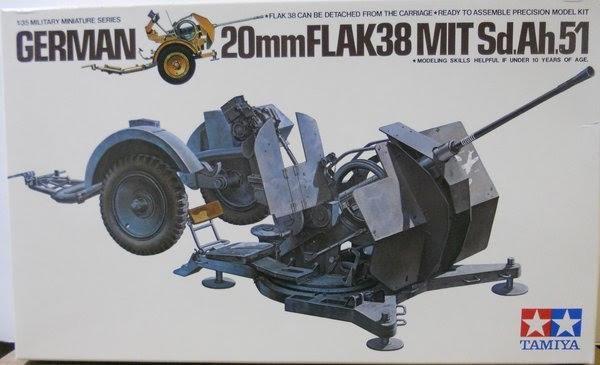 Kit no. MM202
By Ray Mehlberger

The Flugabwehrkanone 30 and improved Flak 38 were 20 mm Anti-aircraft guns used by various German forces throughout World War II. It was not only the primary German light anti-aircraft gun, but by far the most numerously produced German artillery piece throughout the war.
It was produced in a variety of models, notably the <B>Flakvierling 38 which combined four Flak 38 Autocannons onto a single carriage.

This kit came in a shrink-wrapped end-opening type box. I am no fan of this type of box, because invariably parts of the decal sheet will find their way past one of the end flaps to become lost forever. Give me a tray and lid type box any day of the week.

The box art shows a Flak 38 sitting to the side off its Sd.Ah 51 two-wheeled trailer. They both are in overall Panzer grey. The Flak 38 has white kill rings around the barrel and white silhouettes of aircraft on the front of the shield that are further victory marks.

One side panel shows a Krupp Protze truck pulling a Flak 38. Both are in overall earth  yellow. This is followed by a one-paragraph history of the gun and a list of the kits features.

The other side panel shows 3 color box arts of other artillery models that Tamiya markets: a German 37 mm anti-tank gun with crew, a German 88 mm Flak 36/37 with crew and a German 20 mm Flakverling 38.

The bottom of the box shows three 2-views of the Flak 38.

The first one is off the trailer and is the box art subject (already described above).

The second one shows the Flak 38 on the trailer as a above view and a head on view. It is overall earth yellow.

The third one is the Flak 38 on the trailer. It is overall Panzer grey with a heavy coat of winter white-wash over it.

On the right side of the bottom there is a Flak 38 shown mounted in a Horch Type 1a field car, in overall earth yellow.

A Flak 38 mounted on a Krupp Protze truck, in overall Panzer Grey.
​WHAT'S IN THE BOX:

This kit holds 2 dark grey trees and the decal sheet in a sealed cello bag and the instructions.
The instructions consist of a single sheet that is printed on both sides in 17" x 7 1/2" page format, folded twice to fit the box.

The face side of the instruction sheet begins with a black and white photo of the Flak 38 sitting off its trailer. It is overall Panzer grey and appears to be a photo of the model made up.

Below this is the history of the Flak 38 and the first 2 assembly steps. There is an illustration of a Flakpanzer IV Mobelwagen, a Gulaschkanone (German horse-drawn field kitchen trailer) and a Krupp Protze truck that are other AFV kits that Tamiya markets.

The reverse side of the instruction sheet continues with a grand total of 6 assembly steps with a black and white photo of the kit made up and parts trees illustrations. 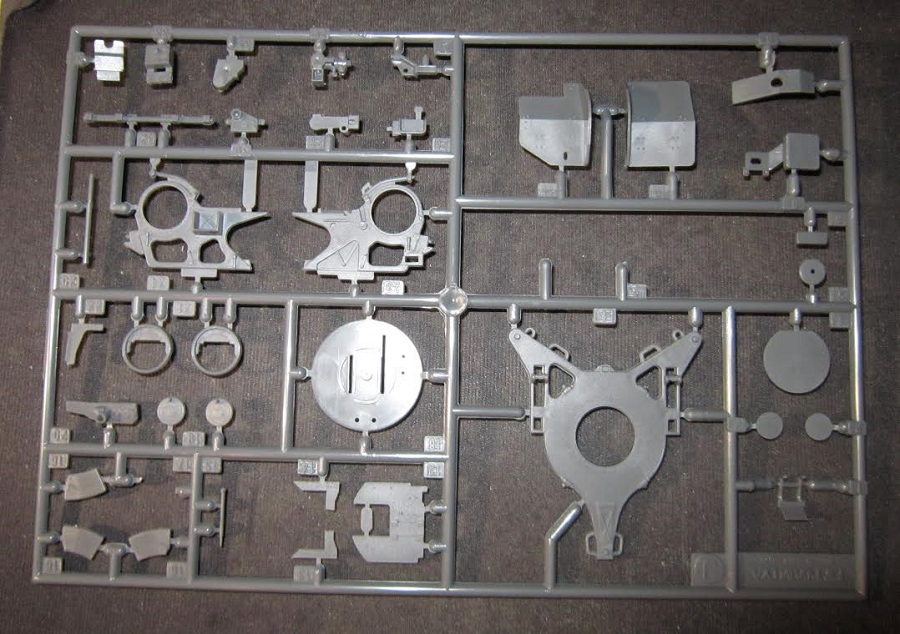 ​The decal sheet completes the kits contents of parts. It holds the two types of white victory markings and a white palm tree with swastika (Afrika Korps Div.) marking on a green shield.
No crew figures are included in the kit. 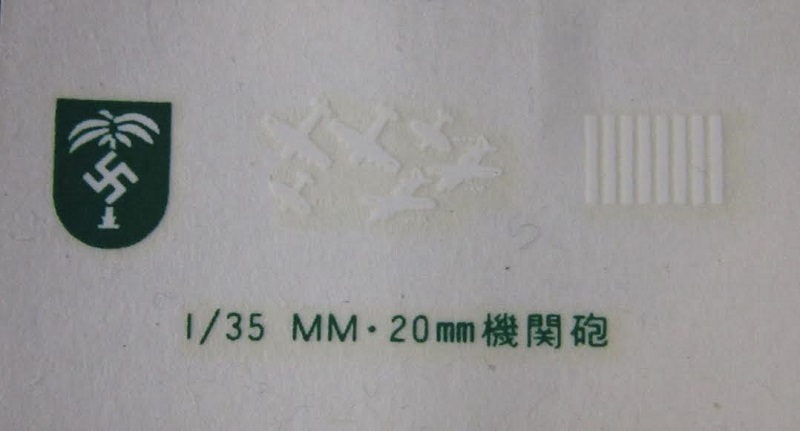 The color kit catalog completes the kits contents.
This is a neat kit of a German anti-aircraft gun. Only wish there had been some figures included.
I purchased my kit at a local hobby shop years ago that went out of business.