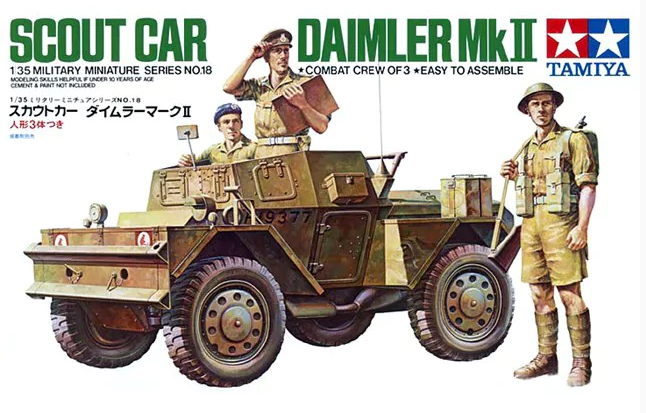 Kit no. MM118
By Ray Mehlberger

Tanks appeared first in WWI as an epoch-making new weapon. In the course of time, effective anti-tank weapons were produced one after another by powers of the world.

In the mid-1930's, anti-tank guns for infantry were developed. These were effective measures especially against light tanks at that time.

When fighting against tanks, infantry of those days generally adopted tactics of building a road-block and shooting and stopping a tank approaching at the lead of a tank corps to keep following tanks from advancing.

It was the Scout Car that the British Army developed for the main purpose of defending tank corps from such attacks. The main duty that the Scout Car was supposed to do was to get along the expected road of advance far ahead of the tank corps and when finding an enemy road-block, move back at high speed to warn the tank corps of it.

some armor protection of the hull, satisfactory reverse speed and complete maneuverability , and four-wheel drive system in view of mobility on rough roads  were required  to realize the basic plan.

The development  was started in about 1937 and the first design was submitted by Riley Car Co., which was well known as a motorcar manufacturer. A mock-up was made on the basis of the design at the Army Proving Ground.

After various tests made there, it was decided  that the crew should be two, armor plates should be added also to the sides and the rear, and the driver's seat should be fixed slanted forward the inside. so that the driver could easily look back.

Manufacturing permit was granted to Riley Car, but this company had already become bankrupt. Instead, Alvis Ltd. was requested to make a prototype, called DINGO was completed in March 1938. It was a very small vehicle which mounted a Alvis four-cylinder, 12 hp engine on the rear and had excellent climbing ability.

About the same time when the Alvis prototype was completed, a directer of B.S.A., manufacturer of motorcycles and front drive cars, visited the War Office. He made an offer to design a new reconnaissance car, which was to compete withe the Alvis Dingo.

A B.S.A. prototype was completed as early as September 1938. It mounted a 2.5 L engine which was used for the Daimler limousine, a high-class car of those days, and employed wish-bone type independent suspension with coiled springs for each wheel.

The gear box was a special one and the reverse gear had the same gear ratio as the forward gear. The vehicle could move both forward and backward at a maximum speed of about 90 km/h. To make the most of the reverse speed, steering mechanism which could be controlled by a single steering wheel was employed for the front and rear wheels.

The driver's seat was fixed aslant toward the inside in the same way as the Alvis Dingo, so that the driver could easily look back.  Thus, the B.S.A. prototype could move backward at the same speed and with the same maneuverability as when moving forward.

It is needless to say how this point was important considering the original use of the Scout Car. Comparative tests between the B.S.A. prototype and the Alvis Dingo were made at the end of 1938 to January of 1939.

The former was officially designated Car Scout Mk. I and the first mass production order for 52 was placed with B.S.A.  Subsequently, B.S.A. was merged with Daimler and the official designation was changed  to Car Scout Daimler Mk. I.

The increase in weight had an evil effect on the performance and especially the rear steering became very difficult to control.

At the beginning of 1940, the first mass production vehicle was completed in April of that year. The Daimler Scout Car was delivered  to the 50th Motorcar Division and first saw battle in France.

The Daimler Scout Car developed into the Mk. II and the Mk. III. The Scout Car was recognized as a really effective vehicle for reconnaissance and communication on the battlefield.

As mentioned above, the addition of equipment made it very difficult to control the rear steering on the Daimler Scout Car. In about 1941, it joined battle  in North African deserts, where the rear steering mechanism was not much needed and was not employed in the Mk. II or the Mk. III.

The Mk. III which appeared at the beginning of 1945, had a commander's seat called "jury seat" at the rear of the fighting equipment compartment and the roof was made of canvas. The Mk. III was made water-proof for the first time and screws fastening the front sand channel were replaced with larger ones. The later Mk. III was equipped with smoke-shell dischargers.

The Daimler Scout Cars Mk. I thru III were used by all corps including engineer, artillery, as well as infantry and tank corps and showed activity in all battlefields until the end of the war. They are still active also after the British operations such as Korea, Malaya, Cyprus, Germany and Egypt. The total production of Mk.I's to Mk. III's during WWII reached 6.626.

The box art shows the Daimler Mk. II and it's crew posed against one of Tamiya's signature all-white backgrounds that they use for the majority of their box arts.

The car is overall dark-green with a symbol of a red square with a white circle with a black jerboa on it on each side of the nose and a serial no. F19377 on it's sides.

The men are all in khaki uniforms, with short sleeves. The driver and commander are in the car. The driver wears a black beret with goggles strung over it. The commander wears a grey peaked hat. He is holding a clip-board under his left arm and is shading his eyes with his right hand.

An infantryman is standing next to the car. He wears short pants with putties over low brown shoes. He wears a steel helmet and 2 canvas cases strung over his shoulders, with a rifle slung over his right shoulder.

One side panel has 3 color box arts of other AFV kits that Tamiya manufactures: a German 88 mm FLAK gun 36.37, a German Pz.Kpfw. II and a U.S. Willys Jeep MB.

No kit numbers for these 3 is provided. I assume they are all to 1/35th scale. Kit was made in Japan and Model Rectifier's address in Edison N.J. is provided.

They were the U.S. importer and distributor of Tamiya kits at the time this kit was released.

​The other side panel begins with a small color repeat of the box art, followed by a one-paragraph history of the car and features of the kit: Authentic copy of interior details, steering wheel moves front wheels to left and right, front and rear wheels equipped with special plastic suspension, three figures included - driver - infantryman in car- and standing infantryman.

Followed by a side view of the Scout Car in green with black spots.

The kit holds 3 tan trees and the decal sheet in 2 stapled-shut clear cello bags, the instructions and a color kit catalog.

The instructions consists of a single-sheet that is printed on both sides in 22" x 8 1/2" format, folded 3 times to fit the box.

The face side begins with a black and white wartime photo of the car being followed by a Grant tank. The car is in the box art scheme. This is above the history and specifications of the car, painting and decal application instructions and instructions for painting the figures.

A 4-view is shown of the car with the serial no. F19377 on its sides, but with a choice of 4 different unit markings to choose from. Plus the car is green with black blotches on it. This camouflage is named "Mickey Mouse".

The reverse side of the instructions down it's left column has READ BEFORE COMMENCING ASSEMBLY instructions, over 2 parts trees illustrations for the car and figure assembly instructions.

The right side column has 9 assembly steps for the car.

Trees are not alphabetized. They do. however, have part number tabs next to the parts on the trees. Bad move Tamiya! 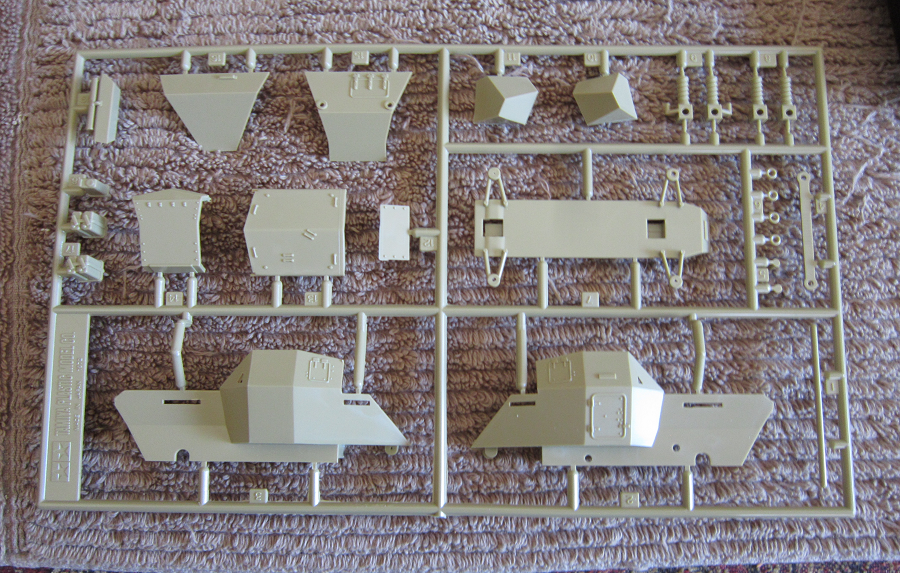 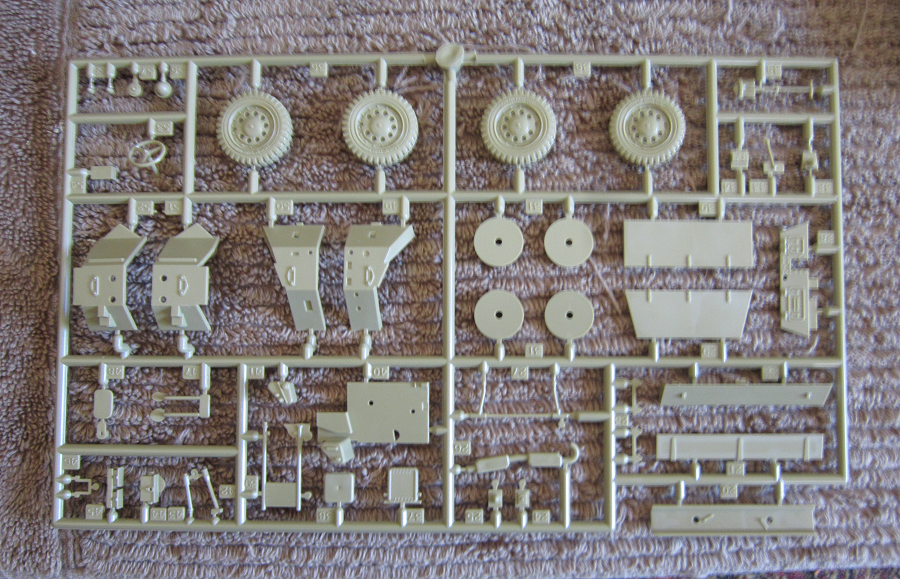 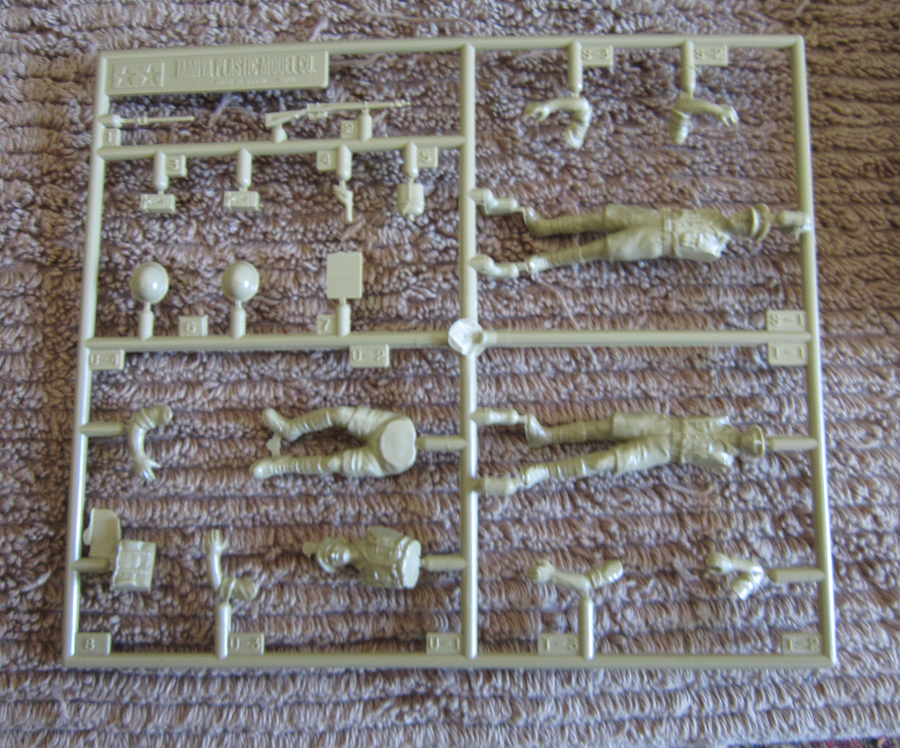 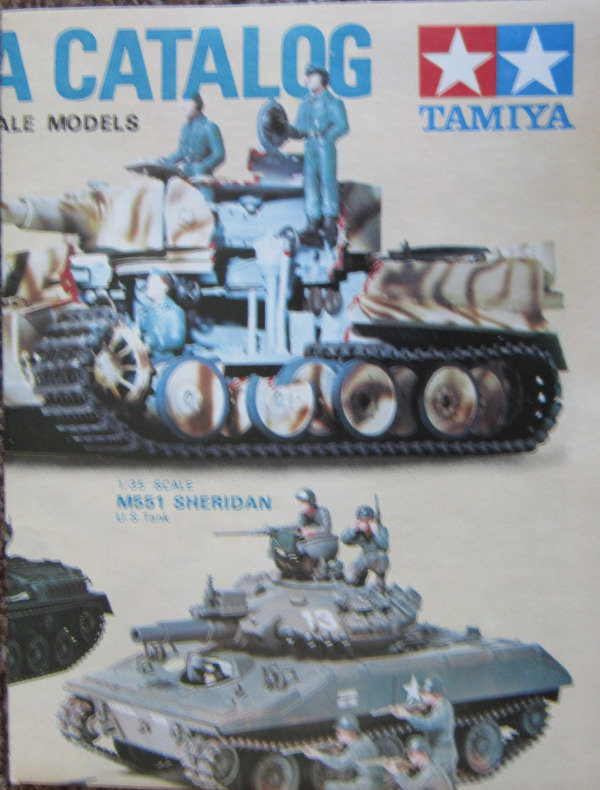 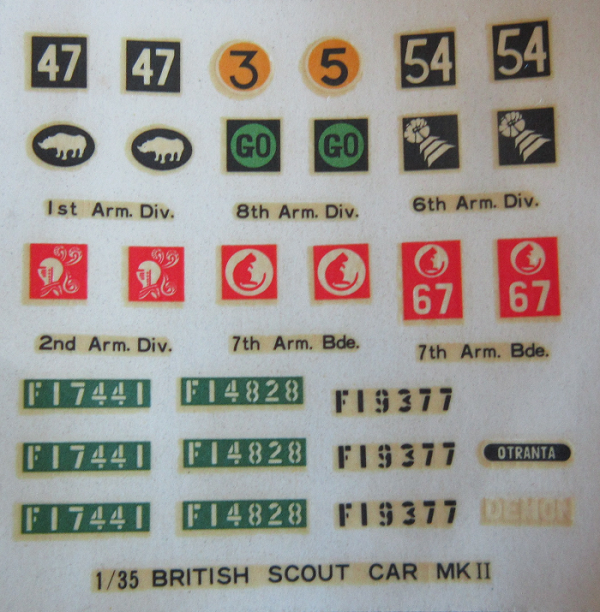