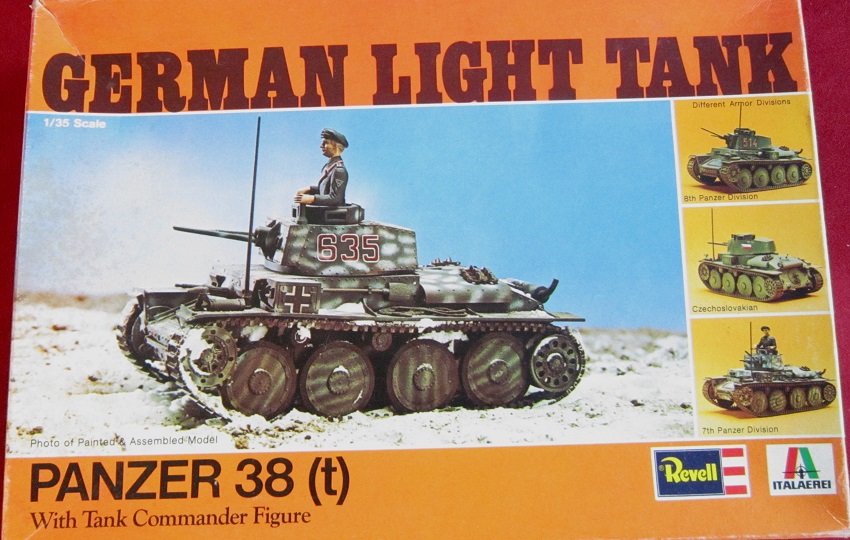 Revell and Italaerei (now spelled Italeri) are both prolific model companies that make all manner of different model subjects in the popular scales. Revell has facilities in both the U.S. and Germany. Italeri is based in Italy.

This kit came in a shrink-wrapped tray and lid box. The box art has a color photo of the model made up on a snow-covered diorama base. The tank is in a base of Panzer grey with dark green stripes and some spots of winter white-wash. It has the turret number of 635 in red with white outline on the turret sides. A black German cross outlined in white is on the hull sides. A commander figure in a black Panzer uniform with a barret on his head stands in the turret hatch.

The 2 panels have 8 walk-around color photos of the kit made up. The first photo is of the model done in overall olive green with Czech insignia. The second and third photo show the side and rear deck of the box art subject. The fourth and fifth photo show the model in overall Panzer grey with thin back German cross outlined in white on the sides of the hull and the turret number 514 in red with white outline. The photos show the side and turret top of this one. Below these photos is detail descriptions:


One side panel has the history of the 38(t), the copyright of the kit as being 1976 and Revell’s city as being Venice, CA. The box was printed in the USA. The kit is intended for modelers over 12 years of age. A list of paint colors is suggested to use to finish the model,. Paint and cement are not included in the kit.


This kit contains 3 grey parts trees, black vinyl treads, the decal sheet, the instructions and a form to use to join the Revell Master Modelers Club.

The instructions consist of an unbound booklet of 8 pages in 9” x 12” page format, printed in blue ink.

Page 1 of the instructions begins with the history of the 38(t), followed by 5 illustrations showing how to use hobby tools, HELPFUL MODELING HINTS, a list of colors that show their FS numbers (Federal Standard) and the address of the General Services Administration in Washington D.C,. where you can order a copy of the FS color list.

Page 3 to page 7 have 6 assembly steps. All the steps have text in them telling you how to proceed in those steps.

Page 8 has three 3-views for marking and painting schemes. One is overall Panzer grey. The second one is a base of Panzer grey with narrow dark green stripes. The third is overall olive green and is obviously indicating the Czech one. Letters of the alphabet point to sections of these illustrations, meaning what marks go there.

There are two types of German crosses. Both are black with white outlines, but three are wide and  three are narrow.

Step 5 is for assembly of the tank commander figure and painting him.

There are seats for the driver and gunner and a rear wall for their compartment, but no other details there or any in the turret interior. The main gun and machine guns have no breeches.

One buck and the application form in the kit will get you a membership in Revell’s Master Modelers Club, a pair of tweezers, a spatula with 2 blade sizes for applying putty, needle-nose cement applicator, a set of clamps for holding parts, official club membership certificate, a Revell kit catalog with a section on how to assemble, paint and detail models and a full year’s subscription to the Master Modelers Club News, a quarterly publication.

This is surely a lot of bang for your buck back in the 70’s!! 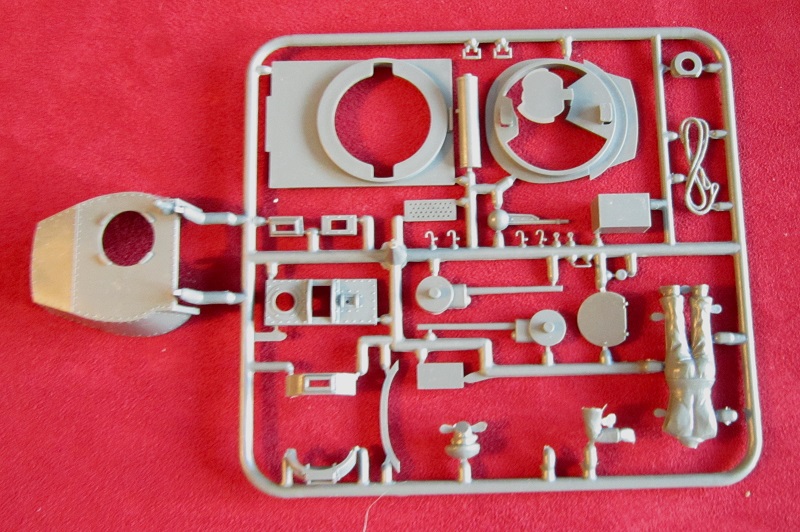 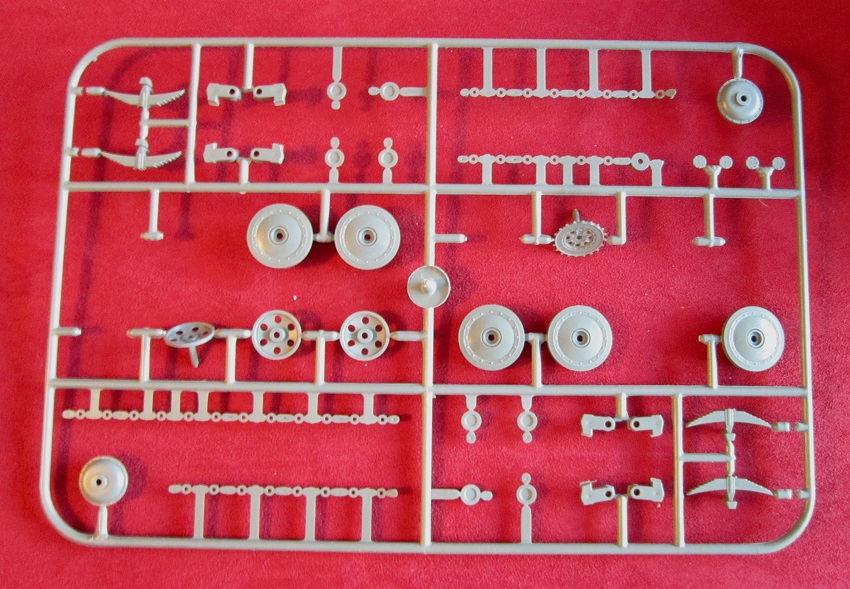 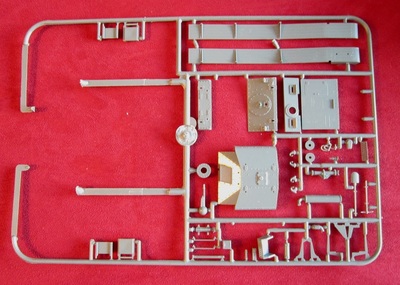 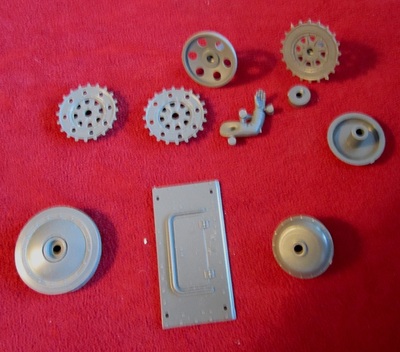 None of the trees are in cello bags and the rubbing between them had knocked off some parts.

The black vinyl treads are next. There are 2 long runs and 5 short spare sections. These are the old type that need to be hot riveted into loops and not the glueable type sold today.

The decal sheet (already described above), the instructions and the club application blank complete the kit’s contents. 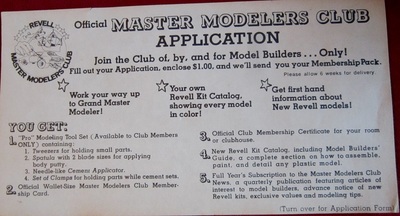 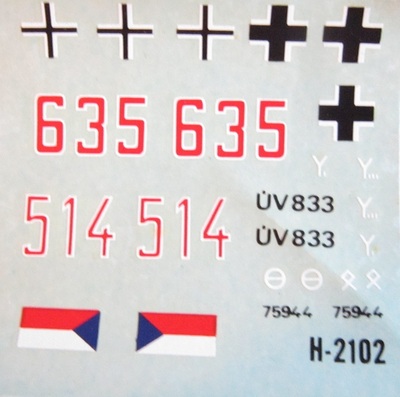 I got this kit willed to me by a modeling friend who died of cancer years ago.

He was fabricating some kind of different hull out of grey plastic card stock. For what purpose I haven’t a clue??

This kit has been released several times over the years since it first came out in the 1960’s by Italeri.  It’s last  re-release was as kit no. 6489 and called out as a Ausf. F. It is available from Sprue Bros. on web store (the company that bought out Greatmodels).

I bought a set of individual links and road wheels by DML Dragon (kit no. 3813). It contains 5 grey trees that have 2 road wheels and 56 individual track links on each. 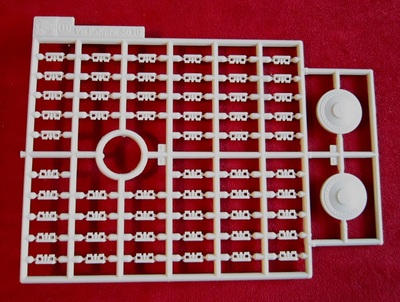 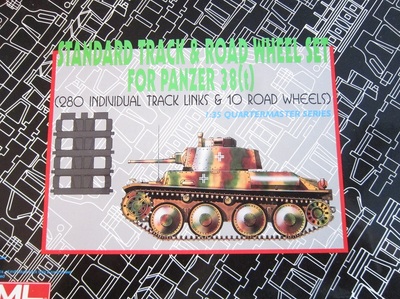 I don’t think the road wheels are any better than what is in the Revell/Italeri kit, but the individual links will sure be an improvement over the rubber band ones.

Only a small sheet is inside showing you how to snap the links together for instructions. I don’t remember what I paid for this set.

I recommend it to modelers of average building skills.