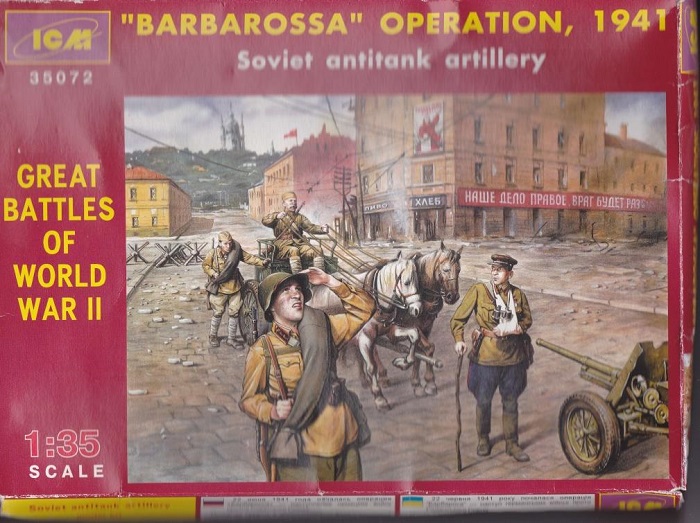 ICM is a model company based in the Ukraine.

The kit comes in an end-opening type box. I am no fan of this type of box, as parts tend to find their way past the end flaps and become lost forever. Give me a tray and lid type box any day of the week. Also the box on this kit is made from flimsy cardboard and became very crushed in a stack of my other kits.

At first glance, the box art might make one believe this is solely a figure kit. However, it also contains a 45mm anti-tank gun. The box art shows a horse-drawn ammo limber moving through a Soviet city, accompanied by 2 soldiers and an officer on foot.The limber is being towed by 2 horses. The infantrymen carry full field gear and rifles. One wears a steel helmet and the other wears a cloth side cap. The limber driver also wears a cloth side cap. The officer appears wounded and has his left arm in a sling. He walks with a walking stick and has a pair of binoculars around his neck. All the figures wear low shoes and putties.

In the lower right corner of the box art is an illustration of ½ of the 45mm anti-tank gun.

The box art says the kit is one of ICM’s “Great Battles of World War II” series of kits.

One side panel has the history of the  45mm in Ukrainian and Russian, marked with full color flags of Russia and the Ukraine. “Made in Ukraine” is said here too.

The other side panel continues with the history in English, German and Czech, with full color flags of the UK, Germany and Czech Republic marking them.

The back of the box serves as a full color painting and assembly instructions. Parts are indicated in black letters of the alphabetical designation of the trees they are on and their part numbers. The colors are designated in blue alphabet letters in blue squares. These will have to be looked up on the color listings on the instructions in the kit. 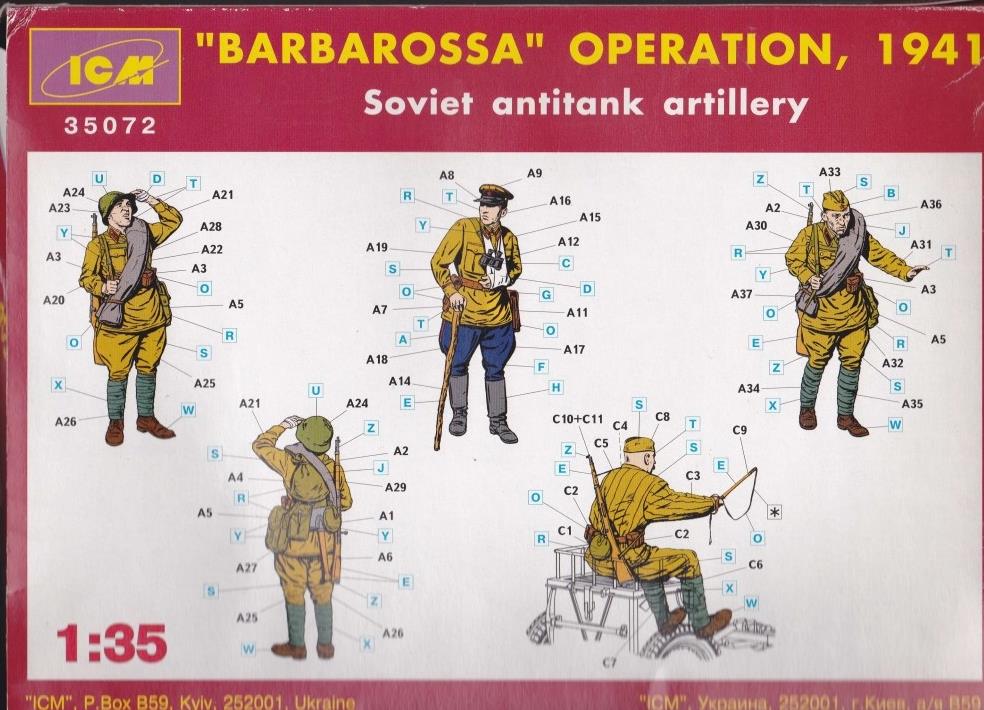 ICM’s P.O. box address in the Ukraine appears below these illustrations in English and Ukrainian.

What’s in the Kit:

There are 2 instructions in the kit.

One instructions consists of a single sheet that accordion-folds out into 6 pages. This instructions is for assembly of the horses and their gear and the 2-wheeled ammo limber.

Page 1 of this instructions begins with the parts tree illustrations, followed by a color guide of various field equipment which illustrate belts, tote bags, shovels in pouches, canteens, a pistol holster, rifle ammo cases, a cloth side cap and an officer’s hat.

Pages 2 through 5 give a total of 13 assembly steps.

Steps 1 to 4 are for the horses and their gear.

Steps 5 to 13 are for the 2-wheeled ammo limber. There are alternate wheels provided, either spoked or solid rims.

Page 6 has the paint list of colors calling out Testors or Humbrol brands in English, German, Ukrainian and Czech, followed by “Cautions” in these languages. ICM’s P.O. box adderess again appears along with their e-mail and web site addresses.

The second instructions is a single sheet printed on both sides. This is for assembly of the 75mm anti-tank gun.

One side begins with a parts tree illustration. This has a full listing either side of it that tells the names of all the parts in English and Ukrainian. Below it is a paint color listing again of Testors and Humbol brand colors and the “Cautions” and addresses like on the previous instructions in the 4 languages.

On the other side are 4 assembly steps. Alternate wheels are provided for the 45mm like the limber….spoked or solid rims. A spent ammo round and 4 live ones are shown in step 4.

Very pale gray tree letter A holds: the 2 waling infantrymen’s parts and the parts of the walking officer. They are all divided into separate heads, hats (or helmet), torsos, arms and legs, 2 rifles and their field gear are here too. (46 parts) 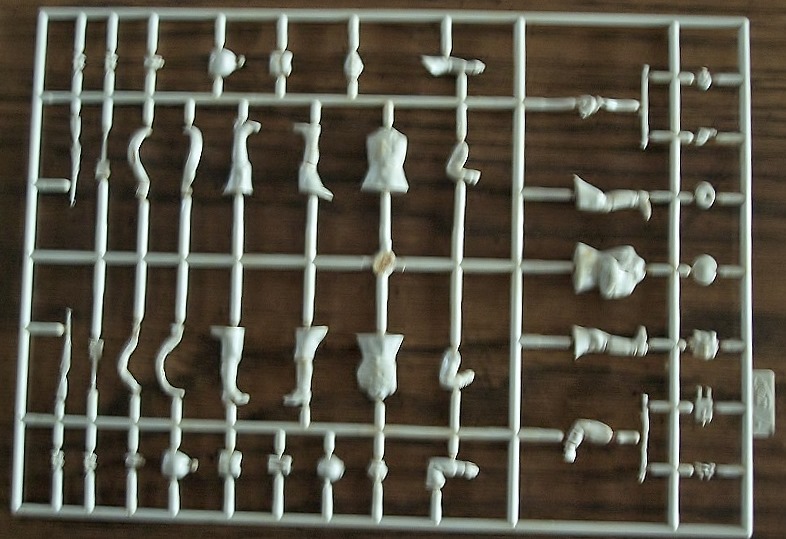 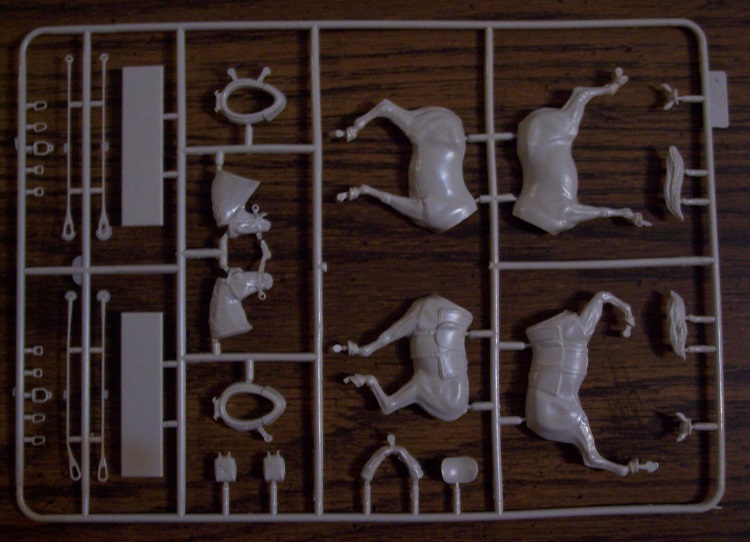 Very pale gray tree letter C holds: the ammo limber parts, alternate wheels, the driver figure and his rifle. He is divided the same as the other figures. (53 parts) 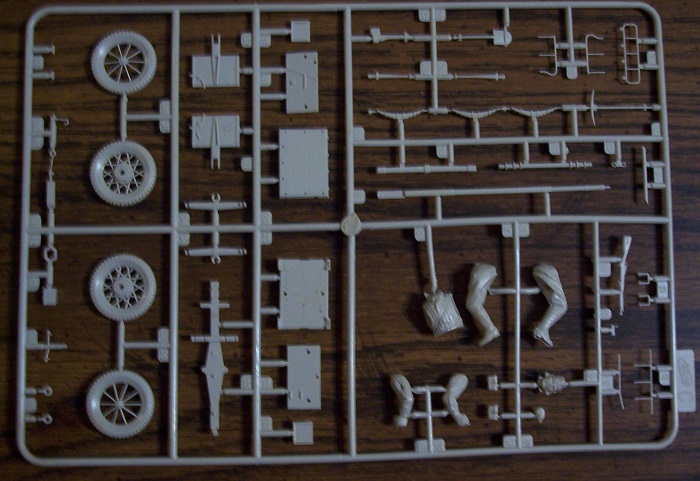 The dark green parts tree is not alphabetized and being the lone tree for the 45mm I supposed does not need to be. It is part numbered though. It holds all the 45mm anti-tank gun parts, alternate wheels, 2 wood ammo cases consisting of 6 parts each and 18 live and 6 spent 45mm ammo rounds. (75 parts) 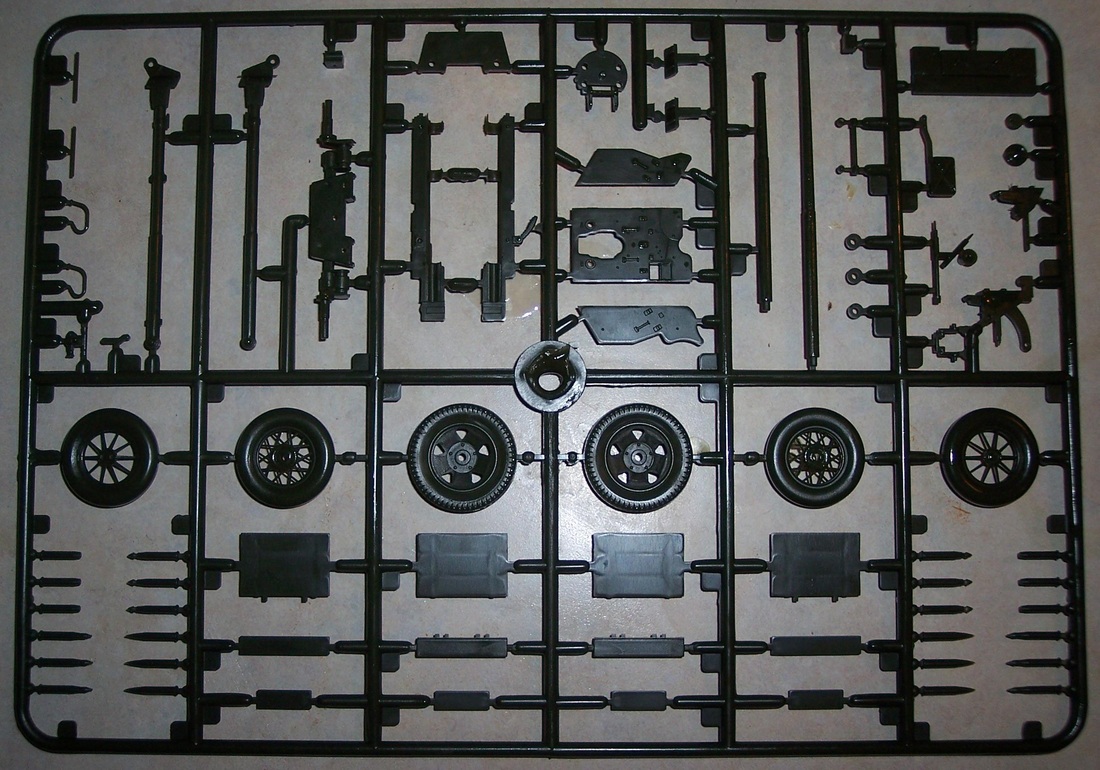 There are no decals in the kit as it really does not need any.

This kit will make up into a very neat diorama.

However, one will have to also purchase a Soviet gun crew if he wants to show the gun manned. The figure poses in the kit do not lend themselves to look like a gun crew.

The gun is not all that complex, But putting all the reins and straps on the horses will be a chore to get right. Some things are marked with a 6 pointed star, meaning to fabricate them. This is some of the reins and the whip that the limber driver holds. I think modelers of average skills will not have too much problem with this kit. However, I have built only one other ICM kit and found that one to be of very brittle plastic that took light-hands to remove parts from the trees and assemble them. I don’t know what to expect in that respect with this kit, but have been forewarned. Highly recommended otherwise.

I purchased my kit from a store that went out of business.