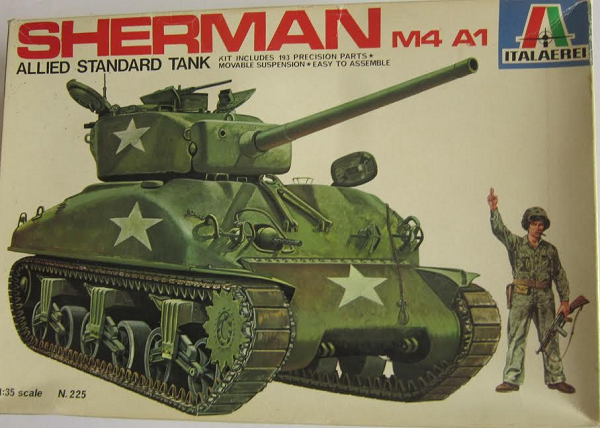 Kit no. N225
By Ray Mehlberger

In 1941, after the German attack on Russia, it became clear to the United States that possibility of an American involvement in the war was becoming more and more inevitable.

For thi reason, President Roosevelt ordered substantial production increases of the medium tank M4. The tank was not a completely new model, since it derived from the previous model M3 "Grant". The Sherman had some major improvements on the superstructure and on the armament as well as on the welded or cast hull.

The "General Sherman", under which name the new tank was soon to be known, was equipped with a 75mm gun, which was, however, insufficient against German tanks. This necessitated a series of changes, including a completely new turret as well as a 76mm gun, which would be more efficient than the previous one.

The new prototype was given the designation M4A1. In January 1944, the new type was introduced. Until the end of the war,k about 3,400 pieces were produced. Not withstanding the improvements, there were still many defects. One of them being the lack of protection.

Frequently, the crew was forced to protect the taml sodes amd tje front with sand bags. In some instances the most exposed track sections were covered and sometimes even cement or steel blocks were attached.

Thanks to its numerical superiority, the tank was able to match the German tanks, using its great maneouverability and its excellent 76mm gun.

The M4A1 took part in the invasion of Normandy and in all European theatres.

Italaerei (these days spelled Italeri) is an old prolific model company based in Italy. They manufacture all manner of model subjects in the popular scales.

This kit came in a taped-shut tray and lid type box.

The box art shows a M4A1 posed agains an all-white background, similar to how Tamiya does the majority of their box arts also.

It is overall olive-drab with white stars on the sides of the turret, hull sides and nose. There is a U.S. infantryman standing in front of it with his right arm raised. He is wearing a steel helmet with a cloth camouflaged cover on it. He is smoking a cigar and is holding a Thompson sub-machine gun in his left hand.

The box art says the kit holds 193 precision parts, has a movable suspension and is easy to assemble.

One side panel has a one-paragraph history of the M4A1 in French, English and Italian each marked with color illustrations of the flag of the country that speaks those languages, followed by color box arts of other AFV kits that Italeri manufactures: kit no. 216, a German Opel Blitz 3 (t)S. Type truck and kit no. 212, a German Pz.Kpfw. 38(t) tank.

The instructions consist of a single-sheet that accordion-folds out into 8 pages in 6" x 11 1/2" page format.

Page 1 begins with a black and white photo of the model made up in the box art scheme, over the history of the M4A1 in the 3 languages.

Page 2 begins with ATTENTION - USEFUL ADVICE in Italian, English, German and French, over the parts trees illustrations of trees circle and triangle.

Trees are not alphabetized. They are instead labeled with geometric symbols - a circle, triangle and square.

Page 3 has a illustration of tree square, over the first 2 assembly steps.

Page 4 through page 6 give a grand total of 9 assembly steps.

Page 7 is the painting and marking instructions. It show a large 3-view of an olive-drab M4A1 with white stars on the turret and hull sides and rear and with a white circled star on the nose and white V11741 triangle on the left side of the rear and A7 on the right. It has white AL CAPONE on its side followed by U.S. ARMY over ser. no. 30419403.

A M4A1 in overall olive-drab with white stars on the turret and hull sides and the nose. It has white BONNIE over B15 on the hull sides, with USA over ser. no. 3039762. It has a white 10 triangle 11 triangle on the left side of the front and rear and white B15 on the right. It is with the 10th Armoured Division, 11th Tank Battalion, Company B vehicle 15, Ardennes 1945.

The bottom of page 7 has assembly instructions for the figure.

The bottom of page 8 has a black and white photo of the model made up over its history in French. 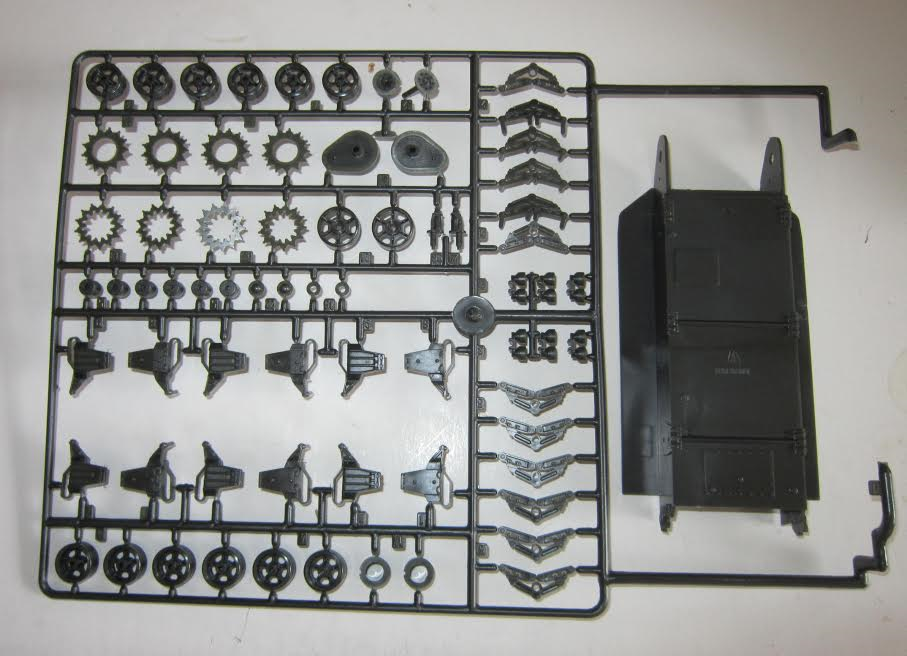 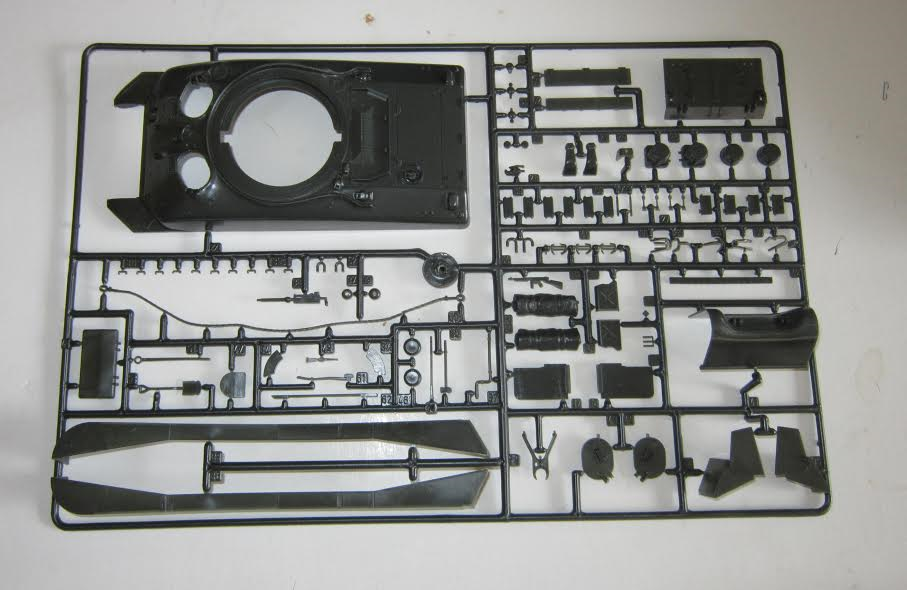 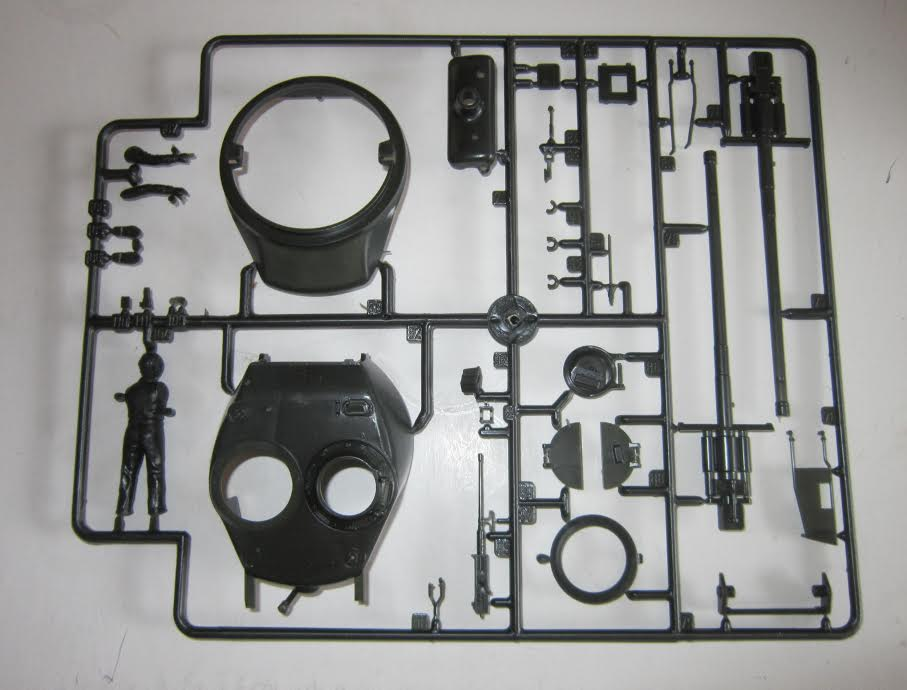 The decal sheet as described above. 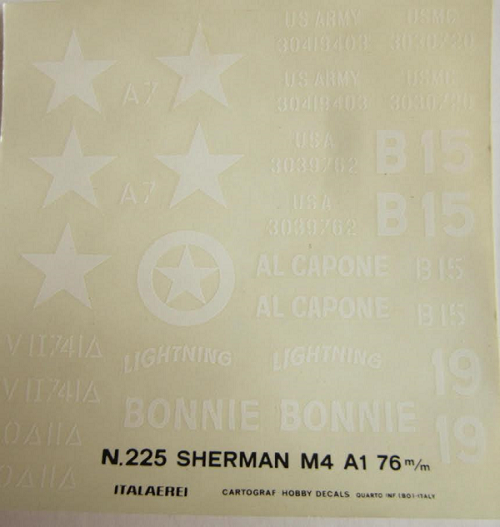 ​
The 2 lengths of black vinyl tracks and the decal sheet complete the kits contents.

Only the turret has detail of the gun breech in it. There is no details inside the hull.

The decal is printed white on white and the lettering will not appear in a photo...sorry.

The kit has nice external detail though.
​Recommended.