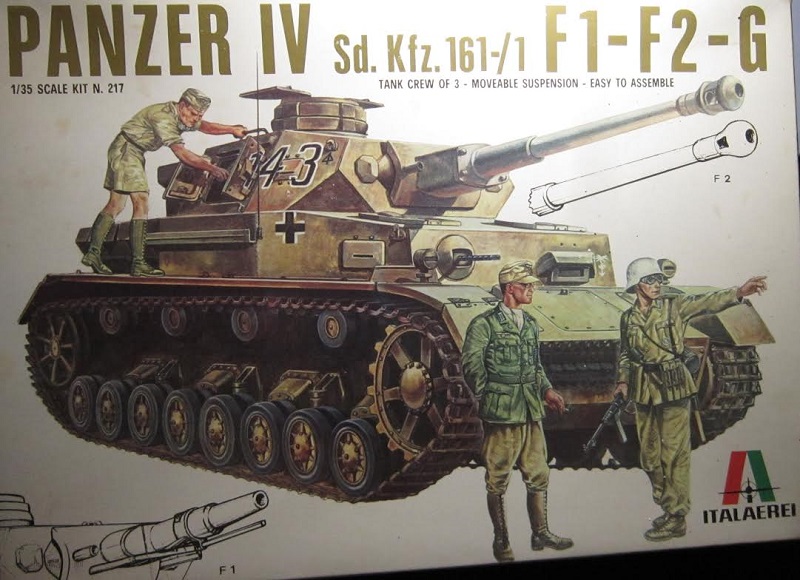 Of all the tanks produced by the Germans the Pz.Kpfw. IV F-2 - G is one of the best known and most widely used armoured fighting vehicles. However, in February 1943 its productin was about to be discontinued in order to make room for the Tiger tank, and only because of the determined intervention of General Guderian was the production continued.

Otherwise the Wehrmacht would have been deprived of one of the most powerful and versatile weapons of WWII. It was first produced in 1934 because of the need to have a tank available to support the standard type III. The actual production was started in 1936 by Krupp, and by the end of the war about 9,000 units had been produced from ten different versions. The vehicle was improved greatly and made more powerful.

The earlier types were called A-B-C-D-E-F1, the last mentioned mounted a 75mm gun L24 with a short barrel. This kit contains the F-1 version with the short barrel and the F-2 & G versions, which were the first types that mounted a gun with a longer barrel.

The F-2 version was produced because of the need to face the more powerful new tanks and the specialised anti-tank weapons with which the enemies of Germany were equipped. After November 1941, the Panzer IV had a long barreled weapon and the type chosen was the 75L.43. This was installed during the first month of 1942 and permitted a lower angle of depression and also more rapid fire.

This version was called Ausfuhrung F-2 and was recognizable by the typical globe shaped muzzle brake of the gun. The type G mounted the same gun, now equipped with a double muzzle brake. This tank was in substance the result of all the improvements introduced in the preceding types.

The hull of the Panzer IV was made of welded plate construction and it was divided into three compartments. In the front was the driver and his controls, in the center the fighting compartment with the fuel tanks placed on the floor on either side, and at the rear the engine was situated This was a Maybach HL 120 TRM with a capacity of 11,867 litres.

The running gear consisted of 4 pairs of double wheels on each side, with solid rubber tires, each pair with a cantilever type suspension. There were four top rollers to support the track, and driving sprockets were at the front, the rearmost wheels being used for track tensioning.

At the begging of WWII during the operations in Czechoslovakia and Poland, the 4th Company of each Armoured Battalion was equipped with the Panzer IV. Subsequently, it became part of the heavy support company which was directly commanded from Battalion H.Q. From the time of the Barbarossa Campaign it was seen that the Panzer III was obsolete and most of the armoured batallions were subsequently equipped with the Model IV, which was gradually modified in its armour and fire power.

This tank distinguished itself in all the theatres of WWII, from Africa, where it was indeed a terrible enemy for the British, to Russia, where it gallantly face the more powerful tanks and anti-tank weapons of the Russian Army. Even as recently as 1956, the Panzer IV gave proof of its effectiveness when it was found to be fighting under Syrian colors during the short war against Israel.

Italaerei is an older prolific model company based in Italy. They make all manner of model subjects in the popular scales and have shortened their name over the years to Italeri.

The box art shows a Pz.Kpfw. IV G version with the long barreled gun with a double baffle. Posed against an all white background. Similar to how Tamiya does all their box arts against white backgrounds.

It is in overall earth yellow with a red turret number 143 outlined in white with a black 15th Panzer Div. mark to the right of it. A white Afrika Korps palm tree with swastika is on the right side of the front of the hull. A small German cross is on the sides of the hull.

There are 3 figures around the tank. One is standing on the fender and reaching into the side turret hatch. He wears a tan short sleeved shirt and shorts with brown high laced boots and a soft side cap.

A second figure stands in front of the tank talking to a third figure. He is wearing a soft peaked cap, a short jacket jodpher pants in tan and brown high laced boots. He has a cigarette in his left hand. The figure he is talking to wears a steel helmet, a tan short jacket and long pants tucked into low brown shoes. He carries a MP40 machine pistol and an ammo pouch for it on his belt. He is pointing with his left arm.

To the sides of this illustration there is a line drawing of the F! and F2 types of gun barrels.

One side panel has 4 color illustrations of other AFV kits that Italeri markets:

No kit numbers are supplied for these kits.

​The other side panel repeats the box art in color smaller, followed by a one-paragraph history of the tank in Italian and English.
​WHAT'S IN THE BOX:

The instructions consist of a single sheet that accordion-folds out into 8 pages in 6 3/4" x 13" page format.

Page 1 begins with a black and white photo of the model made up in the box art scheme. However, it has the turret numbers moved around to become 413 and not 143 as shown on the box art. 413 is how it is on the decal sheet. It is made up with the F1 type short barrel.
Below this photo is the history of the tank in Italian and English.

Page 2 begins with general instructions in 4 languages including English, the parts trees illustrations and 2 black and white close up photos of the treads and road wheels on an actual IV.

Page 3 to 5 give a grand total of 9 assembly steps.

Step 8 is for the G version.

Spread across pages 6 and 7 are three 3-views for painting and marking schemes.

The G version can also be marked with 2 other insignias.

A large black 4 followed by smaller black 08 with the 21st Panzer Div. as it's turret no.

A stenciled black 8 above a white 23 for the turret number, with the 15th Panzer Div.

Page 8 has 2 black and white photos of the model made up with the 444 turret number, followed by the history of the tank in German and French.

Part trees are not alphabetized, but parts are numbered. This will make for extra work to find the right parts for each assembly. 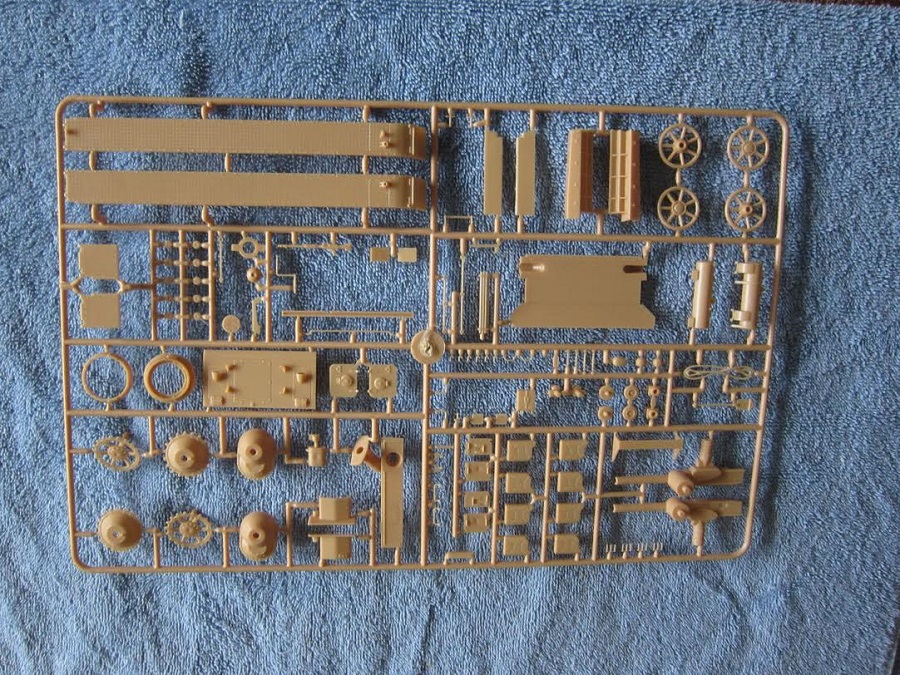 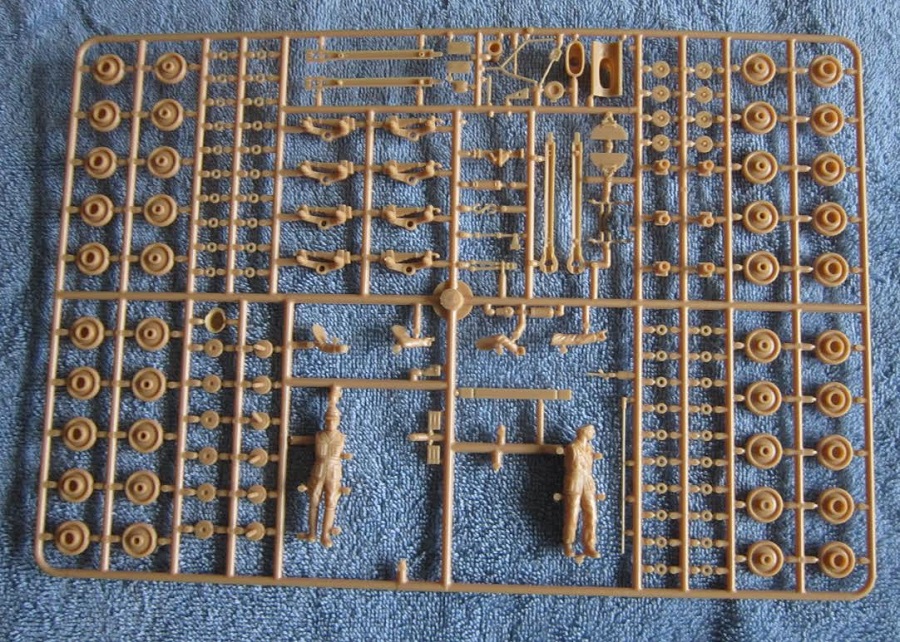 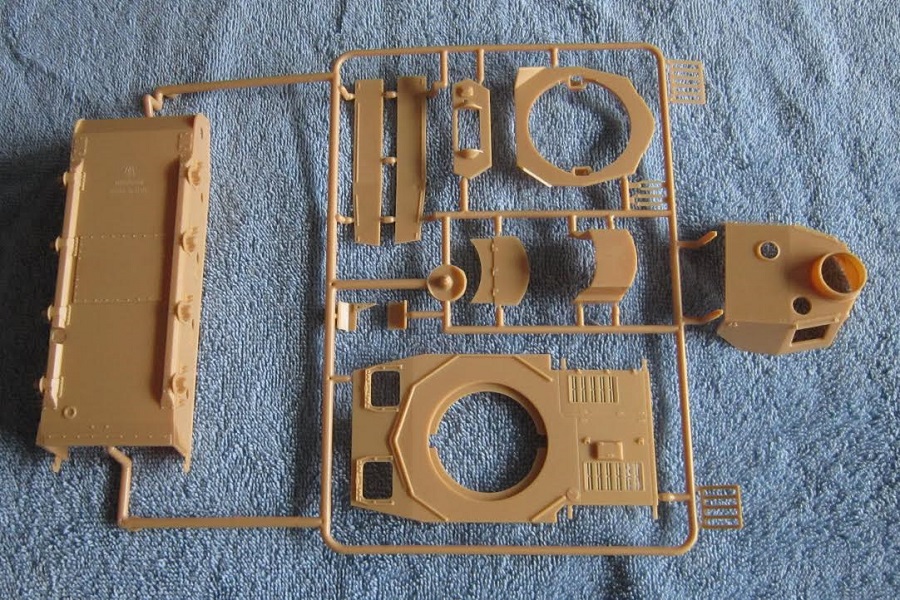 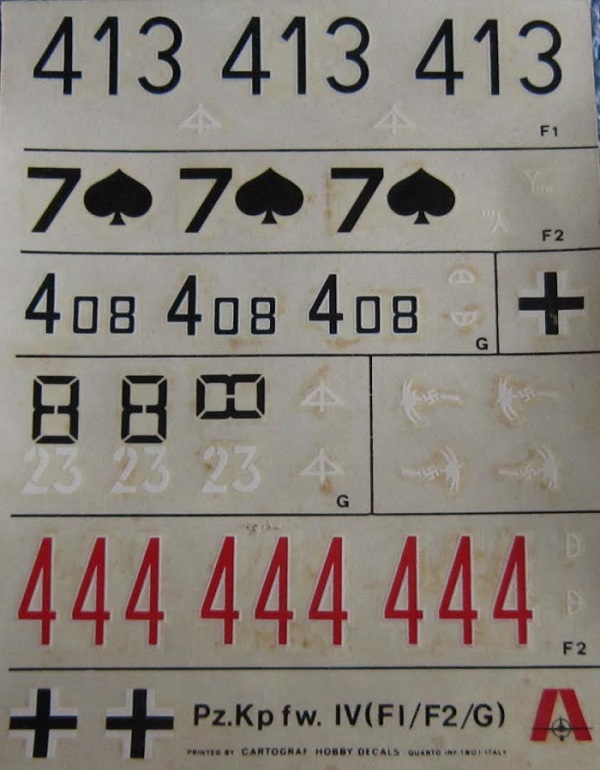 The kit has no interior detail, but the gun barrel options are nice and the figures too. Recommended.

I have a set of my armor Research 75mm German Tank Ammo KwK 40 Panzer IV F2/J for the kit I might use. 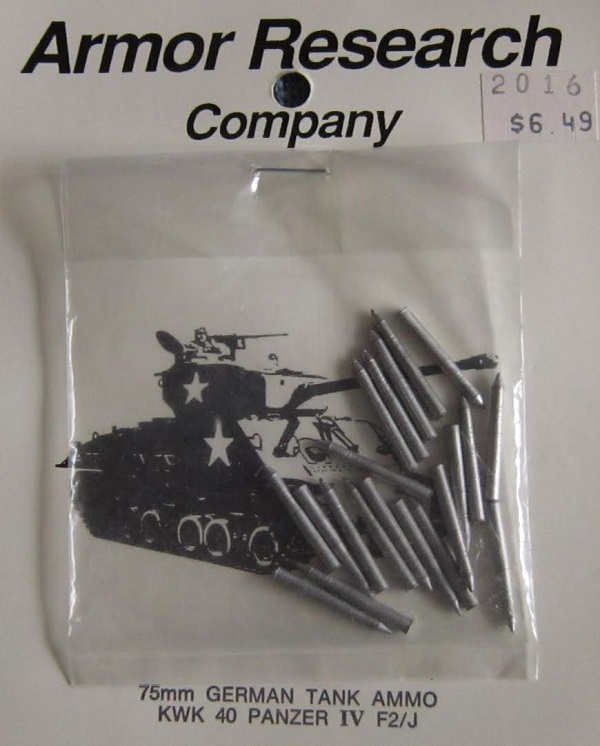 Sprue Bros has the kit as a re-issue, but the box art does not show the 3 figures. Also, the price has really climbed since the 70's.