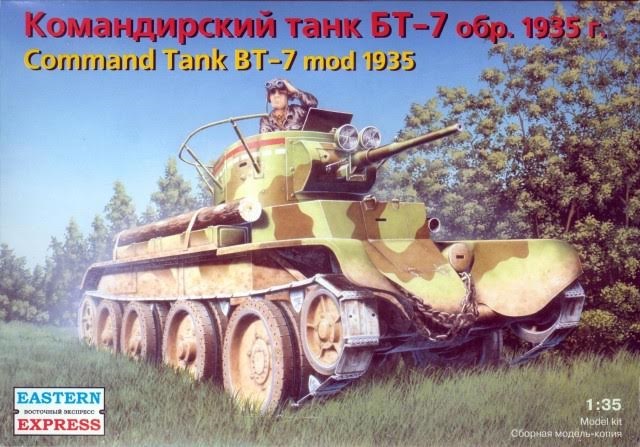 The BT-7  was the last of the BT series of Soviet cavalry tanks that were produced in large numbers between 1935 and 1940. It was lightly armoured, but reasonably well-armed for the time, and had much better mobility than other contemporary tank designs. The BT tanks were known by the nickname Betka from the acronym, or its diminutive, Betushka.
The BT-7's successor was the famous T-34 medium tank, introduced in 1940, which replaced all of the Soviet fast tanks, infantry tanks, and medium tanks then in service.
The first prototypes of the BT-7 had a distinctive canted-ellipse shaped turret mounting both the main gun and a coaxial machine-gun. The specification also called for the project to allow for the installation of new guns without any significant change to the framework: the 76 mm KT-26 or PS-3 main gun (a short-barreled howitzer) and the 45 mm 20K model 1932/38, a long-barreled, high-velocity gun useful against tanks, but less effective than the 76 mm gun against infantry.

In the rear of the turret, there was a rotating drum-type magazine for 18 45 mm shells or a radio station. The prototype underwent an extensive testing program in the summer and autumn of 1934. As a result of this testing, it was felt that a machine-gun was unnecessary on a tank with a 3-man crew, especially as it made the assembly of the turret more complicated.

Therefore, in early 1935, the tank went into production with a simpler design, incorporating the turret from the BT-5. (However, the idea of wheeled/tracked vehicle with a 76 mm cannon was not abandoned and the plant was commissioned to develop a new BT-7 turret from the turret of the T-26-4.) In the production model, a cylindrical turret housed a 45 mm 20K gun with a DT machine gun. On some of the tanks, a model 71-TC radio with frame antenna was installed.

The crew consisted of three men: the commander (who also served as the gunner); the loader and the driver. In 1937, the company launched production of the BT-7 with a conical turret. The main armament remained the same, but the ammunition was increased to 44 rounds. All serving tanks now installed the DT machine gun in the rear niche. For the firing of the gun and coaxial machine gun at night, the tank was equipped with two special projector-type headlamps, and a mask placed on the gun. Subsequently, these lights were retrofitted to earlier models of the tank. Improvements were also made to the drive wheels, caterpillar tracks and gearbox by 1938.

In parallel with the main modification, 154 BT-7A artillery tanks were produced between 1936 and 1938. These were fitted with a larger turret and a 76 mm KT-type gun with 50 rounds of ammunition (40 in a tank with a portable radio).

From December 1939, the BT-7A went into production with some minor modifications - additional bracing for rigidity, a floor hatch, and a smaller air filter. The diesel tanks were more fuel efficient, and the petrol-powered tanks were soon placed into reserve.

In 1938, four experimental BT-8 tanks mounted with V-2 diesel engines were produced. After comparative tests of the BT-7 and BT-8, the diesel tanks were put into production in 1940 (under the designation BT-7M) with the powerplants being produced in a separate plant of the Voroshilovets factory to ensure supply.

Several experimental tanks were conceived based on the BT series, for example the wheeled BT-IS, designed by N.F. Tsyganov, a platoon commander in the 4th Armoured Regiment of the Ukraine Military District and self-taught designer. The type successfully passed field tests, but was not ordered in bulk. Another Tsyganov design was the S-2 "Cherepaha" (turtle, черепаха), with a new design of hull and turret. There was also the command tank KBT-7 with a fixed turret, the OT-7 mounting a flamethrower, the KhBT-7 designed to protect from toxic contamination and lay smokescreens, the SBT bridgelayer and the TTBT-7 and Thubten-7 radio-controlled tanks (known at the time as Teletanks). Finland converted 18 captured tanks into BT-42 assault guns.

Shortly before Operation Barbarossa (the German invasion of the Soviet Union), the BT-7 underwent an up-armor program. In 1940, Mariupol Ilyich Iron and Steel Works produced 50 sets of hinged homogeneous armor for the BT-7M, which increased the weight of the test tank to 18 tons. Unfortunately, nothing is known about the installation of these kits to military units.

Eastern Express is a model company based in Russia. I think they only marketed AFV kits.

The box art shows a BT-7 moving across a grassy area in a forest. It is in a tan base with wide green bands on it. It has a row of white dash-marks around the top of the turret.

The tank commander is looking out of the top turret hatch with a pair of binoculars. He is wearing a black leather uniform.

One side panel has a one paragraph history of the BT-7 in Russian, followed by a color side profile of the tank in overall Russian green with a white outline circle on the sides of the rear turret extension.  It is indicated here that the kit is for modelers over 8 years of age.

The other side panel has four color box arts of other AFV kits that Eastern Express markets:

No kit numbers are provided for these 4. A look at Easter Express's web site shows that they make numberous versions of the BT-7 (8 of them).
​WHAT'S IN THE BOX:

This kit contains 5 medium-grey trees of parts in 3 cloudy cello bags, the decal sheet and the instructions.

The instructions consist of a single sheet, folded in the center to create 4 pages in 8 1/2" x 13" page format.

Page 1 of the instructions begins with a black and white repeat of the box art, followed by a one paragraph history of the BT-7 in Russian and English and international assebly symbol explanations, above Eastern Express's P.O. box address in Moscow, Russia and their tel/fax number there.

Page 2 begins with ATTENTION about the kit in 4 languages, including English, above the first 5 assembly steps.

Page 3 to the top of page 4 give a balance of a grand total of 13 assembly steps.

The  bottom of page 4 has a single side-profile with Russian text only. I assume this is the painting and marking instructions?? It shows the BT-7 with white circle mark on it. 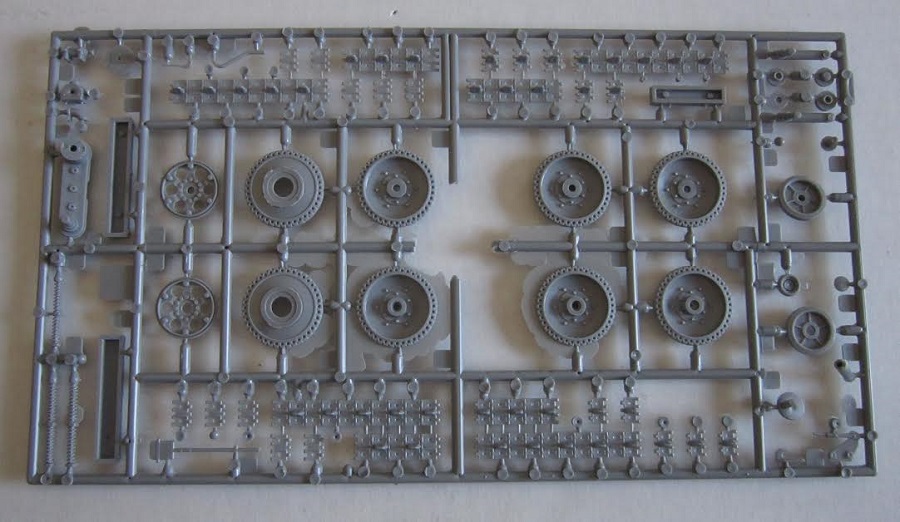 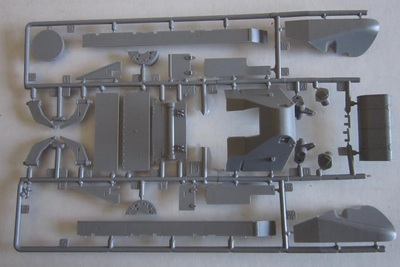 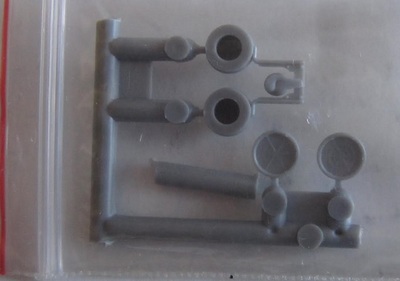 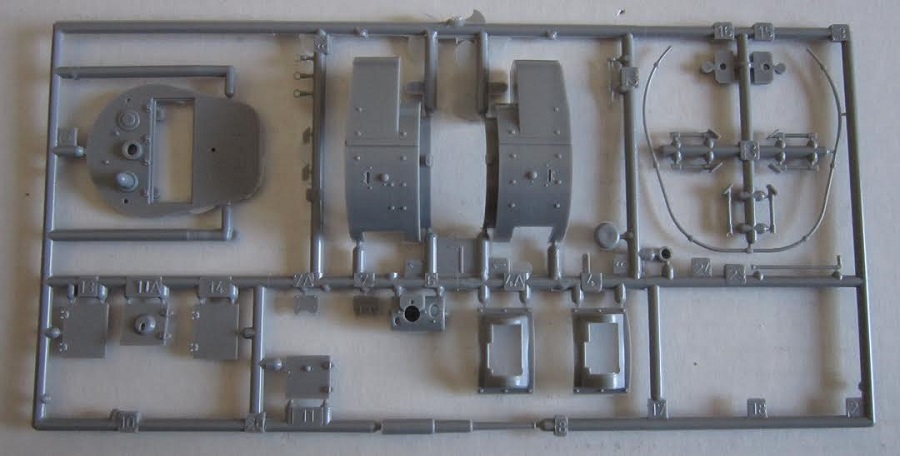 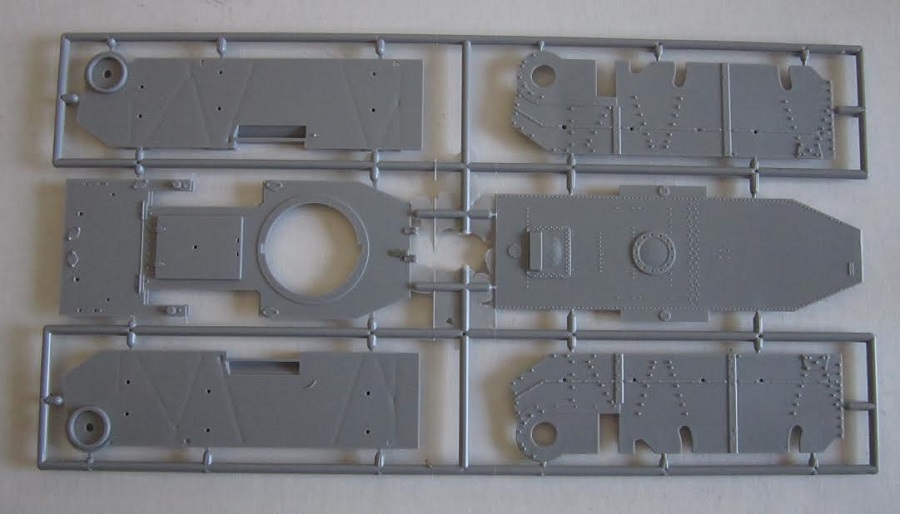 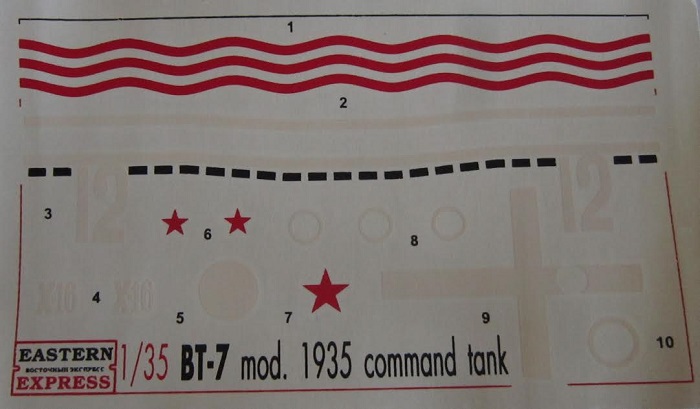 There are new crew figures, interior details or clear parts in the kit.

This is a nicely detailed older kit.