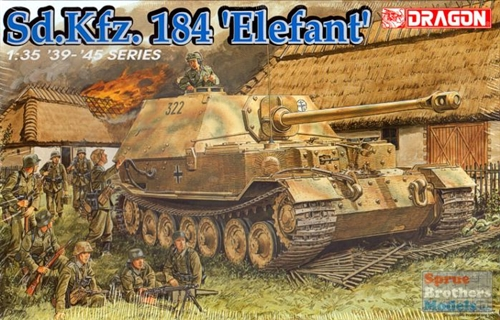 "Elefant" was the German code name for the Panzerjager Tiger (P) Sd.Kfz. 184, a limited-traverse self-propelled gun adopted in small numbers by the German army in 1943. The vehicle had originated from a German army demand for a new tank armed with the 88 mm (3.5 in.) gun and capable of holding its own on the Russian Front.

This system had some theoretical advantages, but was extremely complicated and difficult to manufacture, and provision of the air-cooled engines delayed production of the prototypes. Although 90 pre-production vehicles had been ordered, only a few were completed as tanks.

In 1942, the Henschel tank design was accepted for service and the balance of the Porsche production, some 85 vehicles, was shipped to the Alkett factory in Berlin-Spandau to be converted into tank destroyers. New hulls were built, with additional amour, and the 88 mm (3.5 in.) Pak 43/21./71 antitank gun installed in the front face of the upper hull.

Instead of the air-cooled engines, standard Maybach tank engines were fitted, driving the gasoline-electric transmission. Acceptance trials were performed in March 1943 and the Elefants were then shipped to Russia. They were originally called "Ferdinand", after Dr. Ferdinand Porsche, but the troops preferred to call them "Elefants" because of their size and this was later adopted as the official name.

All Elefants were assigned to Army Group Model and were sent into their first action in Operation Zitadelle, the Kursk offensive. They were mechanically unreliable, carried insufficient ammunition, and due to the limited traverse of the gun were unable to protect themselves. There was no smaller machine gun mounted either.

As a result many of them were lost: several were recovered to be used in other actions, but their rate of breakdown was faster than the rate of supply of spare parts and they soon went out of service. A few were sent to Italy in 1944, but the conditions there were no better and they were all lost or abandoned by their crews.

Although the Elefant had remarkable technical achievements, they were an impractical combat weapon which well illustrates the dangers of designing armored vehicles solely with an eye to theoretical advantages and without considering basic tactical demands.

True to its nickname, this new DML kit has to be the largest box that they have ever packed a 1/35th scale kit into. It is absolutely jam packed with no void around the part trees inside.

The box art is done by our old friend Ron Volstad again. He was once the resident artist that did most of DML's box arts.

It shows an Elefant, with a commander in the top hatch, conversing with one of a eight man squad of German infantrymen next to the vehicle.

This is the unit marking for 3rd Company, Schwere Panzerjager Abt. 653, Galicia/Russia 1944.

I wonder at the thatched roofed buildings in the background. They look like Russian buildings. To my knowledge, the Elefant received its bow mounted machine gun and the commander's hatch on top after all Elefants were sent to Italy, after the Kursk debacle. Am I wrong?

One corner of the box art says the kit contains 512 parts and is intended for modelers age 10 and older.

One side panel has a color box art of a German Sd.Kfz. 250/11 le Spw with Panzerbuchse 41 (kit no. 6132) Followed by a CAUTION that when you use glue or paint near an open flame be careful and be in a well ventilated room, in 6 languages, including English.

Kit is not suitable for children under 3 due to small sharp parts, in multiple languages, including English and DML's street address in Hong Kong, China, copyright date of 2000 and MADE IN CHINA.

The other side panel has 3 color walk-around type photos of the Elefant made up and a repeat of the copyright date and address.

​Upon opening the large box, one is greeted with a chock-full tray of parts. There are eight cello bags of 16 parts trees. 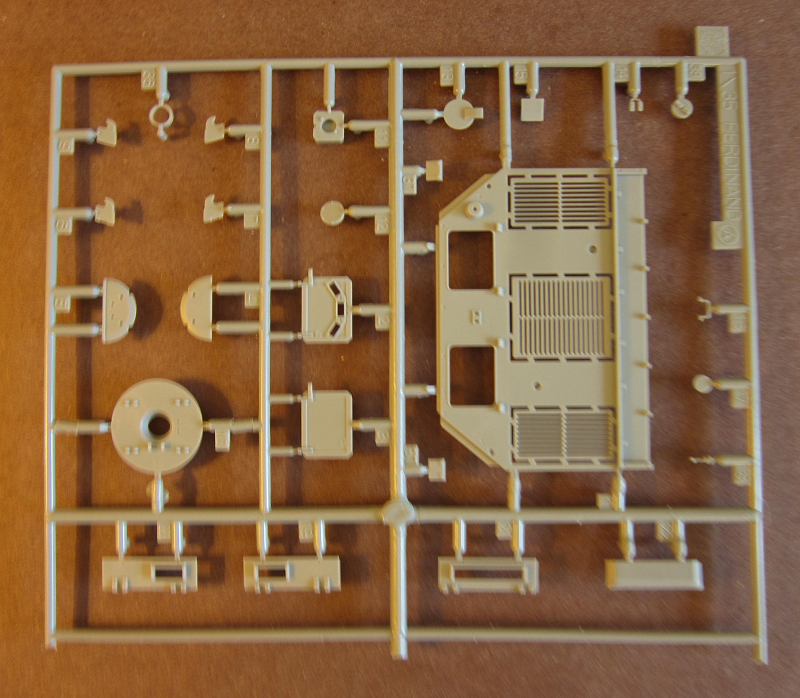 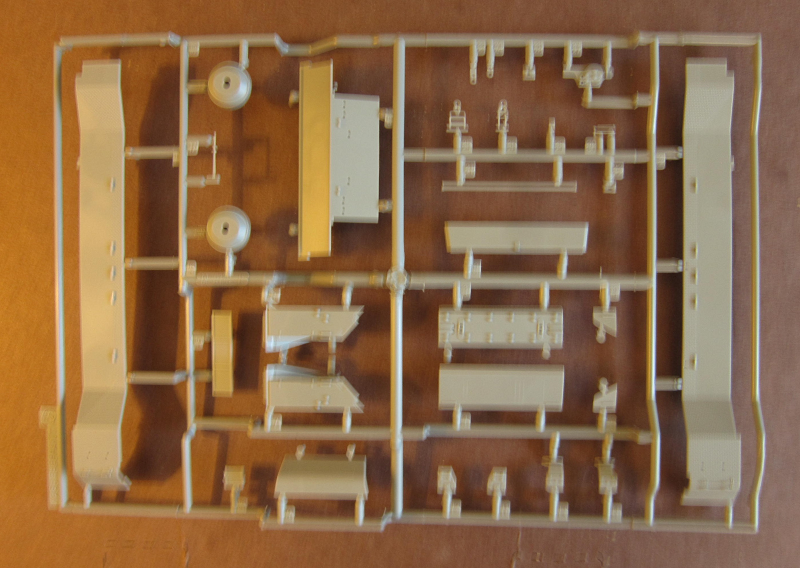 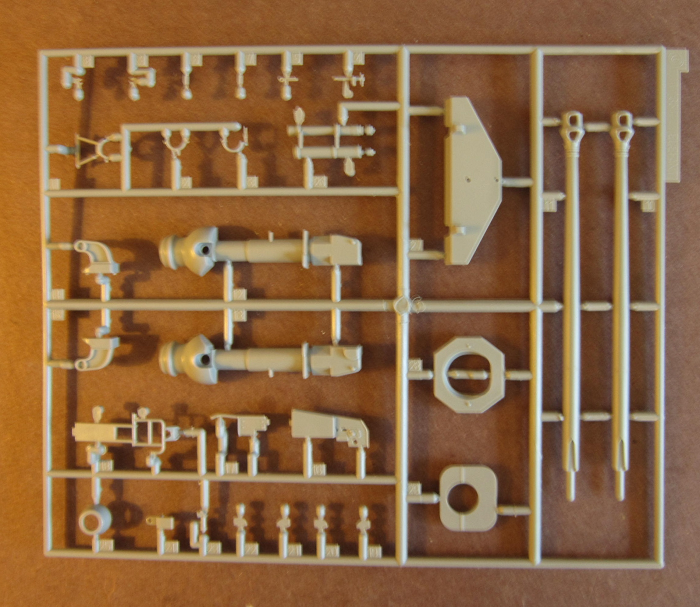 ​There are four identical, medium sized letter "D" trees. These hold the individual track links. There are 60 links per tree, for a grand total of 240 links. 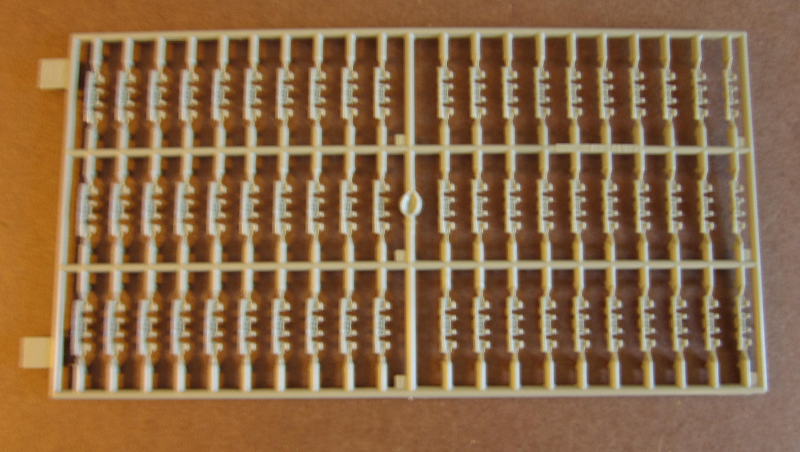 Seven parts on each tree are blued-out on the instructions as being excess/not used.

There are three identical, small letter "F" trees. These hold the bogies and road wheels. (18 parts per tree) 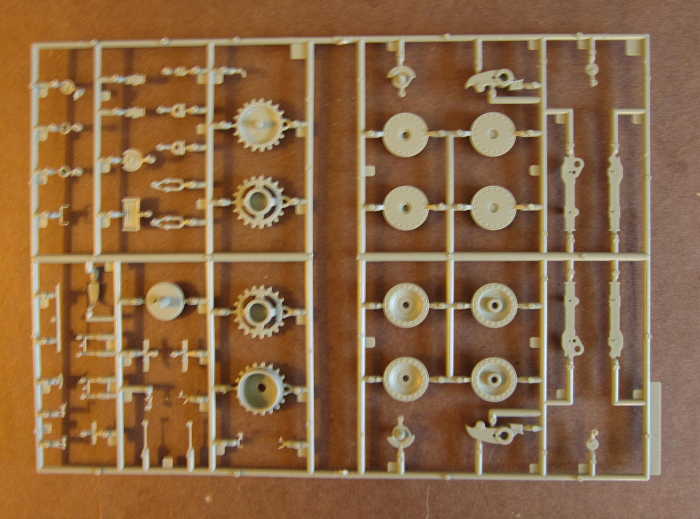 ​Part letter "G" is the lower hull piece. It is in a cello bag all by itself. 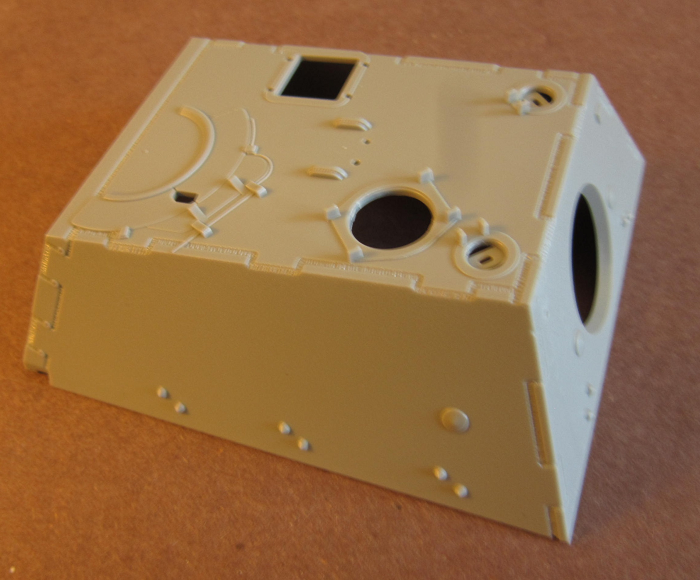 ​ Unfortunately, DML did not mold any zimmerit to the lower half of this part.
Zimmerit is prominently shown in that area in all wartime photos I have seen of Elefants.

Cavalier brand makes a plastic set of zimmerit (set no. 0122), designed to go on Elefant kits. I have this set and hope it will look good on the kit. 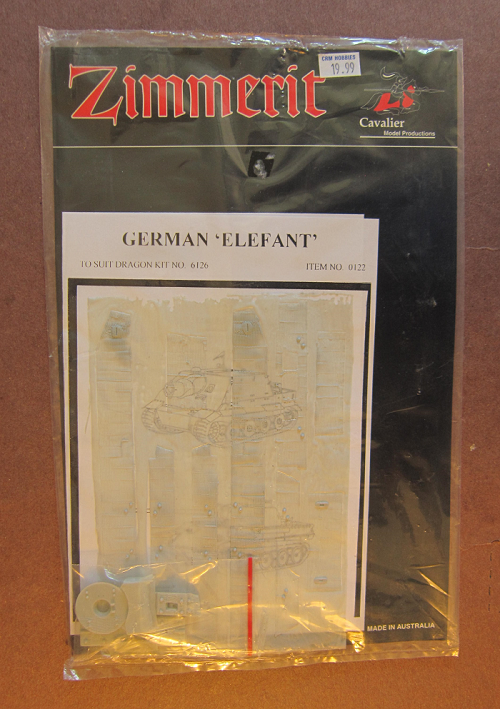 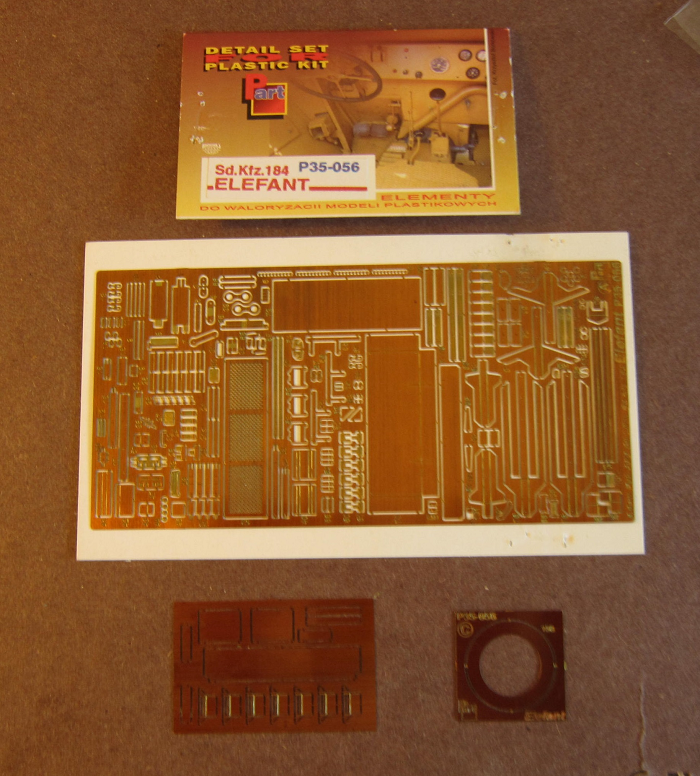 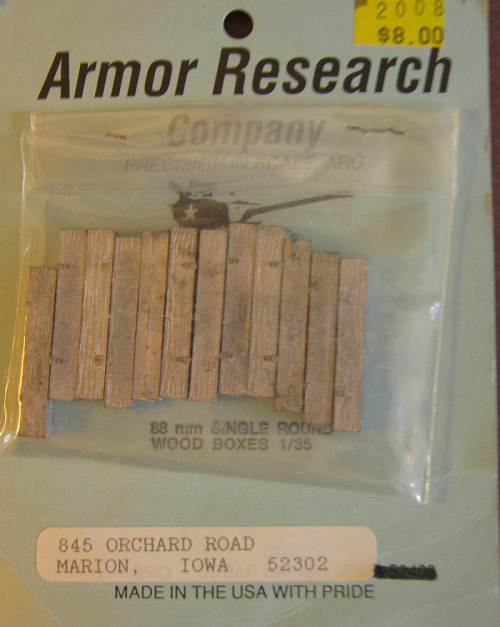 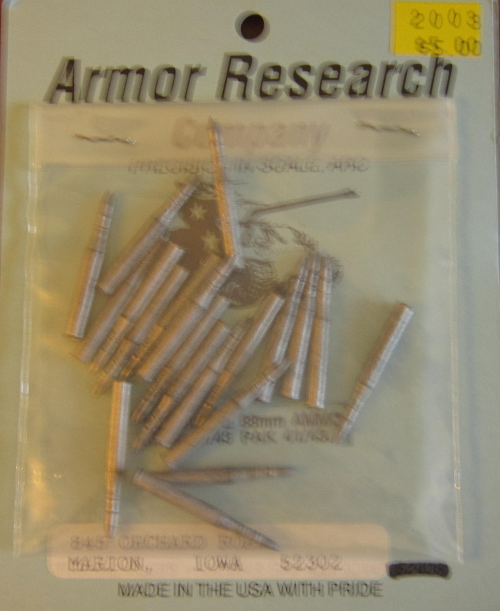 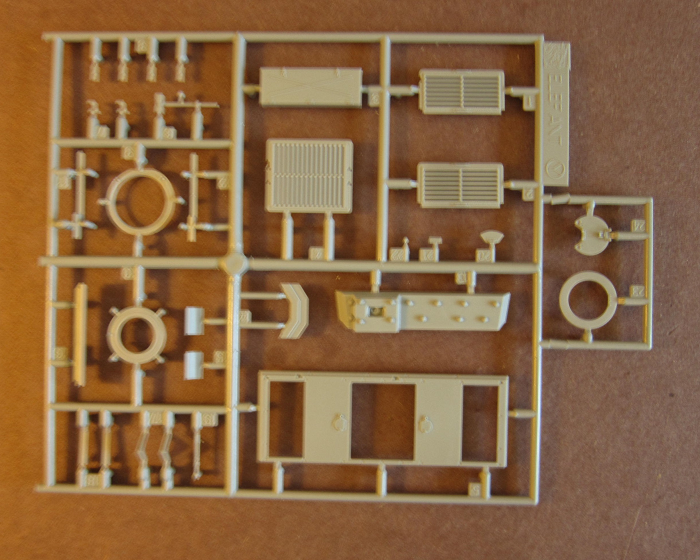 Three marking options, on the decal sheet, are for the same Panzerjager Abt. 653 unit. Two are for Galacia/Russia 1944, and the third one is for Italy 1944. 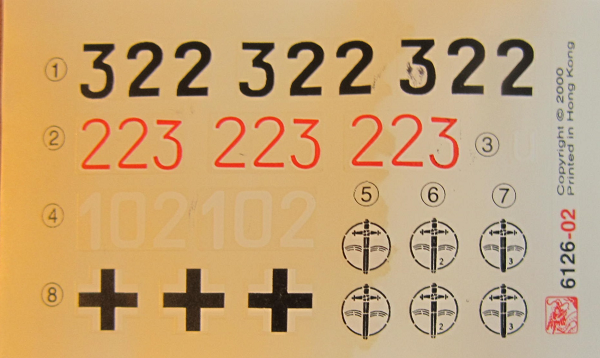 ​Finishing out the kit is the large instruction sheet. It accordion-folds out into eight pages in 14" x 8 1/4" page format.

Page 1 repeats the box art, in black and white at the top. This is followed by parts tree drawings at the bottom.

There is no vehicle history provided (my pet peeve with DML kits). History here was gleaned off Wikipedia site.

Page 2 begins with international assembly symbol explanations, followed by a paint number guide. The bottom of the page gives the first assembly drawing.

Pages 3 through the top of page 7 give the balance of 22 total assembly steps.
The bottom of page 7 and all of page 8 give us the 3 painting and marking option drawings.

It is in a base of sand-yellow with dark-green and red-brown splotch pattern. It has a white 102 on the sides of the fighting compartment.

Page 8 has two 4-views of Elefants.

Both are in the same scheme as the one shown on page 7.

The second one is the box art one. (already described above)

From what can be seen, this kit should make up into one big and beautiful model. It most likely puts the aging Italeri mold of the Elefant to shame.

I intend to get the "Ferdinand" version of this vehicle (that DML also produces) later.