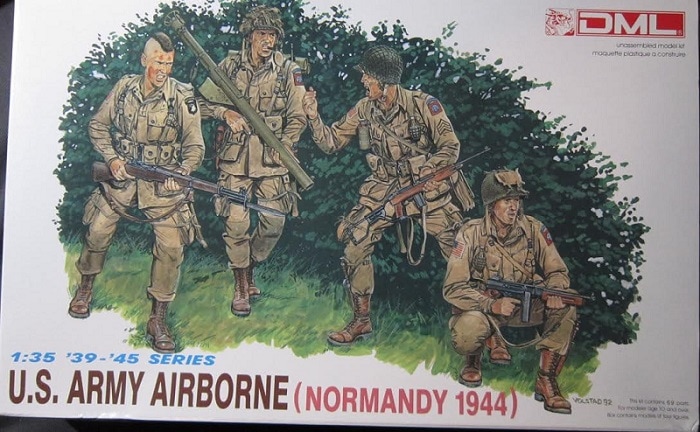 The box art shows 4 U.S. Airborne troops in the hedgerows of Normandy.

They are all dressed in tan uniforms with pants that have large satchel pockets.

The first man on the right is kneeling and holding a Thomson submachine gun. He is wearing a steel helmet with a mesh cover and a small sack on the front of it. He wears high buttoned shoes. He has a grenade hung on one strap on his chest. He has a couple canvas sacks and a shovel on his belt.

The next man to the left is standing and beconing the 2 men behind him with his right arm. He is armed with a carbine that has a folding wire shoulder stock on it. He wears a steel helmet with a mesh cover and high buttoned shoes. He has a grenade slung on a strap on his chest and several canvas pouches on his belt along with a shovel in its carrying case.

The third man wears a steel helmet with camouflaged cover on it and is carrying a bazooka. He has a number of canvas pouches on his belt and a shovel in its pouch. He also has high buttoned shoes on.

The fourth and last man is bare headed and he has his hair cut into a Mohawk. He also has war paint on his face. He wears the high buttoned shoes and is armed with a carbine with the bayonet attached to it that he is carrying in both hands in front of him. He has a shovel and several canvas pouches on his belt.

One corner of the box art says that the kit is intended for modelers over the age of 10 and that the kit contains 69 parts.

One side panel of the box says that the kit contains parts for 4 figures and that it does not include paint or glue. This is in 6 languages, including English. This is followed by by Marco Polo Import, INC's street address in City of Industry, CA and their FAX number. Marco Polo was the U.S. importer and distributor of DML kits at one time in the past.

The other side panel has the color box arts of 3 other kits that DML manufactures: kit no. 6005, German Fallschirmjagers, kit no. 6006, German "Cross of Iron" troops and kit no. 6007, German Super Tank "Maus".

There is a color 2-view illustration of each of the 4 figures.

Below them there are black and white line drawings of a M1A1 carbine ammo pouch, a M3 trench knife in a M8 scabbard, a M1935 field bag and a M1938 dispatch case. 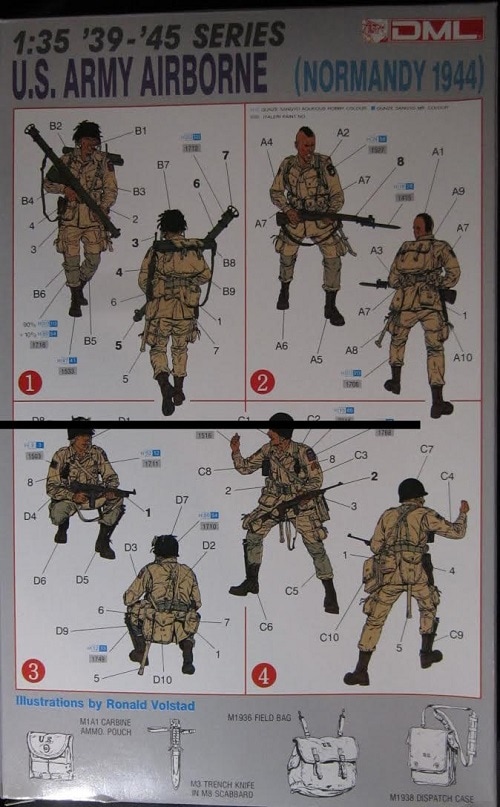 This kit contains one large light-tan tree and a small light-grey tree in 2 sealed cello bags.

The large light-tan tree holds: the parts of the 4 figures (divided into seperate heads, torsos, arms and legs), 3 steel helmets, 4 canteens, 4 shovels (3 in carrying cases and one loose), a bayonet in its scabbard, 2 canvas satchels, 2 grenades, 2 pistol holsters and several other canvas pouches and ammo cases (60 parts) 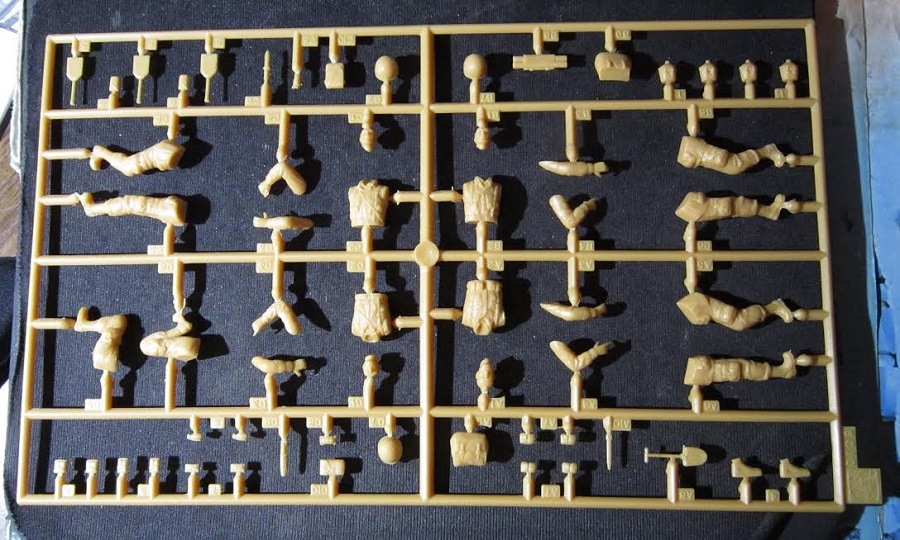 ​
The small light-grey tree holds: a bazooka, a Thompson sub machine gun, a carbine with bayonet attached, two carbines with wire folding stocks (one with the stock attached and a folding stock loose).(8 parts) 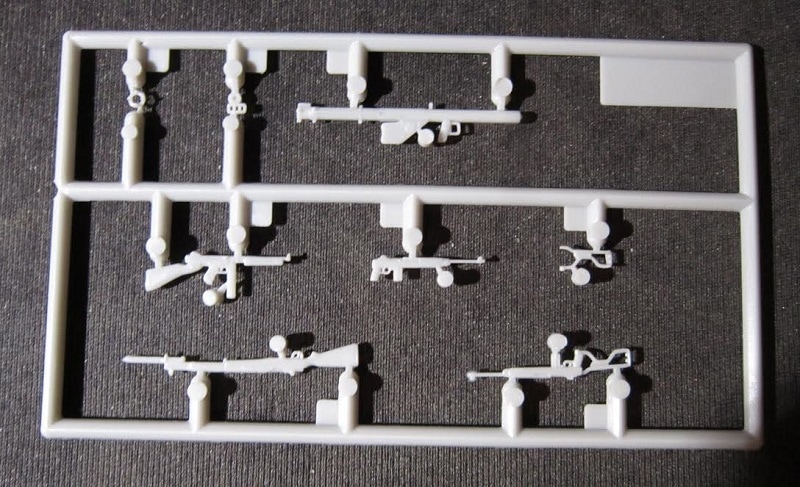 ​This is a neat kit of U.S. soldiers. They are well detailed and animated poses.

Highly recommended.
​I purchased my kit in the early 90's at my local hobby shop.