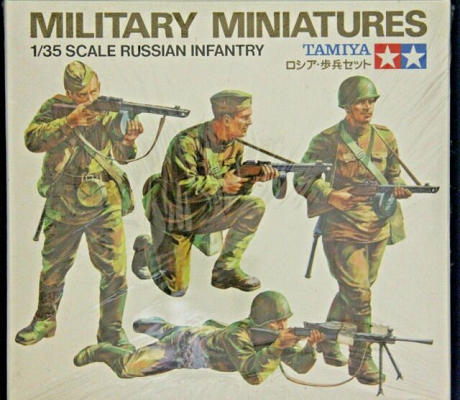 I won my kit in a raffle at the IPMS contest in Madison, WI.
​HISTORY:

The SU-100 (Samokhodnaya Ustanovka 100) was a Soviet tank destroyer armed with a 100 mm anti-tank gun in a casemate superstructure. It was used extensively during the last year of World War II and saw service for many years afterwards with the armies of Soviet allies around the world.

The SU-85 was developed from the chassis of the T-34 tank replacing the turret with a larger, fixed superstructure that allowed a larger gun to be fitted: the 85 mm D-5 gun, providing dramatically upgraded firepower compared to the T-34's 76.2 mm models. Introduced to service in 1943, the SU-85 was quickly rendered obsolete as a new tank design featured the same gun on the T-34-85.

This prompted the design of a more advanced turretless tank destroyer with an even more powerful cannon. Development was conducted under supervision of L. I. Gorlitskiy, chief designer of all medium Soviet self-propelled guns. The work started in February 1944 and the first prototype of the SU-100, "Object 138", was delivered in March.

After intensive testing with different models of 100 mm gun Soviet engineers approved the D-10S gun for mass production. This gun was developed in Constructors Bureau of Artillery Factory No. 9 under the guidance of F. F. Petrov. After the Second World War this gun was installed on T-54 and T-55 tanks; these vehicles and their derivatives were in service forty years after initial development.

It was built at the UZTM (Russian abbreviature УЗТМ for Уральский Завод Тяжелого Машиностроения – Ural Heavy Machinery Factory, also called Uralmash) in Yekaterinburg. The SU-100 quickly proved itself to be able to penetrate around 125 mm (4.9 in) of vertical armor from a range of 2,000 m (1.2 mi) and the sloped 80 mm (3.1 in) front armor of the German Panther from 1,500 m (0.93 mi)

The hull of the SU-100 had major improvements over the SU-85; the thickness of the front armour was increased from 45 to 75 mm (1.8 to 3.0 in), and the commander's workplace was made in a small sponson on the right side of the hull; combined with the commander's cupola this improved the commander's effectiveness.

Its German Jagdpanzer-family counterparts — the Jagdpanzer IV, Jagdpanther and Jagdtiger, by comparison, lacked this key piece of observational equipment. For better ventilation two ventilator units were installed, instead of only one as in the SU-85. Mass production began in September 1944.

The box art shows 2 SU-100's moving down a dirt alleyway that is lined with wood fences. Behind the fence at the rear are trees and houses.

Both tanks are overall dark Soviet green with no markings shown. The 3 man crew of the lead tank are looking out of the upper hatches.

One side panel has 5 small profiles of schemes for the SU-100:

1. Overall Soviet dark green with winter white-wash mostly rubbed off. It has Russian wording and number 23 on it's side.

2. Overall Soviet dark green with white number 433 on it's side.

3. Overall Soviet dark green with white number 482 on it's side.

4. overall Soviet dark green with a heavy coat of winter white-wash. One area left dark green has a white K-17 on it.

5. Overall Soviet dark green with a Soviet red star outlined in yellow on it's side.

These are followed by illustrations of the decal sheet and the 2 brass PE frets in the kit and CAUTIONS to not use glue or paint near a flame and to be in a well ventilated room when you do use them.

Model is for modelers 10 and over and is not suitable for children under 3 because of sharp parts, in 6 languages, including English.

The instructions consist of a single-sheet that accordion-folds out into 8 pages in 8" x 12 1/2" page format.

Page 1 begins with a black and white repeat of the box art, over credits to 3 guys for their help designing the kit, and the parts trees illustrations.

Some parts are shown blued-out in these illustrations. Meaning they are excess and not needed to complete the kit.

Page 3 to the top of page 6 have a balance of a total of 18 assembly steps.
The bottom of page 6 has marking and painting instructions of two SU-100's as 4-views:

1. A SU-100 in overall dark green with a Soviet red star outlined in yellow on its side. It is of an unknown unit.

2. A SU-100 in overall dark green with remnants of winter white wash on it and white Russian words, number 23 and a white square with a number 8 on it. Itis with the 1st Guards Mechanized Corps., Hungary 1945.

The bottom of page 8 has the copyright date 2007 and decal application instructions in 6 languages, including English. 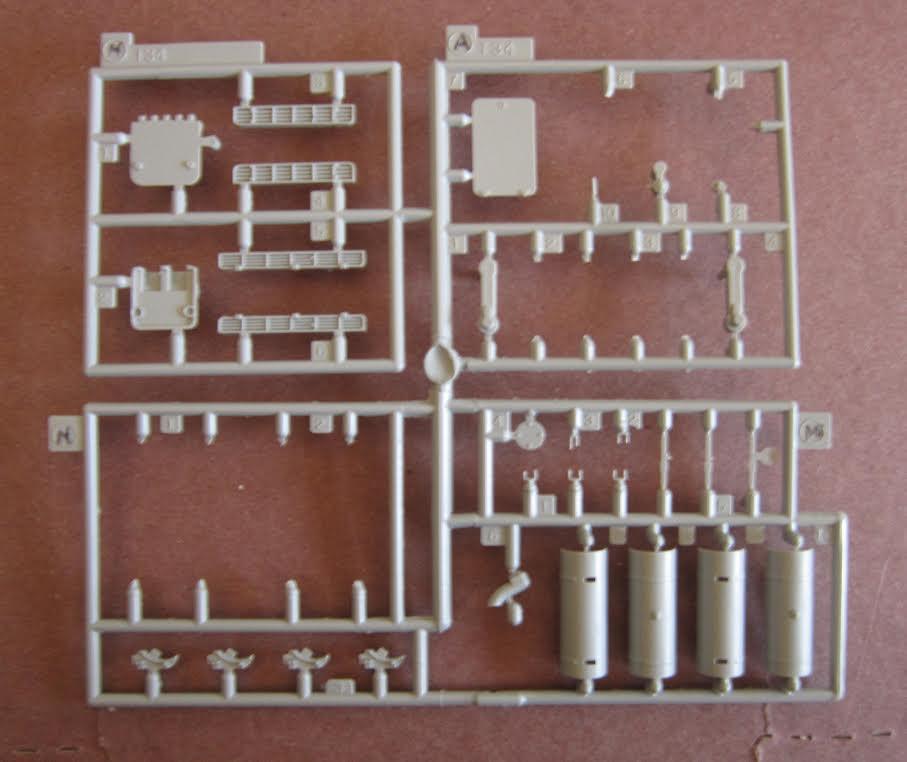 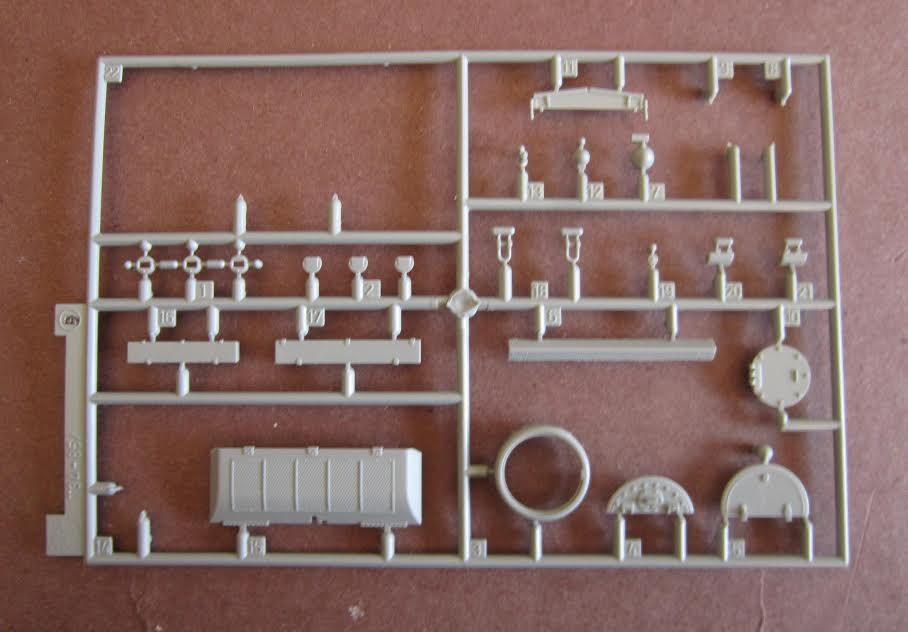 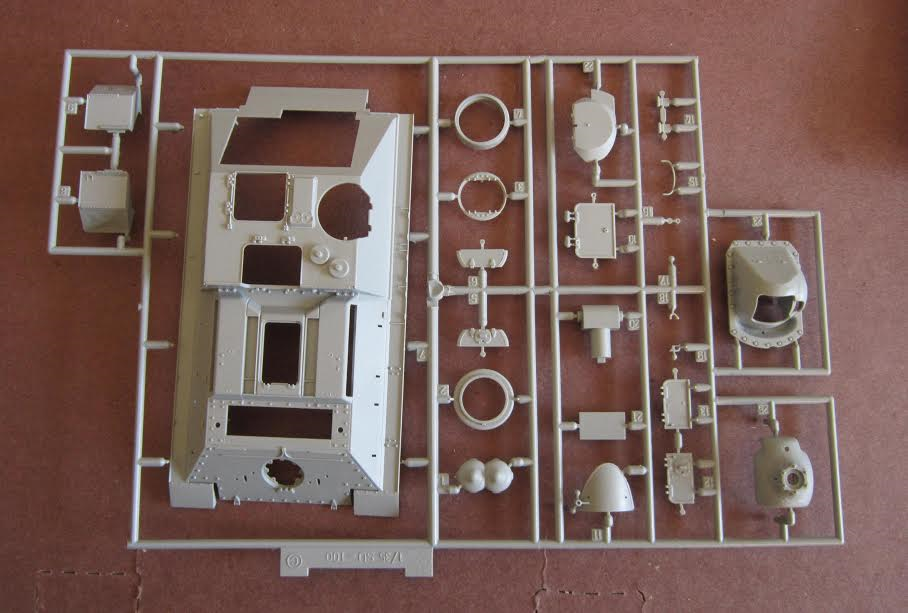 ​There are 2 identical medium-gray letter D trees. They hold: road wheels with their end caps (15 parts per tree)
​There are 2 identical medium-gray letter K trees. They hold: fuel barrels, main gun, tow hooks (11 parts each) The main gun parts are excess as a turned metal barrel is included in the kit. This is co-joined to D tree. 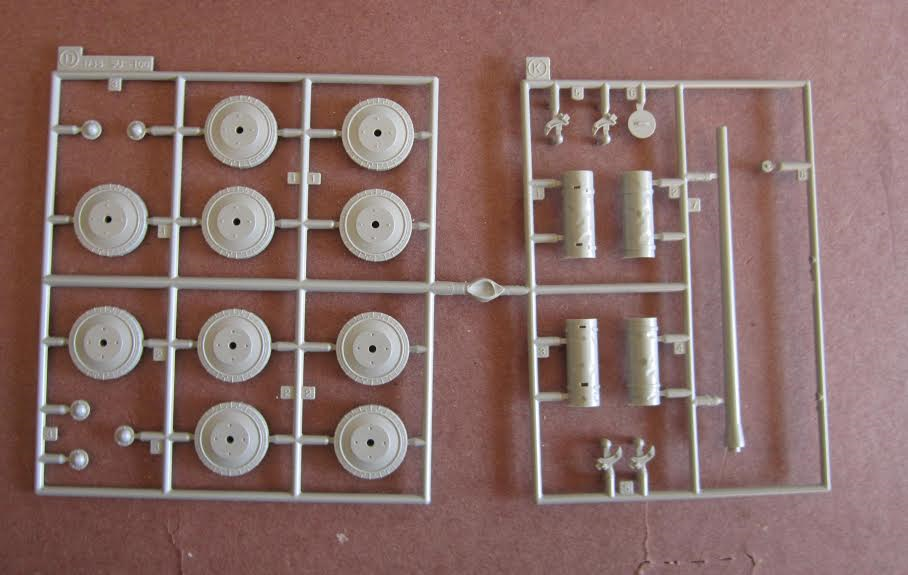 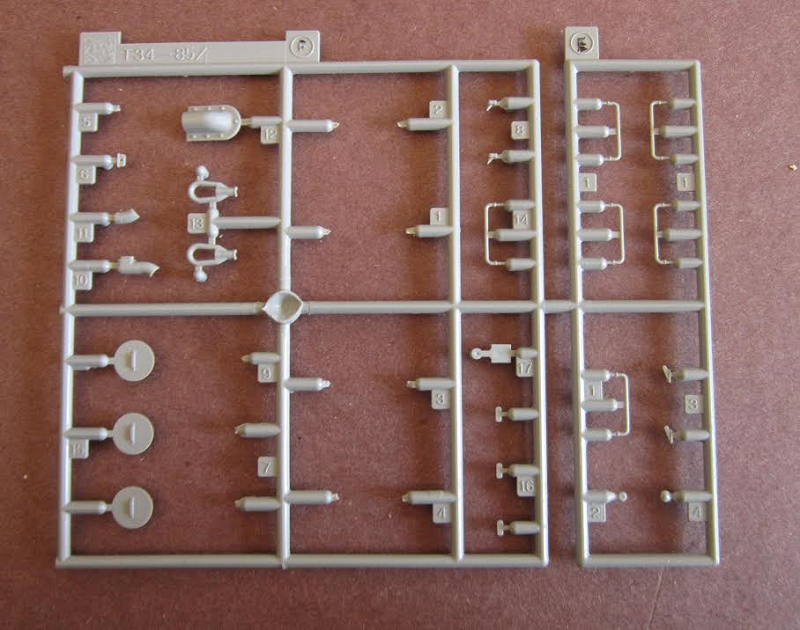 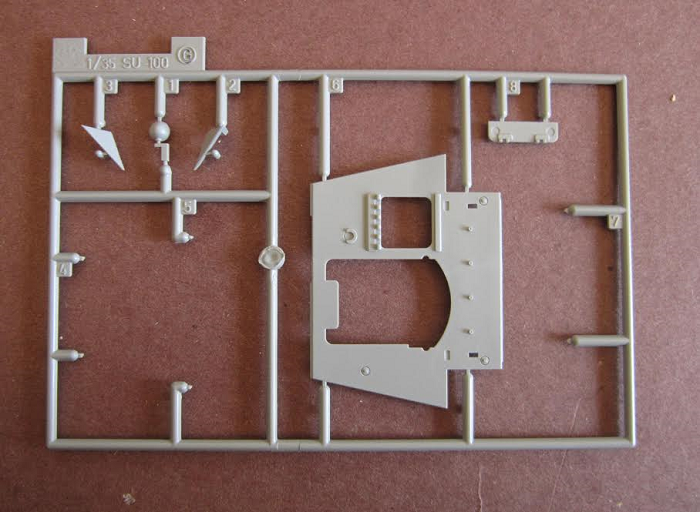 There are 2 identical medium-gray letter N trees. They hold torsion springs in boxes etc. (18 parts per tree) All of these trees are joined together 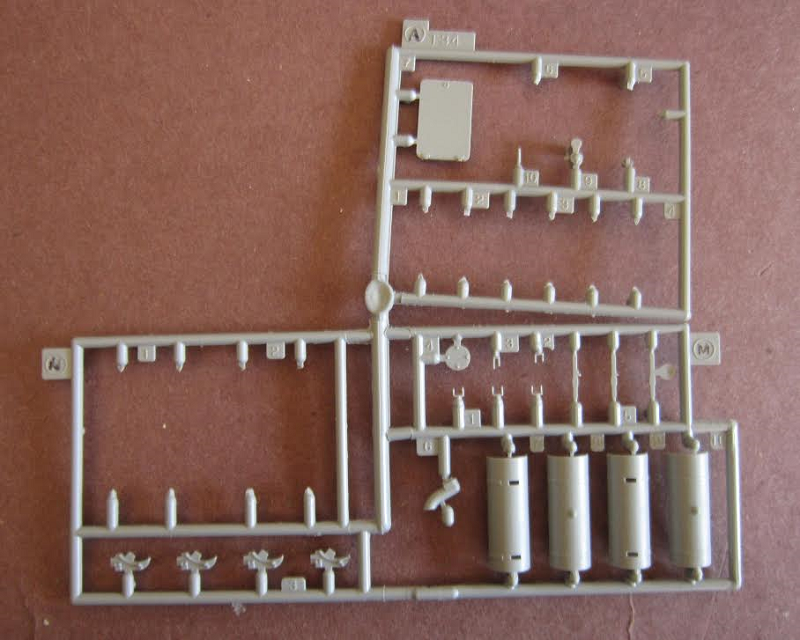 There is no letter J tree. 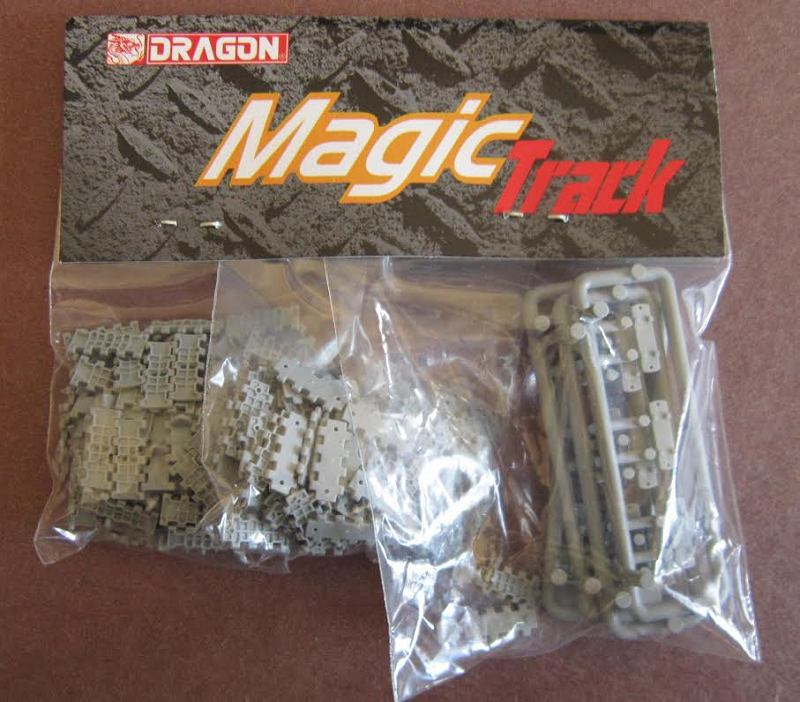 ​Letters MA & MB are brass PE frets. They hold many parts such as the air intake screens, tool straps etc. 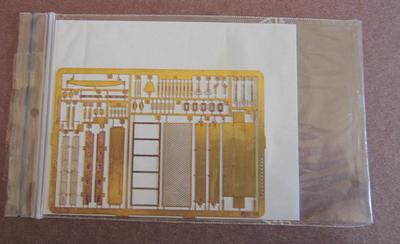 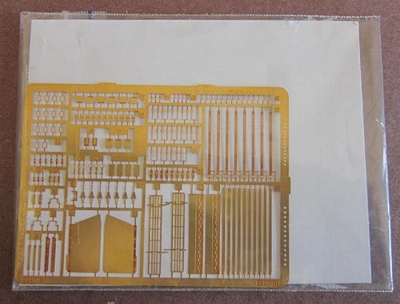 ​Letter MC is another brass PE fret. It has two holes in it that are obviously to use for masking purposes, but what for I cannot determine?? 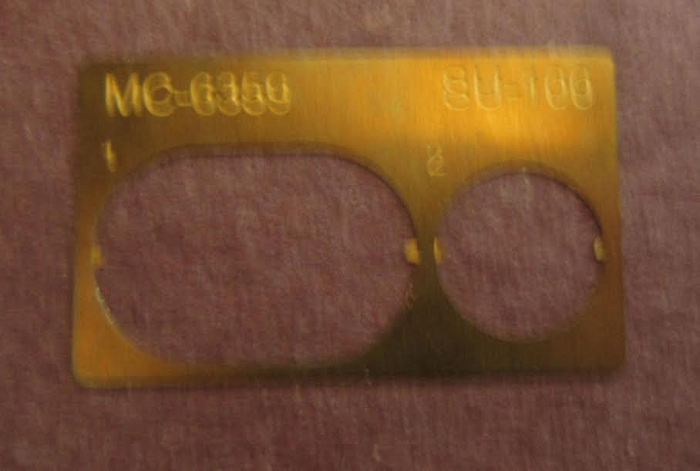 J tree contains the clear parts that are also used in the T-34 kit. 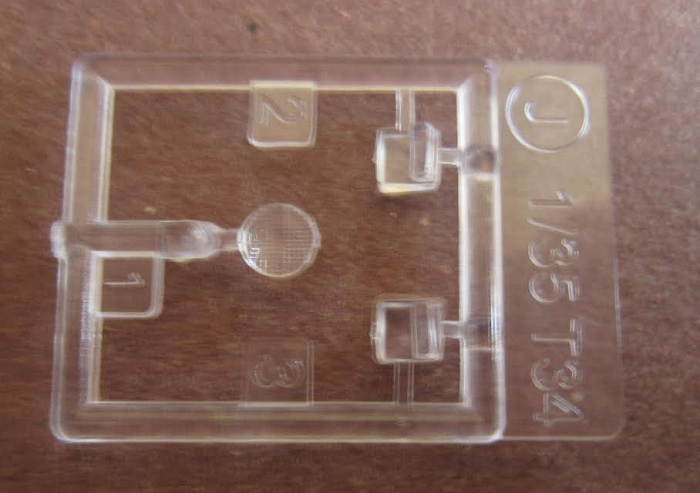 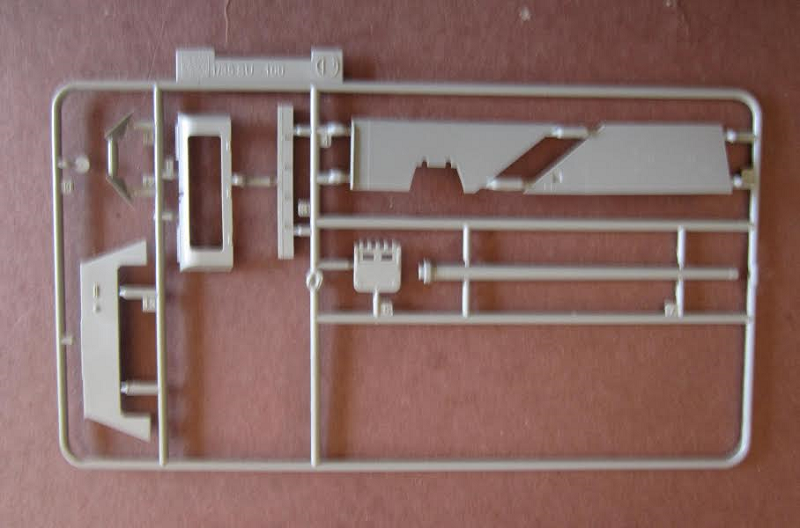 ​Letter Q is not shown anywhere in the assembly instructions. (12 parts)

Letter S in the length of metal wire for the tow rope. 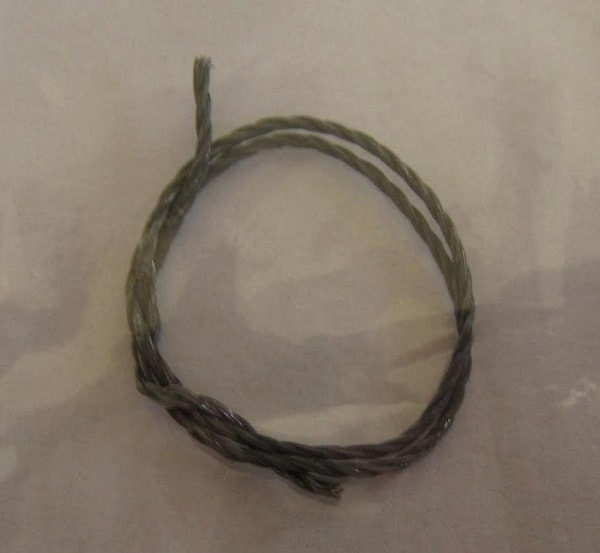 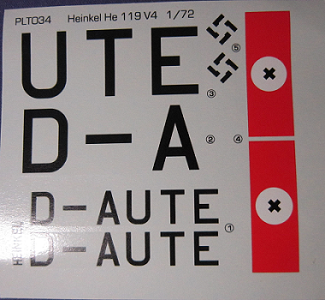 ​ I have started to assemble this kit and only got up to assembly step 5.