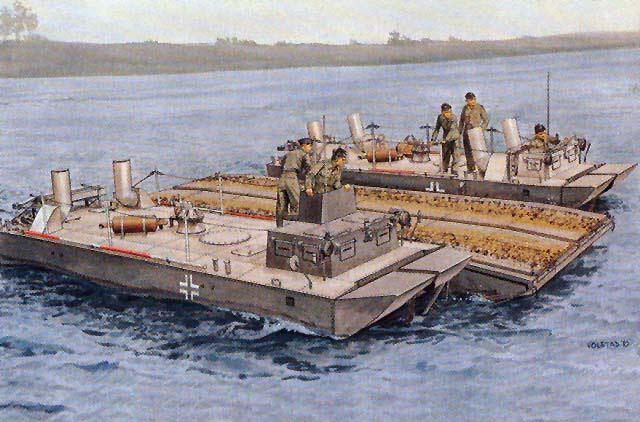 like many combatant nations in WWII, the Germans were faced with river crossings roughly every 10 miles or so in European conditions. While taking bridges intact was obviously a priority and having engineer bridging units a must, they did not have any true means of amphibious crossings in hand during the war. The closest that they came was the boatlike Landwasserschlepper which was not armored. Later in the war Magirus was tasked with creating an armored replacement, and as such did produce two prototypes of the Panzerfaerhe (armored ferry) vehicle.

This it was not, as it was basically a large amphibious vehicle that carried any troops or cargo internally (ferries by their very nature carried their cargoes on open decking or at least on a main deck). As a result, experiments were made with a decking set that connected two of these vehicles together (and which was apparently tested with the two Magirus prototypes). But by that time (mid 1942) the Germans apparently saw such vehicles as a luxury they could no longer afford.
​THE KIT:

This kit comes in a large shrink-wrapped box that is further sealed below the wrap with circles of scotch tape.

The box art shows this ferry unit in a river with a pontoon bridge unit and a second powered ferry. However, there is only one ferry in the kit and none of the 5 man crew shown aboard the units.

A second kit of just the ferry is DML kit no. 6625 and I understand that their kit no. 6669C will include two ferry's and the pontoon bridge and will probably share the same box art as this kit. 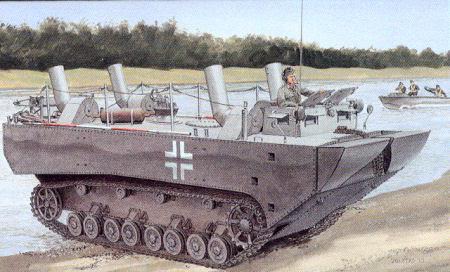 The only markings is a white skeletal German cross on the sides of the powered ferry.
One corner of the box art says the kit consists of 510 parts, is for skilled modelers over 14 and it contains one vehicle and floating platform.

This is followed by a CAUTION warning about getting glue or paint to close to a flame and to use both in a well ventilated room, in 6 languages including English.

This is followed with a repeat that the model is for modelers over 14 in the same languages.

The copyright of the kit is stated as being 2010.

DML Dragon's street address in Hong Kong is provided, MADE IN CHINA and their web address.

The other side panel has illustrations of the kit's features done as white illustrations on black background. The illustrations shown are:
​Contains model of one vehicle and floating platform.
Gepanzerter Landwasserschlepper of Panzerfahre with Fahrendeck presented accurately.
Delicate deck with fine detil is realistically produced.
Commander's hatches can be opened or closed.

​The bottom of the box continues with 17 more of these white illustrations on black background: 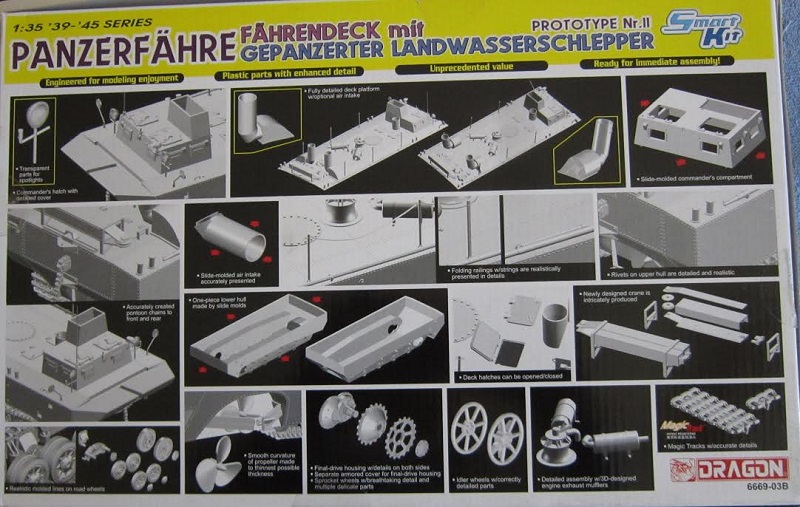 WHAT'S IN THE BOX.

This kit holds 15 medium grey parts trees. However, the parts trees illustrations show only 8 of these trees. This is because some of the trees have two sections to them and these trees are in 2 identical trees. The two sections are seperate in the kit. Parts are in 10 sealed cello bags.
The kit also holds a clear parts tree, a brass PE fret, a length of white string, the decal sheet and the instructions.

Page 1 of the instructions begins with a black and white repeat of the box art, followed by the parts trees illustrations. Some trees in these illustrations are illustrated showing parts on them shaded-out in blue. This means they are excess and not needed to complete the kit.

Page 2 begins with CAUTIONS about the kit in 6 languages, including English, international assembly symbol explanations and a listing of GSI Creos Corp, Mr. Color and Model Master brands of hobby paints suggested to use to complete the model, in the same languages.

At the bottom of the page are the first 3 assembly steps.

Page 3 through 5 give a grand total of 12 assembly steps.

Page 6 has a single 5-view for marking and painting the ferry and pontoon road deck. The ferry and deck are overall panzer grey. The road deck has a wood colored top. The sides are called out to be sandy brown, but the box art and side panel shows them panzer grey.

There is a long pole with a hook on the end of it on the deck of the ferry that gets red and white stripes along it's length. The muffler is to be burnt iron color and the air intakes and wench assembly light grey.

There are 2 identical medium grey letter A parts trees. These are split into 4 sections. They hold the idler wheels, drive sprockets, return rollers, bogies, tow cable ends etc. The larger sections hold 79 parts and the smaller sections 38 parts each) 4 parts are blued out and excess.

These suspension and wheels are Pz.Kpfw. IV type. 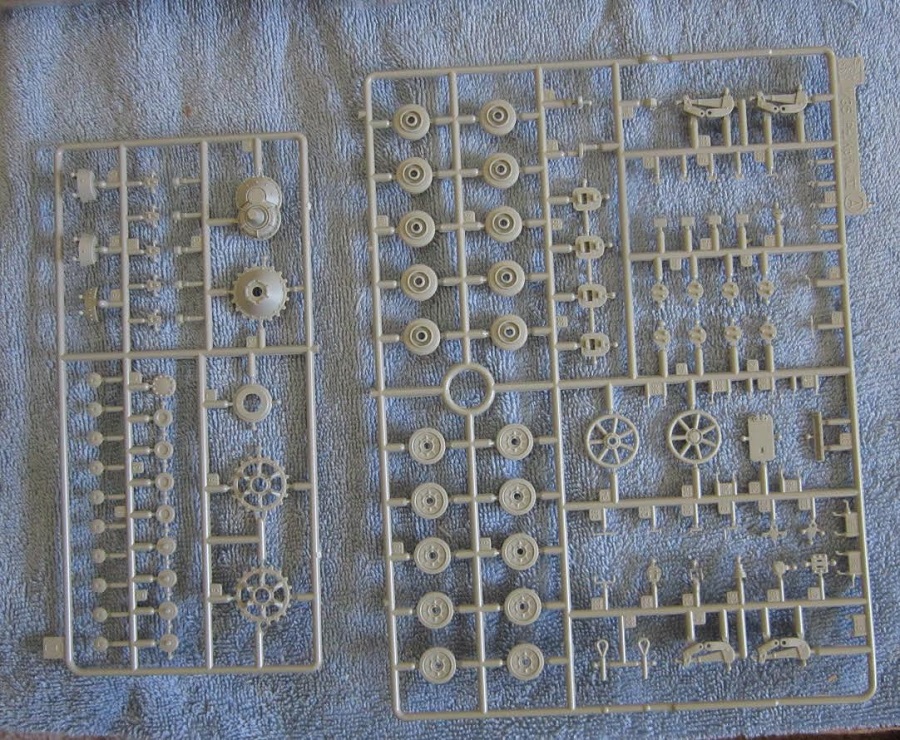 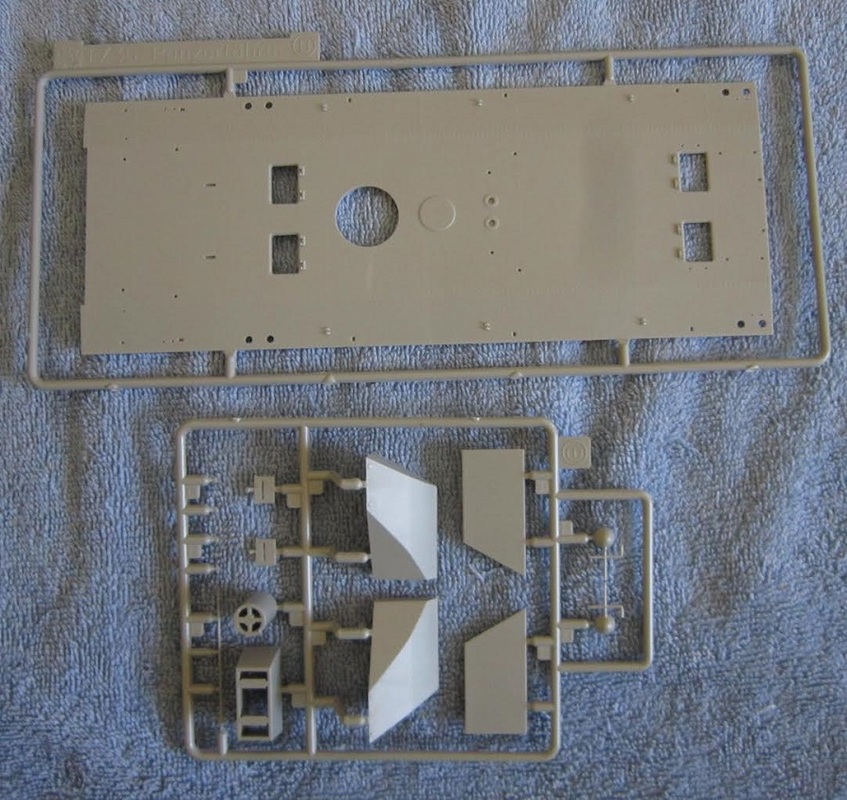 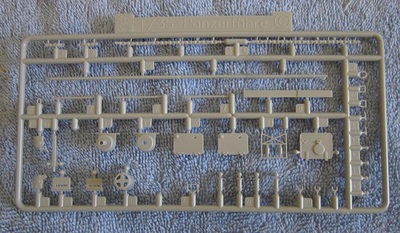 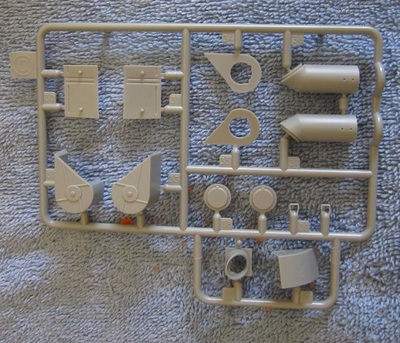 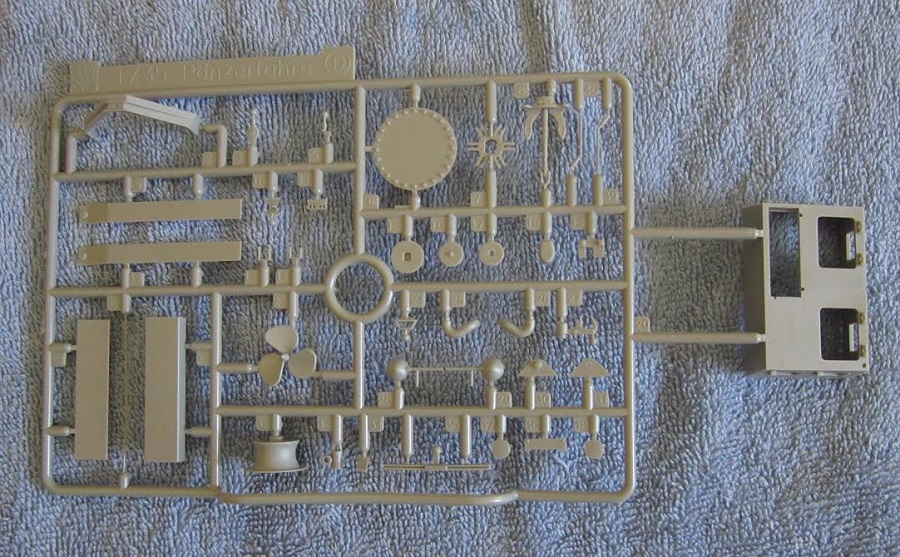 ​Letter E tree is the clear one. It holds window panes and light lenses (9 parts) 1 part is excess. 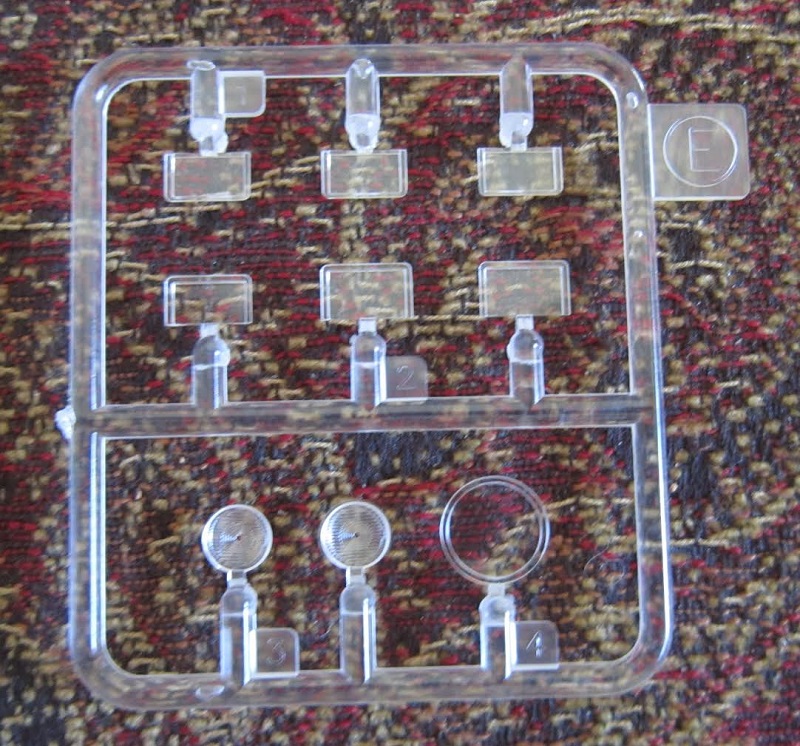 There are 2 identical medium grey letter E trees. They each hold the road raft deck and sides (5 parts each) 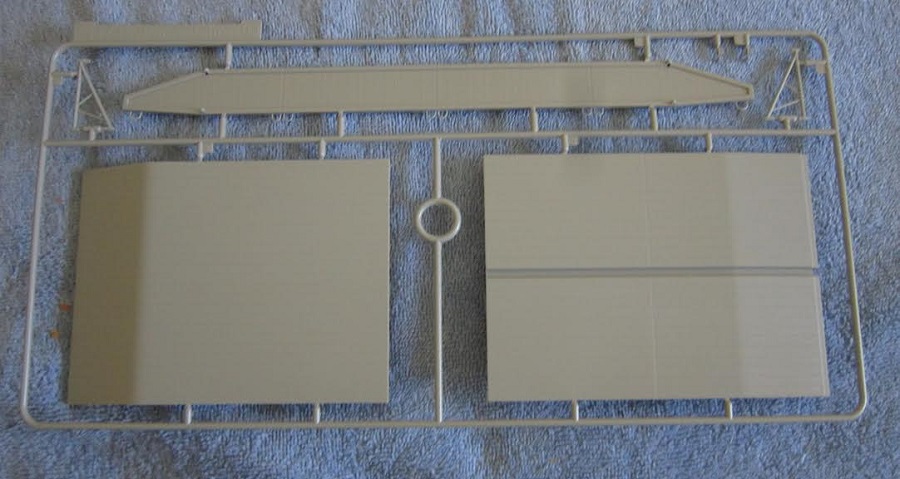 ​Letter MA is the brass PE parts. The fret holds rope railing end rings (22 parts)
The length of white string is to be used to fabricate the rope railings for the sides of the ferry. 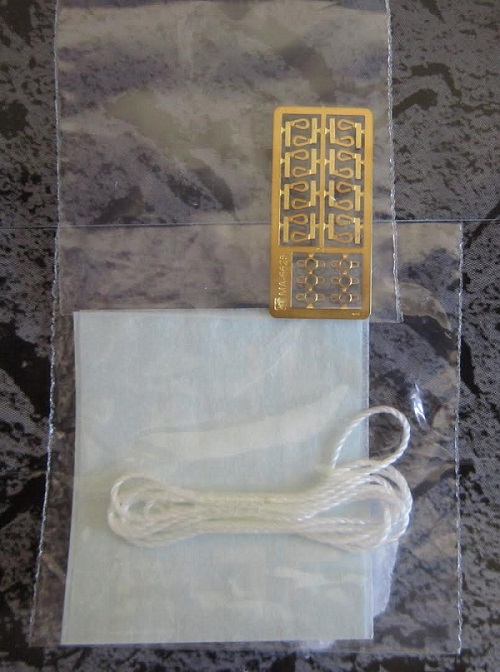 ​The Magic Tracks come in right and left units of 108 links per side. These are Pz.Kpfw. IV links.
​The tracks (dark gray left, light gray right) as well as two curious lengths of chain at the front and rear of the hull. The tracks appear to be the earlier 38 cm tracks and lack traction cleats. 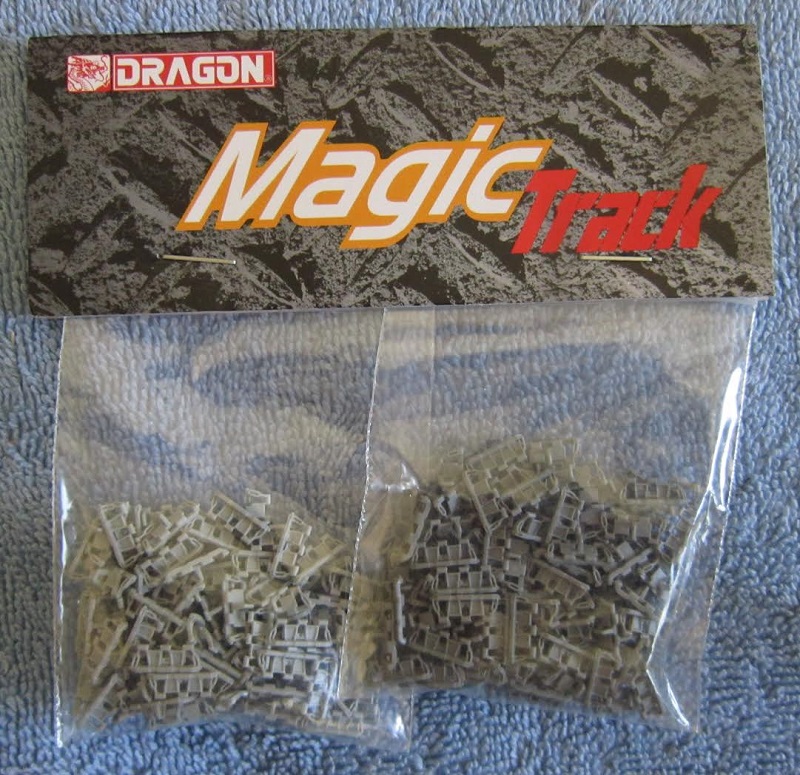 ​DML has now released the second part of this two-part model and this selection also comes with the dedicated floating pontoon with decking which makes the two units into a self-propelled ferry.

The second prototype differs from the first in some of its details, such as having three fixed vents on the deck versice the four folding vents with the first prototype as well as a hatch and combing on top of the casemate for the ferry commander.

Like its predecessor, other than the road wheel sets from its line of Pzkw. IV kits, DML's ferry is new from the ground up.

The kit comes with a foam bumper over the mounting bracket for the vehicle's tow hook. Which is a nice way to protect a fragile bracket.

Assembly is like that of the tank kits and begins with the suspension. It then moves to the propeller and propeller guard (I profess ignorance of the vehicle, for it seems to lack a rudder so I have no clue how it was steered!

The deck and casemate are next, and while they all come with separate hatches there is zero interior anywhere on the model to show by leaving them open. The armored flaps on the front of the casemate may also be positioned.

The three vent stacks come next, and this kit offers an option between fixed stacks and the folding ones used on the first prototype. However, where they may be folded down for travel on the original the kit only provides for them to be shown in the up or operating position. With some work they can apparently be folded down.

The winch and crane are next and neither one may be shown in any position but stowed.
Step 9 covers general assembly and adding the false bow (flotation chambers) before attaching the deck.

Note that there are a number of holes that must be drilled out during construction. Also this kit came with an addendum that notes if you leave the armored flaps open you need to cement the clear styrene windows into the openings from the inside.

The nylon line is used on this kit for the handrail stanchions and is not part of the winch or any tow cable.

Steps 10-12 cover the assembly and rigging of the decked pontoon.

Note that the chains at the front and rear must be bent to attach to the pontoon.

Also, and a major word of caution, the design apparently was that the pontoon has to float on its own and is only held to the Panzerfaehre vehicles for propulsion and control.

This is not a rigid mounting at all and as such it means if a complete ferry is modeled it will have to be on a solid base with fixed attachment.

Given the size of the kits and parts the base will have to be at least 12" x 18", so figure that accordingly.

Finishing directions are provided for Prototype II in the hands of an unknown unit (probably either the factory or a weapons/engineer test range).

A set of white crosses are provided on a Cartograf sheet.

Overall this is again a nice model, but now the costs come into the picture.

This kit looks to be very detailed. However, I think the kit should have had some crew figures included also for the price asked.

I bought my kit at 40% off at the only hobby shop in my city that plans on going out of business on June 25th. I will sorely miss them.

I want to credit Cookie Sewell and thank him for allowing me to use the history information and comments about the parts from his review of the kit that he did.