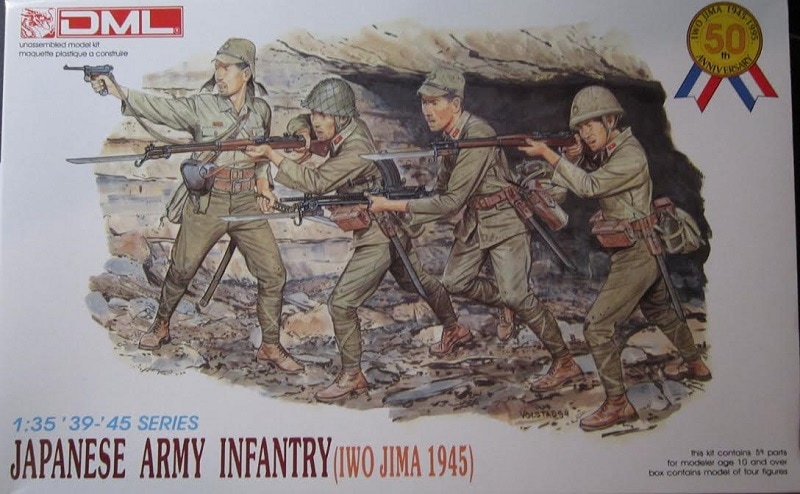 The box art shows 4 Japanese infantry men defending the mouth of a cave. They are all standing.
They all wear light khaki uniforms. Their pants are bloused into gators that are wrapped in cross straps over low shoes.

The man on the right wears a steel helmet with a cloth cover on it. He is armed with a Arisaka Model 99 rifle with a bayonet attached to it and is holding it up firing it. He has a water bottle, canvas sack, the bayonel scabbard and an ammo pouches on his belt.

The next man wears a soft cloth billed field cap. He is armed with a light machine gun Model 99 and is aiming it.

He has a canvas sack, a bayonet and ammo cases on his belt.

The third man wears a steel helmet with a mesh cover on it. He is armed with a Arisaka Model 99 rifle with the bayonet attached and is aiming it. He carries the same load on his belt that the 1st man does.

The fourth and final man appears to maybe be an officer, due to him having a samurai sword on his belt and a pistol holster. He has a canvas bag slung on his back. He is aiming a Nambu Taisho semi-automatic pistol with his right hand and holds the sword out of its scabbard in his left hand. He has a soft cloth billed cap with ear flaps on his head.

One corner of the box art has a badge that commemorates the 50th anniversary of the battle of Iwo Jima 1945-1995. Another corner says that the kit is designed for modelers over the age of 10 and that it holds 59 parts.

​
The other side panel says the kit contains parts for four figures and glue and paint are not included. This is followed by the copyright of the kit of 1995 and DML's street address in Hong Kong, China, their FAX number and MADE IN CHINA. 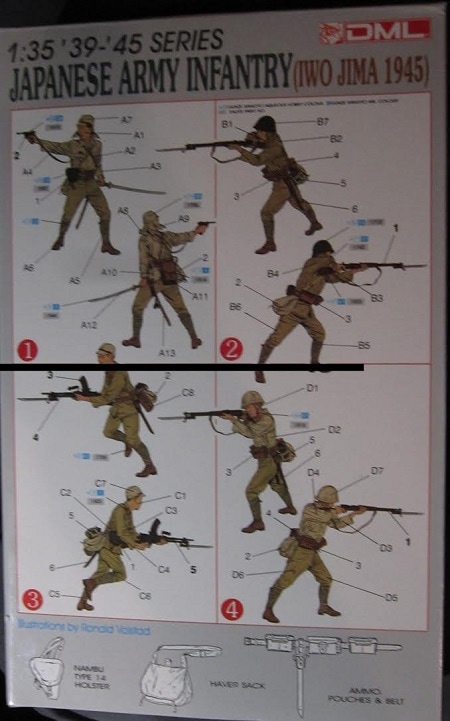 ​There is a 2-view in color of each of the figures. Below them there are black and white line
drawings of a Nambu type 14 pistol holster, a haver sack and ammo pouches on a belt.

All the illustrations are done by DML's resident artist Ronald Volstad.
​WHAT'S IN THE BOX:

The large light-grey tree holds: the parts of the figures (divided into seperate heads, torsos, arms and legs), a samauri sword and it's scabbard, a canvas bag, 4 canteens, 2 steel helmets (one with a cloth cover and one with a mesh cover), a soft field cap with bill, 3 bayonet scabbards, 6 ammo cases, 4 ruck sacks, 2 Nambu pistol holsters and a soft field cap with bill and ear flaps. (53 parts) 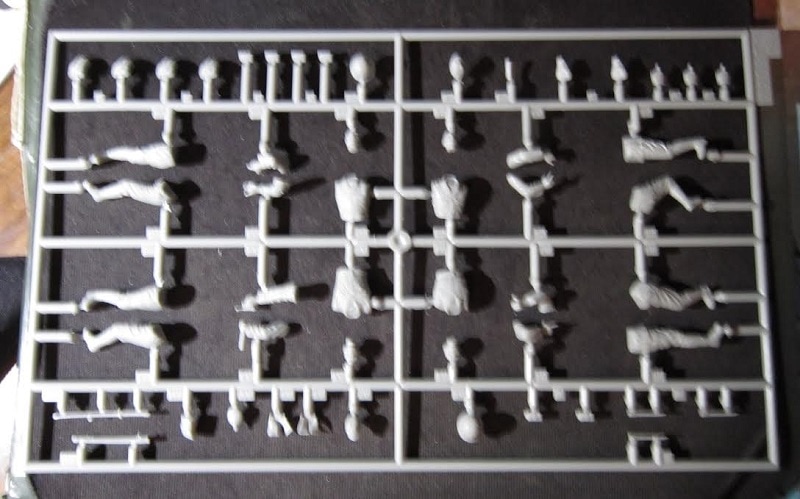 ​These figures are very well detailed and in poses that will make into a neat diorama. There are no decals in the kit.
​I purchased my kit back in the 90's at my local hobby