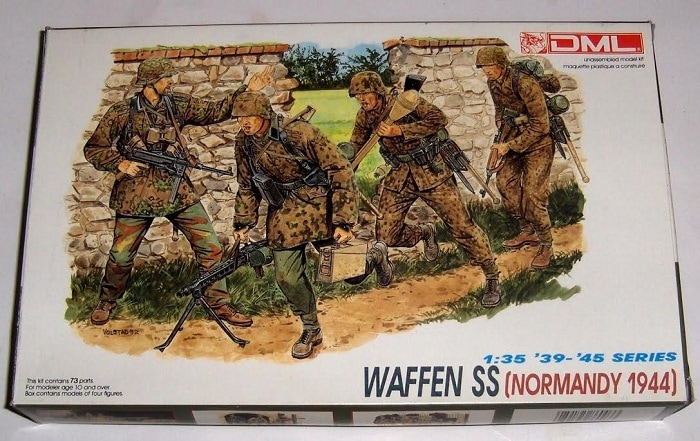 The Waffen-SS (German Armed SS) was the armed wing of the Nazi Party's SS organisation. Its formations included men from Nazi Germany, along with volunteers and conscripts from both occupied and un-occupied lands.

The Waffen-SS grew from three regiments to over 38 divisions during World War II, and served alongside the Heer (regular army), Ordnungspolizei (uniformed police) and other security units. Prior to the war, it was under the control of the SS Führungshauptamt (SS operational command office) beneath Reichsführer-SS Heinrich Himmler. With the start of World War II, tactical control was exercised by the High Command of the Armed Forces (OKW),[3] with some units being subordinated to Kommandostab Reichsführer-SS (Command Staff Reichsführer-SS) directly under Himmler's control.

Initially, in keeping with the racial policy of Nazi Germany, membership was only open to people of Germanic origin (so-called Aryan ancestry). The rules were partially relaxed in 1940, and later the formation of units composed largely or solely of foreign volunteers and conscripts was authorised. These SS units were made up of men mainly from among the nationals of Nazi-occupied Europe. Despite relaxation of the rules, the Waffen-SS was still based on the racist ideology of Nazism, and ethnic Poles (who were viewed as subhumans) were barred specifically from the formations.

At the post-war Nuremberg trials the Waffen-SS was judged to be a criminal organisation due to its connection to the Nazi Party and involvement in numerous war crimes and crimes against humanity. Former Waffen-SS members were denied many of the rights afforded to the military veterans. An exception was made for Waffen-SS conscripts, who were exempted because they were not volunteers. About a third of the total membership were conscripts.

Operation Overlord, the Allied "D-Day" landings in Normandy, took place on 6 June 1944. In preparation for the expected landings the I SS Panzer Corps Leibstandarte SS Adolf Hitler was moved to Septeuil to the west of Paris in April 1944. The Corps had the 1 SS Leibstandarte SS Adolf Hitler, 12 SS Hitlerjugend, the 17 SS Götz von Berlichingen and the Army's Panzer-Lehr-Division divisions assigned to it. The Corps was to form a part of General Leo Geyr von Schweppenburg's Panzer Group West, the Western theatre's armoured reserve. The Corps was restructured on 4 July 1944 and only the 1 SS Leibstandarte and the 12 SS Hitlerjugend remained at strength.

After the landings, the first Waffen-SS unit in action was the 12 SS Hitlerjugend, which arrived at the invasion front on 7 June, in the Caen area. The same day they committed the Ardenne Abbey massacre. The next unit to arrive was the 17 SS Götz von Berlichingen on 11 June, which came into contact with the 101st Airborne Division. The SS Heavy Panzer Battalion 101 arrived next to protect the left wing of the I SS Panzer Corps. The 1 SS Leibstandarte arrived towards the end of the month with lead elements becoming embroiled in the British offensive Operation Epsom.
The only other Waffen-SS unit in France at this time was the 2 SS Das Reich, in Montauban, north of Toulouse. They were ordered north to the landing beaches and on 9 June were responsible for the Tulle massacre, where 99 men were murdered. The next day they reached Oradour-sur-Glane and massacred 642 French civilians.

The II SS Panzer Corps consisting of the 9th SS Hohenstaufen and 10th SS Frundsberg divisions and the SS Heavy Panzer Battalion 102 was transferred from the Eastern Front to spearhead an offensive to destroy the Allied beachhead. However, the British launched Operation Epsom and the two divisions were fed piecemeal into the battle, and launched several counterattacks over the following days.

Without any further reinforcements in men or materiel, the Waffen-SS divisions could not stop the Allied advance. 1 SS Leibstandarte and 2 SS Das Reich took part in the failed Operation Lüttich in early August. The end came in mid August when the German Army was encircled and trapped in the Falaise pocket, including the 1 SS Leibstandarte, 10 SS Frundsberg and 12 SS Hitlerjugend and the 17 SS Götz von Berlichingen, while the 2 SS Das Reich and the 9 SS

Hohenstaufen were ordered to attack Hill 262 from the outside in order to keep the gap open.[109] By 22 August the Falaise pocket had been closed, and all German forces west of the Allied lines were dead or in captivity. In the fighting around Hill 262 alone, casualties totalled 2,000 killed and 5,000 taken prisoner. The 12 SS Hitlerjugend had lost 94 per cent of its armour, nearly all of its artillery, and 70 per cent of its vehicles. The division had close to 20,000 men and 150 tanks before the campaign started, and was now reduced to 300 men and 10 tanks.

With the German Army in full retreat, two further Waffen-SS formations entered the battle in France, the SS Panzergrenadier Brigade 49 and the SS Panzergrenadier Brigade 51. Both had been formed in June 1944 from staff and students at the SS-Junkerschule. They were stationed in Denmark to allow the garrison there to move into France, but were brought forward at the beginning of August to the area south and east of Paris. Both Brigades were tasked to hold crossings over the Seine River allowing the Army to retreat. Eventually they were forced back and then withdrew, the surviving troops being incorporated into the 17 SS Götz von Berlichingen.
THE KIT:

This kit comes in a shrink-wrapped end-opening type box. I am no fan of this type of box as invariably parts or the decal sheet will find their way past the end flaps to become lost. Give me a tray and lid type box any day of the week.

The box art shows a group of SS infantrymen advancing behind a stone wall. An officer is bringing 3 men forward. Two men are running and the third man is paused.

All wear steel helmets with cammo covers. The officer wears a camouflaged smock and field grey trousers that are loose at the bottom above his shoes. He carries a MP40, binoculars and field equipment.

The lead soldier next is running. He is similarly dressed like the officer, but his pants are bloused into putties. He is armed with a MG42 machine gun with a bipod on it and carries an ammo box for the MG42. He has full field equipment, including a pistol holster.

The second soldier is also running. He wears a cammo smock and cammo trousers bloused into putties. He has full field equipment and a 98K Mauser carbine slung over his back. He is carrying a panzerfaust and round grenades on his belt.

The fouth paused soldier wears a cammo smock and cammo trousers too, that are also bloused in putties. He has full field equipment and is armed with a 98K.

One side panel has 3 color box arts of other kits that DML markets:

An odd white sticker is next that says "Consignment, model kit group 2, opened - unopened boxes, $5.00". What this all means is beyond me?

The other side panel says the kit contains parts for 4 figures. Paint and glue are not included, in 6 languages including English.

This is followed by DML's stree address in Hong Kong, China, their FAX number, the copyright date of the kit as 1993 and MADE IN HONG KONG.

The bottom of the box serves as the assembly and painting instructions in full color. It has four 2-views that cover the four figures. Also included are color swatches of 2 types of uniform camouflage. Below this is a black and white illustration of a P38 pistol holster, 98K Mauser carbine ammo pouches and a folding spade and its canvas pouch. 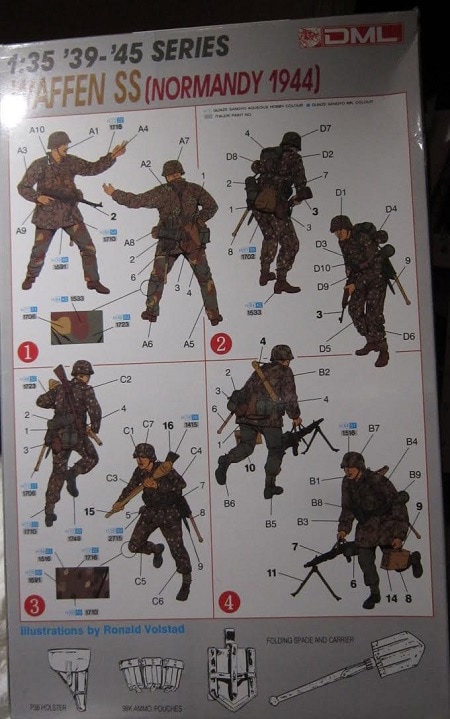 This kit contains a large light tan parts tree and a small light grey tree in 2 sealed cello bags.
The small tree in its bag is inside the large bag with the tan tree. 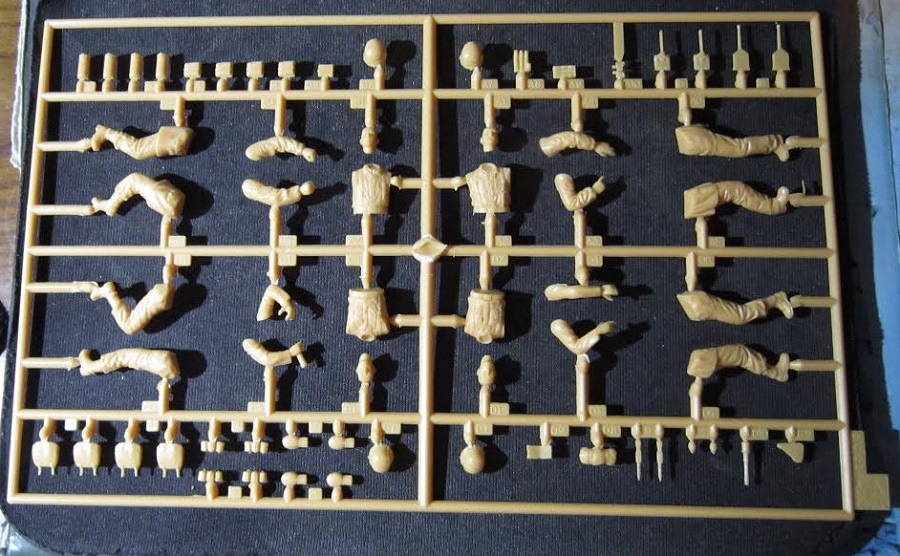 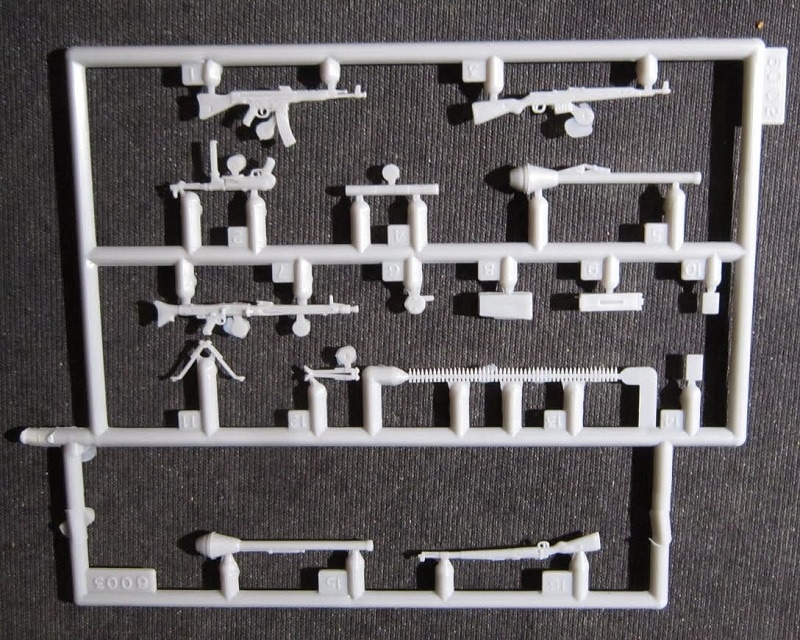 This is a neat older kit. I like the action poses.
​I won this kit in a raffle at a recent IPMS contest I attended.