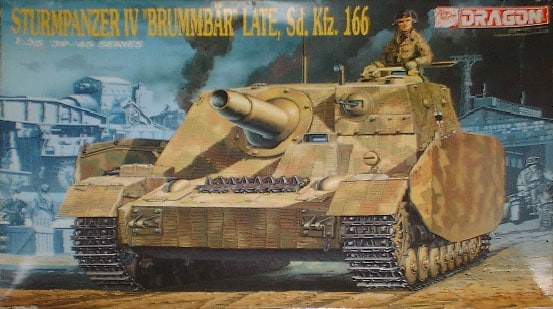 The heavy street fightings around Stalingrad in late 1942 showed the urgent need for a heavy armored support vehicle, armed with a howitzer able to fire high explosive shells or great caliber. The HWA (Heereswaffenamt-Army Ordinance Office) demanded that this gun should be able to destroy whole buildings with one or two shots. Due to strict orders from Hitler and the HWA, an interim solution was to be produced in a very short time.

These vehicles were nothing more than damaged Stug III hulls, which were fitted with sIG 33 heavy infantry guns under a box-like casemate. Although the tactical concept proved to be efficient, the limits of the Pz.Kpw. III hull were exceeded. After 24 of these vehicles (designated as 15cm Sig Auf. Pz.Kpfw. III) had been built, the basic design was changed. Due to the urgent requirement for a street-fighting vehicle, Hitler himself ordered construction of a successor model immediately.

The new assault tank used the Pz.Kpfw. IV hull, which was now the standard German MBT. Although the gun was completely redesigned by the Czech firm of Skoda, the 15 cm Sturmhaubitze 43 used the same ammunition as the sIG 33.

The first 15cm Sturmpanzer 43s were delivered in April 1943, they were used at the Eastern Front with great success. Subsequently these vehicles were called “Brummbar” or roaring grizzly by the troops.

During production many improvements and simplifications were introduced. While early Sturmpanzer 43s originally had no close-defense weapon, final production vehicles showed a machine gun in the armoured bay. Due to the excessive weight the standard rubber-rimmed running wheels were replaced by resilient steel wheels, similar to those on the Soviet KV heavy tanks.

More than 300 Sturmpanzer IV “Brummbar” were built up till the end of the war, and although they were a steady problem for recovery and maintenance units, they proved to be very effective weapons in the close support role.
​THE KIT:

DML Dragon is an old prolific model company, based in Hong Kong, China. They manufacture all manner of model subjects in the popular scales.

The box art shows a Brummbar parked  next to a German Karl-Great 60cm heavy mortar. Behind it there is a building with a German motorcycle rider emerging and 3 more intantry-men around the mortar.

The Brummbar is in a wave pattern of earth yellow, dark-green and red-brown with the German cross on its sides. The mortar is overall Panzer-grey. The commander of the Brummbar is looking out the top hatch. He wears a tan uniform over a black shirt, has a black cloth side cap and earphones on his head.

One side panel of the box has one paragraph histories of the Brummbar in 6 languages, including English. Followed by Marco Polo Import Inc.s street address in City of Industry, CA. They were the U.S. importer and distributor for DML Dragon kits in the 90’s. Their FAX number is provided. The copyright is 1994 and the kit was made in Hong Kong, China.

​The other side panel has 3 color walk-around type photos of the model made up. Followed by Marco Polo’s address and FAX number, the copyright date and made in Hong Kong, China repeated.

The instructions consist of a single-sheet that accordion folds out into 8 pages in 14” x 8” page format.

Page 1 begins with a black and white repeat of the box art, over the history of the Brummbar in 6 languages, including English.

Page 2 begins with ATTENTION about the kit, over international assembly symbol explanations and a suggested paint color listing of Gunze Sangyo and Italeri brands of hobby paints in the 6 languages.

Below is a black and white photo of the model made up, over the 1st assembly step.

Page 3 through 6 gives a balance of a grand total of 13 assembly steps.

Page 7 is a painting and marking guide, showing a 5-view of the Brummbar in the box art scheme. It is shown as it was with Sturmpanzer Abteilung 217, 6th Panzer-Armee, Ardennes 1944.

Page 8 has the parts trees illustrations above decal application instructions in the 6 languages, including English.

Some parts are shown shaded out. Meaning they are excess and not needed to complete the model. 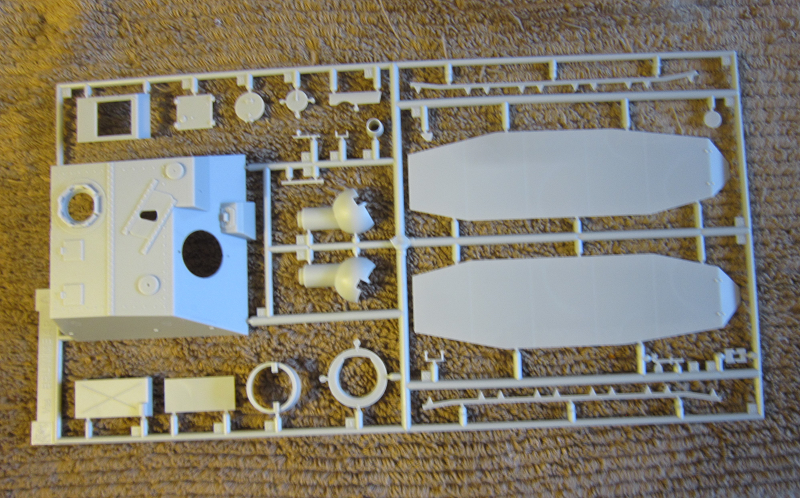 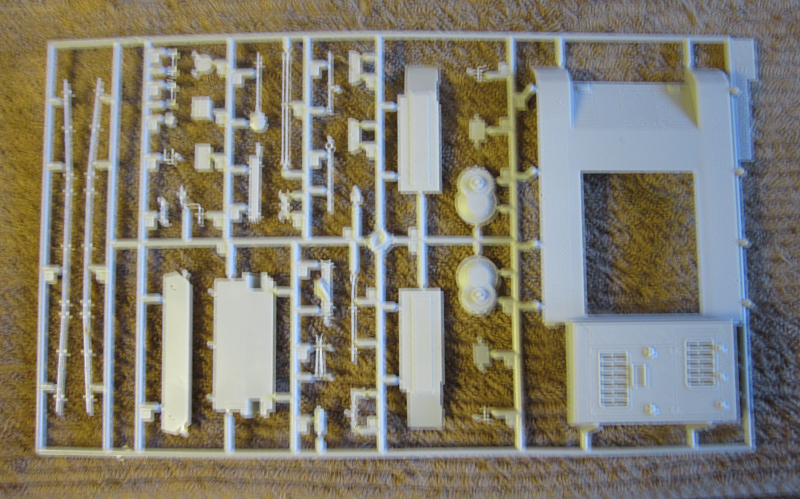 ​There are 2 identical medium-grey letter C trees. They hold: road wheels, drive sprockets, idler wheels, bogies etc. (31 parts each) 23 of these part are shaded out as being excess.
They are co-joined to the D, E & G trees.

There are 2 identical medium-grey letter E trees. They hold return rollers and spring units (16 parts each) and co-joined to trees C, D & G. 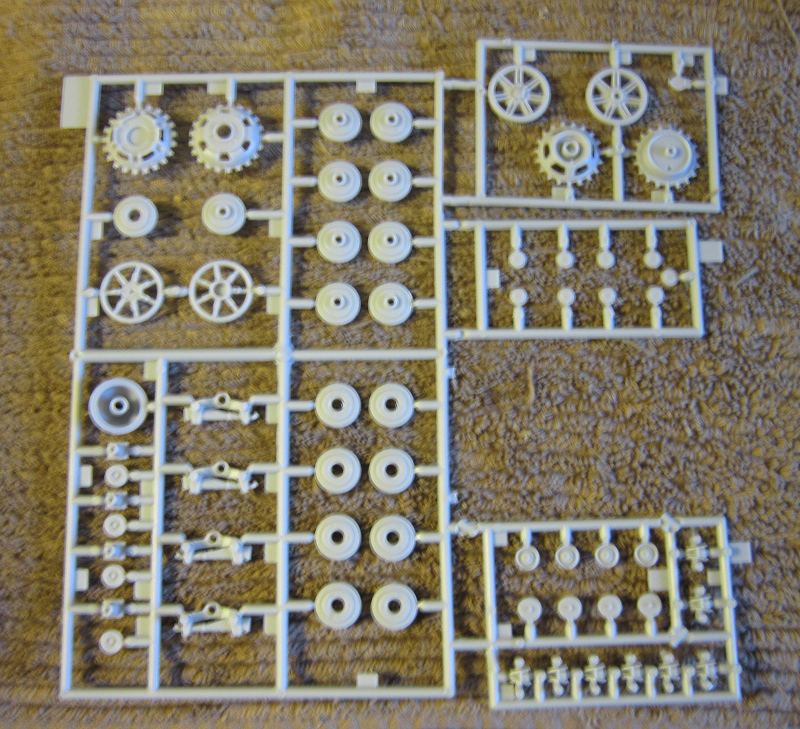 ​There are 3 black letter I trees. These are the individual track links. (84 parts each) 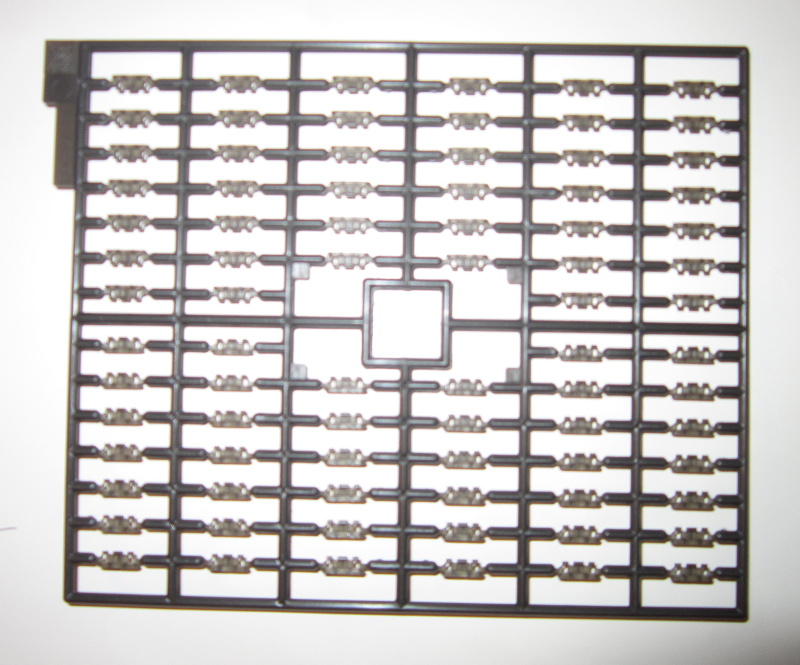 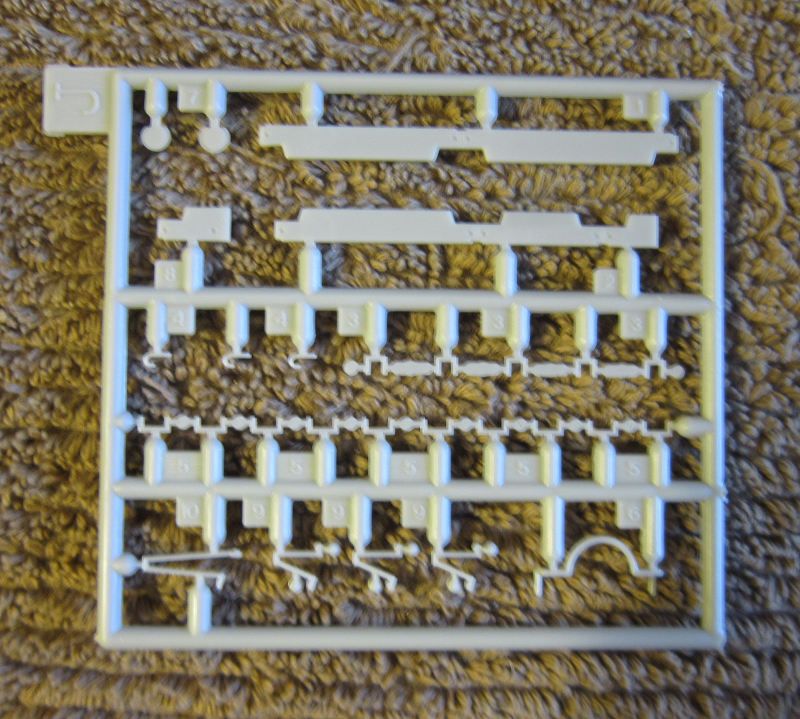 ​Next is the decal sheet and the steel PE fret. The fret is in a sealed cello with a stiff white card to prevent it bending. 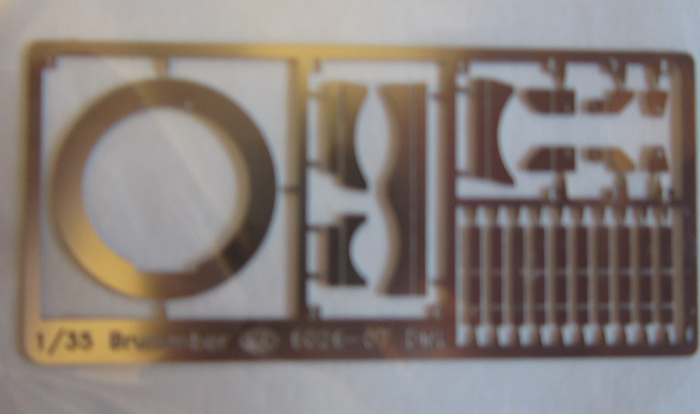 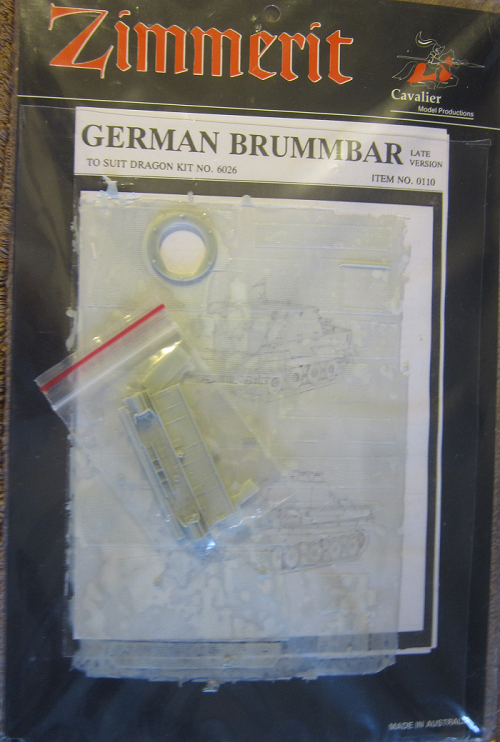 Nice external detail, but no interior details or clear parts or crew figures.